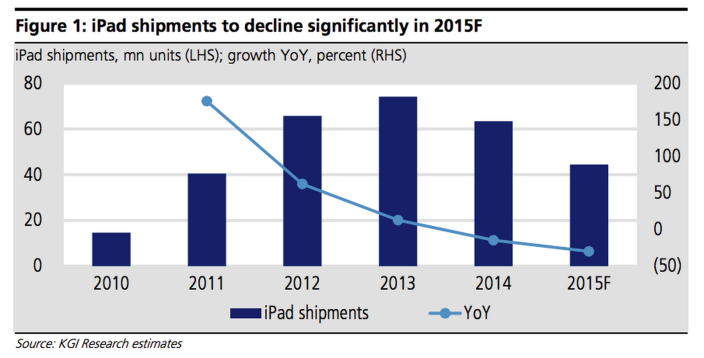 A new report from KGI out today predicts iPad sales this year will drop by around 30% marking the biggest decline in the history of the device. That 30% decline year over year compared to 2014 means KGI predicts Apple will sell 44-45 million units during 2015.

The decline in iPad sales has already started, according to estimates from KGI, with the firm predicting shipments in Q1 and Q2 of this year will drop by over 50%. More specifically, KGI says iPads will see a 52.7% QoQ in Q1 2015 with sales of 10.1 million iPads and a another 30-40% drop in Q2 2015 with 7.8 million units. Compare those numbers with the 21.4 million iPads Apple sold just last quarter alone during the holiday season.

KGI adds that while it’s “confident that the expected 12.9-inch iPad model can create an improved user experience,” it doesn’t expect the device to “contribute meaningfully to shipments momentum anytime soon.”

Contribution to shipments of 12.9-inch debut limited; retail promotion of existing models may not work well. While we are confident a new 12.9-inch iPad model can create improved user experience with enhanced productivity in the long term, we don’t anticipate it will contribute meaningfully to shipments momentum anytime soon, since its commercialization may fall behind expectations, leaving limited time for shipping… Moreover, we are conservative on promotion, likely executed by Apple (US) or retailers, of existing products due to the lack of innovative applications.

For some perspective, IDC reported earlier this month that Apple remained atop the worldwide tablet market in 2014. It did, however, slowly losing share to smaller, mostly Android competitors as the overall tablet market grew, according to IDC’s data. It’s certainly not the first time a potentially declining tablet market has been a topic of conversation for Apple watchers, but CEO Tim Cook has consistently defended the product line citing new opportunities for growth going forward including Apple’s new partnership with IBM to grow iOS device adoption in the enterprise.

As a result of the decline in iPad sales, KGI is predicting several Apple suppliers will take a hit due to the slump in iPad sales.