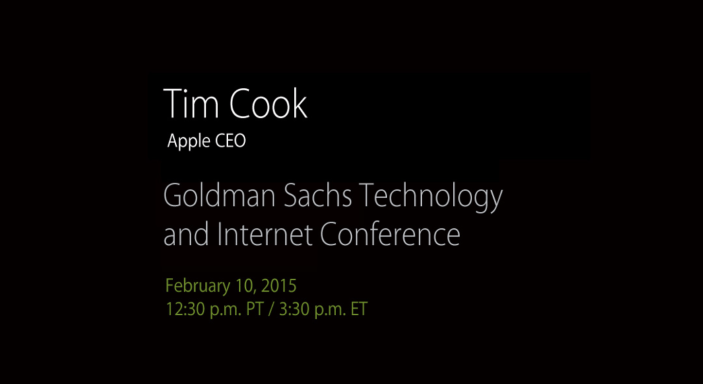 Tim Cook will speak at the Goldman Sachs Technology and Internet Conference, starting later today. Apple will offer live audio of Tim Cook’s section of the conference. It is unclear how Tim Cook will feature at the event, whether it is an interview or a predefined talk. In previous years, Cook has generally discussed the state of Apple and the wider industry in a loose interview format. You can listen to the live audio here at 12:30 PM Pacific Time.

Cook has spoken at the Goldman Sachs conference for the last two years, in 2013 and 2012. Although it is unlikely Cook will talk about anything particularly shocking, he has dropped hints in previous years about upcoming projects — like vague comments about the future of Apple TV. It is reasonable to expect some mention of Apple Watch, due for release in April.

As the event is hosted by Goldman Sachs, topics of conversation may also include Apple’s capital returns program and share buyback scheme, which have been somewhat controversial with vocal investors.