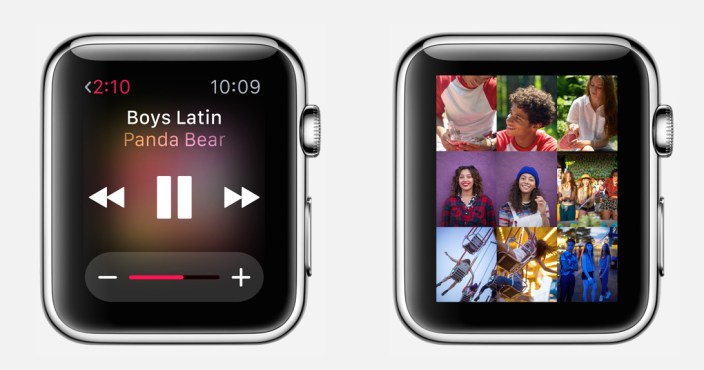 In our report last week, we reported that internal models of the Apple Watch included 8 GB of storage. We have now confirmed with the company that the shipping units do indeed ship with an 8 GB storage capacity. However, there are some important limitations.

As a user, you are only allowed to use a subsection of that total space for certain types of data. As confirmed with Apple, users are only allowed to store up to 2 GB of music on the Watch and up to 75 MB of photos for the Photos app. Note that all three collections — Sport, Watch and Edition — feature the same 8 GB memory capacity.

The locally-stored music and photos can then be played or viewed independent of an iPhone. For instance, when going for a run, you can leave your iPhone at home and listen to 2 GB of music on your journey.

2 GB of music equates to approximately 200 decent quality music tracks, so the Watch is not going to be a straight up iPod replacement when untethered. Obviously, when paired with the phone, you can listen to your entire music library streaming over Bluetooth. What songs are synced is managed by the Apple Watch companion app on the iPhone, that ships with iOS 8.2.

The 75 MB limit on Photos appears restrictive, but the company has made clear that it only wants you to store your favorite snaps on the Watch itself (managed automatically by iCloud Photo Library). Also note that the Watch will automatically resize images when imported so that they take up much less room than the original stills, optimized for display on the screen of the Apple Watch. A very rough estimate indicates that you will be able to hold over 100 photos in the 75 MB of allocated local storage.

Obviously, this leaves around 6 GB of other space seemingly unaccounted for. It is likely that a few gigabytes of that remaining capacity will be taken up by the system’s OS and internal apps leaving a decent chunk of space for miscellaneous data like settings and application caches, which help speed up the overall experience of using the device.

In the future, when a native SDK arrives, as Apple has already announced it is coming, this space will also be used to store the application binaries and resources. For the time being, resources for apps on Apple Watch are almost entirely stored on the paired iPhone and transmitted temporarily to the Watch when the app is in use.