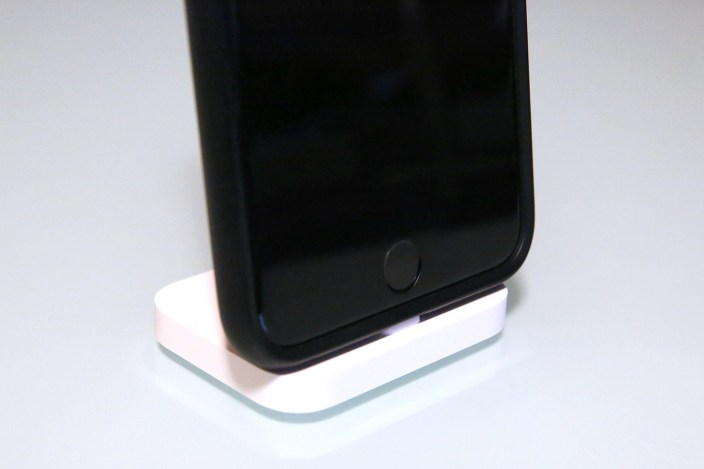 Four years ago, I wondered why Apple sold such seemingly simple plastic docks for $29, so I cut two of them in half to see what was inside. I was impressed: in addition to a larger-than-expected collection of electronic components, they were filled with substantial zinc plates that kept Apple’s devices standing safely upright, no easy feat since the docks kept shrinking every year. The only problem: most (but not all) of Apple’s docks have been model-specific and case-unfriendly, issues that were particularly pronounced in the official iPhone 5s Dock and iPhone 5c Dock. When Twelve South released the handsome multi-device and case-compatible HiRise and HiRise Deluxe, many people — including me — had no need for a more limited, Apple-designed alternative.

Somewhat belatedly, Apple has just released the iPhone Lightning Dock ($39), its first docking solution for the iPhone 6 and 6 Plus. It’s not clear why Apple took its time releasing this accessory, which uncharacteristically has a 2014 date on the back of its box. But it’s the dock Apple should have released three years ago, delivering case compatibility, multi-device support, and the expected Apple minimalism. It has no back support for your iPhone, instead relying on a stiffened and modestly padded Lightning connector to hold your device on the traditional Apple light recline. And it also includes an audio-out port, which has been absent from all of its third-party rivals. Now that Apple has released the right sort of dock, should you consider buying one?… 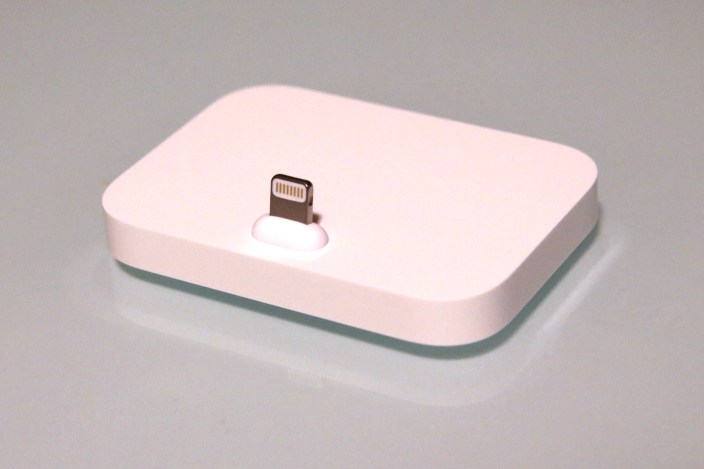 Unlike its earlier Lightning docks for iPhones, Apple has pared down the iPhone Lightning Dock to the barest essentials. Made mostly from glossy white plastic, it has a gray rubber bottom with an embossed Apple logo, just like past iPad, iPhone, and iPod docks. But there’s notably no recessed “well,” front lip, or other support for the device besides the strength of the Lightning plug that sticks up from the roughly 2.6″ by 1.9″ by 0.3″ glossy plastic base.

Defying Apple’s past Lightning accessory guidelines, which called for a surrounding support platform roughly as large as the abandoned Dock Connector plug — an unnecessary design requirement that helped to kill the third-party Lightning accessory market — the integrated Lightning connector’s soft plastic base measures a mere 12 millimeters in width and 6 millimeters in depth. Though it will come as no surprise to users of third-party docks that have depended on elevated Apple cables to achieve the same function, this nub simultaneously enables the Lightning plug to connect with and support encased devices. Since nearly 80% of iPhone owners use cases, many people will consider this to be a welcome improvement. 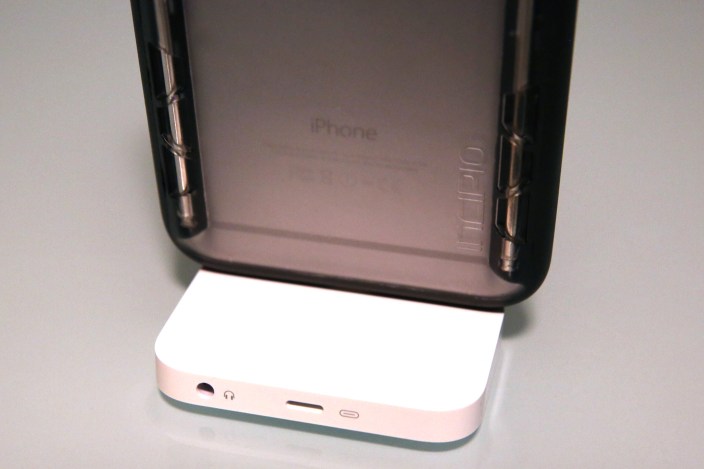 The iPhone Lightning Dock has one arguable advantage over third-party rivals. In addition to a pass-through Lightning port on the back, which you use to connect a cable for syncing and/or charging, there’s a 3.5mm audio port labelled with a headphone icon. A quick check of the included manual shows that the port is intended for “an Apple headset,” and apparently is the reason the iPhone Lightning Dock requires at least iOS 8 to work fully. Testing confirms that the port — like the ones in most of Apple’s recent docks — mirrors the connected iPhone’s own headphone port, adjusting volume upwards and downwards rather than staying fixed at peak output. I call the advantage “arguable” only because Twelve South worked around this by providing ample room to connect headphones or an audio cable directly to the device rather than adding another port to HiRise’s back; depending on whether you’re connecting headphones or speakers to your iPhone, Apple’s design may or may not be more convenient.

Just how iPhone-agnostic is the iPhone Lightning Dock? Officially, Apple says that it’s compatible with the iPhone 5, 5c, 5s, 6, and 6 Plus, as well as the fifth-generation iPod touch. But in my testing, it also worked flawlessly with the iPad Air, iPad Air 2, and iPad minis for charging and syncing, even when any of these models was inside of a case such ZeroChroma’s excellent Folio-Slide (shown above). The iPhone Lightning Dock was only unable to connect to cases with really thick bottoms, and only began to tip over with iPad Airs inside multi-layer ruggedized cases, or when Air-sized iPads were tapped in the middle of their screens or higher. This bodes well for compatibility with future iPhones, no matter how large they may be, so long as they continue to have Lightning ports.

Given its pleasant design and multi-device support, the only potential deal-breakers with the iPhone Lightning Dock are its price point and limited incompatibility with certain cases. Apple has for some reason jacked the price up to $39 from the $29 it charged for the iPhone 5c and 5s Docks. This makes the iPhone Lightning Dock more expensive than the metallic Twelve South HiRise, which similarly requires you to supply your own Lightning cable, but comes in silver or black versions. By comparison, the silver, black, or gold HiRise Deluxe includes its own cables and is designed to adjust to various case thicknesses and depths, while selling for roughly the same price as an iPhone Lightning Dock plus an official Apple Lightning Cable. I’d personally pick one of the HiRises over the iPhone Lightning Dock, but if you prefer Apple’s design, it’s a good enough option to broadly recommend.

Meanwhile, you can buy a very nice JBL OnBeat Lightning dock with a great speaker for $30. http://t.co/hGl7HLAkua pic.twitter.com/U61STzi2E1