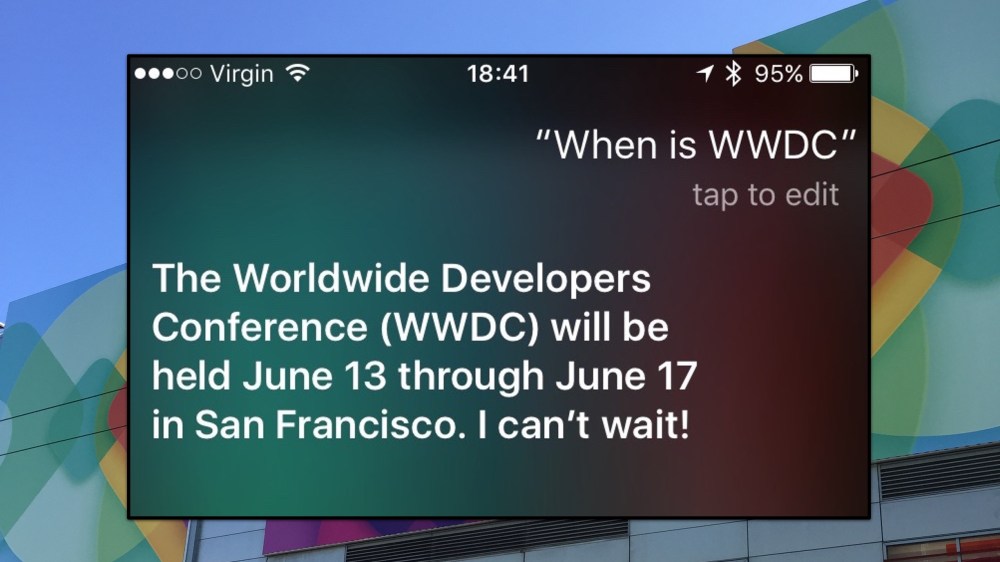 To try this out for yourself, ask Siri: ‘When is WWDC?’. Siri will helpfully reveal the date and location. The Siri comment does not seem like a mere typo or mistake. Earlier in the day, Siri was saying ‘WWDC is not yet announced’ — it now seems to have been intentionally updated with information ahead of any official announcement on Apple’s website. Here’s what Siri was saying this morning.

If Apple follows tradition, it will announce the future of its software at the developer conference. This means it will demo iOS 10 for the first time as well as the operating system updates for Mac (potentially rebranded macOS?), tvOS for Apple TV and watchOS for Apple Watch. New hardware may also feature — it’s currently looking like new MacBooks are on the cards. WWDC is not normally the venue for new iOS hardware: iOS 10 will run on the iPhone 7, but the iPhone 7 hardware unveiling itself is usually scheduled for the fall (read: September) event.

Unusual is an understatement for how this was announced; normally WWDC is announced on Apple’s website so developers can start signing up for tickets. We’ll post with more when the official unveiling happens, usually accompanied by the conference logo, but for now the bottom line is WWDC is happening June 13th to June 17th. What are you guys excited for? Let us know in the comments below.

CUPERTINO, California — April 18, 2016 — Apple® today announced that it will hold its 27th annual Worldwide Developers Conference (WWDC), hosting the creative talent behind the world’s most innovative apps, from June 13 through 17 in San Francisco. At WWDC, Apple’s developer community comes together from all corners of the globe to learn about the future of Apple’s four software platforms — iOS, OS X®, watchOS® and tvOS™.

Monday’s kickoff events, including the keynote address, will be held at the Bill Graham Civic Auditorium. The rest of the week’s conference sessions will take place at Moscone West.

“With four innovative operating systems and a new, intuitive programming language powering over 1 billion devices worldwide, there has never been a more exciting time to bring our developer community together,” said Philip Schiller, Apple’s senior vice president of Worldwide Marketing. “WWDC 2016 is going to be a landmark event for developers who are coding in Swift, and building apps and products for iOS, OS X, watchOS and tvOS. We can’t wait for everyone to join us — in San Francisco or through the live stream.”

Developers can apply for tickets via the WWDC website (developer.apple.com/wwdc/register/) now through Friday, April 22 at 10:00 a.m. PDT. Tickets will be issued to attendees through a random selection process, and developers will be notified on the status of their application by Monday, April 25 at 5:00 p.m. PDT. For the second consecutive year, there will be up to 350 WWDC Scholarships available, giving students and STEM organization members from around the world an opportunity to earn a ticket to meet and collaborate with some of the most talented developers of Apple’s ever-growing app ecosystem (developer.apple.com/wwdc/scholarships/). Additionally, this year, we will provide travel assistance to up to 125 scholarship recipients to ensure aspiring developers with financial limitations have an opportunity to participate.

Worldwide Developers Conference sessions will be streamed live throughout the week via the WWDC website (developer.apple.com/wwdc/live/) and through the WWDC app, giving developers around the world access to the week’s news and events.

Visit the Apple Worldwide Developers Conference 2016 website (developer.apple.com/wwdc/register/) to apply for a ticket, as well as for updates and more information.