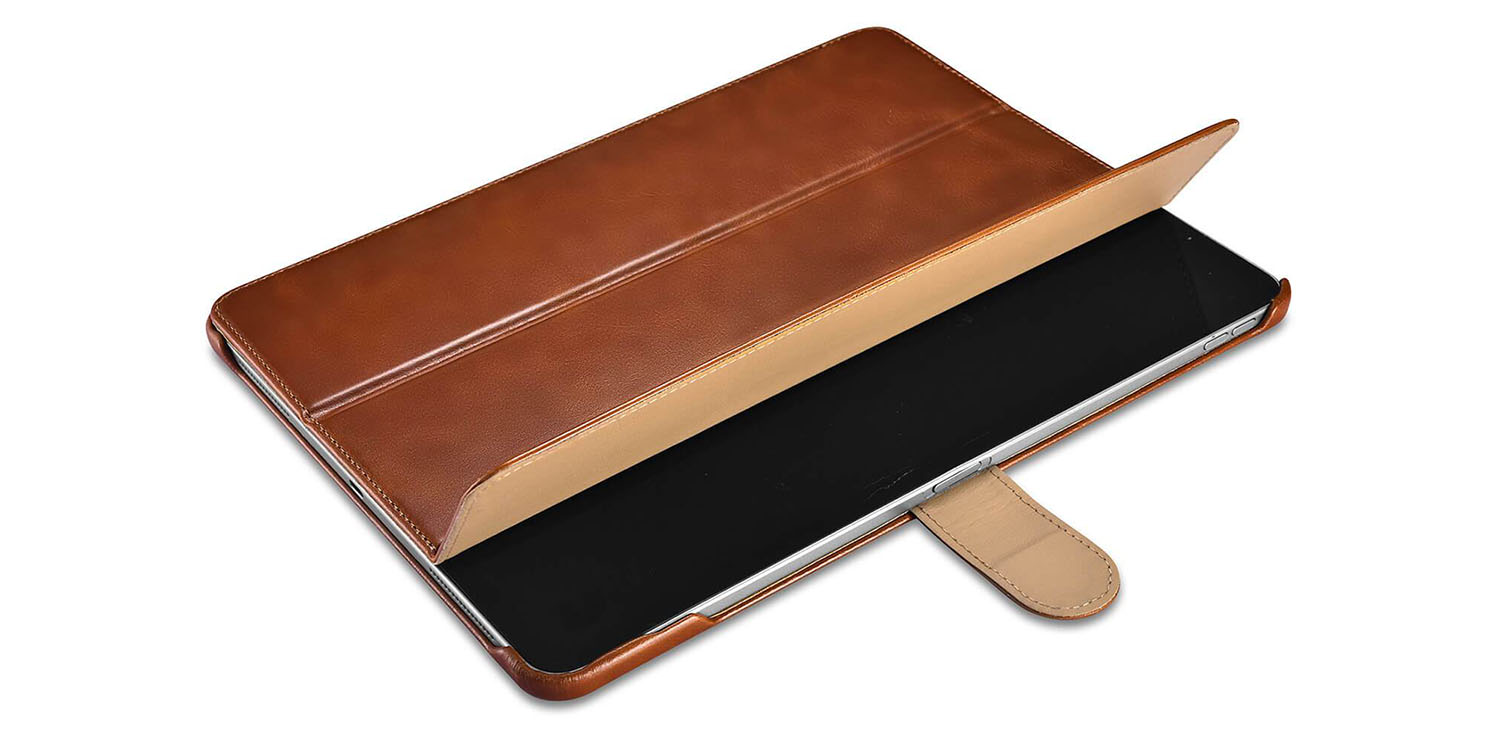 I was disappointed when Apple didn’t offer a leather Smart Cover for the 2018 12.9-inch iPad Pro. I’ve always had these on my earlier iPads. What I liked about them is that they offered screen protection with little added thickness, and also folded back into a convenient stand.

All Apple offered this year, however, was a silicone Smart Folio. This has a back as well as a front, and the rubbery material really isn’t pleasing at all.

No-one has yet offered a third-party version of what I really want – a simple leather Smart Cover – so I decided to try the next best thing: a leather Smart Folio case …

Burkley’s Turner Smart Leather Folio Cover isn’t quite a leather version of Apple’s own product, so let’s start with the differences.

The Apple version is a Smart Cover on the front with a rear protector. It leaves three of the sides of the iPad exposed, along with the corners.

The iPad attaches to the Folio magnetically, which makes it very quick to snap on and off.

The Apple cover is available in a choice of charcoal (dark grey), white, and Pink Sand (light pink). 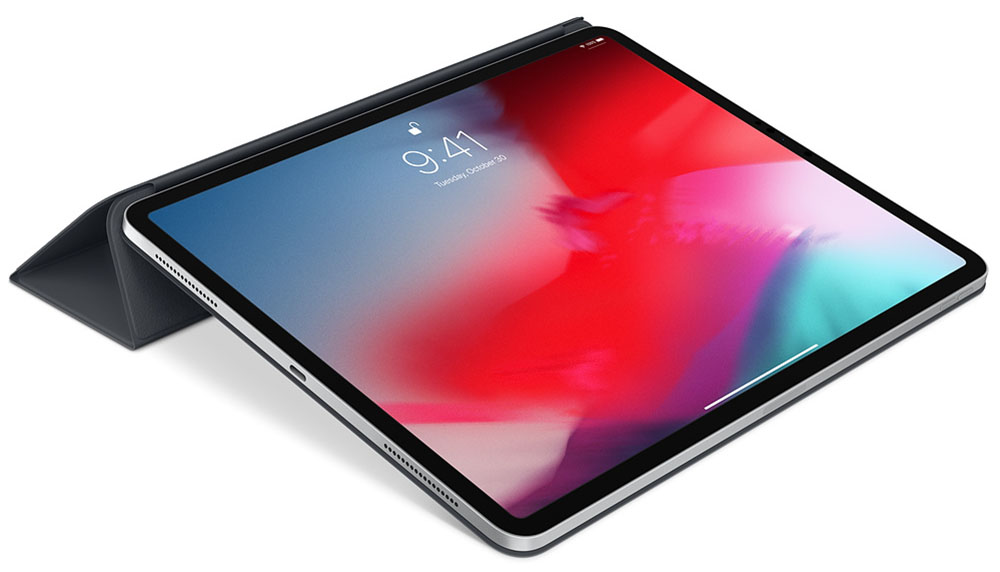 The Burkley cover, in contrast, is an iPad case with Smart Cover. It has four corner protectors, and the sides are recessed, meaning that it offers good all-round protection.

Against this, however, it is fiddlier to insert and remove the iPad. Once you’re used to it, it only takes a few seconds, but it does feel like a bit more effort and is a little less convenient. 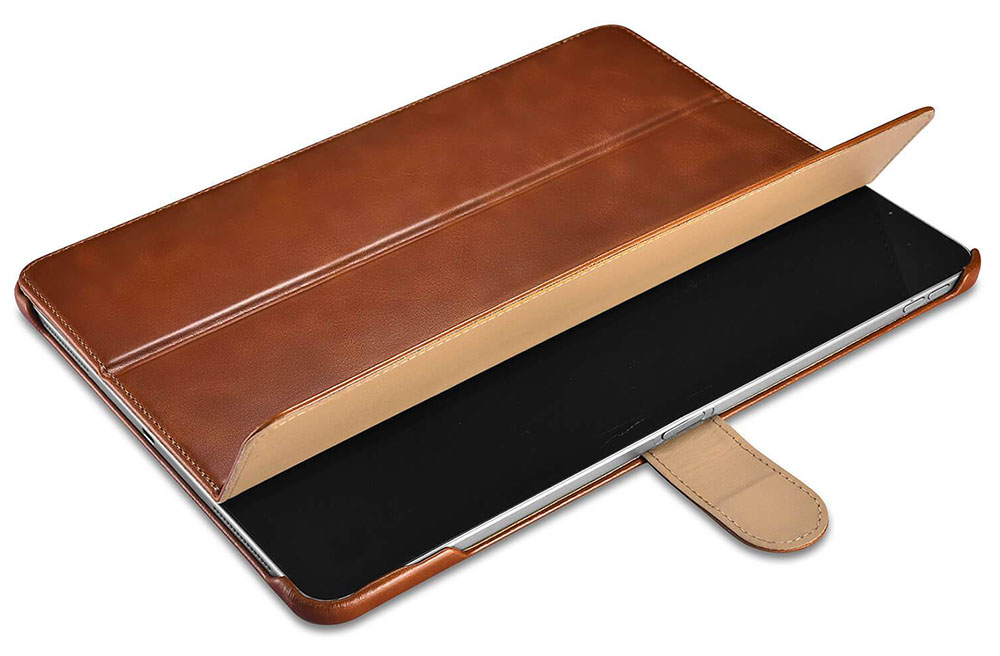 There’s no substitute for leather, in my book. Comparing the look of the Burkley cover with the Apple one, they are just night and day. The Burkley one looks like a far more premium product. Plus, you know, that lovely leather smell.

The exterior of the cover is 100% cowhide leather, which resists moisture better than other leathers, so offers a little reassurance if you ever find yourself caught out by rain when carrying the iPad without a bag. The exposed sides mean you wouldn’t want to rely on it for more than a few seconds, but it’s certainly better than nothing

I normally prefer matte leather to polished, but in this case the polished brown matched my cycle bag, so I opted for that.

The interior is micro fiber leather, which also looks good and protects the iPad from scratches when inserting and removing. Between the two is a thin plastic case.

There’s a small magnetic leather flap that wraps around the front/bottom – more on this in a moment. 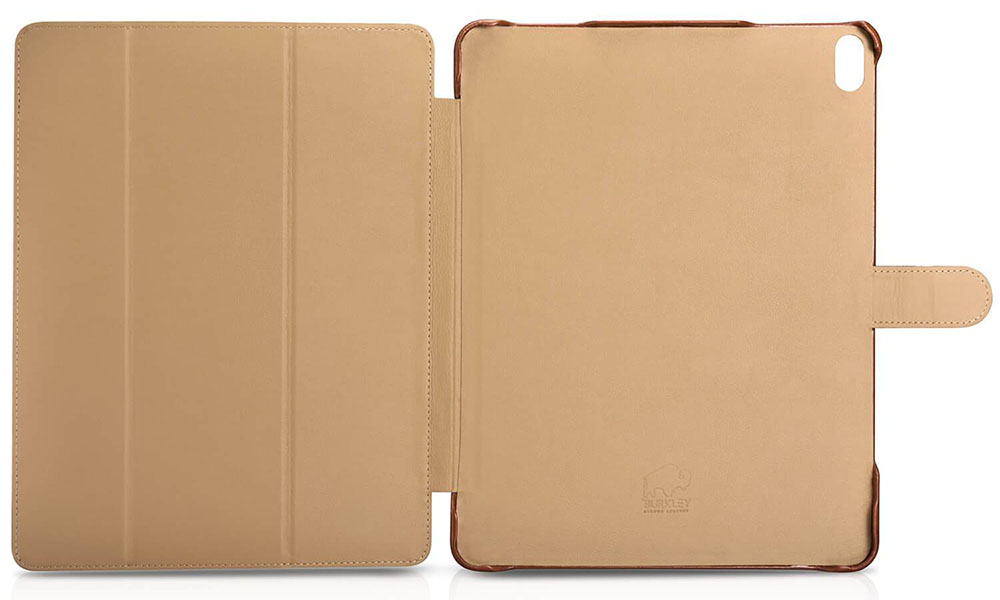 I’ve mentioned the main difference between this and Apple’s version: greater protection versus a slight loss of convenience in attaching and detaching. It’s also noticeably thicker than the Apple cover.

The four speakers and three buttons are all exposed, so usability isn’t affected at all.

The Smart Cover snaps closed magnetically just like the Apple one, but there’s also that magnetic flap. This is primarily there to offer a bit more security for the Apple Pencil, but it does look good too.

However, it’s a little inconvenient in use, as you have to tuck it under the back of the iPad to avoid it getting in your way when using the iPad in typing mode. If I routinely carried the Pencil, I’d be glad of it, but as I don’t I’d on balance rather not have it. I’m a little tempted to take a sharp knife and remove it.

The Smart Cover is a little stiffier/springier than the Apple one, so doesn’t fold quite as neatly. However, it works well on both lap and desk in typing orientation.

It’s also secure in vertical stand aka movie mode, though that flap is a bit of a nuisance at first, as it can flop forward over the screen. This was only an issue the first time I used it in that mode – after that, bending it back a few times saw it stay put, though it is still a little visually distracting standing up above the screen like that.

Given that Apple charges $99 for its silicone Smart Folio (less on Amazon), just $20 more for a leather one seems a no-brainer.

I’d still ideally like a simple leather smart cover as Apple has offered on earlier iPads, but given the choice between the Apple Folio Cover and the Burkley Leather Smart Folio Cover, I’ll take this one every time.

As someone who only uses the Apple Pencil occasionally, I’d prefer it without the front flap, but that’s really my only complaint – and those who carry the Pencil around with them will definitely appreciate it.

The Burkley Leather Smart Folio Cover for 12.9-inch iPad Pro is available from the company’s own website for $119. The 11-inch version is available for $99/119 depending on color. Other versions for older iPad models are also available.