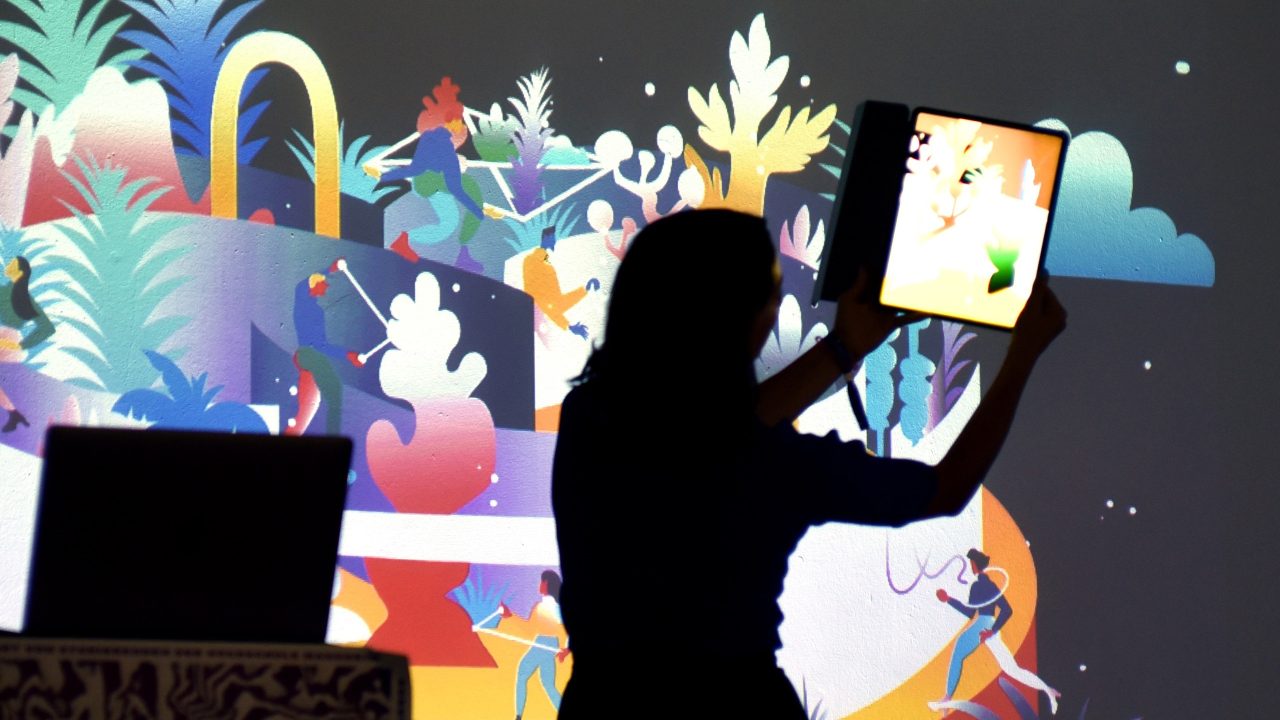 You’ve heard that AR will be transformative. You’ve seen it in action everywhere, from the iOS Measure app to Pokémon GO. But one largely unexplored application of AR, until recently, is augmented reality art.

Sparked in part by the release of design tools like Reality Composer and Adobe Aero, as well as initiatives like Today at Apple AR[T] Labs and immersive Walks at Apple Stores around the world, artists have been taking notice.

During her time as a multimedia technician at Apple, Heather Cathleen Dunaway Smith discovered the creative potential of technology. She studied interactive multimedia out of a desire to tell stories that created a dialog between art and audience, rather than a monologue. “Responsive artwork fosters real relationships with audience members and opens them up to deeper emotional connections,” she says. “For me, art is about those connections.”

“AR is especially good at allowing people to try on different perspectives and realities. The illusion of proximity makes the work really impactful. Experiences that seem to happen in your immediate physical space automatically feel personal and emotionally potent. If the piece is truly responding to the audience, it will give them a sense of agency and ownership over the work. The line between art and audience is blurred, leading to a deeper emotional connection.”

Or is it? 🤔 First post of 2020 ✨ My plain for the year is to push the boundaries of this AR thing and collaborate as much as possible. If you’ve got any cool ideas for an AR post hit me up! Made in @procreate #procreate5 and @slide_ar . . . . . #artoftype #typematters #typetopia #dailytype #createdtoday #illustrationartists #strengthinletters #50words #madewithslide #slidear #ar #arkit #augmentedreality #travel #southamerica #travelling #framebyframe #happymonday #añonuevo

Andrew Wilson began experimenting with traditional ink-on-paper calligraphy six years ago. Instagram led him to digital lettering with Procreate on an iPad Pro. Once he started, there was no turning back.

“I enjoy creating lettering that has a tangible quality; something that creates the illusion of depth using light and shadow. Around a year ago I started seeing people experimenting with augmented reality using Slide AR, an uncomplicated app that allows you to arrange PNGs and GIFs in a 3D space. For me, this seemed like a great way to expand on the 3D elements I had already been trying to bring to my work.”

Although AR is a new medium, Andrew draws inspiration from traditional lettering techniques like sign painting, graffiti, and fileteado, an Argentinian painting style. “I always want to create something that has weight and texture. I want all of my work to feel like it could be held in your hands,” he adds. “Sometimes it works, sometimes it doesn’t, but with every piece I learn something new. I have an insatiable need for each piece to feel even more ‘real’ than the last.”

AR sketch on the train home for the holidays. Time to calm down. We're so small in this world, and there are so few things that are actually important. Hope you all get to spend a couple of calm warm days ❤ . . . #augmentedreality #procreate #arkit #artivive #virtualreality #meditation #calm #doodle #illustration #animation #graphicart #drawing #draw #sketch #sketchbook #artoftheday #instadraw  #geometricart #abstractart  #virtualart #interactive

For Susi Vetter, creating in AR brings a bit of magic to everyday life. What began as experimentation to play and have fun became a part of her workflow. She’s now illustrating and animating using Procreate, Photoshop, and After Effects. Her works come to life with Artivive, Adobe Aero, and Facebook’s Spark AR platform.

“There’s this magic moment when you alter or enhance the physical world with something virtual — that’s the tension I like to work with in AR and what I focus on in my process. I like making the jump from a pencil sketch in the physical world to a finished art piece in AR. I ask myself what the AR layer does to the physical art, what different aspects it adds, how it can surprise or shock and make the artwork complete. When creating a piece with AR, I like to think of it as a necessary part of the artwork and not decoration.”

Susi discovered a level of sharing and collaboration on ideas in the AR community she’s rarely seen in new technologies. Ultimately, she hopes the excitement among artists will help even more immersive mediums grow. “The development I’m most excited about is Mixed Reality and Enhanced Reality, where the virtual part of the art experience isn’t restricted to a small device like a phone or a tablet anymore.”

Matthew Rey Treece began creating fantastical worlds years before tools like Apple’s ARKit were available. His vivid 3D renders mashed with landscape photography combined a love of urban exploration with VJing for glitch hop, dubstep, and EDM artists. Over the past six months, his workflow has been transformed thanks to evolving hardware and software that has made AR accessible to independent creators. “I was drawn to augmented reality through a desire to see the manifestation of my imagination fused with our physical reality in a shareable format,” Matthew says.

Navigating the mountains of Colorado, Matthew searches for places where he imagines an AR sculpture would fit. He captures the scene and uses Cinema 4D and Adobe Dimension on his Mac to create a sculpture. His iPhone and iPad make the art a reality through Adobe Aero.

“Creating AR sculptures that are enormous in scale and placing them in locations you wouldn’t expect impacts the feelings of people seeing them by triggering ‘What is that?’ and ‘How is that happening?’ responses. The eyes and brain constantly crave new visual inputs, shapes, colors, and designs. AR allows us to ‘scratch this itch’ and make immersive art experiences that people want to explore until they figure it out.”

“VR is a very singular experience focused on the individual wearing the glasses,” says Nadine Kolodziey, a visual artist and illustrator based in Berlin. “With AR, the community can be included and it adds to the way we communicate. During my design process I think a lot about the people ‘using’ the art. We switch from the viewer or visitor to the user and this makes a huge difference.”

Nadine compares the world of AR to the spirit of the Wild West. Standards are uncertain and everything is changing. Developments happen so quickly that anything is possible. Today, Nadine uses Unity and Adobe Aero, and is also part of the growing community of artists designing Instagram experiences like AR face filters with Spark AR.

“The magic of something unpredictable and new makes AR so playful. It’s just building up its character, rules and catalogue. For me as a creative, it’s a great time to explore and follow the developments of this young media.”

🤓 Wait for the reveal. 😃 Am stoked w/ how this week’s new AR experiment turned out. The elements that disappear were triggered by tapping on them which then triggered new elements to appear. #augmentedreality #ar #adobeaero #arart #usdz

After freelancing for almost 20 years, illustrator Darren Booth had run aground with traditional materials and decided to try an iPad. “It opened up a whole new world and completely re-energized me,” Darren explains. “Experimenting with a new set of tools and variety of apps organically led me to AR. I realized quickly that AR has the potential to change how art and illustration can be used.”

Darren is currently completing a 12-week residency with Adobe, experimenting with Adobe Aero. Aero is one of the forefront apps designed to make designing for AR more approachable. Artists can easily import their existing Photoshop documents and artwork to a 3D world. He compares the state of AR today to early blues music, the first television sets, and the iPhone 3G: game-changers with rough edges and an incredible amount of potential.

“I’m comfortable working in 2D, and when I come up with an idea that I want to execute, I have a decent idea about the various paths I could take to achieve that goal. But with AR, those paths aren’t clear yet. It’s very exciting to have discovery phases again, especially when failure occurs. I’m so curious about how to create something I haven’t created before.” 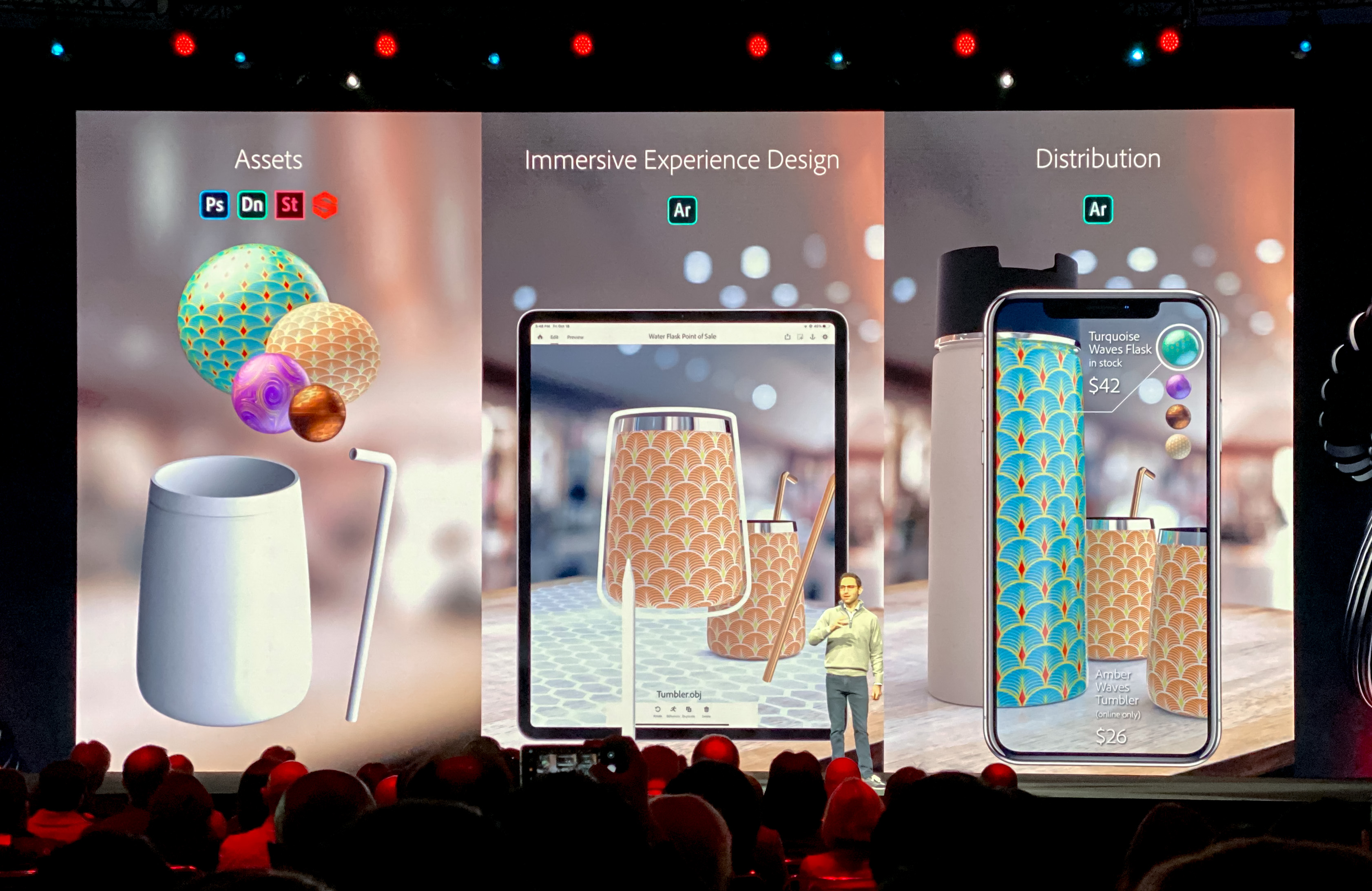 Time and experience lead to better tools, and better tools make it easier for creators to express their ideas and feelings in new ways. That’s why artists are so excited to see how AR authoring and sharing tools will continue to evolve. Those who embrace AR early are given the opportunity to make their mark on the future of creativity.

Among the artists I spoke to, two key opportunities became a common refrain: the need for tools with a lower barrier to entry, and more effective platforms to share AR artwork with a broad audience.

Major companies and small studios alike have recognized the need for tools that are both powerful and accessible. Apple’s Reality Composer and Adobe Aero have set expectations for what’s possible today, and tools like Slide AR and Artivive have captured interest from the creative community. But artists must still employ clever workarounds and accept limitations when building experiences. A deep knowledge of 3D modeling is often required for anything but the simples scenes. These barriers can discourage emerging artists.

Instagram has become the preferred platform to share AR art. Artists post screen recordings and demos of their creations and experiments. These videos are effective, but omit the interactivity of a true AR experience. As of today, there’s no popular social platform for sharing USDZ files or previewing 3D models. Apple’s AR Quick Look on the web is the first small step toward a ubiquitous solution.

“The only way for this medium to discover itself is by lots and lots of artists creating work,” says Heather Cathleen Dunaway Smith. “I’m really excited to see new, easy-to-use software emerging. This sort of art-making should be accessible to everyone.”