A look back at my favorite Apple products through the decades 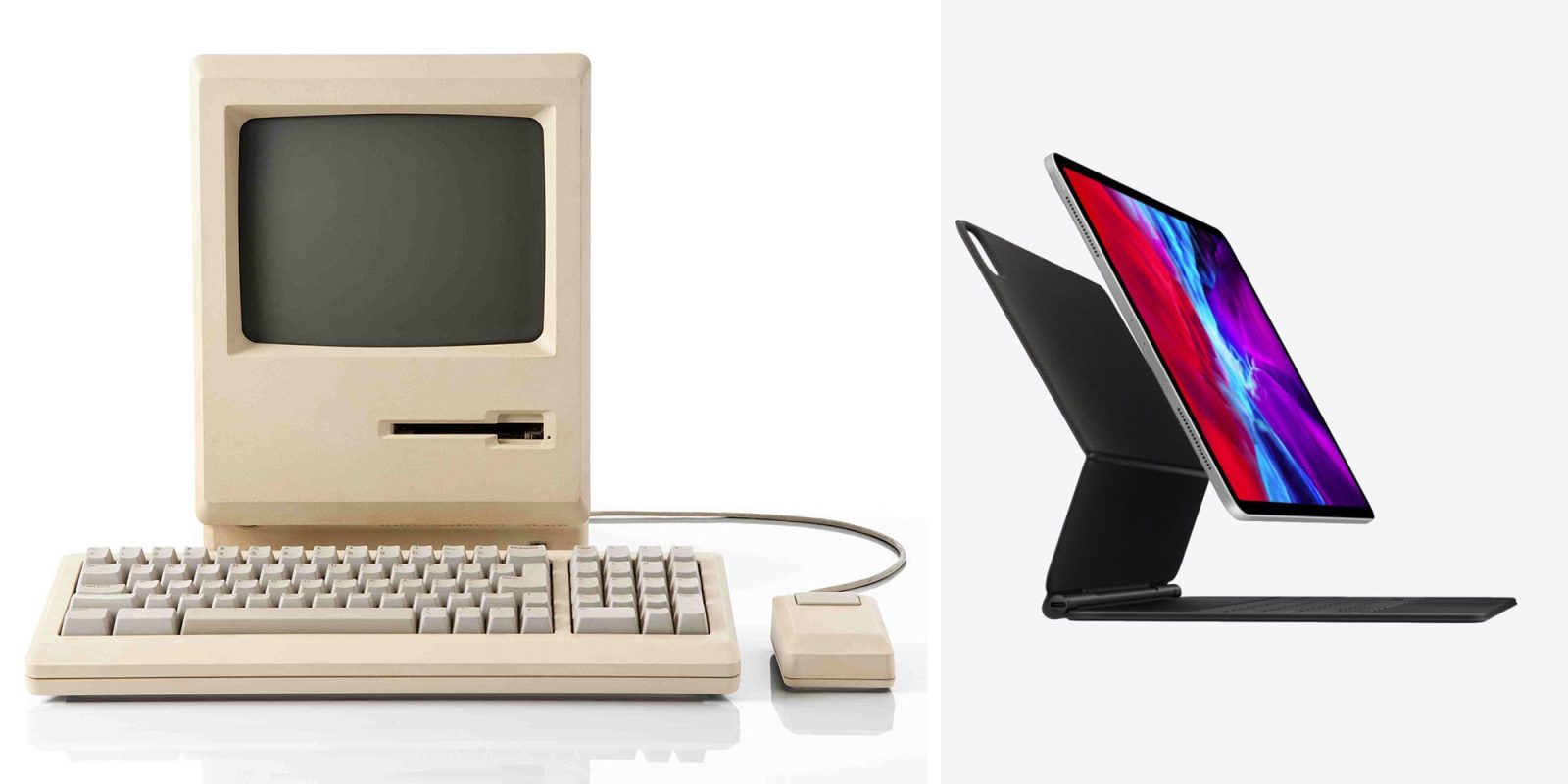 We spend a lot of time here at 9to5Mac looking forward to new products, but sometimes it’s fun to look back at our favorite Apple products, too.

For me, a few stand out for different reasons – some going way back into the mists of time, some more recent. I have to open with a confession…

When it comes back to my very first introduction to Apple products, in the form of the Apple II when I was a teenager, I wasn’t that impressed. I preferred the Tandy TRS-80 and the RML 380Z, both computers from the same year. And moving forward from 1977 to 1981, the BBC Micro Model B was by far my favorite machine of its time. But that situation changed completely in 1984.

I’m not quite going to cover things in chronological order, instead breaking things down into Macs, peripherals/accessories, and mobile devices.

I fell in love with this the first time I saw it. At a time when other computers were controlled by often esoteric command-line input, this beautiful bitmapped screen with visual representations of files and folders, and where you used a mouse to open things, was a thing of wonder and joy.

I mean, technically it was the Lisa, which I got the chance to use for about 15 minutes, but that was so absurdly priced as to make it a mere dream at the time. The Macintosh, while still phenomenally expensive for its day, was something I managed to buy – albeit with the help of the hefty journalist discount Apple used to offer in the early days when it had to court media attention.

I absolutely adored that machine, and while its advertised portability (or luggability) was somewhat dubious, I did indeed carry it back and forth between home and office on a daily basis for quite some time.

Prior to the Macintosh, I’d owned an Osborne 1, a luggable machine that kind of folded up into a hefty briefcase form. I loved that too, and dreamed of a Macintosh with the same kind of form factor. My wish was granted when the Macintosh Portable arrived.

I again absolutely loved it, and happily carried it with me on a ridiculous number of occasions, including to coffee shops.

The first true laptop Mac. Finally I could use my Mac absolutely anywhere, including trains and planes.

That switch from desktop to laptop was a permanent one: There was no way I could ever think of going back, even today, when I am based in my home office most of the time.

I had a succession of PowerBooks after that, but none of the individual models really stand out – each was simply a better version of its predecessor.

It will come as no surprise to anyone that this one does stand out! To me, it gave me all the benefits of a portable Mac, but with a screen large enough – at the time – to also serve as a desktop machine.

I loved the model so much that as soon as it was discontinued, I went out the same day to buy the very last model ever made in order to maximize its usable life. That final machine was upgraded multiple times, ending up with 2TB of SSD storage.

I’d loved the MacBook Air ever since it was launched, but I just couldn’t find a justification to own one. I finally managed it when I went on a cycle tour of the Netherlands and wanted to be able to blog and edit photos as I went. Having a full-on Mac in such a portable format was fantastic.

I went through a couple of generations, and still have my 2013 model sitting in a cupboard as a backup machine – and it has been pressed into service as such on a couple of occasions.

For quite a few years, then, I had two Macs: my 17-inch MBP as my main machine, and my 11-inch MBA as my more portable option. That finally changed with the 2016 15-inch MacBook Pro, which felt like a good enough compromise option to replace both.

It wasn’t the 17-inch display I really wanted, and it wasn’t the uber-compact MacBook Air I loved to carry, but it satisfied both criteria well enough for me to make the switch.

Selecting a machine I describe as a compromise as one of my favorite Apple products might seem odd, but I think it has earned its place by virtue of persuading me to swap out two of my favorites!

The 16-inch was a good enough step forward to make me happy to switch, getting me that little bit closer to the 17-inch screen I still miss, but I see that as an evolutionary step, so haven’t given it its own place in the list. Though I suspect the M1X version will be added next time!

That feels like such an olde-world word now, and two of the three that stand out for me are indeed from a very long time ago.

My tech writing days began in the era of newspapers and magazines. Typesetting in those days was an incredibly manual process, literally assembling lines of metal characters in a block, and then glueing lines of type onto a page. That all changed with what was known as desktop publishing, and the Apple LaserWriter was instrumental in that process.

It took a little time for desktop publishing to take over in magazine production, but it was seeing what that first LaserWriter could do that had so many of us excited about the future, and ready to make the switch.

Sitting here at my 49-inch Dell monitor, it seems hard to imagine now, but a 30-inch display was once enormous! I still remember how exciting it was to edit photos on a display that was, 99% of the time, as big as the largest print I would be creating. I absolutely loved it, and when it finally died I actually ended up spending more on repairing it than it would have cost to buy a third-party monitor of the same size.

I’ve written at length about my own experience of the HomePod, and my sadness that it was discontinued. For me, it was the sweet spot of something with really good sound quality in a compact form, with the convenience of voice control. In the living room, I still love my Naim mu-so, but every other room has at least one HomePod.

I bought the original iPod on day one, and absolutely loved that device. The very first mp3 player I owned held one album at a time, and subsequent models a few albums. To have a device where I only needed to swap out the music every few weeks was a delight.

My final iPod was the 160GB Classic, which stored every album I owned. I traveled a lot on business at the time, and the ability to have all my music with me all the time was one key way of retaining my sanity.

For many people, the iPhone is the thing that brings them into the Apple ecosystem, with iPad, Mac, and other things to follow. With me, it was the other way around: Mac first, then iPad – and iPhone rather a long time later.

I preferred phones with physical keyboards, but the iPhone 4S was the phone to win me over. Siri – as rudimentary as it was at the time – was good enough to persuade me that a phone no longer needed a hardware keyboard, and by that time it just made sense to go all-in on Apple.

The original iPhone SE also has to get an honorable mention here, for reviving and updating everything I loved about the 4S.

I could pick any of the iPhone X-onward phones here, but it was the X that dramatically updated the design of the iPhone, with Face ID hugely improving the user experience of apps that require login (like banking apps), and the camera’s low-light capabilities really impressing.

I mean, I’ve loved every iPad I’ve owned, but the biggest thrill was the original – which rapidly became one of my all-time favorite gadgets. It’s a hugely flexible device in a really portable format with genuine all-day battery life. iPads have been everything from my primary entertainment device on long-haul flights through to MacBook substitutes for writing novels in coffee shops.

While I’ve loved them all, this one was the first one that made me almost as excited as the original. I adored the screen of the 1st-gen, but it was just too unwieldy. It’s the only iPad I’ve ever tried and returned. But the second-gen model gave us the same fantastic display in a significantly more portable form. It remains one of my favorite gadgets – especially with the addition of the Magic Keyboard.

I debated whether to include this, as I can’t say that I’ve ever loved the Apple Watch, in the way I did everything listed above – but I feel it has to make the list as it’s become an indispensable device. Like the iPad, I’m giving the prize to the first-gen model because that was the one which demonstrated the usefulness of the concept.

What are your favorite Apple products?

These are the ones that stand out for me – what would make your list? Please share in the comments.