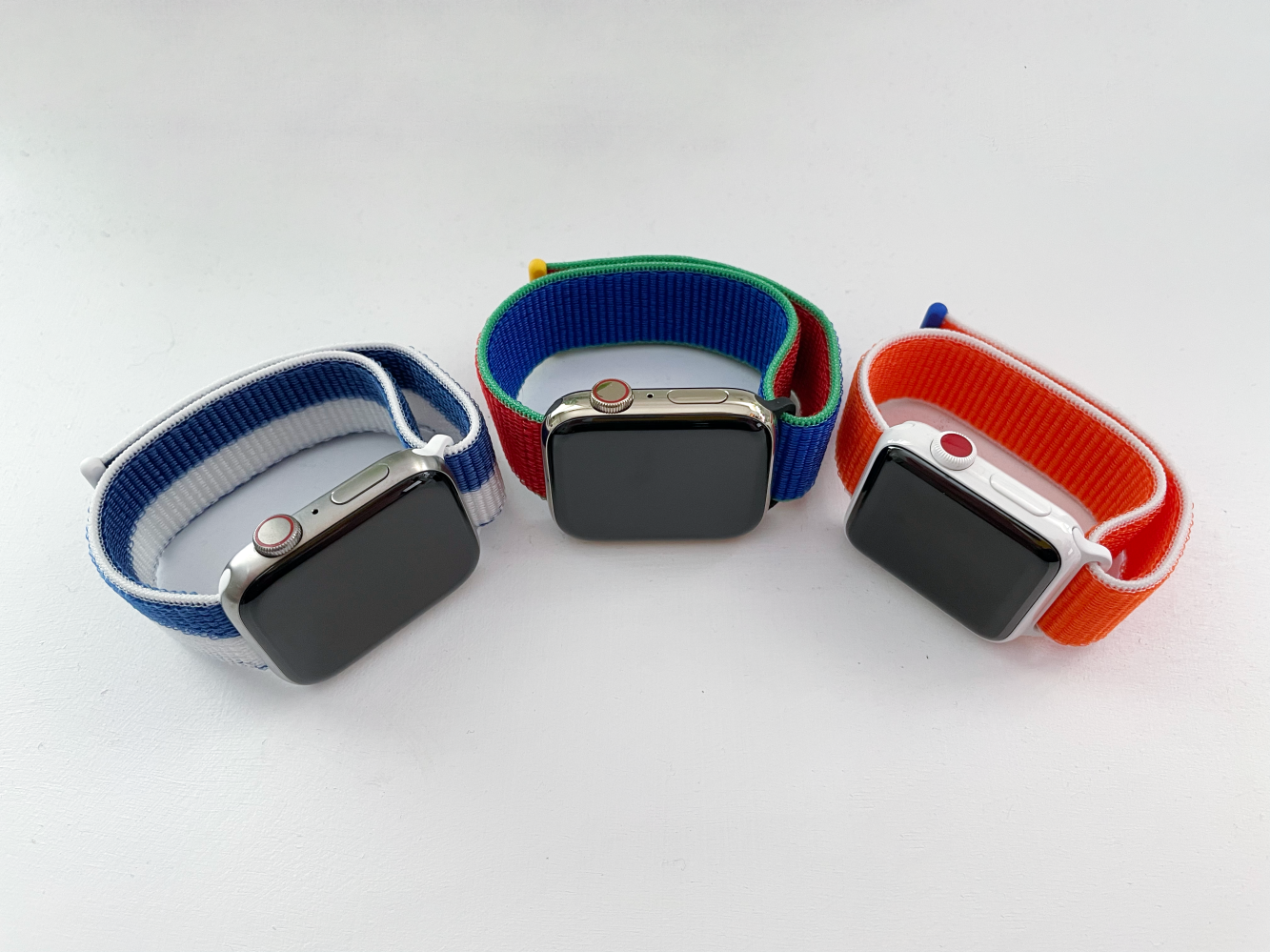 Earlier this week, Apple introduced the new International Collection of Apple Watch bands designed to celebrate the Summer Olympics. There are 22 bands in total, available for all sizes of Apple Watch. Each band is based on Apple’s sport loop but has unique country-specific designs. We’ve got our hands on a few of the new bands and want to show them off.

Apple offers bands in a variety of color combinations that correspond with the colors of a country’s flag. Some bands obviously have more colors than others. For example, the South Africa sport loop has five colors: red, blue, green, black, and yellow, while the Australia sport loop only has two: green and yellow. Some bands are color blocked while others are striped. There are many different styles.

Let’s start with the United States sport loop. As you’d expect, it’s red, white, and blue. Apple chose to go with a sleek striped design. The main fabric of the band is half white and half blue. It’s flanked by two thin red stripes on the edge.

The United States striped watch face that’s available for download from Apple’s website or through the app clip that comes in the box has three red stripes, three white stripes, and two blue ones that form something that resembles a diagonal take on the American flag. The combination of the face and the band is really great.

The next band we’ve got is the Japan sport loop. It’s beautifully minimal, just like the Japanese flag. It’s all white with thin red strips on the edge. Like the band, the corresponding Japan striped watch face is very simple. It’s white edge to edge with a single red stripe running through the middle diagonally.

The Netherlands sport loop uses the same general structure as Japan’s. It’s orange with white stripes on the edge. The orange is eye-popping and delightfully vibrant. The fastener on the end of the band is blue and it matches the Netherlands striped watch face.

One of my favorite bands in the new collection is the Greece sport loop. Like the Greek flag, it’s white and blue. One edge is blue while the other is white. In the center, there is a thick white stripe and a thick blue stripe. The two colors alternate and form a really clean design. The Greek striped watch face uses all 8 stripes and alternates between blue and white.

As I mentioned above, the South Africa sport loop has five colors and they are stunning together. The top half of the band is red while the bottom is blue. Both edges of the band are green and there’s a yellow hook and loop fastener on the end. The South Africa striped watch face is the most dynamic of the bunch. It uses all four colors in addition to white and black.

While we’ve only been able to get our hands on a few of these bands, some of our pals from around the web have gotten their hands on all of them. Below you can see what the new international bands look like next to some of their counterparts from the 2016 woven nylon Olympics collection.