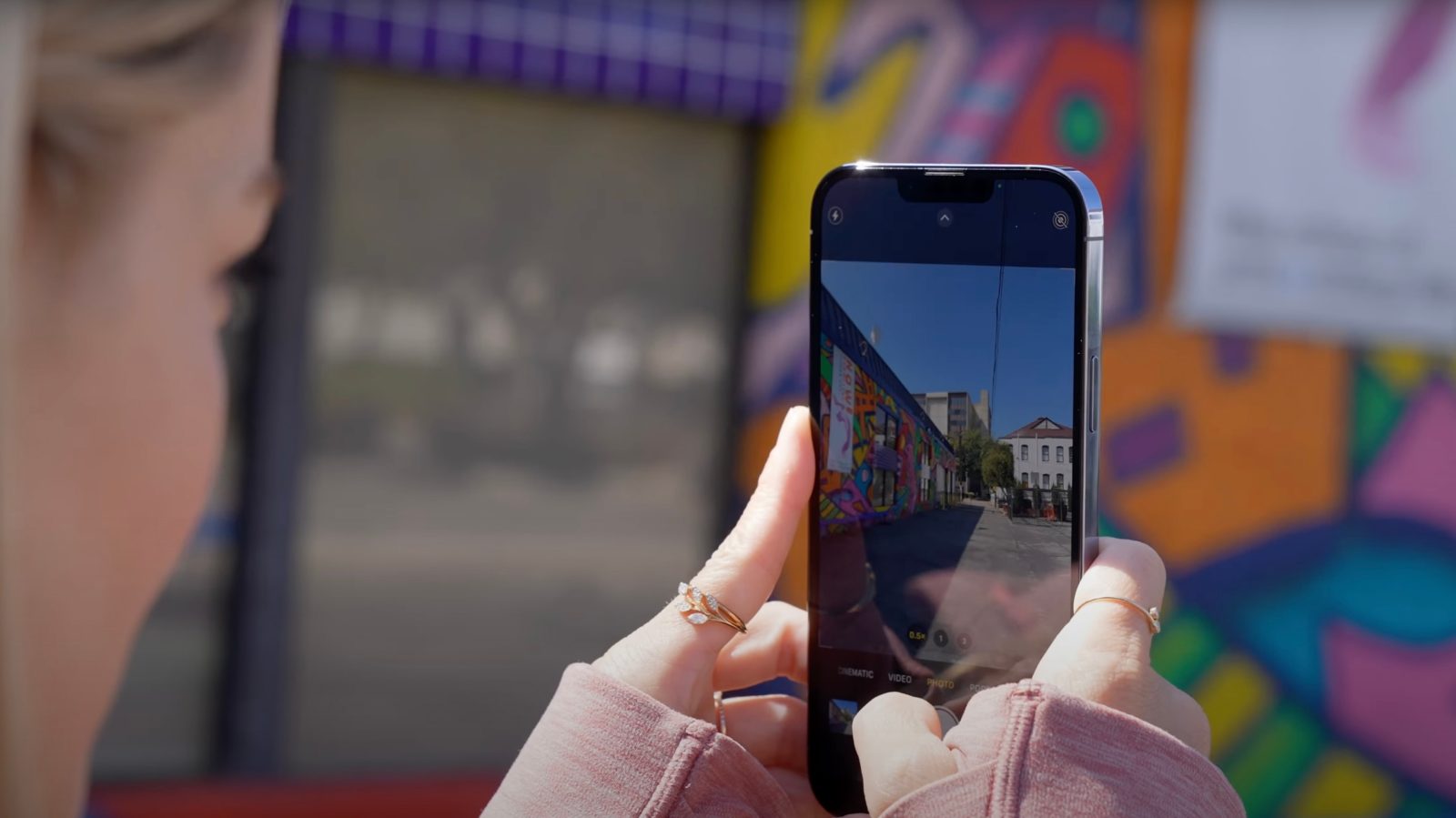 Ahead of the first orders arriving to customers on Friday, the first reviews of the iPhone 13 and iPhone 13 Pro have arrived. These embargoed press reviews offer our first look at the iPhone 13 in the wild, including the new camera hardware, new colors, design tweaks, and more.

Writing for the Verge, Dieter Bohn says that the true star of the iPhone 13 is its longer battery life:

On one day of my testing, the regular iPhone 13 made it from 7am to midnight before it tuckered out. That was with some camera testing, watching some video, the usual doomscrolling, emails, work, and some games. It was an intense set of work for the five hours of screentime that day, so that’s impressive. On another day with lighter usage, I didn’t see the battery warning until the following morning. But the iPhone 13’s battery isn’t magic. When we had a day of a lot more 4K video testing, I was looking for a charger by 7 or 8.

CNET has some details on how Cinematic mode performs on the iPhone 13 and iPhone 13 mini:

The results are nice, and I imagine after using it enough you’ll have your own sense of what’s possible. But there are a few limits to be aware of. First, you can’t use Cinematic mode when it’s dark. You’ll be greeted with a message prompting you to turn on your flash.

Next, editing a Cinematic video is straightforward enough, but the controls for the keyframes where you change focus are small. You can long-press to expand the timeline, but it shrinks back as soon as you let go making it impossible to keep a zoomed in view of those tiny focus keyframes.

And some additional Cinematic Mode details from Engadget:

On its own, Apple’s system is pretty clever. The iPhone 13 did a great job of identifying faces (both human and canine) in my shots, and yellow or white boxes appeared to indicate potential things to focus on. As my subjects turned toward and away from the camera, they became clearer and blurrier respectively. But when I tried to exert more control and adjust the focal point, the system struggled. Sometimes, my intended subject remained blurry even after I tapped on its rectangle. Other times, the iPhone didn’t follow the person I selected after they walked behind an obstruction, though that’s a reasonable situation.

When it did perform as expected, Cinematic Mode produced a pleasant effect that gave videos a professional air. But at the default intensity, the blurriness looked strange or artificial. The outline of my colleague’s head was stark against the softened background and I had to adjust the F-stop to the highest (f/16) to get a more natural feel.

As for the still camera performance, CNN Underscored has some details on the new Photographic Styles feature:

Apple’s new “Photographic Styles” is the closest thing to a Pro mode yet, which lets you make customizations to how the phone will take a photo before you hit the shutter button. It’s sort of like filters on steroids, as it dynamically adjusts for any given shot. You can pick from five (standard, vibrant, rich contrast, warm and cool) and adjust the tone and warmth on a slider. Each lens has its own take but we’ve been especially liking warm which doesn’t oversaturate but skews the colors in a realistic way by adding in more gold or orange. Similarly, Cool will add in some hues of blue while rich contrast focuses on the darker side of the spectrum for a sharper look. Given that it’s software though, it would have been neat to see this or an aspect of this arrive as a software update to the iPhone 12.

Despite their brighter screens, Apple said the iPhone 13 and 13 mini should last up to 2.5 and 1.5 hours longer than their predecessors respectively. While the 13 mini did beat the 12 mini by sticking around almost a whole day on light use, the 13 hours and 19 minutes score on our video rundown test is still shorter than the average smartphone. It’s a pity; I love the size of the iPhone 13 mini — it’s just so much easier to use with one hand. But the greatest drawback of any modern phone this small is a lack of endurance.

One of the leading changes with the iPhone 13 Pro and iPhone 13 Pro Max is the new ProMotion display technology. The Verge reports that this long-awaited addition lives up to the hype:

What all this means practically is that scrolling and animations look much smoother. It also has battery life benefits because if nothing’s moving on the screen, the screen needs to refresh less often and therefore uses less power.

None of this is news to Android users, but if you haven’t used a high refresh rate display on a phone before it can be a little hard to explain why it makes a difference. This is doubly true on iPhones, because Apple has gotten away with not putting a high refresh rate screen on an iPhone for so long because iOS is itself a very smooth OS without very much jank in its animations.

When I scroll on the iPhone 13 Pro, the text stays readable instead of turning into a blur. Things moving on the screen are smoother. It feels more like a direct interaction with my finger because the iPhone can literally change its refresh rate to match my movement.

The Verge also has details on battery life improvements with the iPhone 13 Pro:

I’ve only had the phones for a little less than a week, so I focused most of my use on the smaller iPhone 13 Pro as a kind of worst-case test. And my results are in line with Apple’s claims. On a day when we really pushed the phone with lots of 4K video and max brightness on the screen, it still lasted from early morning to 11PM with 20 percent remaining — with somewhere north of four hours of very heavy use in the screen time tracking app. A day with less intense usage clocked me at seven hours of screen on time before the low battery warning kicked in.

Bottom line: I have much more confidence walking out of the house for a long day without carrying an external battery pack. For me, the line a smartphone needs to cross is that I trust I can get through a normal day without battery anxiety. Both the 13 Pro and the 13 Pro Max easily get there.

In bright and medium lighting, I found macro photography on the iPhone solid. It’s not on the level of a mirrorless camera with dedicated macro lens but it’s one of the better implementations of a macro mode that I’ve seen on a phone. I took solid close-up photos of food, coffee and even recorded a nightmare video clip of ants crawling all over a discarded grapefruit.

In low lighting, the iPhone still switches to the ultrawide camera to take a macro photo. The best camera on the phone is the wide-angle camera, which can also handle low-light situations well. And because the phone has to be so close to its subject, it actually blocks some of the light, resulting in mediocre close-up. At this time, there isn’t a way to turn off the macro functionality.

Unlike on the regular iPhone 13/13 mini (and all iPhones before it), which uses each individual camera to autofocus, which itself limits its close-range focusing distance, the iPhone 13 Pros’ 1x and 3x cameras actually get an assist from the 0.5x ultra-wide and its macro capabilities.

So for example, if you have your iPhone 13 Pro camera set to the 1x wide camera and place an object or a subject within 14 centimeters (5.5 inches) of it, the viewfinder will maintain the 1x framing/composition but use the ultra-wide’s close-range autofocusing in tandem. You can literally see the viewfinder flicker/pop and “switch” to this hybrid viewfinder. The same applies to the 3x telephoto camera; the viewfinder maintains the 3x framing, but uses the ultra-wide for autofocus of subjects within 14 centimeters.

I don’t agree with this.

I’ll tell you why: Because the framing automatically changes from what you — the person taking the shot or recording the video — might intend to capture. I welcome greater detail for close-ups and it’s clever that Apple is using the ultra-wide to augment the 1x wide and 3x telephoto at short distances, but the transitioning of cameras is disorienting. Apple makes no mention of this camera switching/augmenting on its iPhone 13 Pro website. I get that it’s supposed to be one of those “it just works” features. At least that was Apple’s intention I’m told, but it just doesn’t.

The Wall Street Journal was not very impressed with Cinematic mode:

With videos, gosh, I was really excited about the new Cinematic mode. Aaaand gosh, was it a let down. The feature—which you could call “Portrait mode for video”—adds artistic blur around the object in focus. The coolest thing is that you can tap to refocus while you shoot (and even do it afterward in the Photos app).

Except, as you can see in my video, the software struggles to know where objects begin and end. It’s a lot like the early days of Portrait Mode, but it’s worse because now the blur moves and warps. I shot footage where the software lost parts of noses and fingers, and struggled with items such as a phone or camera. The Apple spokeswoman said Cinematic mode is a “breakthrough innovation that will keep getting better over time.”