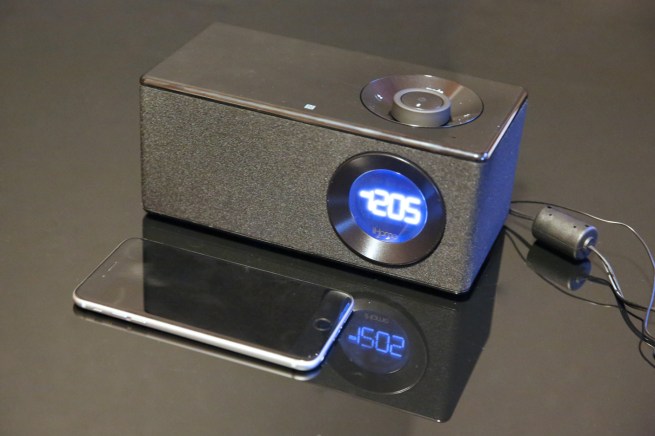 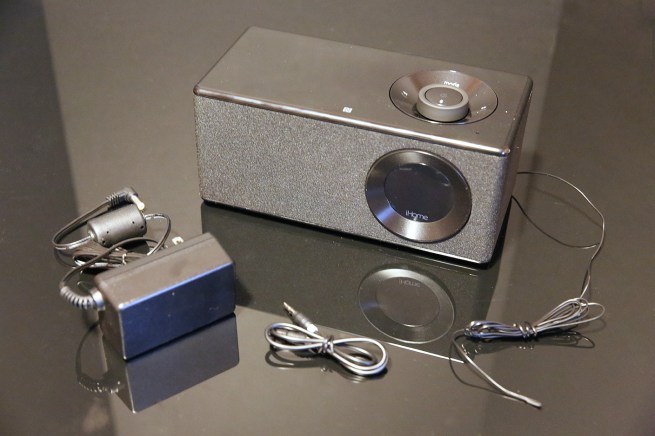 Measuring 9″ wide by 4.25″ deep and 3.9″ tall, iBN10 goes further in the direction of design minimalism than any iHome clock radio we can recall. Six buttons and a rotary dial are the only top-mounted controls, an efficient reduction of the numerous granular setting buttons of past iHome models. Part of this has been achieved by tossing away one arguably key feature and several smaller ones. Critically, iBN10 has no alarms, versus the standard iHome clock’s two or three, which also means no alarm buttons to mess with. But this also means that your iPhone or iPad is on its own to wake you up or otherwise sound an alarm. Even setting the battery-backed clock is done with a button and switch hidden on the unit’s back. 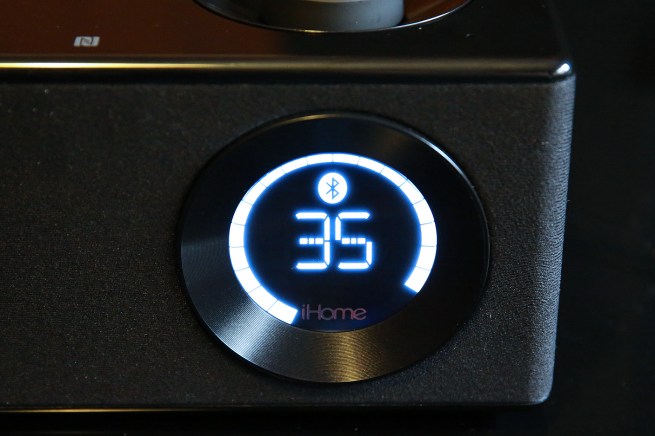 iHome has gone through so many clocks over the years that it’s hard to call iBN10’s a real departure, but there are a couple of things that make it cool. Circular in shape rather than boxy, the clock screen uses a ring-shaped set of bars to indicate the current volume level. It features bright white numbers on a black background, and can be adjusted in brightness to either low to high. Changing the brightness requires holding down the rear clock button, and unlike most other iHome clock radios, there aren’t steps between the extremes. 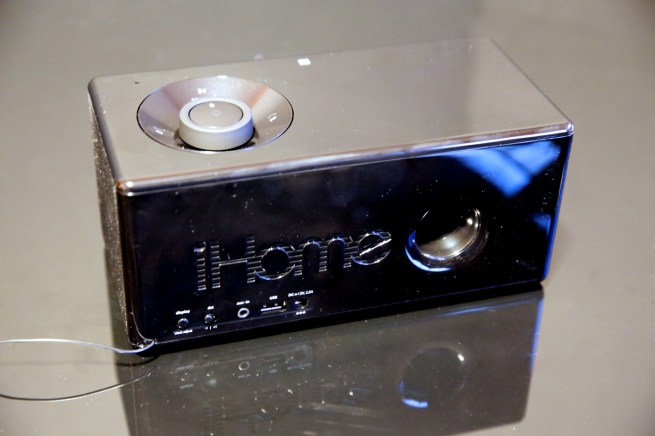 Dropping the dock enabled iHome to clean up iBN10’s top a lot, as well as to reduce its depth relative to most iHome models. Audio connections are handled through a stable Bluetooth 3.0 wireless connection or an aux-in port on the back, the latter of which iHome handles by including a 3.5mm audio cable. An FM radio with six presets is built into the unit, along with a non-detachable rear antenna wire. Given radio’s decline and iHome’s near-abandonment of even larger AM radio antennas, we wouldn’t have minded if this feature got the chop in the name of minimalism, too. But for those who like FM radio, the feature’s there and tunes stations pretty clearly, with only a slight static hiss evident on strong stations. There’s also a USB port with enough output to refuel iPhones and iPods at peak speeds.

As a desktop Bluetooth speaker system, iBN10 sits in an interesting middle ground between increasingly popular portable models. On one hand, you have small, certainly portable speakers such as Jawbone’s Jamboxes and UE’s Mini Booms, while there’s also growing demand for larger, not-really-portable speakers such as Beats Pill XL, Braven’s 850 and the Big Jambox. Because it’s larger and has four nice-sized speakers inside, iBN10 is far more powerful than the small systems, coming close to the big ones in frequency response and volume. Even though it falls a little short of pricier systems in the bass department, when it’s heard in isolation, iBN10 presents songs with a nice (though unadjustable) balance of highs, mids, and lows given its price. The sound is clearer than many of iHome’s dual-speaker clock radios, and the peak volume level is enough to fill a small room. 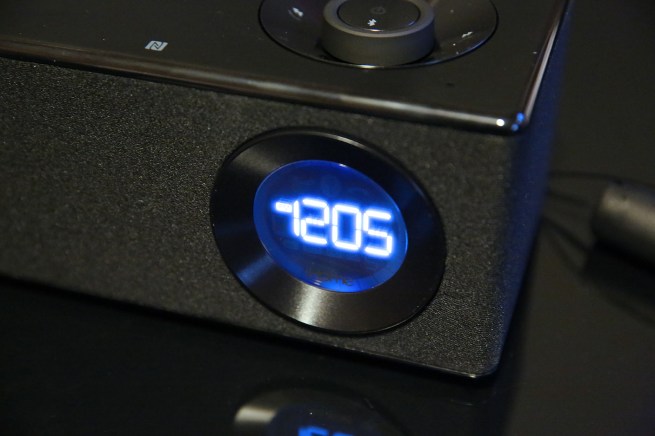 On the other hand, iBN10 is a little quieter than top big portables, and at high volumes, more distorted on the low end. Stereo separation is also a little unusual, because three of the speakers (two left, one right) are to the left of the clock, while the fourth is on the right side. iBN10’s speakerphone performance is good enough that callers described us as intelligible and only a little muffled, though they said the speakerphone in the iPhone 6 was clearer.

So why is this sonic performance “interesting?” Mostly because of pricing. At $120, iBN10 is priced below both the small portables and the large portables – the latter by a factor of 1/2 – while including a clock, radio, and speakerphone functionality. All you give up is portability. By contrast with the typical midrange iHome unit, you gain extra speakers and clarity if you’re willing to give up integrated alarms and a dock. Given the price, clean design, and sound quality, it’s a good pick for some people, whereas others will prefer the dock and alarm frills of a standard iHome clock radio. From our perspective, iBN10 isn’t perfect, but it’s appealing enough to win a space on an executive’s desk, which is precisely what iHome intended. As a bedside stereo, it’s a compromise that favors beautiful form over function.

iBN10 is currently available for under $112 via Amazon, and direct from iHome.