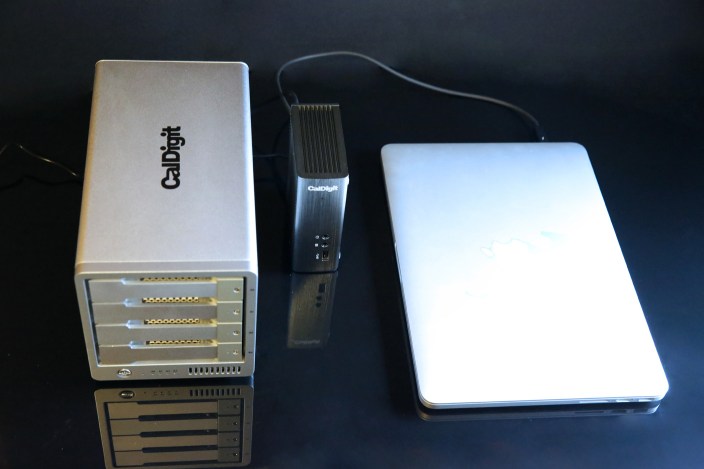 Despite USB 3.0’s growing popularity with consumers, Thunderbolt remains a viable alternative for professional users, particularly video makers willing to pay a premium for guaranteed high speeds. Over the past year, several Thunderbolt 2 hubs have come to market — boxes with one Thunderbolt 2 connection to a computer, one for a Thunderbolt accessory, and multiple ports to connect USB, audio, video, and Ethernet accessories. The idea: keep all of your gear hooked up to the hub, then use a single cable to connect it all to your Mac.

Known for large, heavy, professional-grade Mac accessories, CalDigit has just released Thunderbolt Station 2 ($199), which squeezes the same functionality offered by Belkin’s $300 Thunderbolt 2 Express Dock HD and Elgato’s $230 Thunderbolt 2 Dock (review) into a smaller, denser-feeling enclosure, at a lower MSRP — sort of. In reality, Thunderbolt Station 2 has some very specific benefits and one limitation that place it on par with its competitors, making the choice between them a more personal decision… 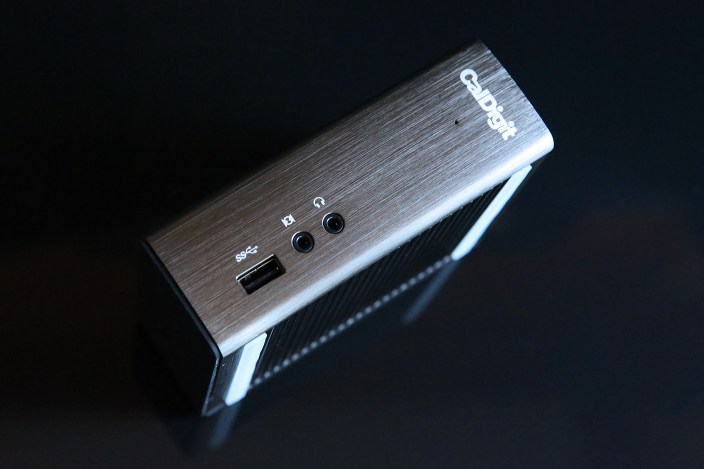 Thunderbolt Station 2 doesn’t look like a typical Mac accessory: measuring 4.9″ by 3.8″ by 1.75″ and made almost entirely from brushed gunmetal-colored aluminum, it’s closer in design to a small Western Digital hard drive than a typical Thunderbolt hub. Despite the fact that it’s not a unibody-molded frame, it feels solid and resilient, dispensing almost entirely with plastics. A small blue power light on the front turns on only when Thunderbolt Station 2 is connected to both wall power and a computer with a Thunderbolt port.

Unlike Belkin’s and Elgato’s Thunderbolt hubs, which are much longer and only designed to be mounted horizontally, Caldigit places rubber on two of Thunderbolt Station 2’s sides: a large black pad on the “bottom” lets the hub stand upright like a mini tower, while two frosted white bars on the “right side” are for horizontal placement. Regardless of the orientation you choose, slippage and metal or desk scuffing are not going to be issues during normal use. 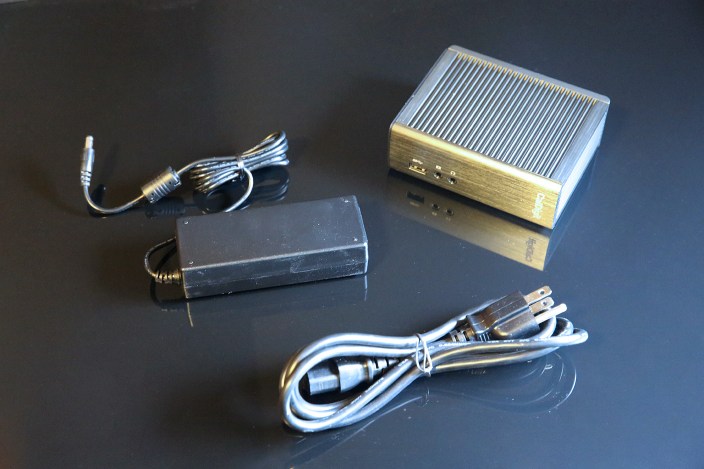 Thunderbolt Station 2’s obvious limitation relative to its competitors can be spotted in the photo above: unless you’re willing to pay $35 more than the base $199 price, Caldigit doesn’t include a Thunderbolt cable. This brings its price up to $234, more than Elgato’s MSRP for the widely-available Thunderbolt 2 Dock – and a premium over Elgato’s current $200 street price on Amazon. In other words, Thunderbolt Station 2 is only the least-expensive Thunderbolt dock on the market if you self-supply a key piece necessary to use it. Who would have guessed that Thunderbolt accessory makers would still be treating Thunderbolt cables as optional pack-ins, nearly four years after they were first released? 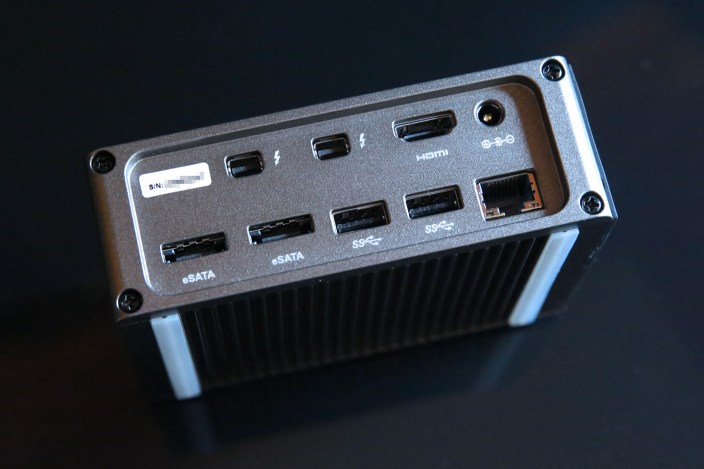 The unit’s back reveals its primary assets. Just like its rivals, you get a total of three USB 3.0 ports — one on the front, two on the back — plus two Thunderbolt 2 ports, an Ethernet port, an HDMI port (with support for 2K or 4K output), and a power input. Caldigit differentiates Thunderbolt Station 2 with twin 6Gbps eSATA ports for hard drives, a feature Belkin and Elgato likely didn’t include because of eSATA’s already modest and declining use in the Mac storage world. If you’re still using an eSATA drive (or two), this particular hub will let you connect it to any Thunderbolt-equipped Mac, though it will share the Thunderbolt 2 connection, reducing eSATA’s standard (unshared pipe) advantage over USB.

We had no issues with Thunderbolt Station 2 during hands-on testing. As was the case with other Thunderbolt docks we tested, each of the devices we connected worked as expected: clean HDMI output, fast Thunderbolt 2 and USB 3.0 transfers, and proper audio output to headphones. The aggregate throughput performance of this hub is subject to the standard caveat that all of the connected devices are now sharing a single pipe into your Mac, so speeds will vary based on how many and what type of accessories are plugged in.

There’s also one small power-related wrinkle: Thunderbolt Station 2’s rear USB ports will not send power to external devices unless a computer is connected and turned on. Thankfully, the front port is continuously powered, so you can recharge either your iPad or iPhone even when there’s no computer attached and the front power light is turned off. 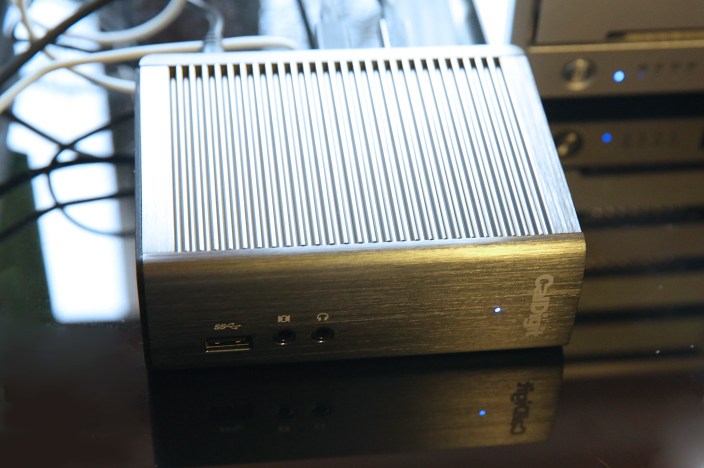 Thunderbolt Station 2 is a welcome alternative to the Belkin and Elgato Thunderbolt 2 hubs that are already on the market. It’s definitely a winner if you’re looking for the smallest option, the hub with the lowest MSRP, or the one with eSATA support — any one of these factors might make a difference to you. But if you don’t mind a larger footprint and don’t need eSATA support, the $200 street price of Elgato’s Thunderbolt 2 Dock includes the Thunderbolt cable that Caldigit’s $199 bundle omits, and you’ll get nearly identical features. There’s no clear winner here, but you now have several good options to choose from.