Apple has its own magnetic charging bracelet for Apple Watch, but it will likely be limited to retail displays to keep devices on retail store floors charged for extended periods of time. In addition, the company has developed a special case capable of storing and charging 10 Apple Watches at once, allowing retail employees to help customers wanting to try the Apple Watch on in-store.

An FCC application for the Apple Watch Magnetic Charging Bracelet was recently published online detailing “a stainless steel magnetic charging bracelet which includes an inductive charging coil to charge the Apple Watch.” The bracelet is attached to a 1-meter cable, allowing all of the Watches under Apple’s glass-topped table to stealthily get juice.

The metal band appears to be visible, lined on the inside of the Apple Watch’s band, if you look closely in the shot of the display case from Apple’s press event below. 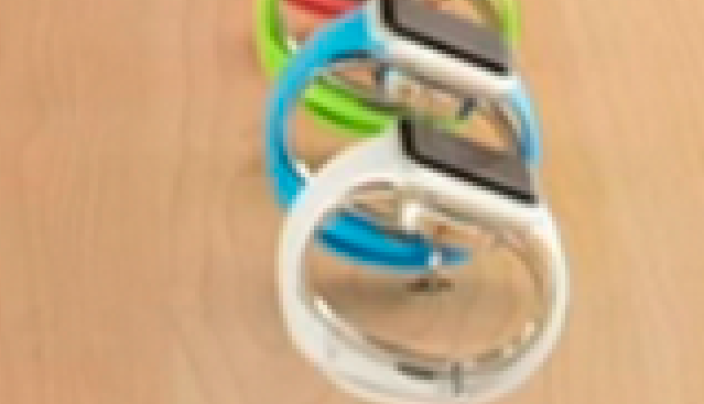 It sounds a lot like Apple is using this solution to avoid using the magnetic charger that comes with Apple Watch, in order to have a more streamlined look in display cases, avoiding unsightly cables or blocking the design of the watch itself.

The magnetic charging bracelet doesn’t have a battery, but other companies have announced charging bracelets that do include an integrated battery. Apple has its own selection of Apple Watch bands that will be available as separate accessories when the device launches, but it hasn’t yet revealed any other accessory plans.

In addition to the magnetic charging bracelet, the company also has a charging try-on case which includes 10 Apple Watch magnetic charging cables, each 2 meters in length. This will help retail employees facilitate in-store try-ons for some units while keeping others safely sealed.

We confirmed earlier this week that Apple will be recommending but not requiring customers to set up appointments in order to try on Apple Watch at its retail stores. The Apple Watch will be available to preorder and test in stores on April 10, officially beginning in-store sales on April 24.