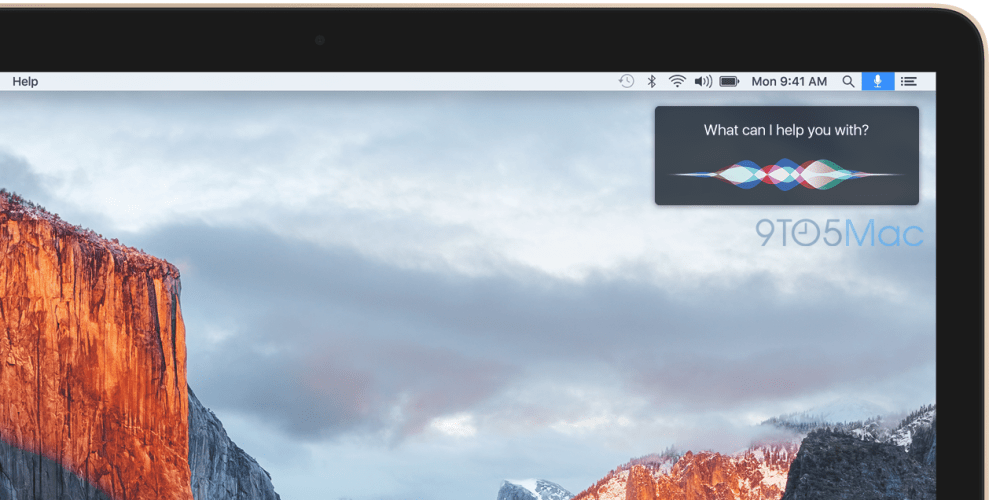 9to5Mac first reported back in February that Apple is planning to finally bring Siri to the Mac starting with OS X 10.12 later this year. Apple’s voice assistant started on the iPhone in 2011 and has since made its way to the iPad, Apple Watch, and Apple TV, so bringing it to the Mac is expected to be a tent pole feature in the next major software update. With the next big update to the Mac operating system set to be introduced in a few weeks at WWDC, new images have surfaced purportedly showing how Siri’s iconography will appear on the Mac.

In our original report, we shared that Siri will be accessible on the Mac in part through a menu bar icon similar to Spotlight search and Notification Center:

Instead of integrating Siri as a swipe menu akin to the Mac’s Notification Center or as a full screen view like on the iPhone and even the iPad Pro, Siri for the Mac will live in the Mac’s Menu Bar. Similar to the Spotlight magnifying glass icon for search and notifications icon for Notification Center, a Siri icon in the top right corner of the menu bar will activate the voice control feature.

Following our reporting, MacRumors has shared what it believes is an early look at how Siri’s menu bar will appear (at least for now):

As you can see, the screenshot shows the word ‘Siri’ wrapped around a box. The report cites reliable sources in providing the screenshot, but speculates that the appearance could change before OS X 10.12 ships in the fall. Apple’s software betas often go through visual changes between WWDC and shipping in the fall as well.

We’re also expecting Siri on the Mac to support the voice activation phrase ‘Hey Siri’ for hands-free use:

Siri on the Mac will have its own pane in System Preferences and users are said to also have the option to choose a keyboard shortcut for activating the service. Like with recent versions of iOS, users will be able to enable Siri at the first startup of OS X 10.12, according to sources. If the Mac running the new OS X version is plugged into power, a “Hey Siri” command will work much like with recent iPhone and iPad models.

The latest report adds that Siri’s voice activation feature is currently off by default and can be toggled on or off in a System Preferences pane.

Finally, MacRumors has shared what it believes is a Dock icon for Siri on OS X 10.12. Much like other OS X features like Launchpad and Mission Control have removable Dock icons in addition to keyboard shortcuts and mouse gestures, Siri on the Mac is expected to feature a Dock icon as one activation point:

We’ll find out in a matter of weeks if Siri for the Mac is ready in time for OS X 10.12 (or MacOS/macOS/Mac OS) as Apple’s Worldwide Developer Conference is scheduled to kick off on June 13th in San Francisco. You can catch up on everything we expect to see with OS X 10.12, iOS 10, and the latest versions of tvOS for Apple TV and watchOS for Apple Watch in 9to5Mac’s roundup here.