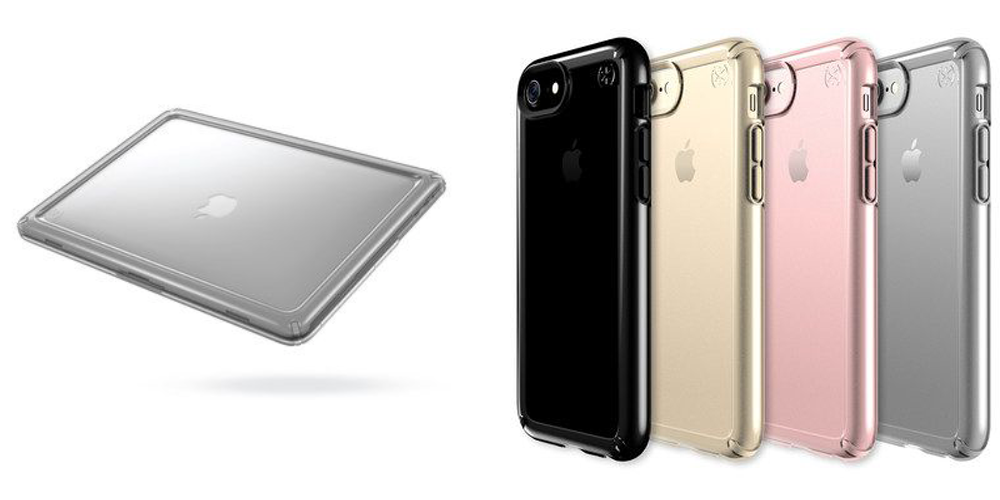 Speck is known for its transparent cases which protect MacBook models against scrapes and scratches without hiding them from sight, but they’ve so far done nothing to guard against impact damage from knocks and falls. All this is set to change, says the company, with its new Presido Clear range of cases, which protect against falls of up to four feet.

Presidio Clear for MacBook is made with Impactium Clear, a dynamic transparent material that absorbs and disperses shock upon impact and protects MacBooks from drops up to 4 feet. Impactium Clear is co-molded into a raised edge around the perimeter of the case that also provides a secure, no-slip grip, so you’re less likely to drop your device. The case’s dual-layer, two-piece design easily clips onto the MacBook.

Speck says this will be available sometime this quarter, with versions for other MacBooks following later in the year. The price will be $99.95.

The company is also upgrading its clear iPhone cases with additional impact-resistance, now providing protection against a 10-foot drop. The back of the case remains clear, while color-coded bumpers are being added around the edges.

Presidio Show was thoughtfully designed with the new iPhone 7 & 7 Plus in mind. The case features Speck’s Impactium Shock Barrier around the perimeter that provides 10-foot drop protection while the completely clear back shows off the phone’s design. Presidio Show comes in black, and will soon be available in gold, rose gold and silver, to perfectly match the different colors of the iPhone 7 & 7 Plus.

The black version of the new cases will be available shortly for the iPhone 6, 6s and 7 in both standard and Plus versions, starting at $39.95.

Both cases are made from UV-resistant materials which resist the yellowing with age sometimes seen with other transparent housings.

We’ve previously rated Speck’s iPad cases, and described the iGuy case as a must-have when iPads are used by young kids.