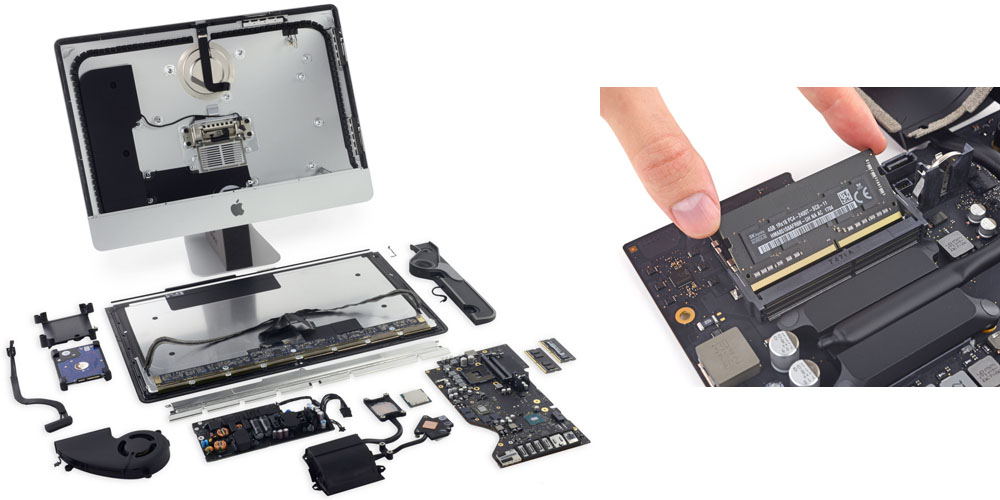 iFixit has wasted no time in carrying out a teardown of the new 21.5-inch iMac with Retina 4K display, and has found that the RAM is user-upgradable, and the machine has a modular CPU. This means that – in theory – even the processor could be upgraded at a later date …

Pigs have flown. Hell hath—indeed—frozen over. It’s Christmas in June! Our teardown confirms that the new 21.5″ iMac with 4K Display has both removable RAM and a modular CPU. Of course, Apple would say neither is user-replaceable. Accessing and replacing these components isn’t exactly easy, but we’re saying it’s possible. Maybe even probable. A tinker-happy user (armed with the right tools and guide) could at least double the base 8 GB of memory, turning their new iMac with Retina Display into an iMac Semi-Pro.

This is the first time Apple has had a 21.5-inch iMac with expandable RAM since 2013, and the first modular CPU since 2012. The RAM board is shown above right, and here’s the modular CPU:

The company does note that the choice of CPU format may have been forced on Apple.

Maybe Apple reverted to a socketed CPU because that’s all Intel has at the moment (we haven’t seen any desktop-class Kaby Lake CPUs in a BGA package). But you’d think with Apple’s famously fierce negotiating skills, they could have gotten a soldered CPU from Intel if they really wanted it.

Don’t expect upgrades to be easy, however.

Despite the upgradable RAM and CPU, we’re still giving this iMac a 3/10 for repairability. Here’s why: the iMac remains distinctly un-fun to open. Everything is buried under a finicky glass panel. It requires a speciality pizza-cutter-like tool to breach the adhesive before any repair. Plus the glass and Retina Display are fused together, fabulously increasing the cost of replacement. But hey, a 3/10 is triple the score of the iMac’s 2015 predecessor.

You can see more photos over at iFixit.