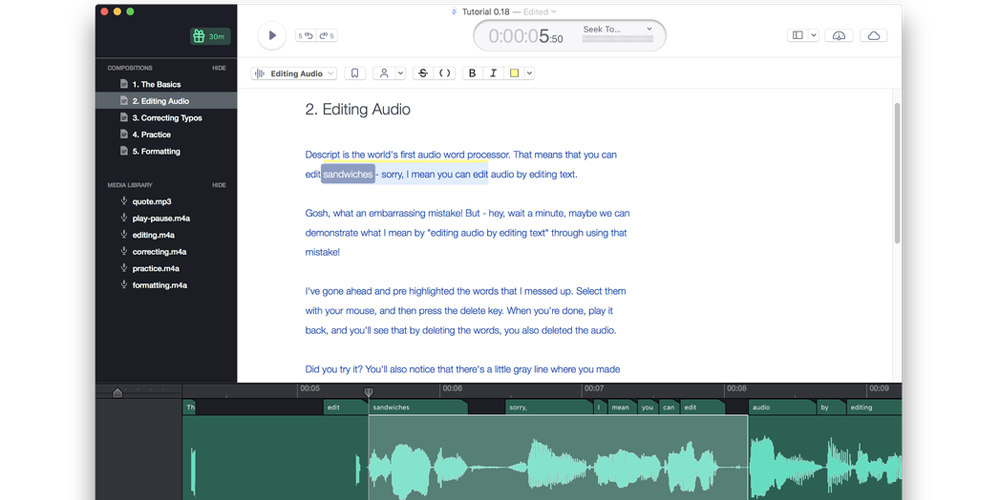 A new Mac app from the former CEO of Groupon claims to make to make audio file editing as easy as wordprocessing. Descript allows you to edit a transcript of the recording, and the changes are then automatically reflected in the synced audio file …

Developer Andrew Mason explained to The Verge how it works.

The app relies on text-audio alignment in order to work. A text-based transcription is generated from the audio file, and from there, the app uses machine learning to do a match between the audio sample and the text version of the words. A time code is assigned to each and every word, so that if you were to use the text editor to delete a word in text, it’s immediately synced with the audio file.

Mason said that it was the obvious next step after automated transcription, and will be a real boon to podcasters, but admitted that the syncing is not yet perfect.

Mason claimed that Descript gets a “surprising number of edits right the first time” but added that there’s also a waveform editor in the app so that users can continue to tweak the audio file or add light effects as needed.

It’s also not cheap. The Descript app is a subscription one, costing $20 per month, though it will have an introductory price of $10/month. Additionally, you pay 7 cents per minute to generate the synced transcription. The company said that subscription pricing offers greater flexibility to users, and a per-minute transcription fee is the norm in the industry, and that this is a lower fee than charged by competing services.

Mason acknowledged that the app could be abused to create fake recordings of other people.

“Even though we don’t intend to be on the vanhgard of the fakery, it’s coming one way or the other. But we’ve been through this before,” Mason said. “Basically what’s happened to photos and print before will happen to audio and video, and society adjusts. The credibility of a piece of content comes down to the credibility of the source.”

Descript is now available at descript,com (The Verge earlier incorrect stated that it would be available from the Mac App Store).