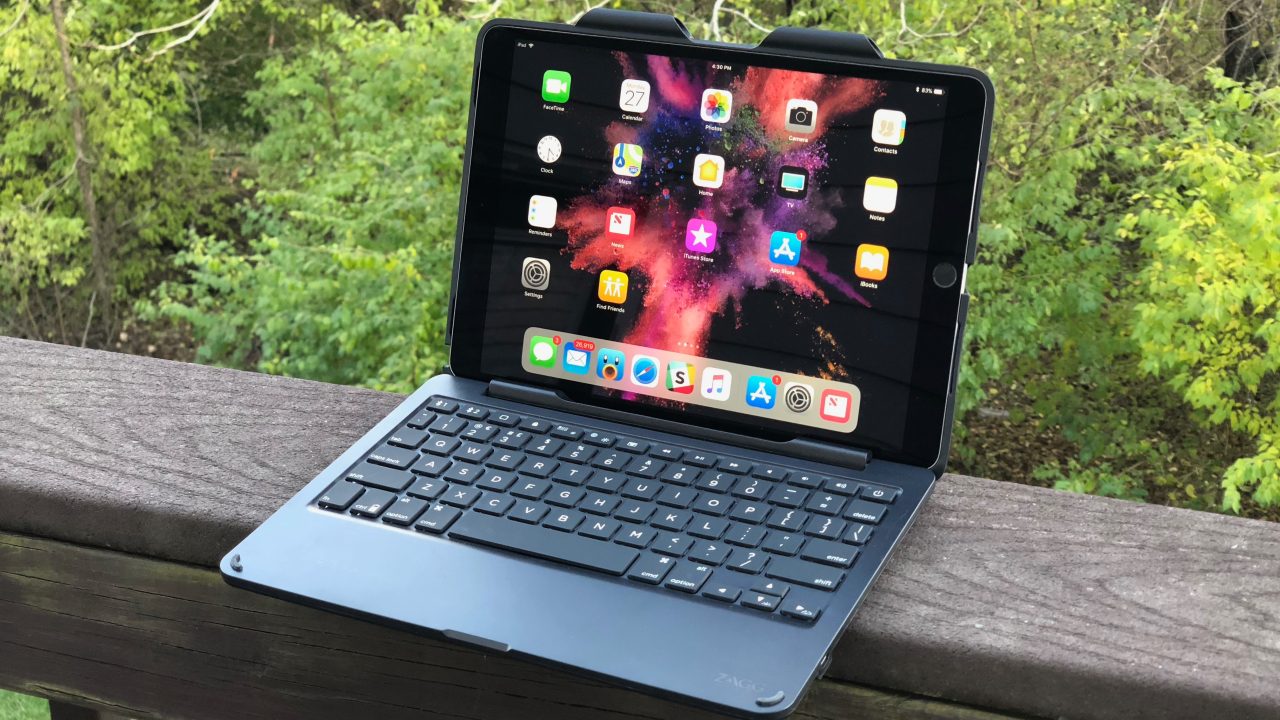 Last month, Zagg announced its new Slim Book keyboard case for the 10.5-inch iPad Pro. When we covered the announcement, we noted a few differences between Zagg’s offering and Apple’s own Smart Keyboard – including backlit keys, an Apple Pencil holder, and a slightly lower price.

As an avid Smart Keyboard user, I was eager to try Zagg’s Slim Book for the 10.5-inch iPad Pro. How do the two compare? Read on to find out…

The main advantage the Smart Keyboard has over Zagg’s Slim Book is the Smart Connector. This makes pairing with the iPad Pro a breeze, and it also means you never have to worry about having to charge the Smart Keyboard itself – it simply draws power from the iPad. While the Slim Book is easy enough to pair with standard Bluetooth, it would certainly benefit from Smart Connector support.

Pairing the Slim Book is pretty much the same as pairing any other Bluetooth device. You simply long-press the Bluetooth button on the keyboard and connect via the Settings app in iOS. It took me a few tries to get it paired, but I had few issues.

One unique thing about the Slim Book is that it supports dual Bluetooth pairing. This means that you can pair two devices to the keyboard and easily switch between them with the two Bluetooth keys in the upper-left corner. This is useful if you want to pair the Slim Book with your Mac or iPhone, in addition to your iPad Pro.

I’m a big fan of the Smart Connector – and I think there’s a lot more Apple and accessory makers can be doing to support it – so it’s a bit disheartening to see Zagg continue to resist it. Logitech remains one of the sole third-party accessory companies supporting it, so unfortunately you don’t have too many options there. Nevertheless, the Slim Book doesn’t suffer much because of its use of traditional Bluetooth pairing.

Typing on the Slim Book is similar to pre-Butterfly MacBook keyboards. This means you get a decent amount of key travel, whereas the Smart Keyboard and MacBook keyboards are a bit more stiff.

I’ve personally grown to love Apple’s keyboard design, both on the MacBook Pro and Smart Keyboard, so moving back to a keyboard like the Slim Book’s took some adjusting. However, if you’ve resisted Apple’s latest keyboard designs, or simply aren’t a fan, then the Slim Book is the way to go.

Furthermore, as you can see in the image above, you also get some palm rests on the Slim Book, which makes typing similar to a laptop and helps with in-lap use.

While some might slight the Slim Book for its microUSB charging, it’s ultimately a non-issue for most people as Zagg says you can get 2-years of battery life from the Slim Book. That figure is based on one hour of use per day. So, even if you use it for 8 hours per day, every day, you’ll still get several months of use before you need to charge it.

As I mentioned before, you’ll never need to charge the Smart Keyboard, which is certainly nice, but don’t let the microUSB charging be a reason for choosing Apple’s offering over Zagg’s. 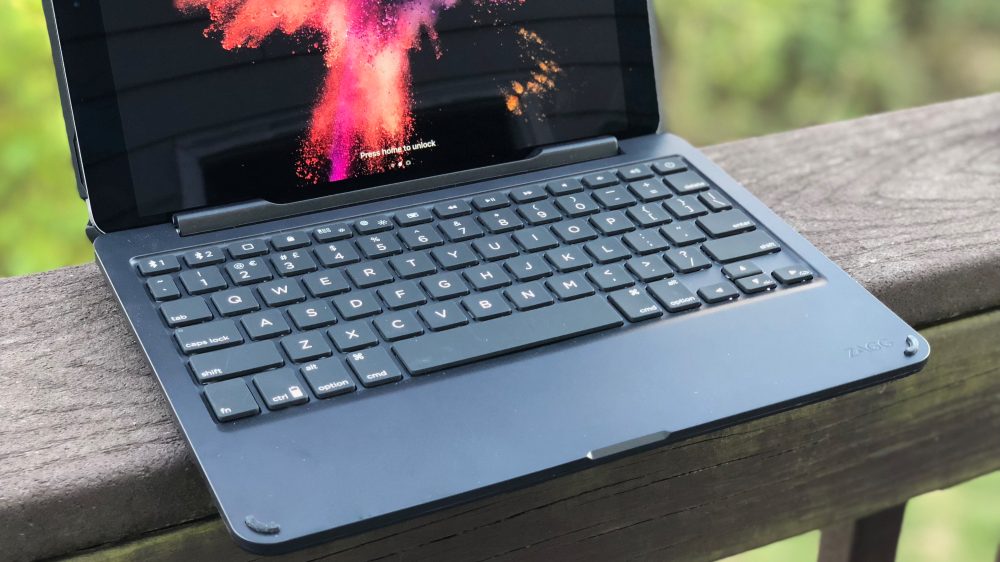 The Slim Book offers a case mode that completely detaches the actual keyboard in instances where you want to be ultra-portable. There’s also a video mode that uses the keyboard as a stand to make it easier to watch videos, and it’s far sturdier than the Smart Keyboard stand.

The Smart Keyboard is ultimately a much slimmer package than the Slim Book, ironically, but in exchange for that you lose some versatility. Personally, I prefer the slimmer design of the Smart Keyboard – but your mileage may vary. 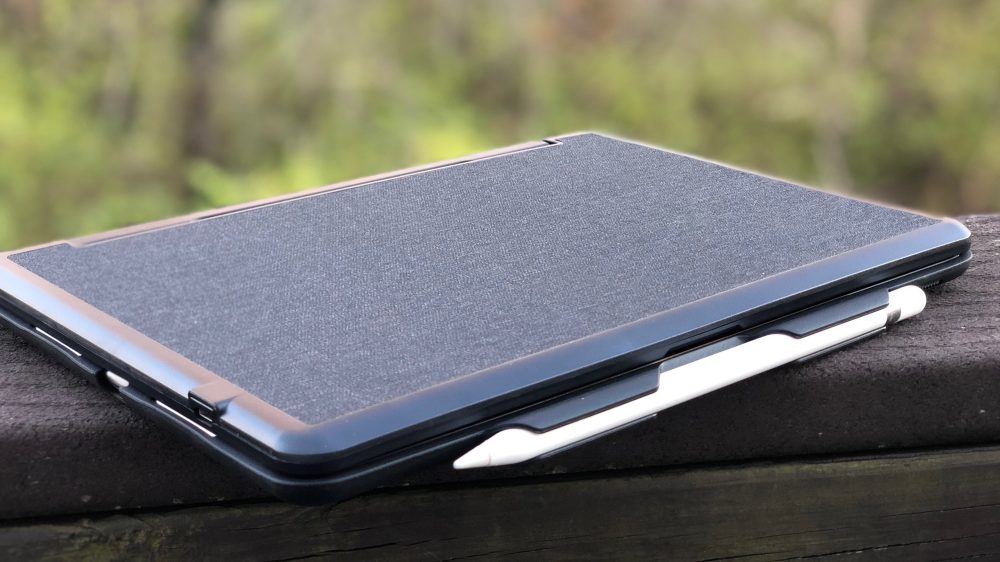 The biggest thing to me is the Apple Pencil holder along the top. I’ve spent far too many hours searching in couch cushions for my Apple Pencil, so the idea of having a place to securely store it when not in use is certainly appealing. While we’ve highlighted a few ways to keep track of your Apple Pencil with Apple’s Smart Cover, nothing beats a built-in holder.

Zagg’s Slim Book is also backlit, which makes typing in the dark significantly easier. While the lack of backlighting is something I’ve never really missed on the Smart Keyboard, it’s nice if you intend on using the iPad Pro in dark environments often.

The Smart Keyboard provides a much smoother experience in terms of integration with the iPad Pro thanks to the Smart Connector – but you pay for that. The Zagg Slim Book is a bit cheaper at $119 versus Apple’s at $159.

Ultimately, choosing a keyboard for the iPad Pro will largely be based on personal preference. The Smart Keyboard is similar to what you’ll find in a MacBook, which I personally enjoy, but you may view as a con.

The biggest advantage the Slim Book has, however, is its versatility. If that’s something you value, the Slim Book may be the way to go at $119.