Review: A look at two luxury leather backpacks for your MacBook and gadgets 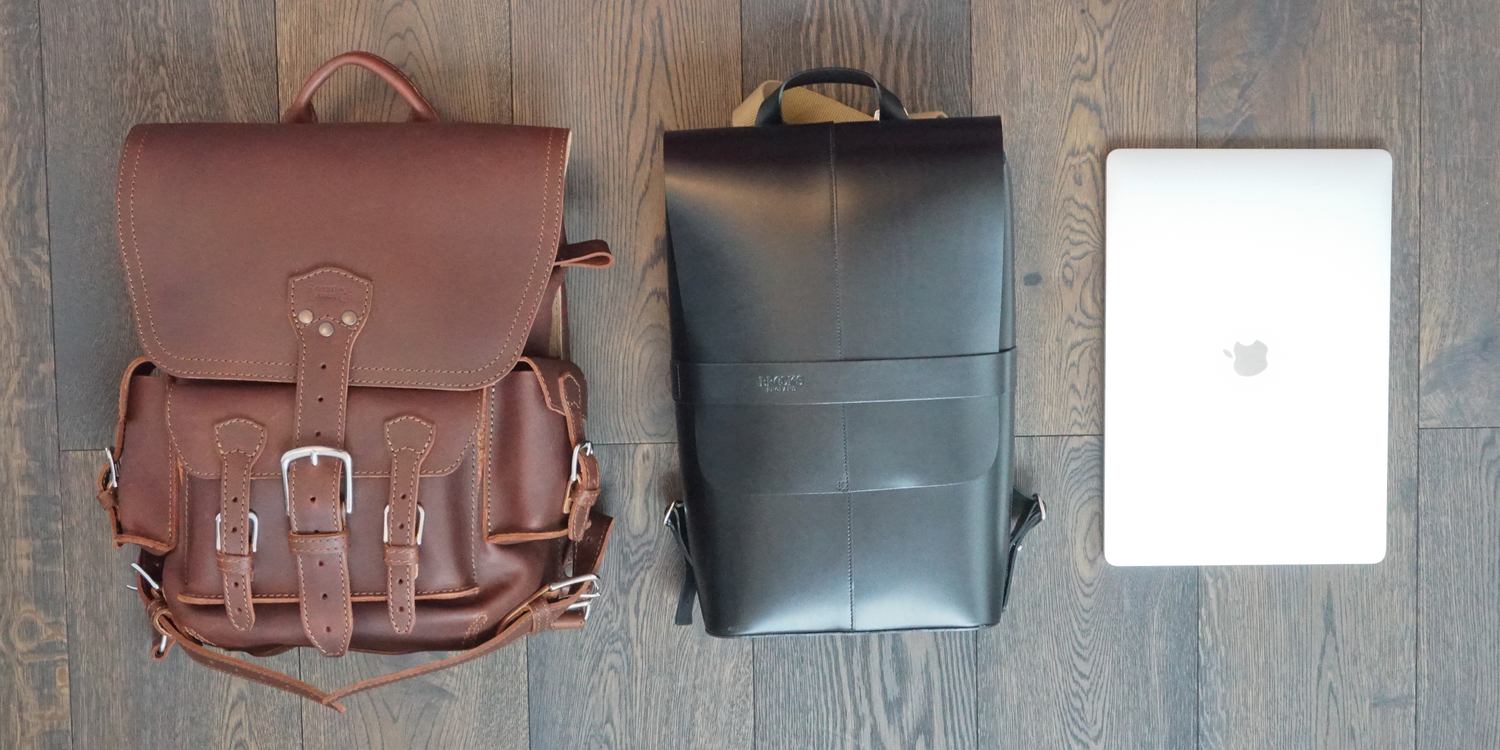 My name is Ben Lovejoy and I’m a bagaholic.

I admit it: I’m a sucker for bags. I seem to have a particular problem with backpacks – I couldn’t even begin to count the number I’ve had over the years. Some of them chosen for special features, like the anti-theft Riutbag and the easy-access Wolffepack, while others were chosen for more mundane layout reasons, especially when it comes to camera bags.

But whether clever or simply well-organised, few backpacks are beautiful. Most use the same Cordura nylon fabric, and a large majority of them are black. So my eye was caught by two leather backpacks made by premium leather companies, the Saddleback Thin Front Pocket, and the Brooks Piccadilly …

Let’s start with the bad news, which I’m sure you already guessed from the headline. When you see the word ‘luxury,’ you know it’s not going to be cheap – and that’s definitely the case here.

If you stop reading now, well, that’s understandable. Both sums are a lot to pay for a backpack. But then again, you could be paying $199 for a leather sleeve, and both bags are also made by companies with a reputation for high-quality products. Brooks is a famous English brand, founded in 1866. They are best known for their last-forever bicycle saddles, but also make bags and accessories. Saddleback was founded this century, but backs its bags with a 100-year warranty, so it’s likely you’re in good hands with either company.

While both bags are beautiful-looking, and either one would look perfectly at home in a boardroom or business class aircraft cabin, they do take different approaches. 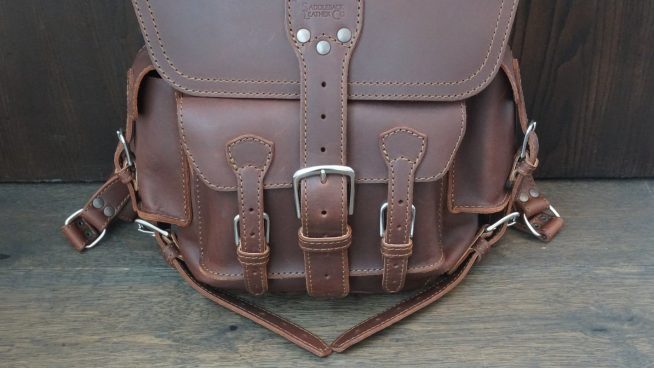 The Saddleback looks as traditional as they come. The look is a variation on a classic satchel. The leather is thick and heavy. Hefty shoulder straps. The contrasting stitching stands out as a design feature. A main compartment plus three outside pockets make it look ready to hold everything you might want to throw in it. And all the compartments are secured with traditional belt-style buckles. 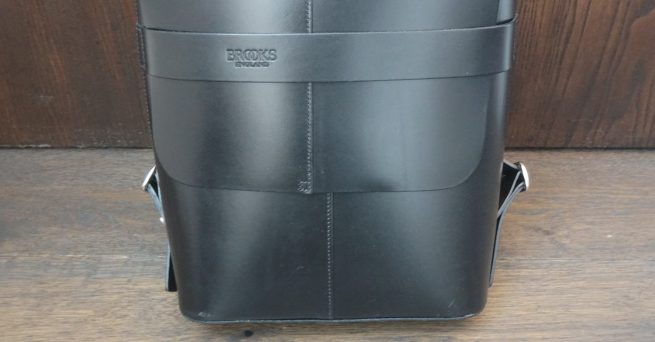 With the Brooks, you can see the cycling influence immediately. It’s all about being light and comfortable to carry even while riding a bike, so the bag is much lighter with much thinner leather. It’s still great quality, but it doesn’t have the heft of the Saddleback. It also has a much sleeker, more modern look. The flap is secured by tucking it into a stitched strap. There are no external pockets, just a suspended bag inside for small fiddly items. The shoulder straps are canvas.

Neither bag’s shoulder straps look like they should be comfortable! 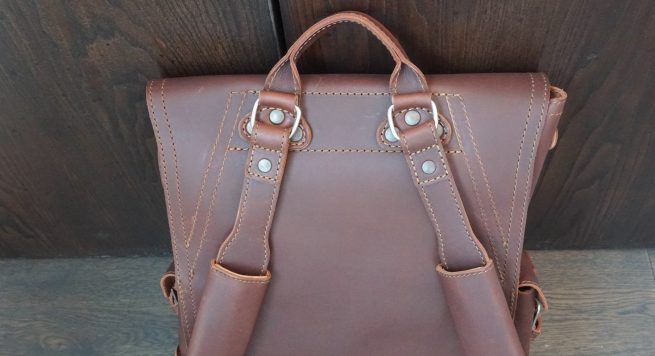 The Saddleback has belt-type straps with some leather loops you feed through them. There is a very pronounced ridge to the way this loop is stitched. If you put them on the outside, they look ugly. If you put them on the inside, they look like they would dig into your back – but in fact they don’t. I was aware of the ridges the first time I wore the bag, but quickly forgot about them. 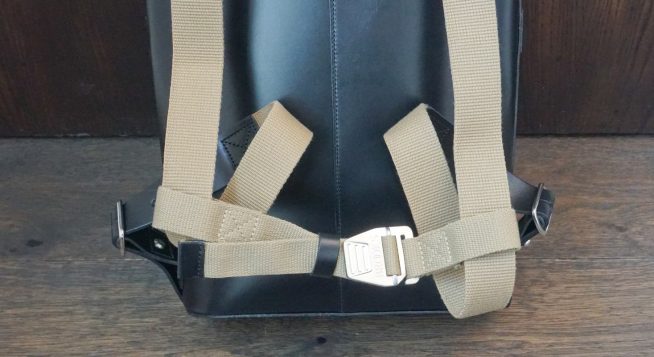 The Brooks straps look thin and like they might dig into your shoulders. I did have the benefit of fore-knowledge here, as I own one of the company’s bicycle bags, and the shoulder strap is made from the same canvas webbing – so I knew that was actually way more comfortable than it looks. The same is true here: it feels perfectly comfortable to wear. As it’s designed for cycling, there’s also a chest-strap. I’m not keen on these for wandering around a city, so do tend to get brutal with them and cut them off …

With camera bags, I’m a great fan of flexible dividers to keep everything safe. Typically you’re carrying lots of relatively small things – a body or two, several lenses, a flashgun or two and some associated paraphernalia.

But with laptop/gadget bags, I’ve found that dividers are actually a nuisance. They seem a good idea in principle, but they limit your flexibility in carrying things – and I also find the thing that I want has always disappeared into the bottom of one of the sections. So I was pleased to see that both bags have a single main compartment, with no dividers. 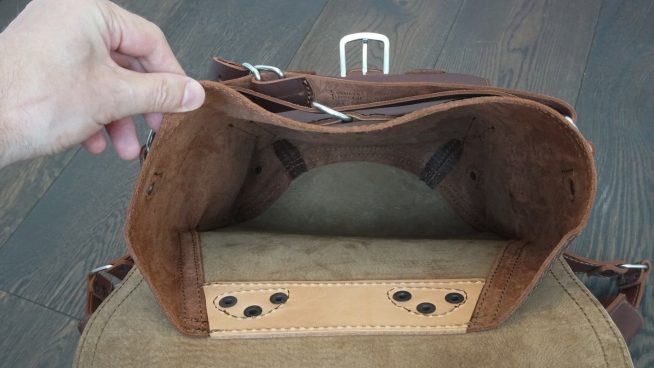 Of course, that does mean you need a sleeve for a laptop to protect it, but that’s a price I’ll gladly pay for flexibility, and I have a few of them.

Both bags comfortably accommodate my 15-inch MacBook Pro, 10.5-inch iPad Pro, Mac power brick and a thin jumper – with room to spare. That was a slight surprise with the Brooks, as it actually looks narrower than the MacBook, but it’s more capacious than it looks.

The Saddleback obviously has the advantage of the external pockets. I don’t need them for the stuff I typically carry around the city with me, but they are definitely handy to have. I think it’s just about small enough to qualify as a second piece of hand-baggage, so I’ll take this on my next trip, when the extra space will be very useful.

As I said at the outset, neither bag is cheap. But my bagaholicism does mean that I have a fair amount of experience of pricing for well-made leather bags, and these prices are nothing out of the ordinary. If you’re in the market for this type of bag, this is what you’d expect to pay.

The $100 difference between the two also feels about right. The Saddleback uses more substantial leather, and more of it, thanks to the external pockets and the straps.

Choosing between them does, I think, come down to your intended use. If it’s purely a city bag, then for me the Brooks wins out. It has a sleeker look, a thinner profile (more practical on public transit) and is lighter. It would also be the better bag for cycling, as you’d expect, though personally I’m not a fan of backpacks on bikes – they all leave you with a sweaty back.

If it’s for travel, then the Saddleback is likely the better choice. It’s still reasonably compact, but those external compartments give you places to put all the extra things you’re likely to carry when in transit or exploring a city other than your own.

I’d expect either one to last a lifetime. I’ve always had Brooks saddles on my bikes, and used my Brooks Moorgate cycling bag (sadly now discontinued) for several years, and am confident it will outlast me. I don’t have prior experience of Saddleback, but the quality is evident – and you can’t argue with that 100-year warranty!