Comment: Acer’s new Swift 7 shows the work Apple needs to do on its MacBook bezels 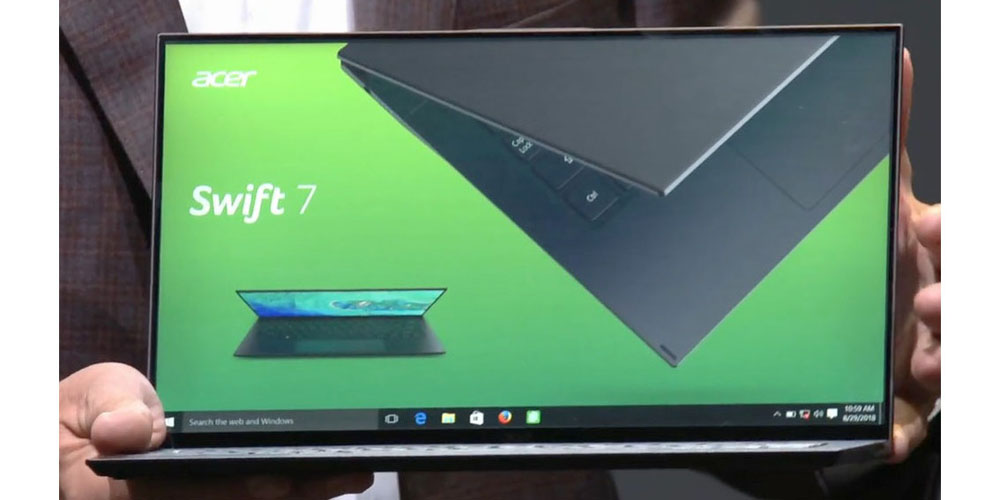 Acer has today teased the latest version of its Swift 7 laptop at IFA. The company hasn’t revealed much about it as yet, but The Verge reports that it has shared a few details.

This latest model is less than 10mm thick and includes an edge-to-edge display. The display is now 92 percent screen-to-body ratio, and overall the laptop weighs less than 2.2 pounds. Acer is shipping this new Swift 7 with an 8th generation Intel Core i7 processor, and it’s claiming that it’s the world’s thinnest laptop.

Not all MacBook Pro owners will agree than thin is necessarily good. There are those who argue that thicker batteries and more passive cooling capacity would result in a more useful machine. But the thing that does stand out for me about the Swift 7 is those ultra-thin bezels …

Apple has never tried particularly hard to reduce the bezel thickness of its computers, either in the MacBook or iMac ranges – something which has long struck me as odd when the company works so hard to make the machines sleek in all other respects.

It’s particularly strange when Apple has put so much work into reducing the bezels of the iPhone. That not only required a switch to new screen technologies, but required the company to find an alternative to its hugely popular Touch ID feature. We’re expecting to see that near-bezel-free look across all three of this year’s iPhones, and the new iPads.

Yet the MacBook Pro, updated just last month, has the same bezels thickness the machine has had for the past couple of years – and much the same as those they have had for very much longer.

Some might argue that bezel thickness is just as aesthetic issue, with no impact on usage. But I’d raise a couple of objections to that argument.

First, it’s not true. Smaller bezels either allows the machine to be more compact, or (and this would be my preference) a larger screen in the same size casing. That’s a practical benefit, not just a design issue.

Second, even if it were just about aesthetics, let’s be honest here: part of the appeal of Apple products is their sleek, minimalist design. Smaller bezels would be a complete fit for the Apple look. Just compare the 2018 MacBook Pro with the Swift 7:

Tell me that the Acer bezels don’t look more Apple-like than the MacBook Pro ones.

A further objection might be that thin-bezel laptops have had to reposition their webcams. Some have opted for the bottom bezel, others have even embedded them into the keyboard, giving a rather unflattering ‘chin-cam’ view.

As someone who uses the webcam only for occasional family video calls, that wouldn’t concern me unduly. But if you look at how small the iPhone X front-facing camera is, I don’t see it as an insurmountable problem. I’m of course not suggesting a MacBook notch, but even if the entire top bezel was as thin as the notch, it would still be very much slimmer than the current-generation machines.

It’s not just one manufacturer, either. The slim bezels were one of the things we noted about the Huawei MateBook X Pro.

At a time when both iPhone and iPad are doing their best to make the bezels disappear, it’s time for Apple to do the same with its Macs.

Do you agree? Or do you think it’s too much fuss about an unimportant issue? Or do you even think that thicker bezels are better, to help things like photos stand out from whatever’s behind the Mac? As always, please take our poll and share your thoughts in the comments.