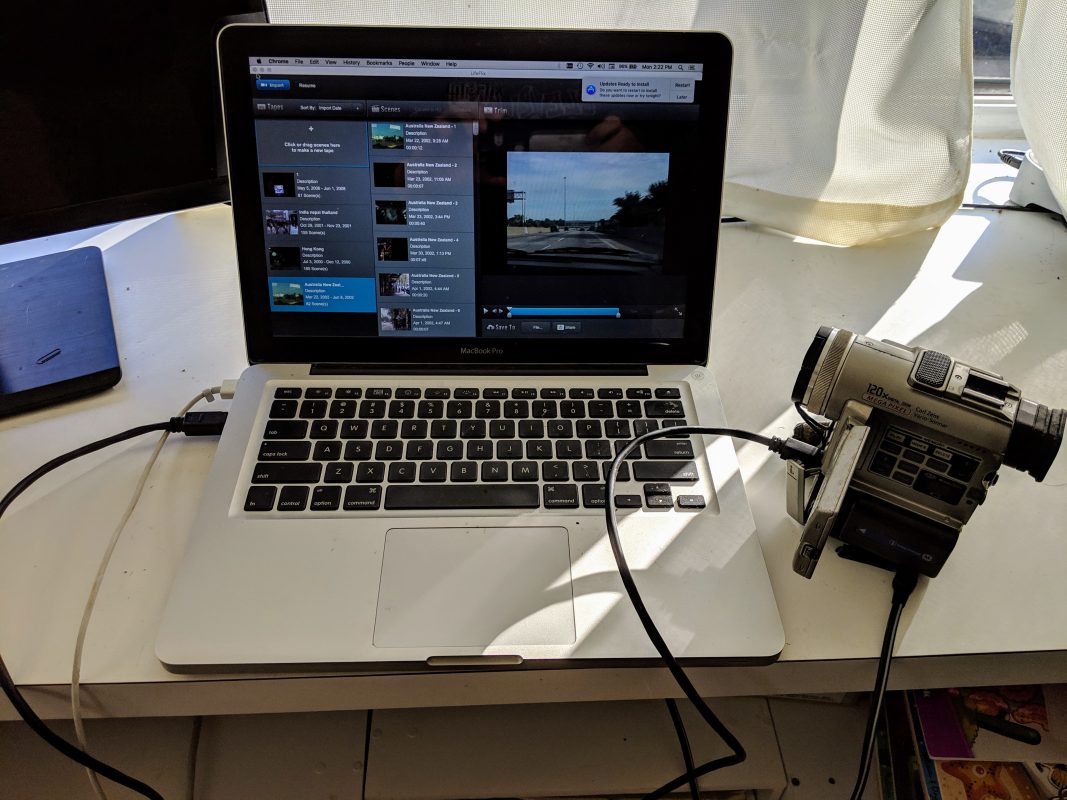 Something that has been sitting at the back of my mind forever is that pile of DV tapes I have in the attic which were taken before smartphone cameras existed. For one reason or another, I didn’t import them after I made them and now the FOMO is starting to creep in as the hardware to pull these videos off the tapes rapidly becomes obsolete.

LifeFlix to the rescue?

LifeFlix 3.0 is downloadable Mac OSX 10.7 or later software ($80 or $20 update with free trial available) which automates the mundane aspects of pulling videos off of old DV tapes. The TL;DR is that you throw in a DV tape to your Mac connected DV player, name the videos and hit import. Come back in an hour and you’ve got your scenes cut up and saved locally. You can combine the scenes or just take each scene separately into editing software, or just shoot them out to your file server, Youtube or social networks.

Once you are set up, it’s easy. But it does take some legwork to set up the hardware, especially if you don’t have access to circa 2010 hardware.

The heyday of DV tapes was from about 1995-2010. Before that, people used huge VHS tapes and after, people started taking videos with their smartphones, particularly the iPhone. They came in NTSC and PAL and were usually right around 480P resolution. More here. I’m assuming you have some of these on hand – that’s why you’re here.

I bought a Sony PAL Cybershot DV camcorder in Hong Kong after a year stint there in 2000. After a month in Hong Kong I recorded a round the world, year long trip onto about 20 DV tapes. It also took stills which I uploaded and exported through a variety of services. I started with Ofoto which got bought by Kodak Gallery which migrated to Shutterfly which I then migrated to Google Photos. That was relatively easy.

The videos were too time consuming to export at the time. So they all sat on the DV tapes that moved from apartment storage to house attic to house attic.

When LifeFlix approached me about reviewing their software, I thought it would be a great way to finally get all of those videos off the tapes — if they hadn’t been destroyed by time and multiple moves already.

I had the Cybershot and it still worked but you’ll need to find a camera that can play DV tapes if you don’t have one on hand.

To pull data off of DV tapes, you need the IEEE 1394 Firewire standard port. Much like Optical drives and other relics of the time, I didn’t have a computer with Firewire available to me. So I had two choices:

I opted for choice #2 but in hindsight I should have bit the bullet and just used a modern machine. The rationale was that I was only going to do this one time and while I knew it would take a little longer, it would be over shortly and my costs would be lower.

In practice, getting that old 2011 MacBook Pro up to El Capitan spec and then having to wait quite awhile for these things to import and then get crossed the network to my Synology NAS, probably added 10 hours to the task and I’m pretty sure at my hourly rate, I could have spent the money for the Firewire to Thunderbolt 3 Dongle chain a few times over.

Here’s what you should get if you have a Thunderbolt 3 equipped Mac:

Once you’ve got the chain hooked up to a DV Player – In my case, my Sony Cybershot was still working – You just fire up the LifeFlix software and hit import. You’ll be asked to name the files that will be coming in and then Lifeflix automates the whole process. Come back in an hour and you’ll have the whole tape spliced up into seperate scenes.

Overall, this is solid software that does what it is supposed to extremely well. The interface is a little dated (about to where you’d expect for DV editing) but the software does the job that it’s paid to do. I didn’t have any glitches even with 10+ year old hardware and tapes. Now, a weight is lifted off my mind that these memories wouldn’t be lost forever and I won’t have to pay a fortune to get them off the tapes and onto my computer.