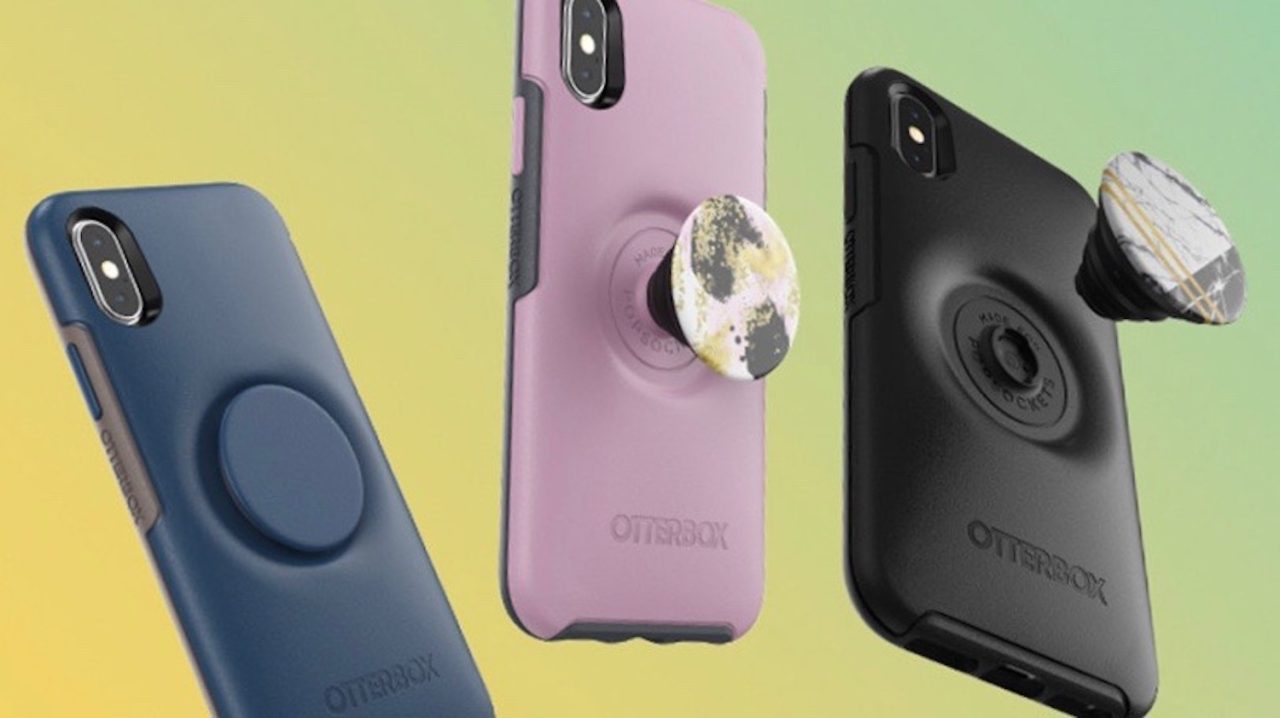 OtterBox announced at CES 2019 today that it is partnering with PopSockets on a case designed specifically with PopGrips in mind. PopSockets are the incredibly popular plastic circles that people are attaching to the back of their iPhones.

The Otter + Pop case is part of Otterbox’s Symmetry Series, which is its sleek line of cases for the iPhone. On the surface, the Otter + Pop looks very similar to other Symmetry cases, but the back is where things get interesting.

On the back, you’ll find a built-in PopGrip. What’s notable here, however, is that the PopTop lays completely flush with the case. This means there is no bulge on the back of your iPhone because of your PopSocket when it’s not in use. This fixes one of the biggest annoyances with the traditional PopSocket design.

“OtterBox and PopSockets collaborating on an integrated case was a no-brainer,” said Jim Parke, OtterBox CEO. “Our fans love variety, customization and sleek protection. With Otter + Pop, we can deliver that in one thin iPhone case that combines our legacy of protection with all of the unique attributes that PopSockets delivers.”

Further, the PopTop can be removed with ease, allowing you to swap designs and even remove it completely if you so desire. Individual PopTops can be purchased starting at $8, allowing you to diversify your phone’s apparel.

The PopSocket has become an incredibly popular trend, especially among younger iPhone users. It offers several benefits, including easier one-handed use and providing a built-in kickstand. Many people, however, have found the cumbersome design to outweigh those benefits, but that seems to be the exact problem Otterbox is looking to solve.

The Otter + Pop cases will go on sale later this spring in three colors: black, blue, and mauve. According to The Verge will be available for the iPhone XS, iPhone X, iPhone 8, iPhone 8 Plus, iPhone 7, and iPhone 7 Plus. There is no iPhone XR version, and we’ve reached out to ask about the iPhone XS Max. Prices start at $59.95.

If you want to try out the concept of a PopSocket before dropping $60 on Otterbox’s case, they are available for under $10 on Amazon.

FORT COLLINS, Colo., Jan. 7, 2019 /PRNewswire/ — OtterBox Symmetry Series and PopSockets PopGrips are a match made in heaven. Championed by trendsetters everywhere, the combination is now available in a truly integrated fashion. Introducing Otter + Pop, a Symmetry Series case with built-in PopGrip and swappable PopTops to create a completely customizable experience for every look, style, scene or vibe.1

Otter + Pop is coming soon for iPhone in a variety of swappable, unstoppable combinations.

“OtterBox and PopSockets collaborating on an integrated case was a no-brainer,” said Jim Parke, OtterBox CEO. “Our fans love variety, customization and sleek protection. With Otter + Pop, we can deliver that in one thin iPhone case that combines our legacy of protection with all of the unique attributes that PopSockets delivers.”

“A case with an integrated, swappable PopSockets grip, made by the strongest case brand in the world, which happens also to be a Colorado company? Sounds like a good idea to me,” said David Barnett, PopSockets founder and CEO.

Otter + Pop combines the streamlined design of Symmetry Series with the versatility of a PopGrip to make iPhone easier to use than ever before. It starts with a sleek, one-piece iPhone case that protects against drops and bumps. The integrated PopGrip lays flush with the case when not in use and provides easier one-handed operation and hands-free viewing when needed most.

Swappable PopTops make customizing the case for any occasion a breeze. Each case comes with a case-matched PopTop color, but any swappable PopTop can be used with a simple turn and a snap to create a one-of-a-kind swappable, unstoppable look.

OtterBox innovates bold products that deliver confidence and trust in any pursuit. From its humble beginnings with a drybox in a Fort Collins, Colo., garage, OtterBox has honed and leveraged its expertise in manufacturing and design to become the No. 1-selling smartphone case brand in the U.S. and a leader in rugged outdoor lifestyle products.2

At the center of every OtterBox innovation is a deeper goal to effect positive, lasting change. In partnership with the OtterCares Foundation, OtterBox grows to give back by inspiring kids to change the world through entrepreneurship and philanthropy. To learn more about this mission, visit otterbox.com/givingback.

In 2010, Barnett was looking for a way to stop his earbud cord from getting tangled, and he achieved this by gluing two buttons to the back of his phone and wrapping the earbud cord around the buttons. As ugly as the buttons were, they worked. In the course of improving on the idea, he developed about 60 different prototypes, making the buttons expand and collapse via an accordion mechanism, so that they could function as both a stand and a grip. In 2012, Barnett launched a KickStarter campaign for an iPhone case that would have two PopSockets grips integrated into the case. In addition to getting successfully funded, the KickStarter campaign enabled Barnett to show the world his dancing prowess. Two years later, in 2014, Barnett launched the business out of his garage in Boulder, Colorado, and has subsequently sold over 40 million PopSockets grips around the world.

1 Symmetry Series is NOT protective against water. Will provide added protection against drops and shock.