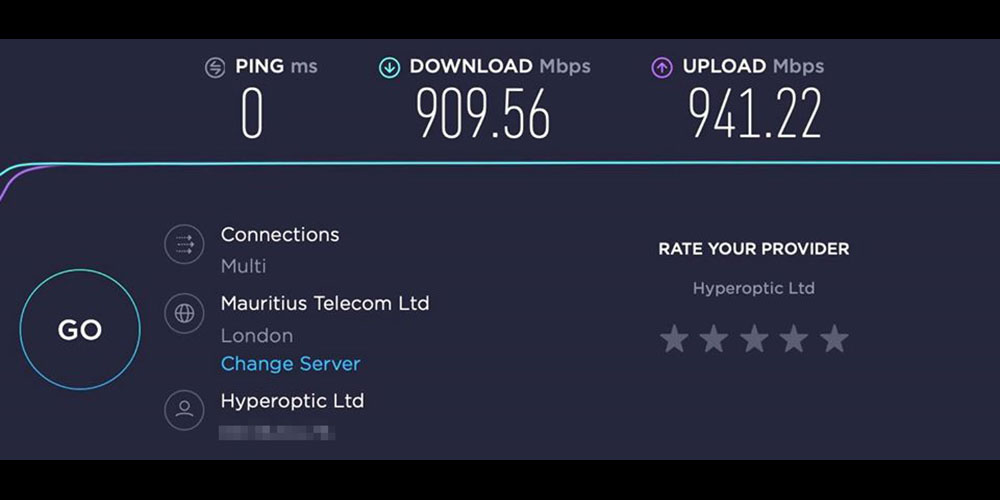 Sure enough, I now get very close to gigabit speeds on an Ethernet connection in my office (see above), and 5Ghz Wi-Fi delivers 2-300Mbps for both uploads and downloads elsewhere in the apartment.

There was, however, one aspect of the upgrade I was dreading…

The SSID of my old router was a historic accident, and I wanted to set a new SSID for the new one. My fear with that, however, was that it would break all my smart home device connections.

In theory, it shouldn’t have done. All Philips Hue devices talk to the hub, not directly to the router, so those should have been happy. The same went for the blinds, which also have a connected hub. Other devices should just need the new wi-fi credentials entered into the apps.

But, as we all know, networking — especially wireless networking — is one area of technology where theory and practice rarely match. Sure enough, moving over the hubs promptly resulted in “52 devices not responding” in the Home app.

My options appeared to be: One, give up on the whole idea and just use the same SSID as the old router; or two, spend many hours delving into the settings of many wireless device apps in order to update their Wi-Fi credentials.

I did begin the latter approach, but it was just too painful. Additionally, all the usual wireless networking phenomenon made themselves known: Things that should have happened didn’t; things that couldn’t happen did; things would randomly not work for a while then suddenly work; and vice-versa.

Which was when I hit on a genius solution, even if I do say so myself. I reverted the changes I’d made, then gave a new SSID to the 5Ghz network on the new router, but re-used the old SSID for the 2.4GHz one. Voila, all our smart home devices were duly fooled, while we could happily connect all our Apple devices to the 5GHz network.

There’s no real downside to this. 2.4GHz speeds are slower, but that’s irrelevant when the only data being sent or received is short commands and authentication for devices. All Macs, iPads, and iPhones use the 5Ghz network, and the router views them as a single logical network, so it doesn’t matter that the iPhone giving a command connects to one SSID and the device obeying it connects to the other one.

You do need to check your router works the same way. Most modern ones do, but there are exceptions, which view 5Ghz and 2.4Ghz as entirely separate networks. But provided they combine them, this is a completely painless way to upgrade broadband, or change your SSID, without breaking all your smart home kit.