Review: PhraseExpress is TextExpander without the subscription 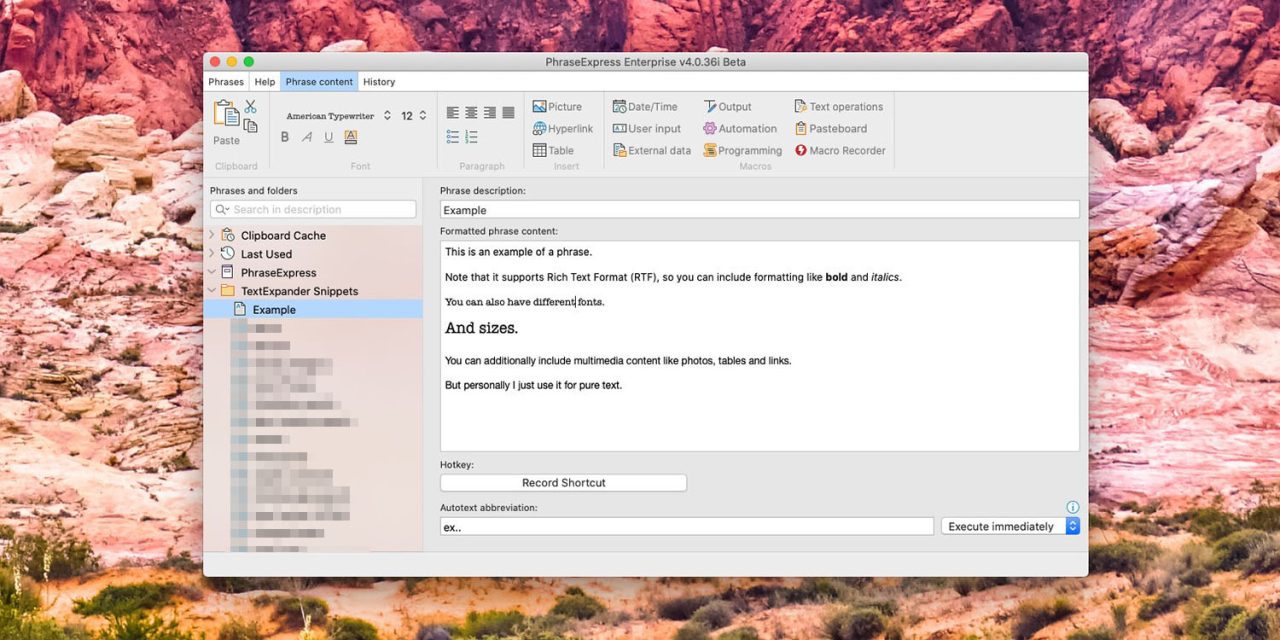 PhraseExpress is a Mac app that does the same thing as TextExpander, which I reviewed back in 2017. Both apps can be thought of as autocorrect on steroids. You type a macro shortcut of your choice, and the app replaces it with a full block of text – with can be multiple paragraphs.

TextExpander has been a game-changer for me, but it’s a subscription app, something about which I have mixed feelings. On the one hand, I do appreciate that recurring revenue is good for app developers, and increases the likelihood that an app will continue to be supported and improved. On the other, multiple app subscriptions can easily stack up to a hefty annual amount …

In principle, TextExpander gives you something worthwhile in return for the subscription: cloud storage of all your macros (‘snippets’ in TextExpander terminology) so you can access them on any device. In practice, that’s of limited value as iOS doesn’t support the macros, so the best you can do on an iPhone or iPad is to open the app and manually copy and paste the text.

So when I spotted PhraseExpress, a Mac app which works in the same way as TextExpander but is free for personal use, or offers a one-off cost for commercial use, it seemed worth taking a look.

Why is this type of app useful?

Many of us will need to send the same text relatively frequently. An example is giving visitors our address and directions. I include directions for public transit, cycling and driving, and the whole thing amounts to seven paragraphs. Now I type four characters and the whole thing unfurls.

Four characters, by the way, is a deliberate choice on my part. I wanted macro shortcuts to meet three criteria:

I hit upon a standard approach:

The latter is to guard against accidental triggering. You can use a specific trigger, which defaults to the tab key in PhraseExpress, but I find the double-period approach faster.

As a tech writer, I get a lot of PR companies emailing me with details of new products and services they’d like me to feature. Like, a lot. The majority of these are either not remotely relevant to me, or simply insufficiently interesting to cover.

The sheer volume of emails would suggest that the only sane way to handle them is simply to delete the ones that don’t interest me – but this creates its own problem. The more persistent PRs will send a second and sometimes a third email ‘just circling back’ to see whether the thing that wasn’t of interest last week has magically become interesting a week later.

I thus tried an experiment of responding to uninteresting ones with a form reply which asks them not to follow-up and gives them a list of bullet-points of things that do and don’t interest me. My jury is still out on whether or not this is a net time-saver, but it has led to the more on-the-ball PRs sending me pitches that address one of my stated interests, so I’m sticking with it for now.

I’m pleased to say this proved a big success, and really has helped manage my email inflow.

Converting from TextExpander is a breeze

If you’re not currently using TextExpander, you can skip this section, but the good news for current TextExpander users is that it literally takes about a minute to export all your existing snippets and then import them into PhraseExpress.

In TextExpander, right-click on TextExpander Snippets, and select Save a copy of group. Select your Downloads folder or anywhere else convenient to save it. Then quit TextExpander and open PhraseExpress. In the top menubar, click Import and then select the file you exported – and that’s it!

If you have your TextExpander snippets organized into groups, you have to repeat this for each group, but it’s still super-quick.

TextExpander calls them snippets, PhraseExpress calls them phrases, but I’m just going to call them macros.

If you have your macros set to ‘Execute immediately,’ then using one is as easy as typing the trigger. Otherwise, type the trigger and then hit the tab key.

For example, I buy most of my wine through Naked Wines, and one of the really helpful things about the website is the customer reviews. I prefix all my reviews by explaining my star system:

You can also set PhraseExpress to an autocomplete mode, where it will offer up matching macro text as you type it. I personally find that distracting, so I don’t use that.

One feature I really like is that you can exclude apps. For example, I was able to include one of my triggers (NW..) above without, well, triggering it. I could do this because I’m writing this in Chrome and simply selected Chrome as an excluded app. This would be handy for anyone who is concerned about the possibility of accidental triggering in apps which might require them to type codes, for example.

PhraseExpress also acts as a simple clipboard manager, saving your last ten cuts/copies. You can find these via the menubar icon then Clipboard cache.

One minor irritation: the app’s icon is a red exclamation mark inside a quote shape. It looks very much like a ‘something has gone wrong’ alert when you see it in the dock. You do have the option of hiding it in the dock, and accessing it only from the menubar, but the somewhat eccentric menubar UI means this isn’t very convenient. I really wish they’d switch to a less distracting icon.

The app also isn’t as pretty as TextExpander. It started life as a Windows app, and it shows. But the UI is straightforward, and you’re only looking at it when creating or editing macros, so I don’t personally see this as a big deal.

If you only want the app for personal use, then it’s free. However, if you use more than ten phrases (as almost anyone would), then it turns into nagware, with messages encouraging you to buy a license. For commercial use, you need a license.

There are three editions:

The tl;dr story here is that almost everyone will be happy with the Standard edition. (Professional adds SQL server support, which is recommended if you want to have shared phrases stored on a server accessed by more than 10 people. Enterprise has some more advanced functionality, mostly integrating with other services like translation.)

The price is a one-off fee for a lifetime license. Once you’ve paid it, the current version of the app is yours forever, and it includes any updates within a year.

This compares to $39.96 for a one-year subscription to the cheapest tier of TextExpander (Life Hacker, billed annually). This means you’ll break even after 15 months, and be saving money from month 16 on.

This, to me, makes it a no-brainer … except, there is one other option: Alfred. My colleague Bradley Chambers is a big fan, and the app includes text expansion among its many capabilities. I used to use it back in the dim and distant past, but haven’t done so for many years. I keep thinking I should revisit it, but it’s become one of those Catch-22 things: I’m sure it will save me time, but its very complexity means I’d need to find a decent chunk of time to explore it.

So I think my bottom-line here is, if you have time to get to know Alfred, you’ll probably want to trial that first. That too is free for basic use, and then offers a choice of £29 ($38) for a lifetime license for the current version, or £49 ($64) for lifetime upgrades.

But if all you want is text expansion, PhraseExpress is probably your best bet.

PhraseExpress is free for personal use (but nags you to license it), or $49.95 to buy it – which stops the nagging and allows commercial use.