Review: TextExpander is autocorrect on steroids, usable across Mac, iPad, and iPhone 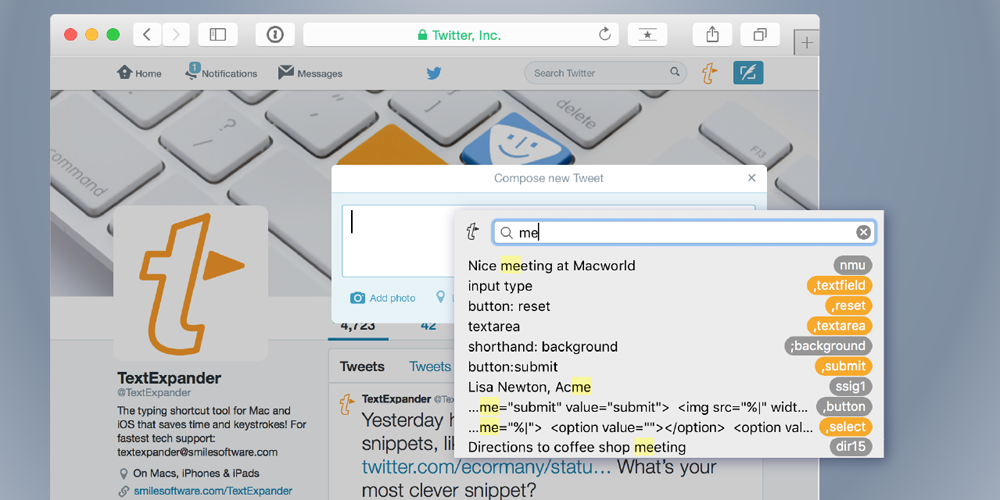 Autocorrect can be a mixed blessing. We’ve all experienced times where it’s a hindrance rather than a help, insisting on turning our perfectly valid words into something entirely unrelated – so much so that entire websites have been devoted to its alleged failings (even if most of them are made up).

But one of its real strengths is the ability to save typing effort. We can create our own abbreviations that then expand out into the full phrase or sentence. TextExpander is a cloud-based service that uses the same concept, but is, to borrow a phrase, insanely powerful …

To use it, you create an account and then download the app for each of your devices. There are apps for macOS, iOS and Windows. The ‘snippets’ you create can then be automatically typed into any app on any of these devices. Because TextExpander stores these in the cloud, you can create and access snippets on any device and access them on all your devices.

That’s the good news. The bad news is that, as a cloud-based service, the apps are free but the service is not: TextExpander is subscription-based. It costs $40/year or $3.30/month after an initial free trial. You do, though, get much more for your money than just a beefed-up autocorrect service – but let’s start with the basics.

My personal interest in TextExpander was driven by the fact that I have some standard email replies. As my quest for the perfect email app remains unsatisfied, I’ve been through quite a few of them over the years – including Apple Mail, Thunderbird, Postbox and Airmail. Each has its own approach to templates, so it seemed easier to have system-wide access to them.

As a tech writer, I get a lot of PR companies emailing me with details of new products and services they’d like me to feature. Like, a lot. The majority of these are either not remotely relevant to me, or simply insufficiently interesting to cover.

The sheer volume of emails would suggest that the only sane way to handle them is simply to delete the ones that don’t interest me – but this creates its own problem. The more persistent PRs will send a second and sometimes a third email ‘just circling back’ to see whether the thing that wasn’t of interest last week has magically become interesting a week later.

I thus tried an experiment of responding to uninteresting ones with a form reply which asks them not to follow-up and gives them a list of bullet-points of things that do and don’t interest me. My jury is still out on whether or not this is a net time-saver, but it has led to the more on-the-ball PRs sending me pitches that address one of my stated interests, so I’m sticking with it for now.

Different email clients have different methods for sending these semi-automatic replies, but TextExpander is easier than any of them. I’ve created a ‘P.’ tag (short for Pitch), and just typing those two characters pastes in the reply. I have similar two-character replies for other form emails.

Because the expanded text is stored in the cloud, it doesn’t matter which of my devices I’m using, it’s the same two characters on any of them.

TextExpander also works proactively, noting when you type the same text repeatedly and offering to create a new snippet for you. It only stores text locally, so it isn’t uploading your keystrokes to the cloud – only the snippets you actually save, and those are stored in encrypted form.

I’ve so far found this particular feature of limited use – it has been literally noticing two-word phrases and offering to create a shortcut for those. For example, when writing a couple of pieces related to share prices, it noted I’d typed ‘pre-trading’ twice. Similarly, in other pieces it suggested a shortcut for ‘between devices.’

These phrases are too short and infrequent to justify a shortcut, so I’d prefer it wait until I’ve used a phrase maybe half a dozen times in the course of a few days before suggesting it. You can switch off suggestions if they annoy you.

But the app goes way beyond fixed text, offering what the company calls Fill-in Snippets. This is mail-merge style functionality where you can have a standard text with blank fields for things like names or products. When you use the snippet, TextExpander prompts you for the customized text it should insert.

The fill-in function is extremely flexible. There are blank text-boxes where you can type in customized text, check-boxes that will add text if they are checked and drop-downs.

The most obvious use for this is to tailor a form email reply to someone, greeting them by name and including a personal reference of some kind. You can also use variables like %clipboard to insert the current contents of the clipboard. You could, for example, have a form email that includes the phrase ‘Thank you for asking %clipboard’ – you would then highlight their question and do a CMD-C to copy it before auto-replying.

But if you really want to get in under the hood, you can get as techy as you like. Nested snippets, where one snippet calls upon text stored in another snippet? TextExpander can do that. Use AppleScript to automate snippet management? No problem. Regular expressions via Javascript? Sure. There’s virtually no end to the geeky things you can do with it.

It also offers tools for groups, where you can share snippets with other TextExpander users – and there’s a more sophisticated version for organizations.

There’s one more trick TextExpander has up its sleeve: public groups. One thing that’s pretty much guaranteed with tools like this: if you need to do something, the chances are that other people do too. The public group feature allows you to share selected snippets with others – and to download sets created by other people.

You can find everything from Apple trademarks to Star Wars quotes. Getting access to the group snippets is as simple as clicking a Subscribe link. Once you do that, the set immediately appears in the app. For example, I subscribed to a Fractions set, which means I can type things like 1//4 and it will auto-change to ¼.

TextExpander is a really handy tool for anyone who needs to repetitively type and paste in standard text across multiple apps and devices. Even in its most basic form, the fact that I can access the same text in Mail on my iPad as I can in Airmail on my Mac makes it a far better solution than app-specific templates.

But if that’s all you want, there are cheaper options – like Pastebot. What TextExpander offers is a vastly greater feature-set than competing apps. The mail-merge style facility is incredibly powerful and would be a massive time-saver for small businesses. The proactive suggestions will be useful to many. And the ability to benefit from snippets created by other people through the public groups feature means that you don’t have to waste time reinventing the wheel.

Does all this justify a subscription model, costing $40/year? The answer to that question will be very personal, I think. If you use only the most basic features, probably not – you can get the same functionality from apps with a one-off cost. If you use the most advanced features, then $40/year is going to be a bargain.

Most of us will, I suspect, end up somewhere between the two. But my feeling after a few weeks of use is that it’s going to prove indispensable over time. The company offers a free trial, so check it out and draw your own conclusions.