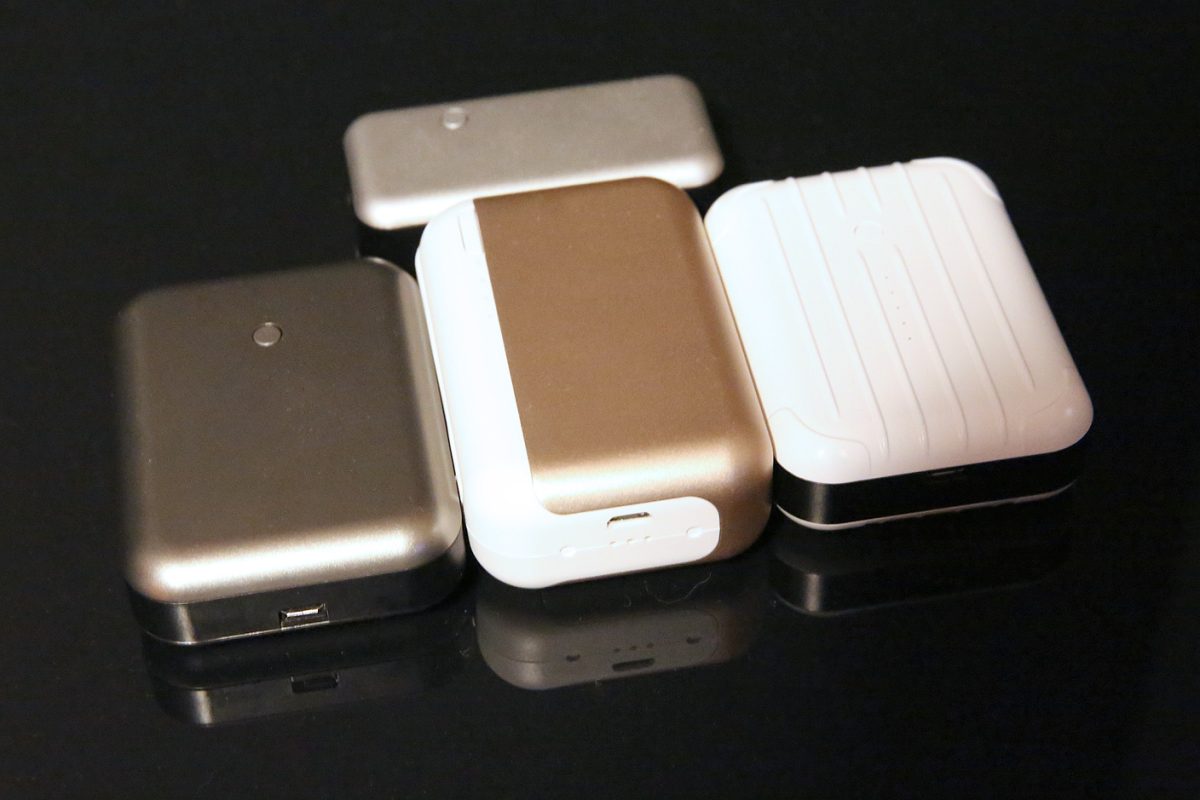 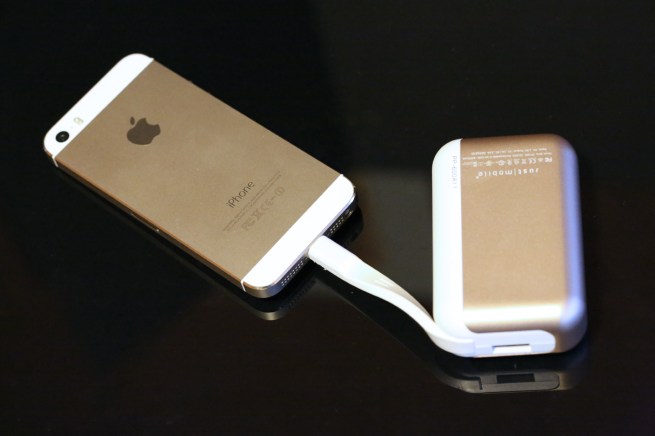 The secret to understanding USB battery pricing is that you tend to get what you pay for: cheap batteries lose their charges faster and can bulge and leak over time. Other companies specialize in selling atypically nice batteries that last longer and work better. Just Mobile is a leader in quality batteries: for the past six years, its Gum series (shown below) has spanned every Apple device type, size, and speed, but it has never built a Lightning cable into a battery before. That changes with the January release of TopGum ($80), which advances the company’s prior state-of-the-art Gum++ model in two ways: an authentic Lightning cable’s integrated into the battery’s left edge, and a matching magnetic battery charging dock is included. 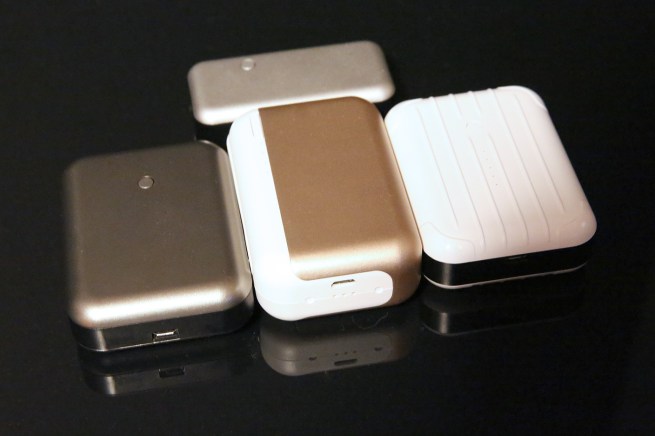 Of course, these features – and a choice of gold or gray metal exteriors – come at a premium over typical all-plastic batteries, so if you don’t need the cable or dock, you’ll be equally well-served with the company’s earlier batteries. Read on for the full story.

Conceptually, TopGum is very similar to the company’s earlier Gum++, which has come in two models since its release: a primarily metal version matching most earlier Just Mobile batteries, and a ribbed plastic model that resembles Rimowa luggage. Inside is a 6,000mAh cell, while the top and bottom feature a 1-Amp USB output and a 1.5-Amp micro-USB input, respectively. Like past Gum batteries, these ports work with whatever USB-to-Apple device cable you might want to self-supply, and with an included micro-USB to USB TopGum recharging cable. 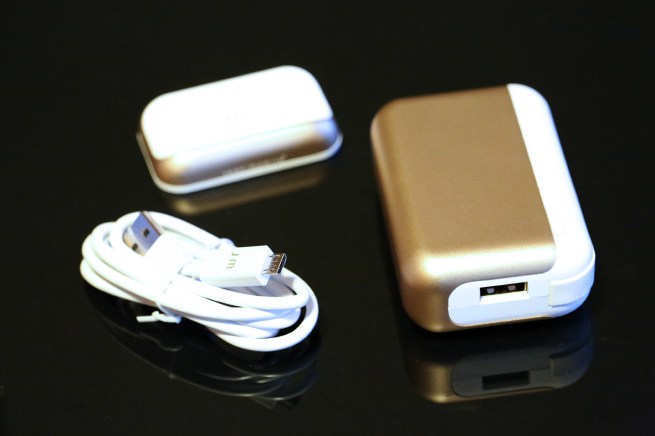 What’s new in TopGum are the size and features. Measuring 3.25″ tall by 2.1″ wide by 1.1″ thick, it’s taller and thicker than Gum++, though also a little narrower. The added size is due to the new 2.4-Amp Lightning cable on the left, which you slide up with a fingernail to pull out, producing a fairly case-compatible plug. There are also three dot-shaped recharging pins on the bottom. When connected to a device or to a recharging source, four bright pin-sized white LEDs on the front illuminate to indicate remaining power, controlled by an adjacent power button. 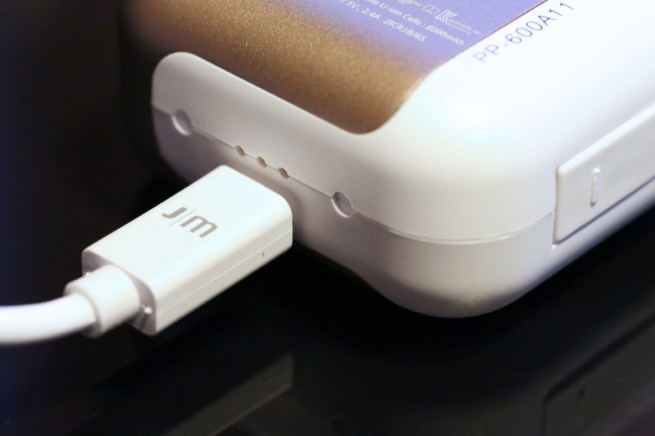 Upping the lux ante, you can choose from a fancy, iPhone 5s-matching gold metal with white plastic, or space gray with black plastic. We’d call the combination of materials tantalizingly close to attractive, offset by obvious seams and the material compromises inherent in blending a traditional metal Just Mobile battery with a rubberized cable. Just Mobile is always great with metal, and the gold part of the battery looks great, but the plastic accents here aren’t up to its usual level of polish. 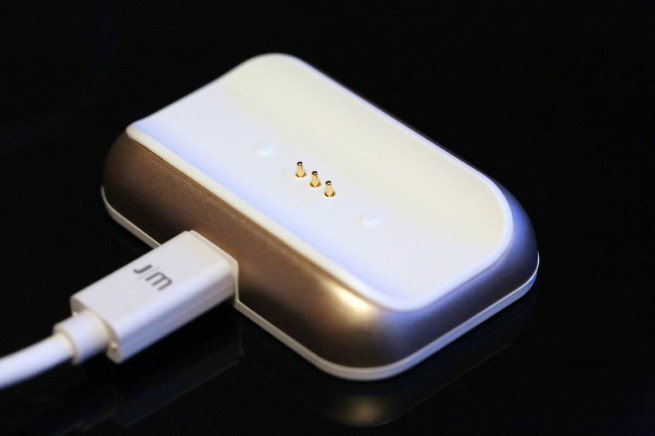 The included charging dock makes TopGum look a bit more premium and keeps the metal part of the battery’s bottom from scuffing on a flat surface. Just Mobile’s dock is metal-clad but mostly plastic, with three gold pins and tiny magnets that help with alignment and holding the battery upright. While we like how the dock looks, it’s lightweight, and will slip on a flat surface unless you pull covers off of two adhesive bottom tabs to hold it in place, then choose a spot where you want to keep it. Most likely, you’ll leave the dock at home when you take the battery out, but you may need to detach and carry the aforementioned micro-USB cable with you for recharging on the road. You have the ability to connect the cable to the dock or directly to the battery, as you prefer. 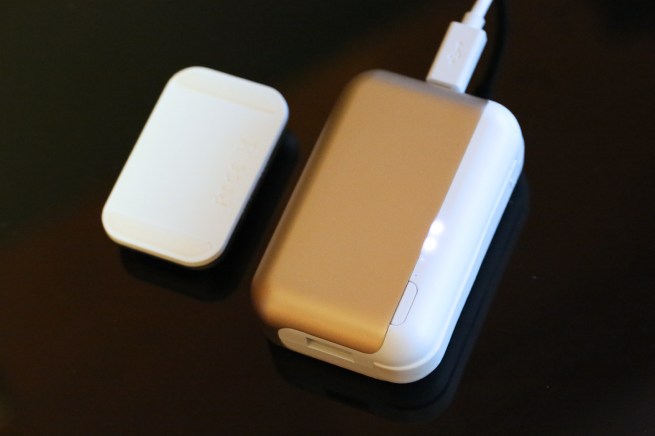 From a performance standpoint, TopGum is solid – an option that will either be ideally suited to more than fully recharging any iPhone, or partially recharging an iPad. The 6,000mAh cell delivered a 56% recharge to an iPad Air 2 in 1 hour and 39 minutes, a brisk clip. It also delivered a 135% recharge to an iPhone 6 Plus, requiring 3 hours 29 minutes for the first 100%, but only 49 minutes for the next 35% after the iPhone was drained down. Every iPhone and USB-charging iPod should expect closer to two full recharges, perhaps more. 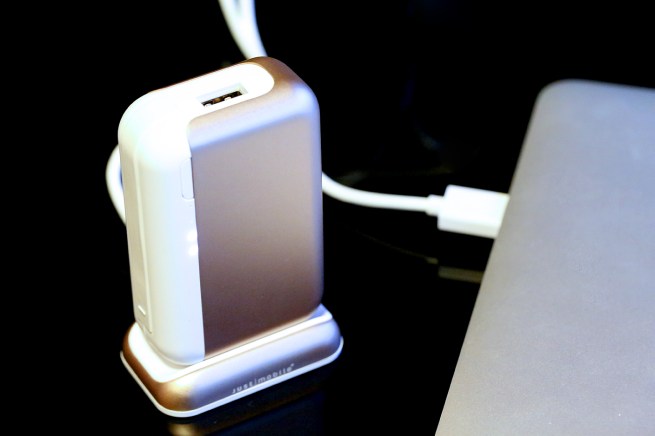 Due to its 1.5-Amp micro-USB input – and dependence on a self-supplied power supply or Mac USB port with 2.1-Amp output abilities – TopGum does take a bit of time to recharge itself, potentially over four hours. This isn’t a surprise by the standards of most pocket-sized batteries, though batteries such as uNu’s Ultrapaks are capable of self-refueling using included wall chargers in much less time – at higher prices for their capacities. Even Gum++ was capable of faster self-recharging if given a powerful enough wall or USB power source. 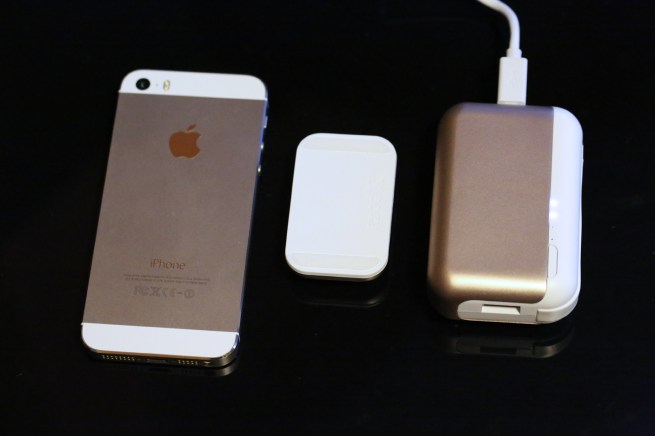 As USB battery packs go, TopGum is a good option, but not a slam dunk. If you love Just Mobile’s classic industrial design and want the convenience of a pocket-sized battery with a Lightning cable built in, it’s worth considering. But you can save some money by self-supplying a Lightning cable and going with Gum++ instead. At a time when the market is filling up with off-brand junk, we appreciate the fact that there are an increasing number of high-quality battery options out there; any current-generation Just Mobile option you pick will be a reliable and well-made performer.