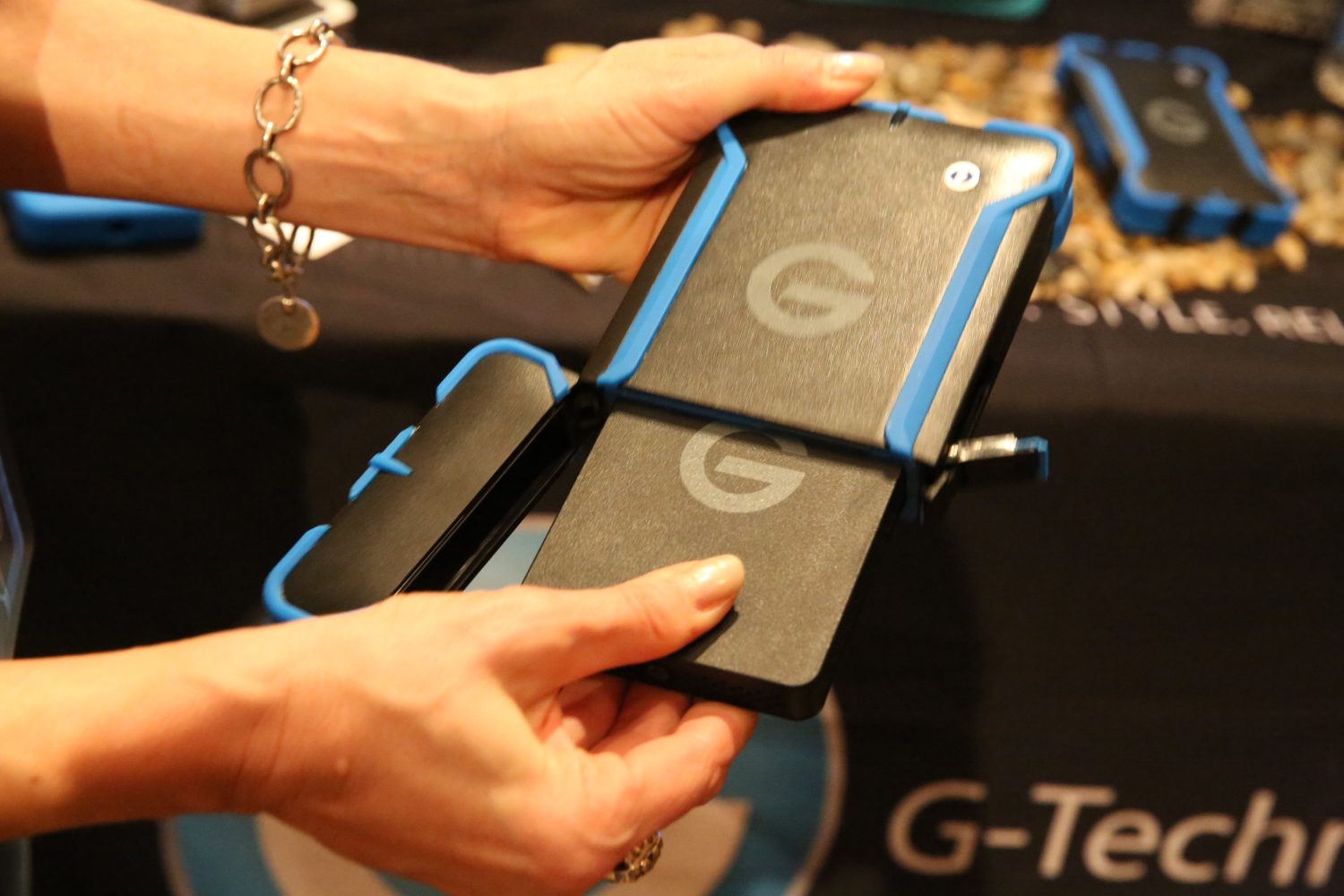 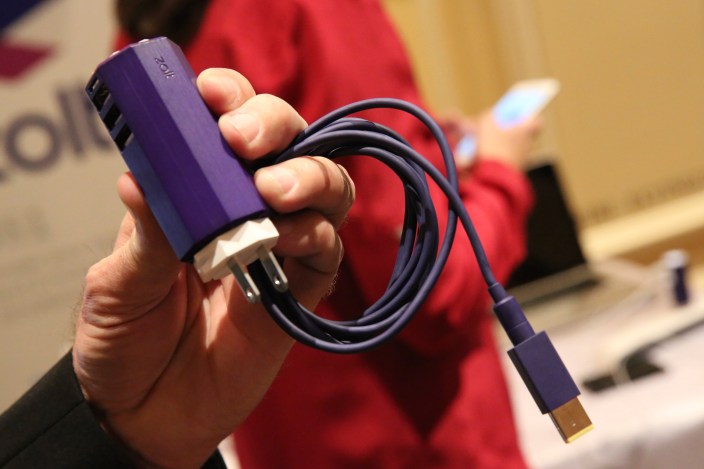 A MagSafe charger smaller than Apple’s but made by a third-party? Ruggedized rubber hard drives from a company known for Mac-matching aluminum enclosures? Synchronized stereo speakers with color-shifting mood lights for your bedroom? Yes, the annual pre-CES Pepcom event took place in Las Vegas last night, and these were just a few of the products we spotted on the floor. Read on for more details… 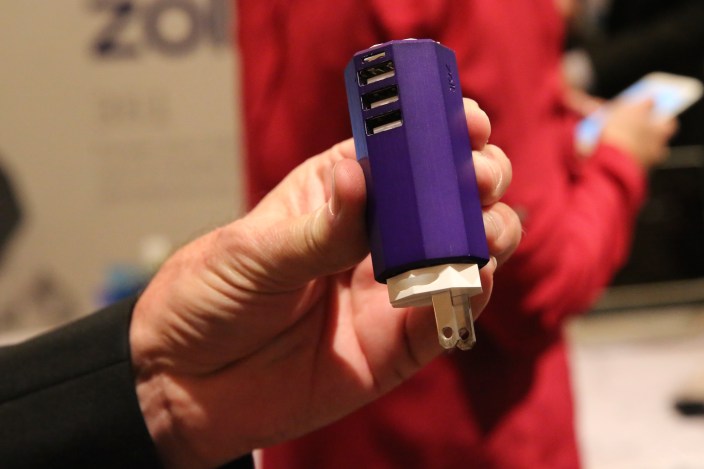 You may or may not believe that Zolt will be able to deliver on its promise of a $20 MagSafe adapter for its new 70-watt Laptop Charger Plus ($100), which it says is the smallest 13″ MacBook Pro/Air-capable charger around, and ships with a cable/tip set compatible with 90% of PCs. While we are very skeptical that Apple will license the MagSafe connector to the company – or anyone, really, given its track record – Zolt said that it was currently in NDA-covered discussions with Cupertino to make the cable happen. Apple users who don’t want to wait out that particular negotiation will find three USB charging ports on the side useful for charging non-MagSafe devices such as the iPad, iPhone, and iPod. 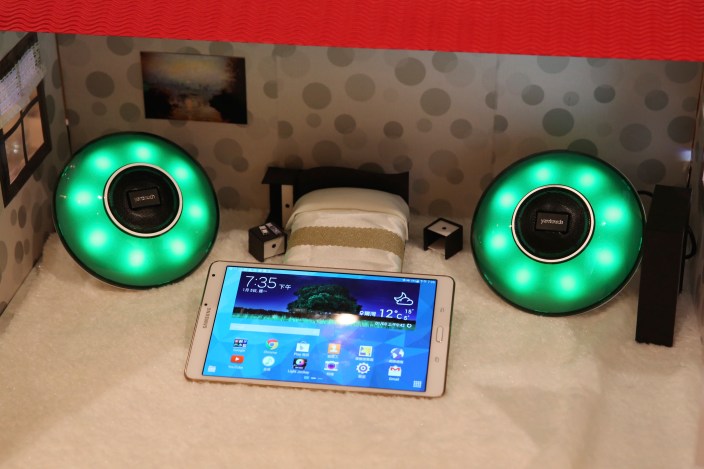 Yantouch, a Taiwanese maker of some pioneering color-shifting lamps and speakers, debuted Daisy ($130/$250), a new combination lamp and speaker with a few tricks. In addition to gently or abruptly changing colors and matching the beats of music, Daisy now can stream music from a single Bluetooth device to both speakers, separating their left and right audio channels. Yantouch also showed a new iOS app called Light Jockey capable of making granular, intuitive color changes to Daisy and the latest versions of its earlier products, the Jellywash (V3) lamp and Diamond (V5) color-changing speaker. 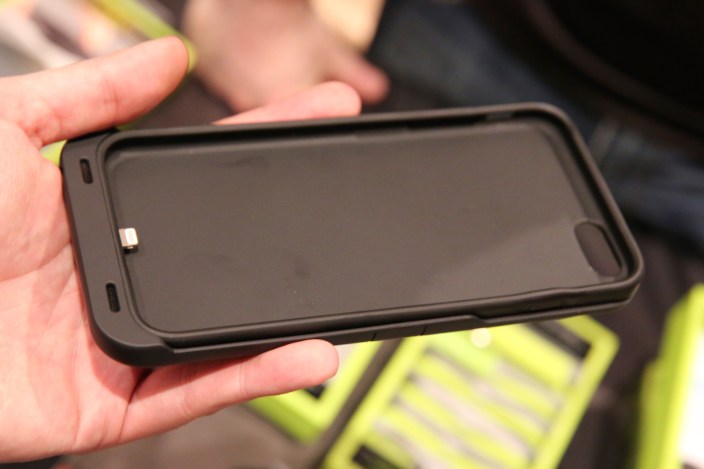 Tylt, creator of the 3200mAh iPhone 6 Energi Sliding Power Case we reviewed last month, debuted a new $100 iPhone 6 Plus version of Energi with 3500mAh – enough for a 91% recharge of a dead iPhone, according to the company. Like the earlier version, it has a case that detaches from a battery sled. 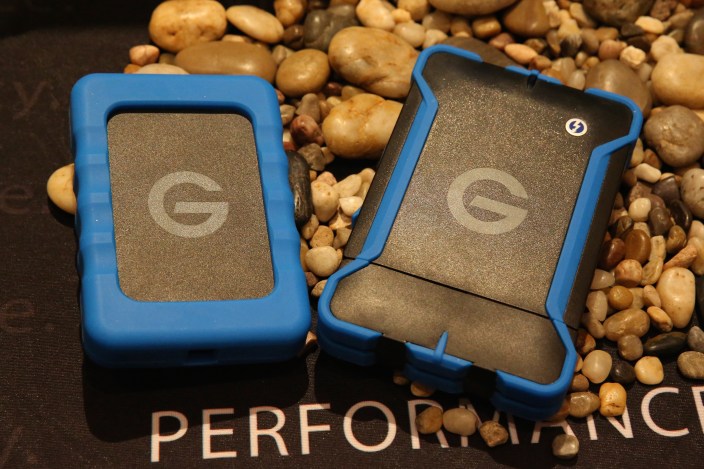 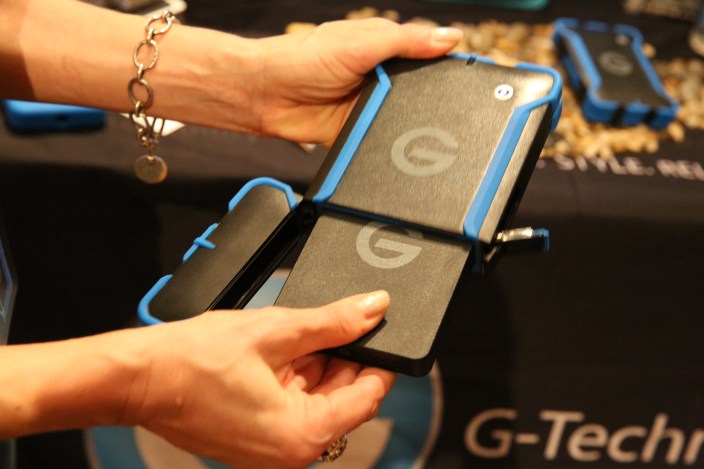 G-Technology, the Western Digital/Hitachi GST brand responsible for cool Mac-ready storage solutions, showed three new “rugged family” drives: ev ATC (1TB) is available in USB 3 ($180) or Thunderbolt ($230) versions, each shipped with a case capable of being dropped from 6 feet heights, submerged in water, and run over by cars. ev RaW (500GB/1TB, $100-$130) is a USB 3/SATA drive with a simpler rubber frame that enables it to withstand roughly 4.5-foot drops. They’re departures for the company, which traditionally has focused on all-aluminum enclosures but recently shifted somewhat to plastics in making Mac Pro-matching RAID drives. 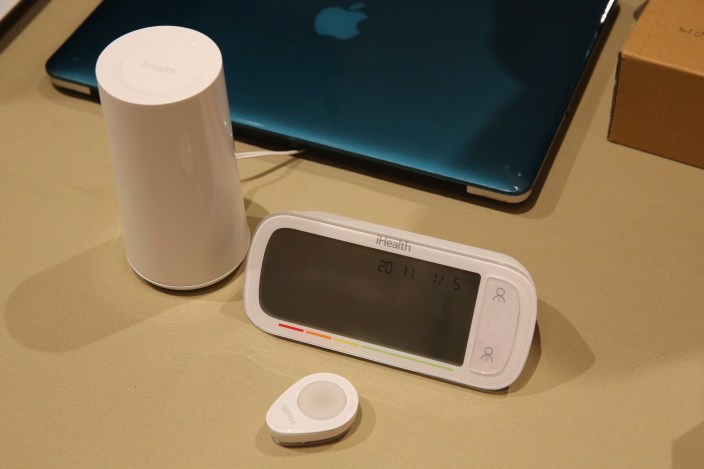 iHealth debuted iHealth Gateway, a new collection of personal health monitoring accessories made for senior citizens without iOS devices, all connected to a central hub that can be checked by caretakers or family members from afar. Glucose monitors, a fall monitor, a blood pressure monitor, and other options will all work with the Gateway hub. The devices will initially be rolled out to senior care-providing centers before making a consumer debut later this year. A new version of the previously-released Wireless Body Analysis Scale was also shown, adding temperature and humidity measurements to the prior device for a $100 price. 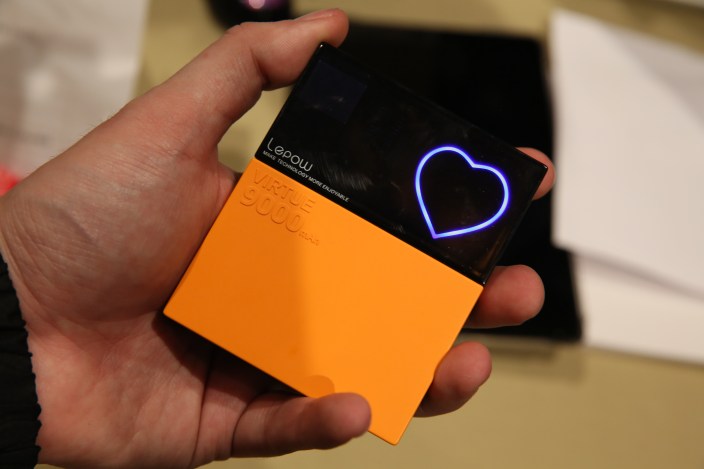 Lepow, an inventive developer with particularly cool industrial designs, showed an updated version of its $40 9000mAh battery Virtue. The new model is being described as a virtual theater for your iOS device, adding a Wi-Fi hub and 32GB of storage that can be used to store and stream videos throughout a home – or any space without Wi-Fi of its own. It’s unclear what the price and actual release date will be for the new version. 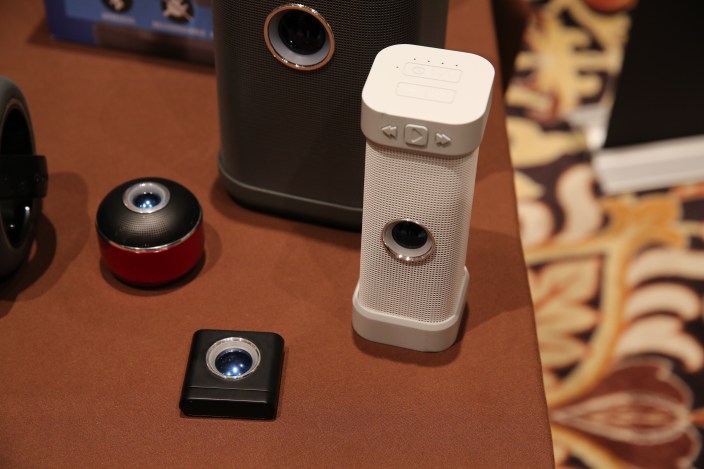 Brookstone showed the latest versions of its Big Blue speakers: the Big Blue Splash ($160, shown in white) is a waterproof speaker with styling reminiscent of its Big Blue Party, only much smaller, while Baby Blue ($70, shown in red) is a single-driver speaker in the smallest enclosure yet released for the family. Intriguingly, Big Blue Button ($70, shown in black) is a Bluetooth distribution device that splits one Bluetooth signal into separate left and right channels, then pairs with your choice of multiple Bluetooth speakers to rebroadcast the sound in wide stereo. 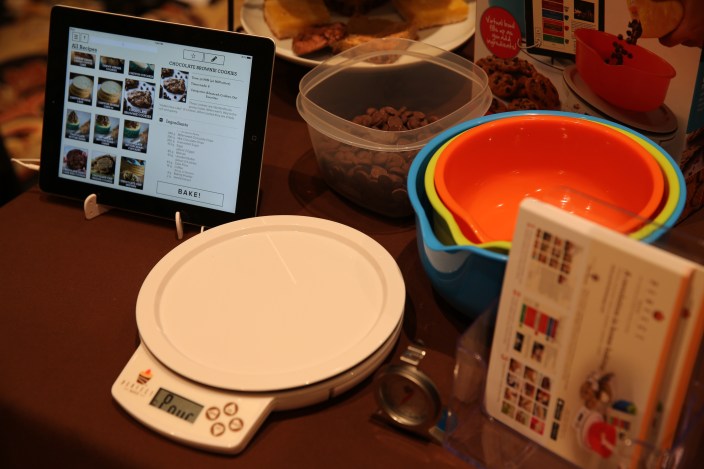 Brookstone also showed Perfect Bake ($70), a baking-focused version of its Perfect Drink kitchen scale, this time packaged with bowls and capable of weighing foods down to a tenth of a gram. It enables you to follow recipes using a connected app, merely adding individual ingredients until the app signals that you’ve hit the right weights. The trick is aided by app recipe updates, which Brookstone was demonstrating with cookies baked the night before. Perfect Bake is available now.