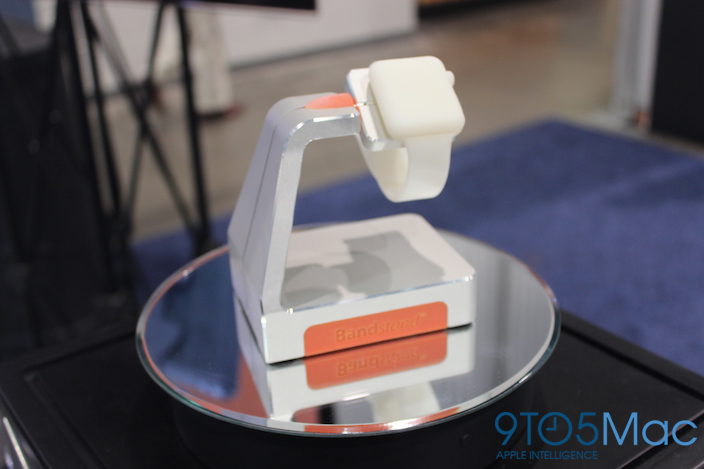 While the Apple Watch is still a few months away from release, a handful of accessory makers at the annual Consumer Electronics Show in Las Vegas have introduced new accessories for the upcoming smartwatch. Standzout is one of the frontrunners in the space with its new Bandstand charging dock for the Apple Watch. Read ahead for my first impressions of the prototype shown off at CES 2015 this week.

Bandstand features a pivoting platform that holds the Apple Watch and can be easily adjusted for an optimal viewing experience from any angle. A built-in LED light with adjustable brightness makes it easy to locate the dock in the dark. The accessory delivers multipurpose functionality with an integrated charger that will utilize Apple’s inductive charging for the Apple Watch alongside traditional USB ports for charging up to two additional devices like iPhones or iPads.

I found the Bandstand to be noticeably heavy, although Standzout claims that it was intentionally designed this way so that you don’t yank the entire dock off the table when you go to grab your Apple Watch. The dock closely matches the anodized aluminum look of the Mac and other Apple products, although its current design is somewhat of an eyesore and would stand out rather obviously on a desktop or bedside table. Over the next few years, however, the Bandstand could grow and improve alongside the Apple Watch.

Standzout aims to have the Bandstand available shortly after the launch of the Apple Watch, which is expected to be announced by the end of March. The company did not provide any further pricing or availability information, although future Apple Watch owners that are interested in this accessory can add their name to the company’s mailing list to receive more information when it becomes available. Over the coming weeks, we should see further Apple Watch accessories reach the market.

Our live coverage of CES 2015 from Las Vegas Nevada