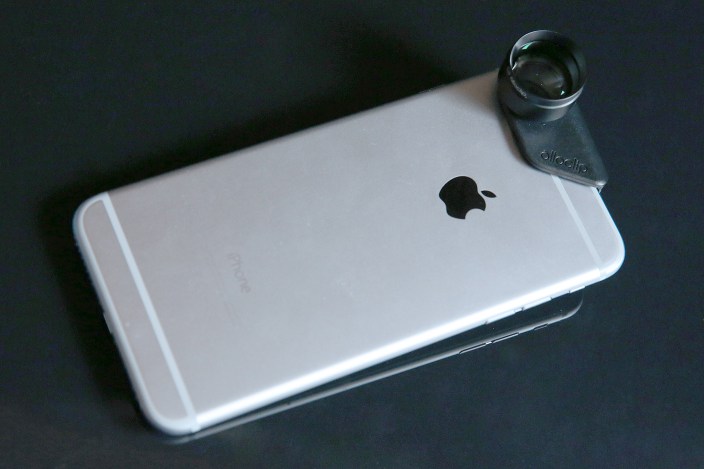 Professional photographers rarely used iPhone cameras five years ago, but images produced by the iPhone 6 and iPhone 6 Plus are – under the right circumstances – indistinguishable from dedicated point-and-shoots. The one thing iPhones always lack is adjustable lenses, so Olloclip has been remedying that omission with accessories including the 4-in-1 Lens kits for iPhone 6/6 Plus (review) and iPhone 5/5s. At the 2015 CES, it debuted a second option for the iPhone 6/6 Plus called the Telephoto and Circular Polarizing Lens ($100), which is based upon but also different from the previously impressive version for the iPhone 5/5s.

Just like the 4-in-1 Lens, the Telephoto version offers big steps forward in functionality over the prior 5/5s model. It now features support for the iPhones’ front and rear cameras, uses a new clip-based housing, and includes a separate storage compartment for the polarizer. Read on for our full impressions. 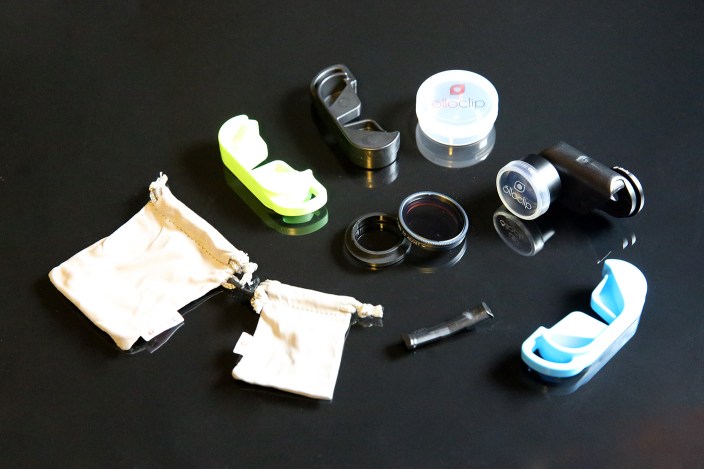 What Olloclip has done with the Telephoto and Circular Polarizing Lens set is to graft two different lenses onto the new plastic clip it previously introduced in the 4-in-1 Lens for iPhone 6 and 6 Plus. The clip measures round 2.25″ wide by 1″ tall by 1.75″ thick, unevenly due to the left and right positions of the lenses on its front and back. Beyond the clip, Olloclip includes black, green, or blue holders, as well as hard plastic inserts that resize the clip for the iPhone 6 or 6 Plus. Pull both of the inserts out and the lenses will work with Olloclip’s forthcoming iPhone 6 and 6 Plus cases, which are major improvements on its earlier designs for the iPhone 5. 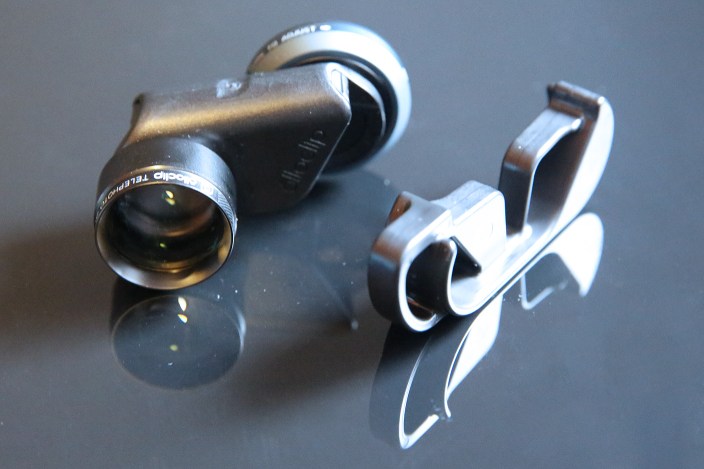 The major difference between the Telephoto Lens set and its 4-in-1 predecessor is the specific functionality of the lenses provided. One side has a non-detachable telephoto lens attached, equivalent to a 2X zoom — around 58mm equivalent versus the 29mm rear lens of the iPhone 6 and 6 Plus. It’s fixed at this zoom level, rather than adjustable, and notably increases the minimum focusing distance of the iPhones by a little.

You can see in the comparison photos above what a photograph looks like when shot using the Telephoto Lens (left), and without it (right). Unlike iOS’s “Digital Zoom” feature, Olloclip actually increases the amount of detail captured by the iPhone 6/6 Plus rather than just magnifying existing pixels. It’s not perfect magnification — some softness and a little chromatic aberration are obvious at the edges of the lens — but the sharper center is comparatively unobjectionable. The 2X lens notably includes its own cap, which can easily be removed when you want to take photos. 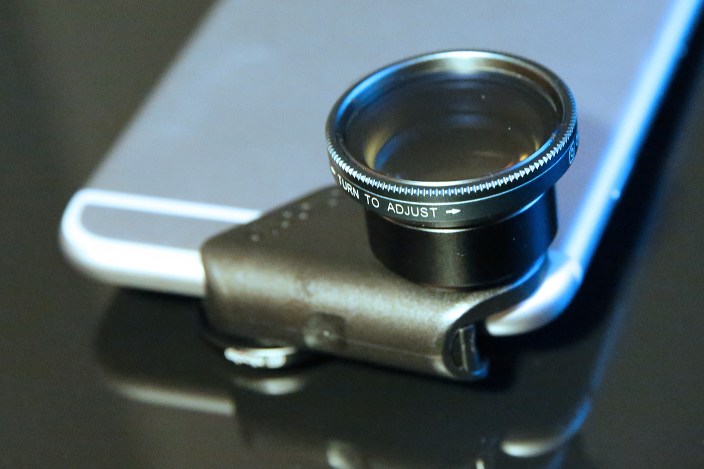 On the other side of the accessory is a completely detachable circular polarizing filter, which can be used by itself or attached to the telephoto lens for twice the impact. The purpose of a circular polarizer is to change the way the camera captures reflected light — to mute or enhance light under specific circumstances. It’s so large and flat that there’s no potential for distortion or softness when it’s atop your iPhone’s camera.

Turning a dial on the edge of the filter lets you reduce reflections on glass, in some cases making the glass appear to be invisible; it can also enhance blue skies or water when used properly. As our sample photos here show, the windshield glass on this car goes from highly reflective (right) to practically impossible to see (left) with a simple turn of the dial. Rather than including a lens cap, Olloclip bundles it with a plastic case of its own, letting you completely remove the filter when it’s not needed and store it elsewhere. Also included is a resizer that lets the polarizer work with the 4-in-1 Lenses. 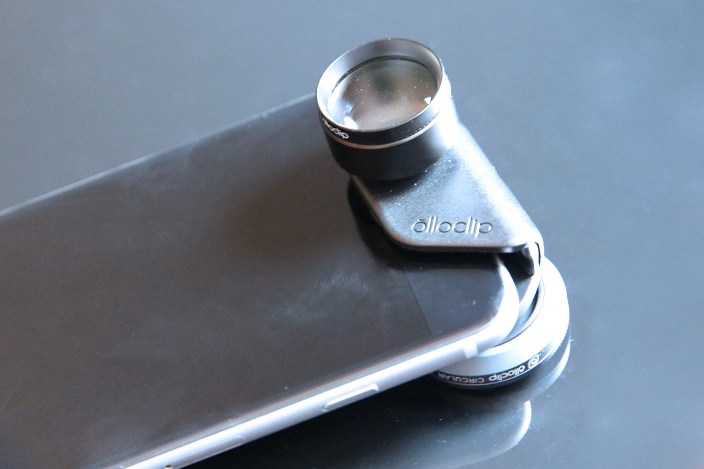 Overall, the Telephoto + Circular Polarizing Lens set for iPhone 6/6 Plus is a good – not perfect – addition to a photographer’s accessory collection. While we’d really like to see zero distortion at the edges of the 2X lens, the circular polarizer works as expected, and the convenient additional front and rear camera support is welcome. 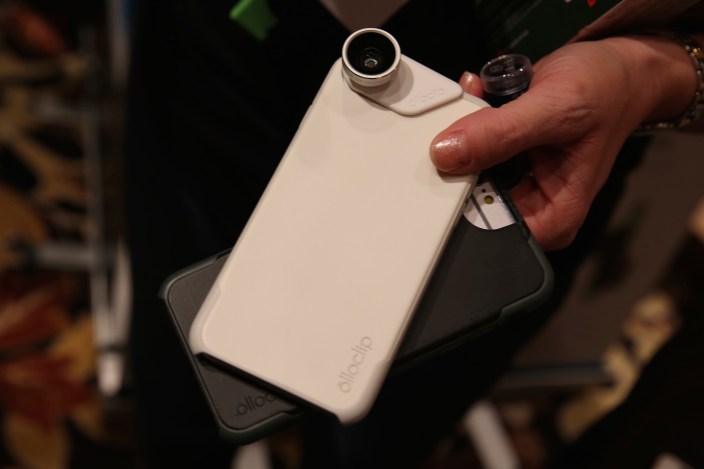 The killer hidden feature is its compatibility with Olloclip’s upcoming cases (shown above), which are good enough to use on a daily basis, increasing the likelihood that you’ll want to bring these accessories with you. We’re anxious to see the cases – and this new lens set – hit the market.