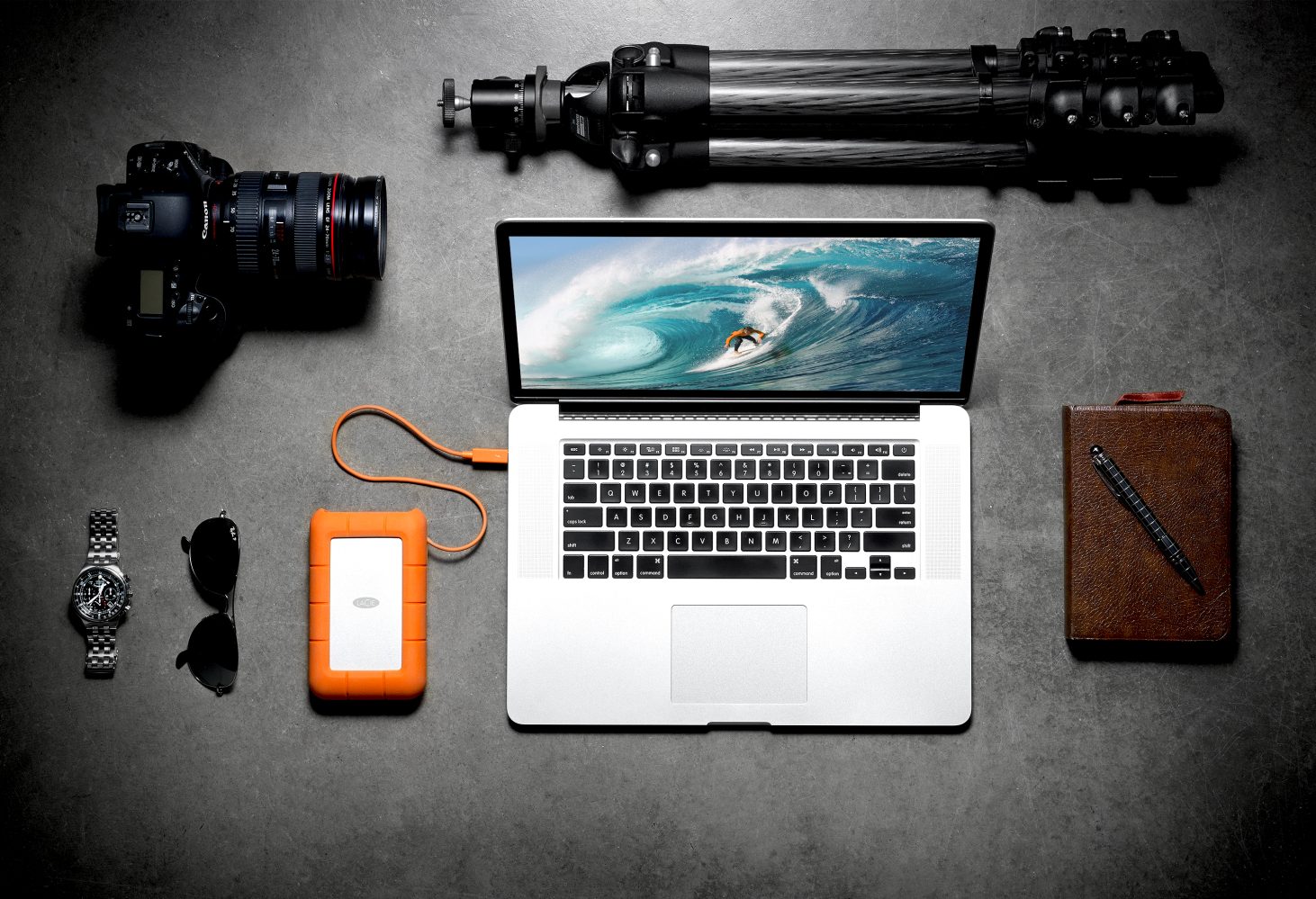 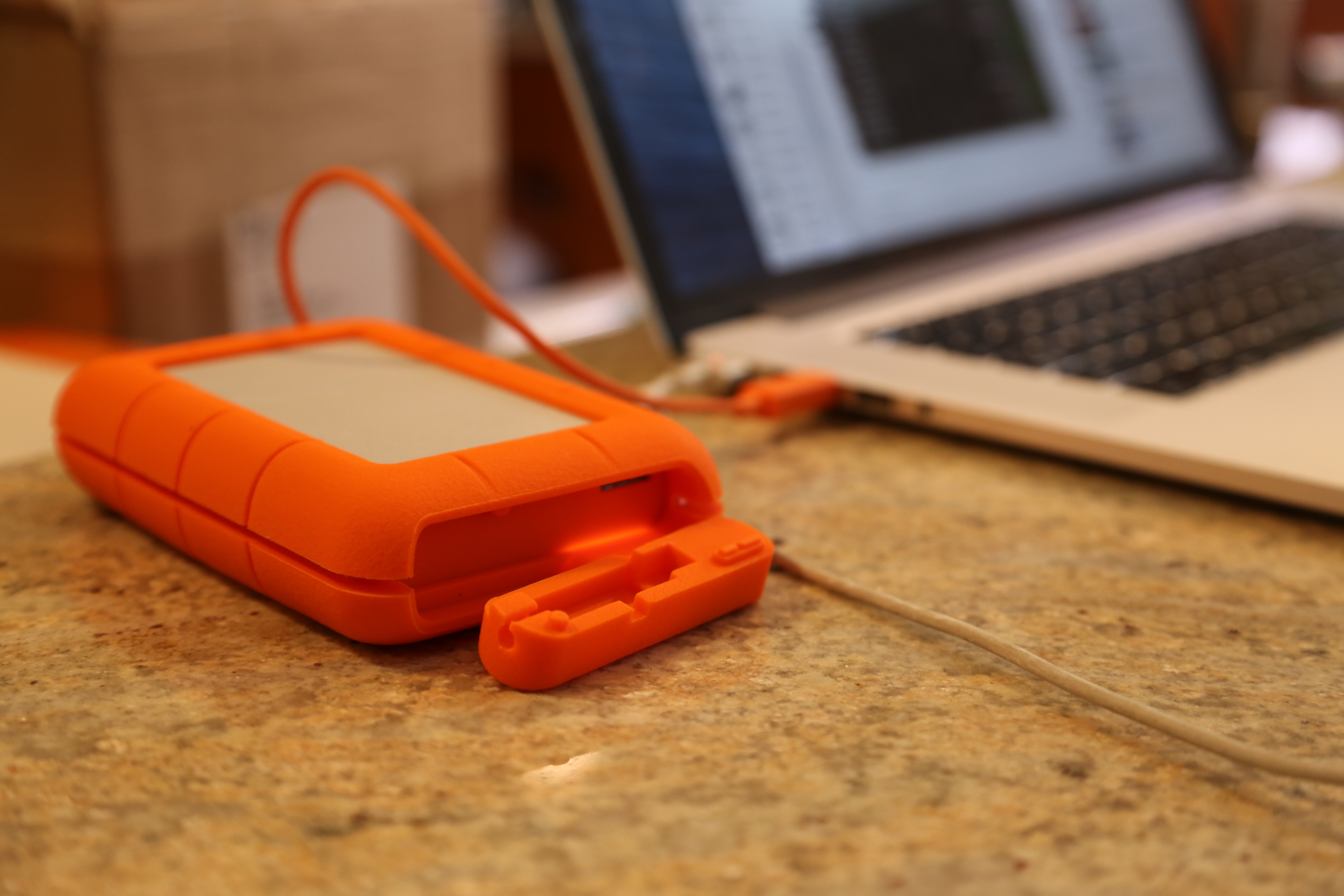 LaCie announced its new 4TB Thunderbolt/USB 3 Rugged RAID portable hard drive ($420 list, $399 Amazon) today, and I’ve had some time to take it for a little ‘spin.’ There are two speedy 7200RPM 2TB portable hard drives RAID-ed together inside to give the device very impressive, almost SSD-like speeds but with the cost savings and huge storage of portable hard drives. At the same time, the package isn’t much bigger than a regular portable hard drive and better yet, it can take a serious beating…

The first thing you’ll notice is that the Rugged feels very similar to the rest of the venerable LaCie Rugged lineup, though it is slightly thicker and denser than previous single drive models – as you’d expect.

LaCie has incorporated a built-in Thunderbolt cable which wraps around the edges of the unit and ends up being a foot in length whenfully extracted (see image below). The cable is the thinnest I’ve seen in power-carrying Thunderbolt and the power from a MacBook is enough to power the drives. 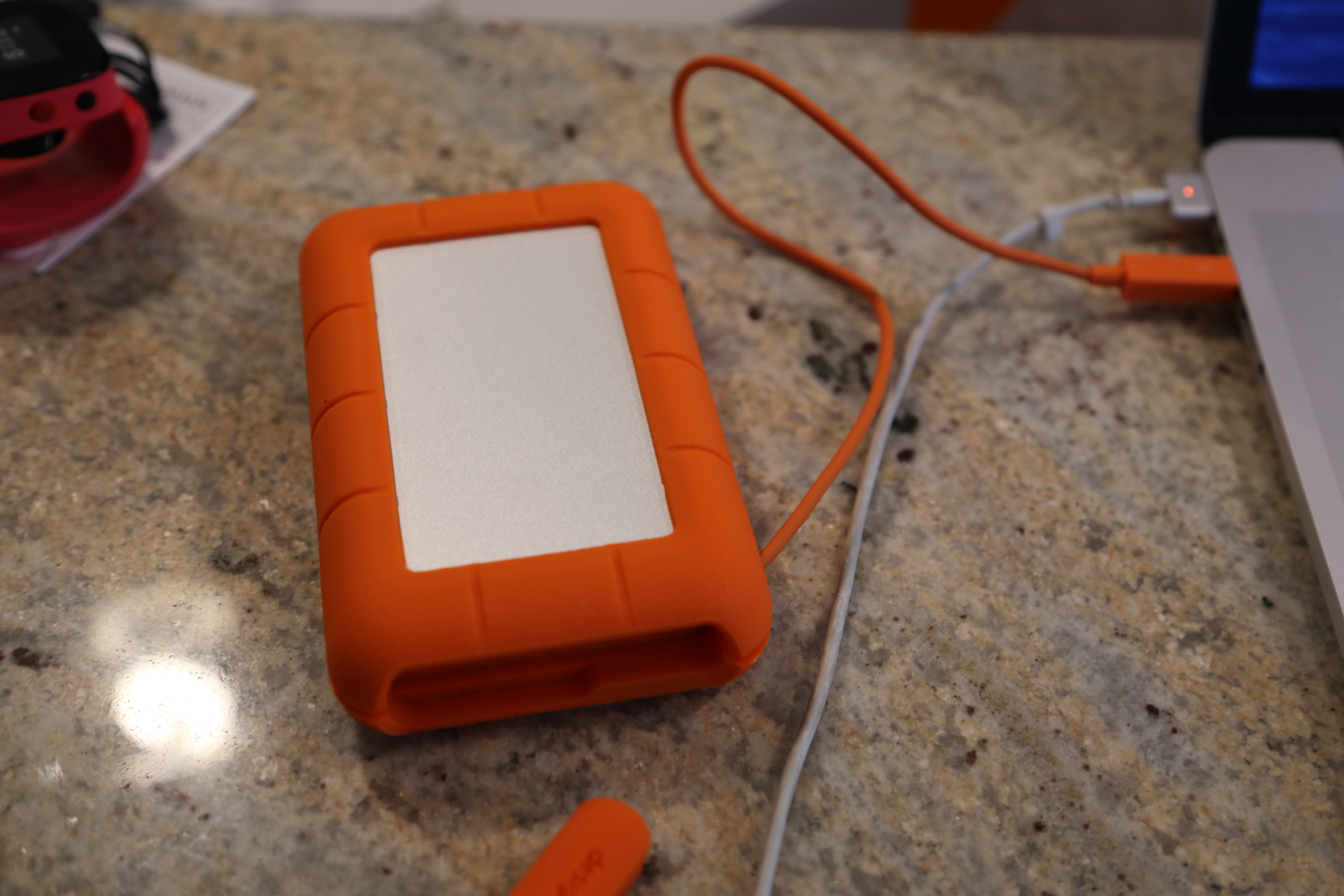 The unit also has a USB 3 port and cable that somewhat awkwardly connects to machines that don’t have a Thunderbolt port (like Apple’s latest 12-inch MacBook and most PCs). 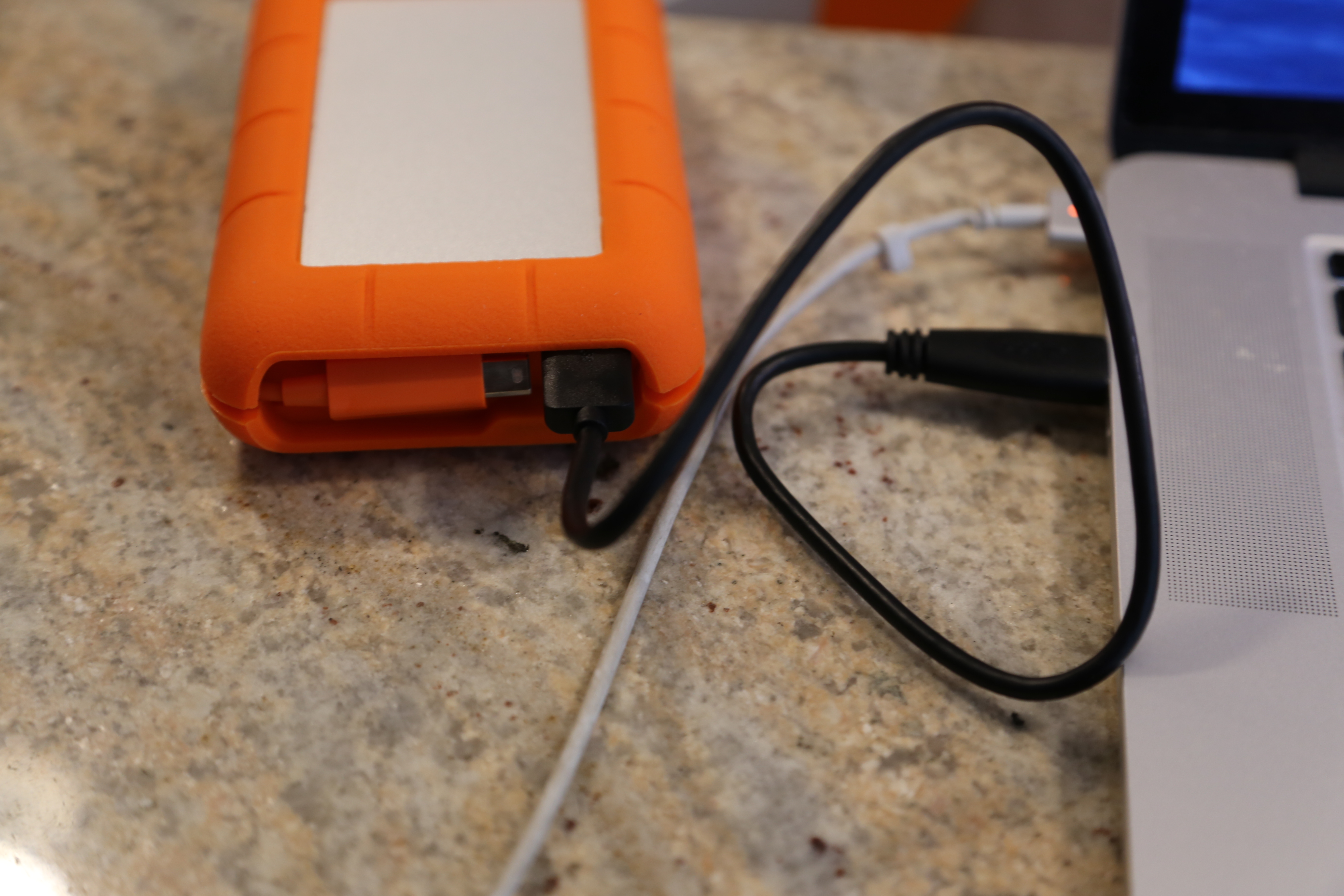 My 2014 15-inch MacBook Pro’s USB port didn’t supply enough power to spin up the drives; I had to use the included AC adapter which plugs in where the Thunderbolt cable rests. Awkward. See for yourself below: 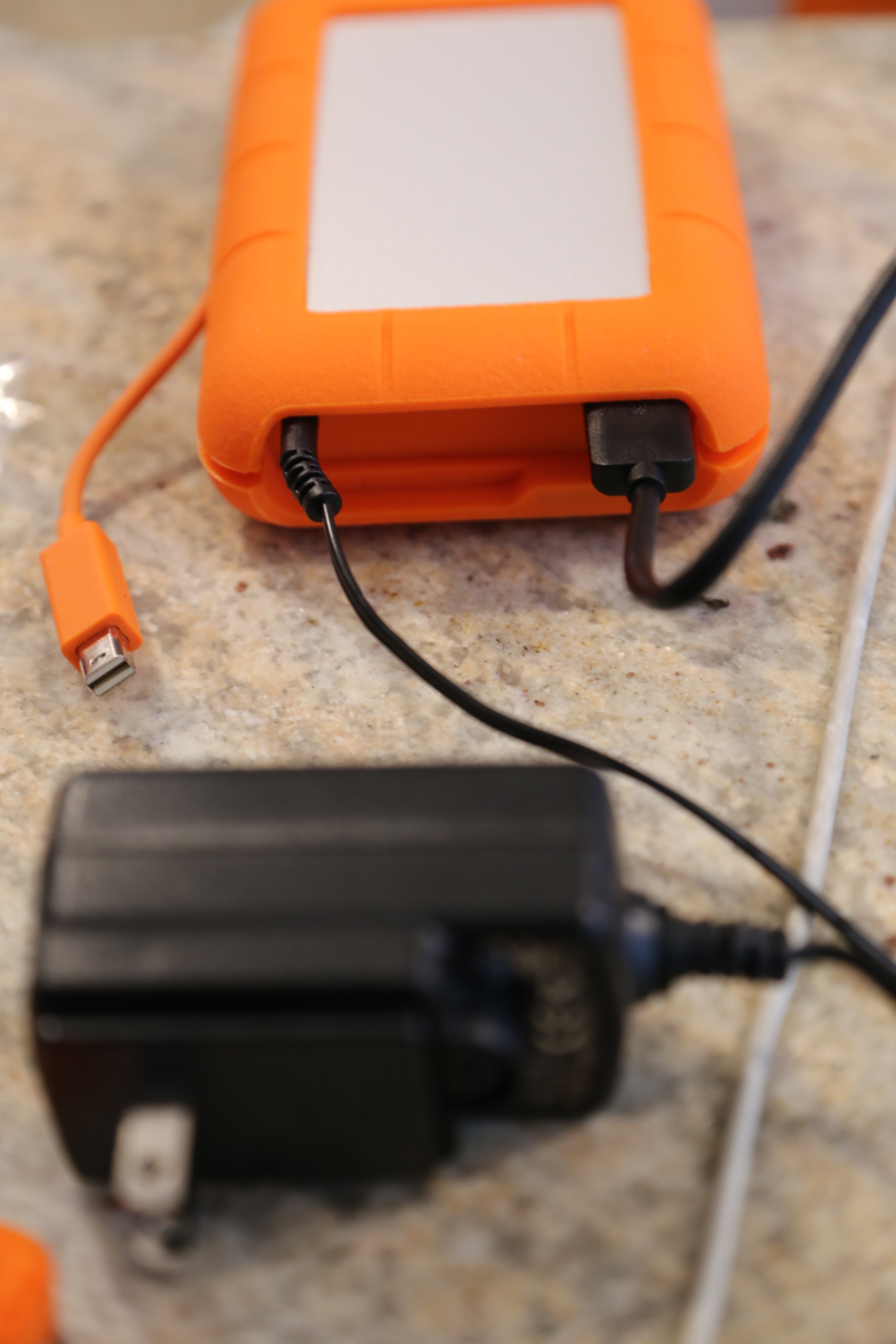 The 4TB Rugged was easy to set up with LaCie Manager as an executable. Putting the RAID together was quick and easy. LaCie also installs Intego Backup Manager for you if that’s what you are into. I uninstalled immediately because I’m a Time Machine guy.

Partition-wise, the defaults make a PC-compatible 800GB partition and a 3.2TB Mac HFS partition. That use case made some sense so I went with it for the speed tests. I used the industry standard BlackMagic disk speed test which is used to check SSDs and hard drives for video editing on Macs.

I easily saw 250MB/sec speeds when using the built-in Thunderbolt connector. That’s about half of the speed of high end, internal SATA SSDs, but still plenty fast for most regular video editing. If you use USB 3 or RAID 1 redundant mirroring, expect to see speeds in the 130-140MB/sec range. 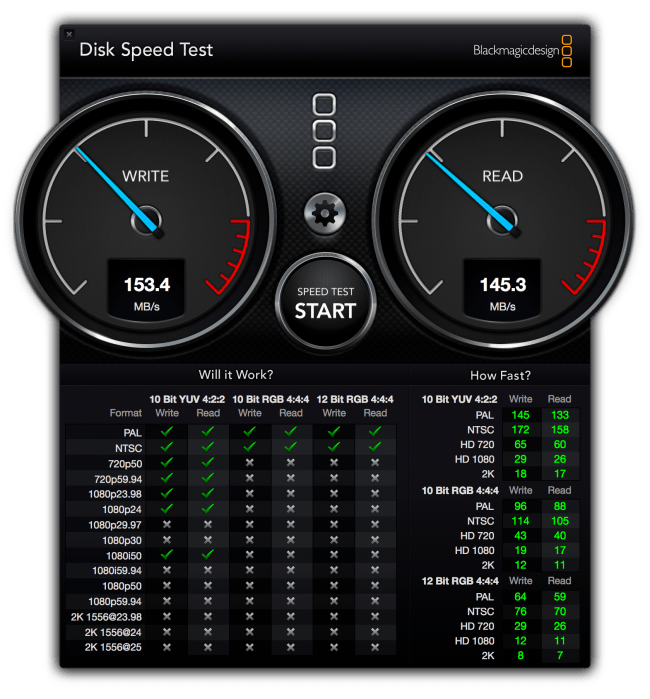 For the heck of it, I dropped the drive a few times from counter height to see if the RAID configuration was any more vulnerable than a simple hard drive setup. After about five drops from counter height, the drives continued to work fine without a glitch. I wouldn’t recommend doing this on purpose with a RAID drive with important data on it, but it is good to know that you’ve got a good chance of data survival.

I’ve long loved LaCie’s rugged drives because they are made to be taken on the road along with all of the bumps and bruising that comes along with it. With the 4TB RAID version, LaCie adds incredible size and speed that video/imaging professionals and people with big backups/lots of storage needs will love. The price at $400 is significant but not at all insane when you consider the SSD-class speeds combined with the big 4TB size.

LaCie Doubles Capacity of Rugged Thunderbolt SSD CUPERTINO, CALIF. – LaCie, the premium brand from Seagate Technology plc (NASDAQ: STX), announced today that its iconic Rugged Thunderbolt™ storage solution will be available in a 1 TB SSD capacity. With double the storage, the new LaCie® Rugged is just as portable with no size or weight increase compared to the 500 GB offering. Plus, it still features the lightning–fast transfer rates of Thunderbolt and is tough in the field with shock, dust and water resistance.

“My expeditions take me all over the globe so I need equipment that’s up for any terrain,” said photographer and National Geographic Expeditions expert Kike Calvo. “The LaCie Rugged is my go–to hard drive because its fast speeds help back up my work quickly, and its toughness has yet to let me down. With the addition of drones into my workflow, I’m creating more content than ever before. So larger capacity in the same reliable enclosure means I can take fewer drives and save valuable luggage space.”

The LaCie Rugged delivers speeds of up to 387 MB/s* — three times faster than a standard mobile hard drive**. With these speeds, creative professionals can transfer 100 GB in less than five minutes. The LaCie Rugged even provides enough bandwidth to review and edit photos or video in the field. With a laptop and a LaCie Rugged, a photographer or videographer has everything they need to back up footage or complete a project on location. This time savings and convenience is key for field–based professionals.

“Wherever digital content is created and wherever our customers want to travel to capture and collect it, our LaCie Rugged Thunderbolt drive will go as the ideal companion,” said Erwan Girard, Business Unit Manager for LaCie. “With fast Thunderbolt speeds that save hours in the field and now a 1 TB SSD capacity, our customers can focus on the creative process instead of worrying about transfer times or storage limits.”

The LaCie Rugged is MIL–compliant, which means that data is protected even during accidental drops of up to 2 meters (6.6 feet). With its cap in place, the LaCie Rugged is also IP 54–rated for superior protection against dust and water splashing — even during operation. Plus, it is resistant to vibration and shock and is tough enough to be shipped for reliable delivery to clients or partners.

The LaCie Rugged includes everything professionals need for secure backup in the field: a backup software suite and compatibility with Time Machine® and Windows® Backup. It also includes LaCie Private–Public software, which lets users password–protect the entire drive or only certain volumes with AES 256–bit encryption.

AVAILABILITY The new 1 TB SSD version of the LaCie Rugged, design by Neil Poulton, will be available this month for $949.99 (MSRP) through the LaCie Online Store and LaCie Resellers.