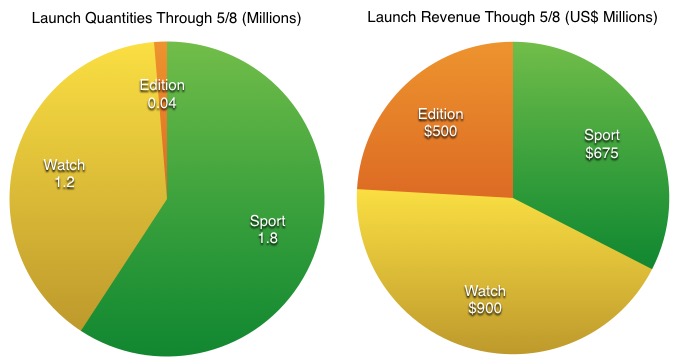 A leading technology analyst has estimated that Apple Watch sales in the first two weeks are likely to hit 3M, comprising 1.8M Sport models, 1.2M steel and 40,000 Editions – generating more than $2B revenue. Think Big Analytics principal Carl Howe also estimates that gross margins on the wearable are likely to exceed 60%, making the Apple Watch the company’s most profitable ever product.

[The electronics] in the expensive models are the same ones used in the Sport models, and they just don’t cost that much. And while adding Gold cases and designer bands add cost to the bill of materials, the costs are small compared to the price premiums paid for these products. Unlike in the consumer electronics business, I see no pressure for prices to fall and if anything manufacturing costs will, resulting in a very profitable business.

Howe readily admits that his analysis, like any other from outside the company, are “really just educated guesses,” but he’s a credible name and his reasoning makes sense …

Howe bases his sales estimates on a mix of three sources: Slice sales data (which is limited to the USA, so will substantially understate global sales), polling on model orders and Quanta production estimates. Combining the three, Howe believes it is clear that initial sales will be constrained by supply rather than demand.

I believe that the 3 million Watches already in flight to consumers are simply Apple’s seeding of the market prior to adjusting the final assembly mix to the actual order flow. I also believe that Apple and Quanta have probably gained enough experience at this point to begin ramping up production to more than 2 million units a month during May and June, resulting in another 4 million or so units to be shipped prior to the end of the second calendar quarter. I don’t believe that this increased production will satisfy demand however, and I expect Apple Watches to be on  back order through much of the summer.

While different analysts come up with different sales estimates, it’s hard to see how Howe could be wrong on the likely margins. As he notes, Apple has always made high-margin products, but the premiums charged on the steel and gold models, together with the majority of the bands, are a whole new ballgame.

While Apple uses premium materials for the Apple Watch, I believe that the costs of those materials are small compared with the price of even the least expensive Apple Sport Watch. By designing cases and bands that command prices aligned with jewelry instead of electronics, Apple has positioned its smartwatch products to earn exceptionally high margins compared to its smartphone and computer lines of business.

If his numbers are correct, then the Edition will be responsible for a tiny slice of sales but almost a quarter of total revenue – and be halfway toward a billion dollar business in its own right.

His suggestion that the next-generation Apple Watch will be a minor one – “simply a software update […] with additional bands and possibly another case color” – strikes me as less likely. I’d expect another sensor or two at least. But his numbers make a lot of sense.

While most of us are still waiting to take delivery of our Apple Watches, third-party companies are already out in force with replacement bands and battery-packs. Apple may not be done with its own band choices, Jony Ive revealing a range of new Sport band colors in Milan last week. It’s not yet known whether these are special editions or will go on general sale.