Review: Griffin’s WatchStand is a tall, cheap way to dual-dock your Apple Watch and iPhone 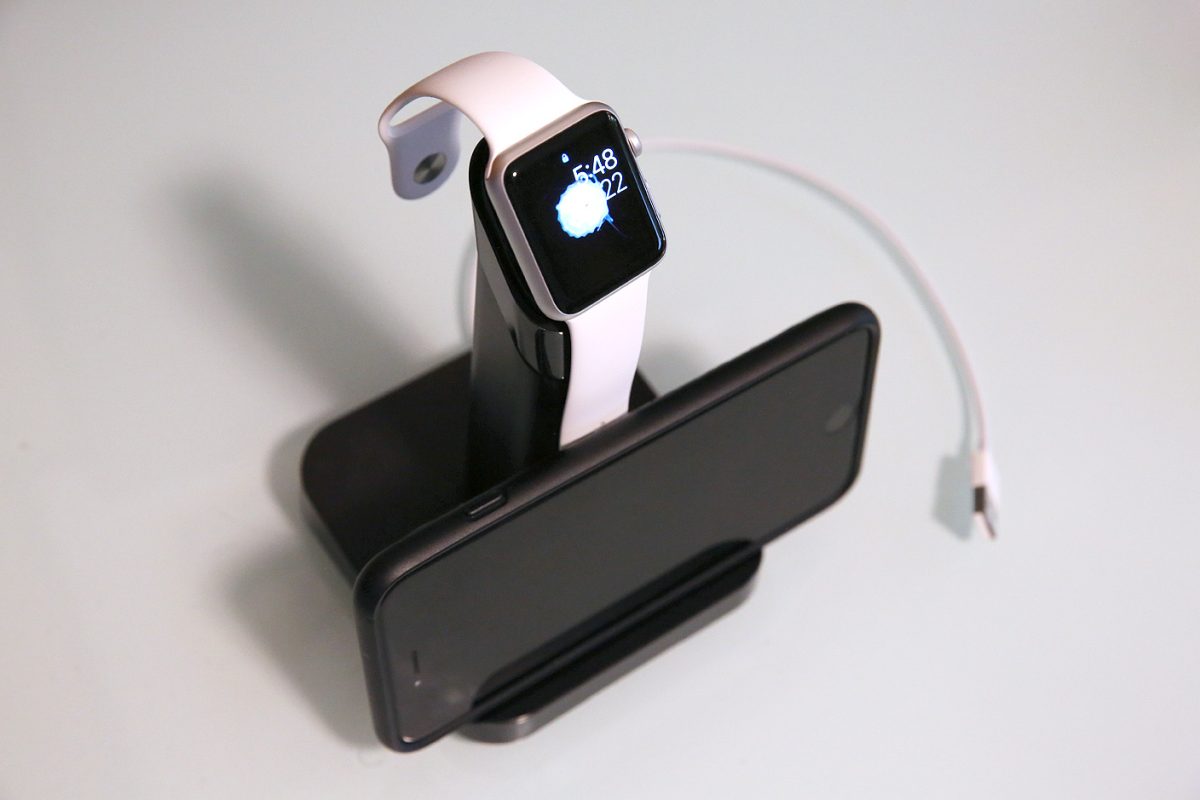 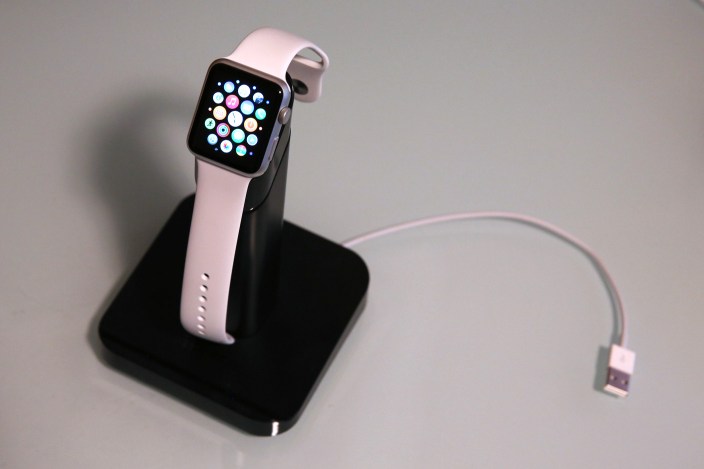 I respect any accessory developer who attempts to solve a legitimate problem, and admire developers who find smart ways to solve multiple problems simultaneously. Unlike many competing Apple Watch stands, Griffin Technology’s new WatchStand ($30 via Amazon) thinks past the initial challenge of mounting your watch, and also includes a place for your iPhone to rest on your nightstand. As you’ll see in my guide to the best Apple Watch stands and docks, it’s hard to find a decent-looking combination Watch and iPhone stand at a lower price.

As that low price suggests, however, WatchStand makes compromises in both materials and functionality. Built primarily from plastic with a rubber core, it’s certain not to scratch a stainless steel or gold Apple Watch. But would you actually want to use it with one of Apple’s more expensive timepieces? That’s another question… 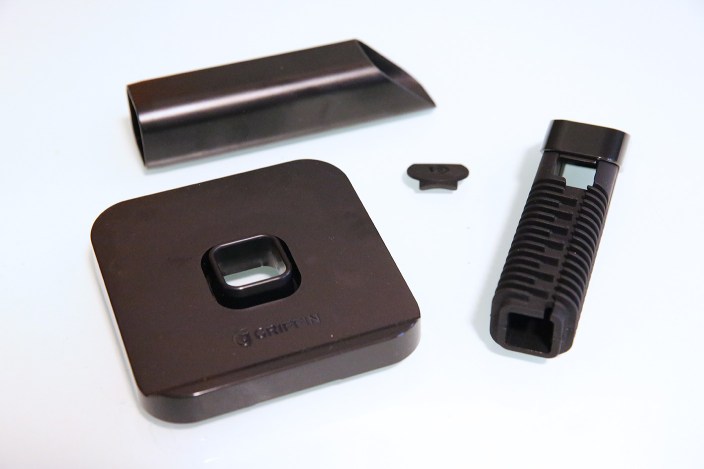 WatchStand arrives as a set of five mostly plastic parts: a heavily weighted black glossy plastic base that looks like a flattened Apple TV with a hole in the center, a matching glossy pipe, a rubber cable-managing core for the pipe, a glossy cap for the core, and an optional semi-circular rubber insert. As with all Apple Watch stands released to date, you need to self-supply one of Apple’s official Apple Watch Magnetic Charging Cables yourself. WatchStand thoughtfully accommodates either 1-meter or 2-meter cable lengths, as well as the all-plastic Sport and partially metal regular Magnetic Charging pucks. 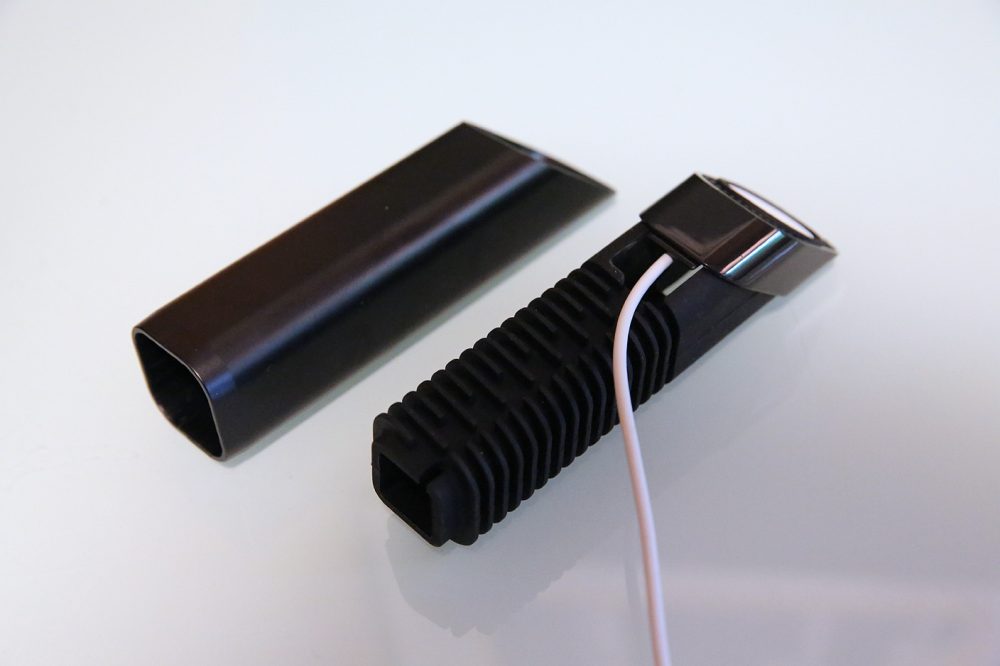 Start by pulling the USB plug through the top 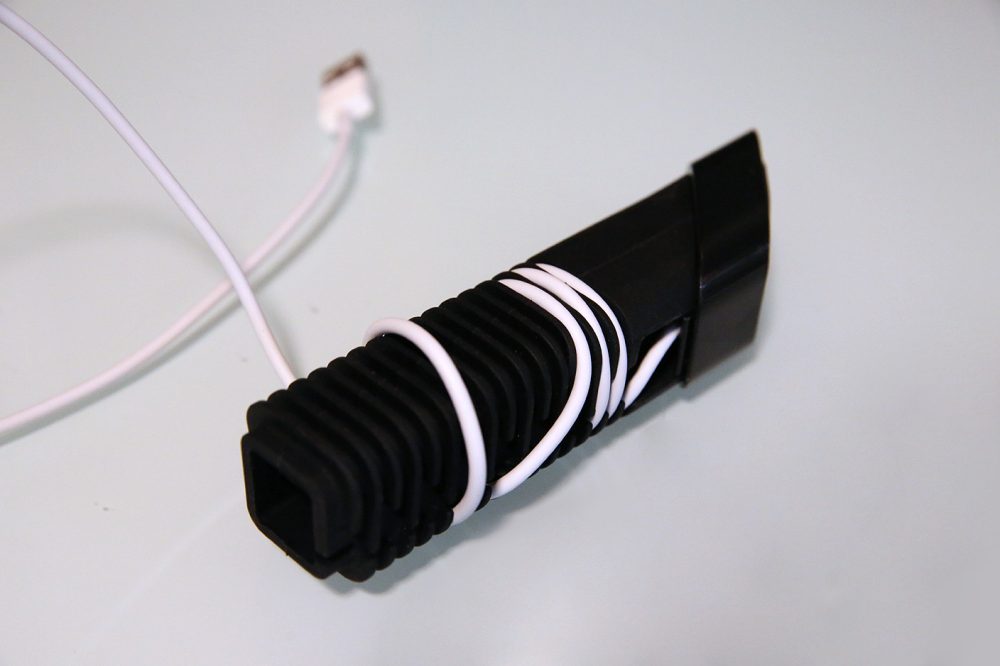 Not the right way to wind the cable 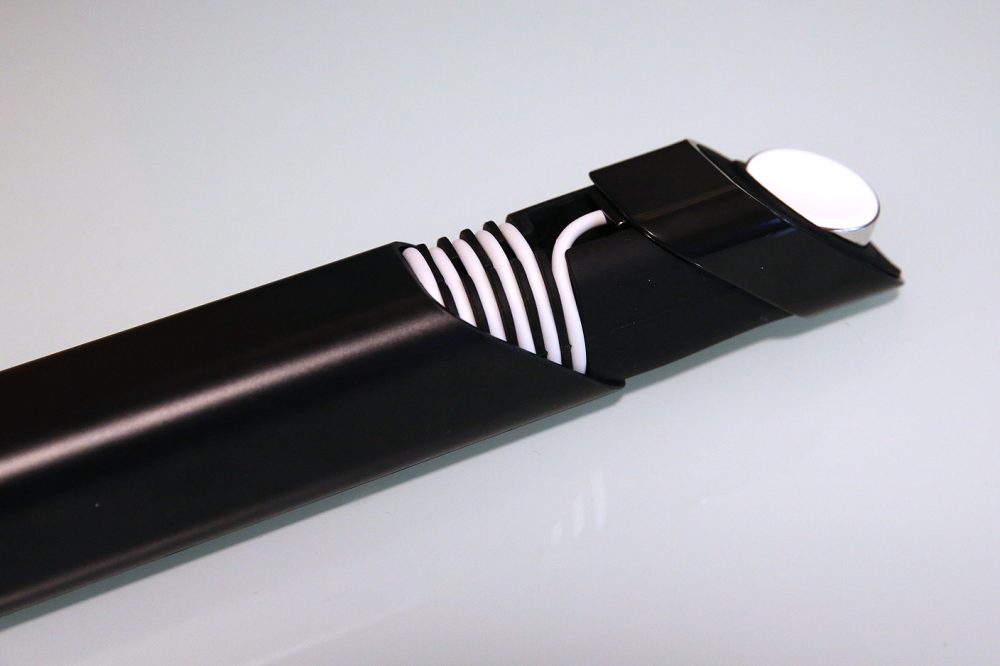 The right way to wind the cable

Installation is fairly simple: stick the Magnetic Charging Cable’s USB plug through the center of the rubber core, wind the cable around spiraling grooves on the core, leave enough cable loose to connect the plug to a self-supplied wall charger, and stick the core into the hard plastic pipe to hide the cable. The glossy plastic cap should passively snap into place inside the pipe as they come together, and the pipe then attaches to the base, without permanently locking together. If you’re using the Apple Watch Sport’s plastic charging puck, Griffin’s optional semi-circular insert won’t be necessary, but Apple’s thinner metal pucks require the insert so that they’ll stick out enough from WatchStand to make a completely secure magnetic connection with a Watch. 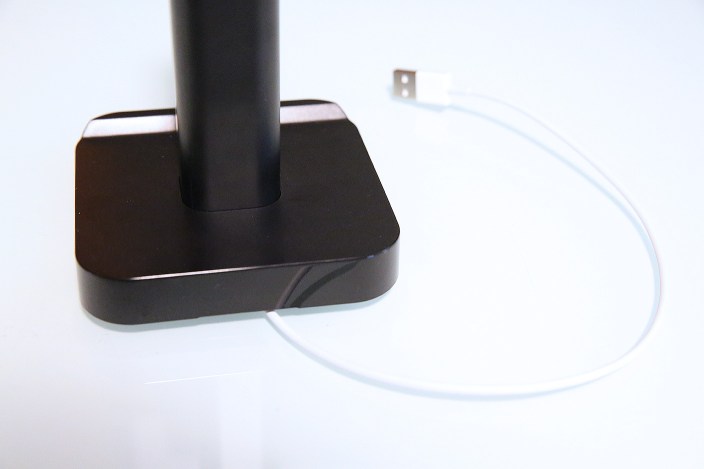 The only challenges WatchStand presented during installation were modest, namely getting the cord to stick firmly enough in the grooves not to bunch up when I installed the outer pipe, bringing the glossy plastic cap as close as possible to the pipe, and picking the right cord length for connection to a charger. For most users, these will be one-time issues, and quickly resolved. Although the glossy Watch-holding pipe won’t detach from the base during normal use with your Watch, you can easily separate them to adjust the cable or charging puck during initial setup. 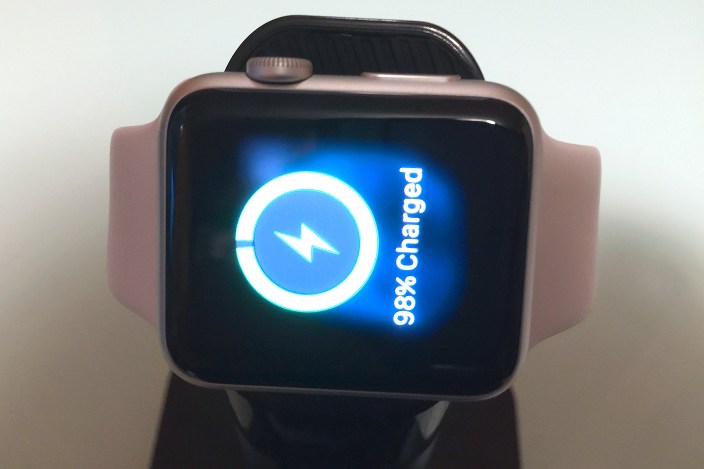 The bigger question is whether WatchStand’s design and functionality will appeal to your personal needs and sensibilities. Unlike many of WatchStand’s rivals, any Apple Watch with a closed loop-style band will need to be mounted and charged on its side, which is a bit unusual; open bands can instead dangle behind and in front of the 30-degree-angled top surface, a more natural mounting position. On the other hand, Griffin offers greater cable management and versatility than with some other stands: four large rubber feet on WatchStand’s bottom have gaps between them to let you place the USB cable in whatever direction you prefer, which can be handy when dealing with shorter 1-meter cables or substantially wound 2-meter cables. 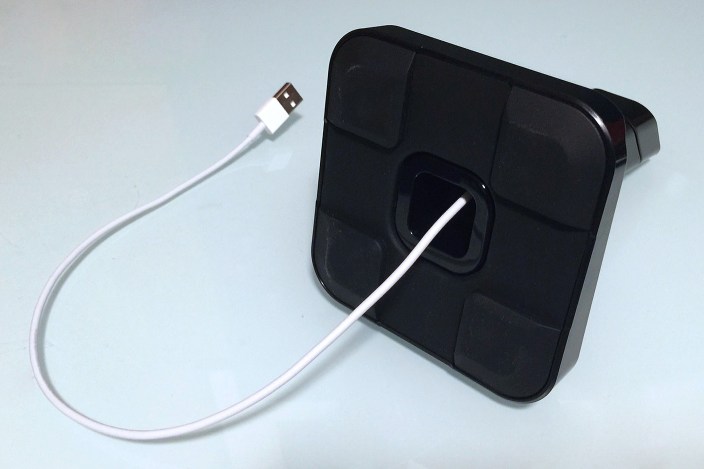 WatchStand’s height and footprint may be polarizing for some people. Several readers opined that Mophie’s Watch Dock, which I reviewed yesterday, elevated the Apple Watch too much — and that was only 3.5 inches up. By comparison, the much larger 4.2″ square by 7″ tall WatchStand lifts the Apple Watch 6 full inches above your nightstand, a height that users could either find ideal or way too tall. The height appears to have been picked to provide ample room for any iPhone to lay on its side below. I’ve personally never wanted to leave my iPhone in this position, but Griffin places a secure lip on the edge to prevent it from slipping off, and you can self-supply a Lightning cable for charging. From my perspective, a side-by-side and more integrated iPhone/Apple Watch docking and charging solution would make more sense, but for $30 or less, this is the sort of solution you can expect. 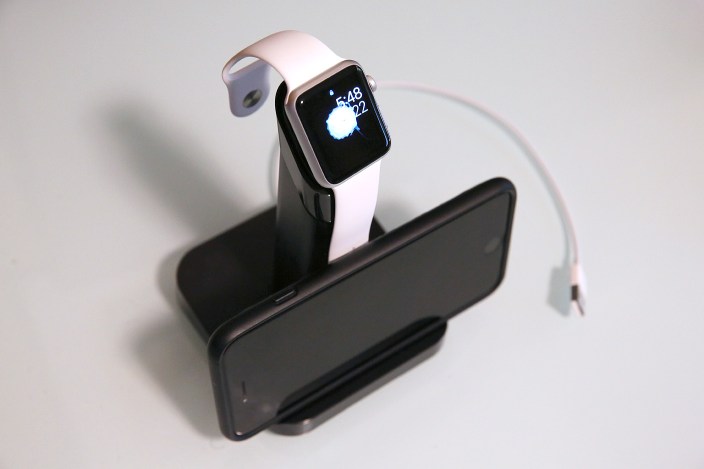 In the final analysis, the strongest feature of Griffin’s WatchStand is its aggressive pricing. It’s nearly as affordable as Spigen’s simple metal S330 stand, and a lot less expensive than most of the other combination iPhone/Apple Watch docking solutions. Because of its tall, plastic frame and passive approach to holding the iPhone, it will be a better fit for budget-conscious users than design obsessives, but it earns a little bonus credit for trying to kill two birds with one stone, and mostly succeeding.