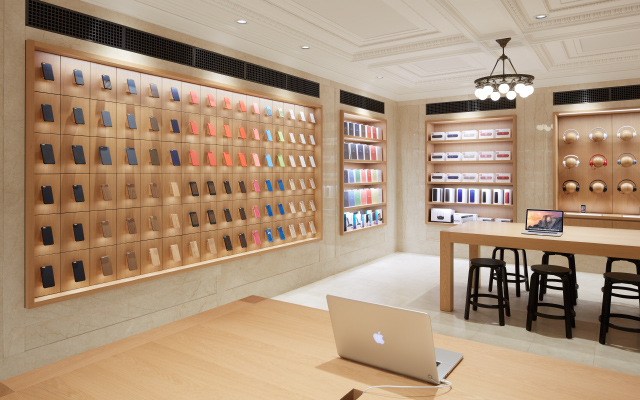 Shops will begin ramping up on delivering a more premium feel in July, in a plan to display accessory packages uniformly in white, and increase the overall feeling of uniformity among accessory displays.

All-white Apple packaging made its debut with the release of the Apple Watch in April. Though Apple has historically shifted between mostly white and mostly black packages for its own products, it has not insisted on uniform packaging for third-party accessories. Uniform, white packaging for third-party accessories, however, is something that is present at the new Upper East Side store, as pictured above. The report adds that Apple will reduce the number of products it sells in its retail stores to focus on higher-quality items.

The reported changes follow Apple SVP of Retail Angela Ahrendts announcing that Apple has plans to renovate 20 existing stores in the months to come during the recent opening of the new Upper East Side store. It also comes just as Jony Ive switches roles to focus more on retail and Apple closes its own company store in Cupertino for a redesign that could potentially act as a testing ground for future stores.