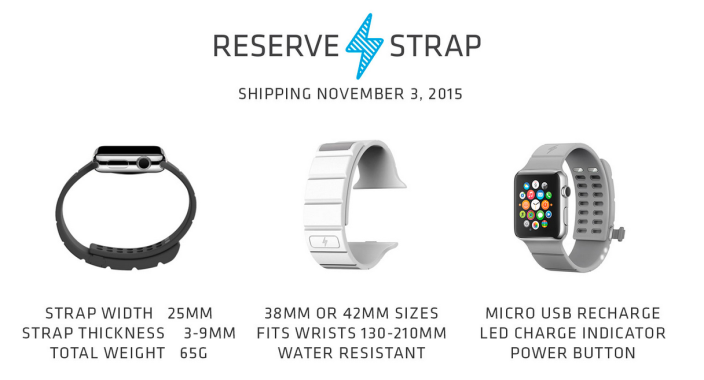 Following a number of teases for its third-party Apple Watch strap with a built-in battery pack, Reserve Strap, bound to be one of the first battery straps for Apple Watch, is promising an additional 30 hours of battery life for Apple Watch users as it announces plans to ship in November.

In an update on its website, the company announced that the final design for Reserve Strap will offer “more than 30 hours of additional usage,” or 2.7x or 167% of the Apple Watch’s built-in battery.

One of the biggest complaints regarding Apple Watch at launch was the necessity of charging once a day for most users. Reserve Strap will bump that up to once every three days or so, and even up to a week for some users that are using the device less frequently.

In addition to being one of the first battery straps for Apple Watch, the product will be one of the first to tap into the device’s not-so-secret hidden port, opposed to using Apple’s own magnetic, inductive charging solution. The company previously noted that using the port will allow for faster charging while allowing them to avoid interference with sensors on the back of the watch in their design.

The Reserve Strap will come in three colors — white, grey, and black— and will be available for both the 38mm and 42mm Apple Watches with the same specs for both in terms of additional battery life time. It will also be “as resistant to water as Apple Watch,” addressing one of the concerns several readers mentioned when we first told you about Reserve Strap. The company will send a micro USB cable for charging the strap (charging won’t require disconnecting the strap from Apple Watch), as well as a special tool for removing the door on the hidden port that Reserve Strap connects to for charging. You can preorder now for $249.