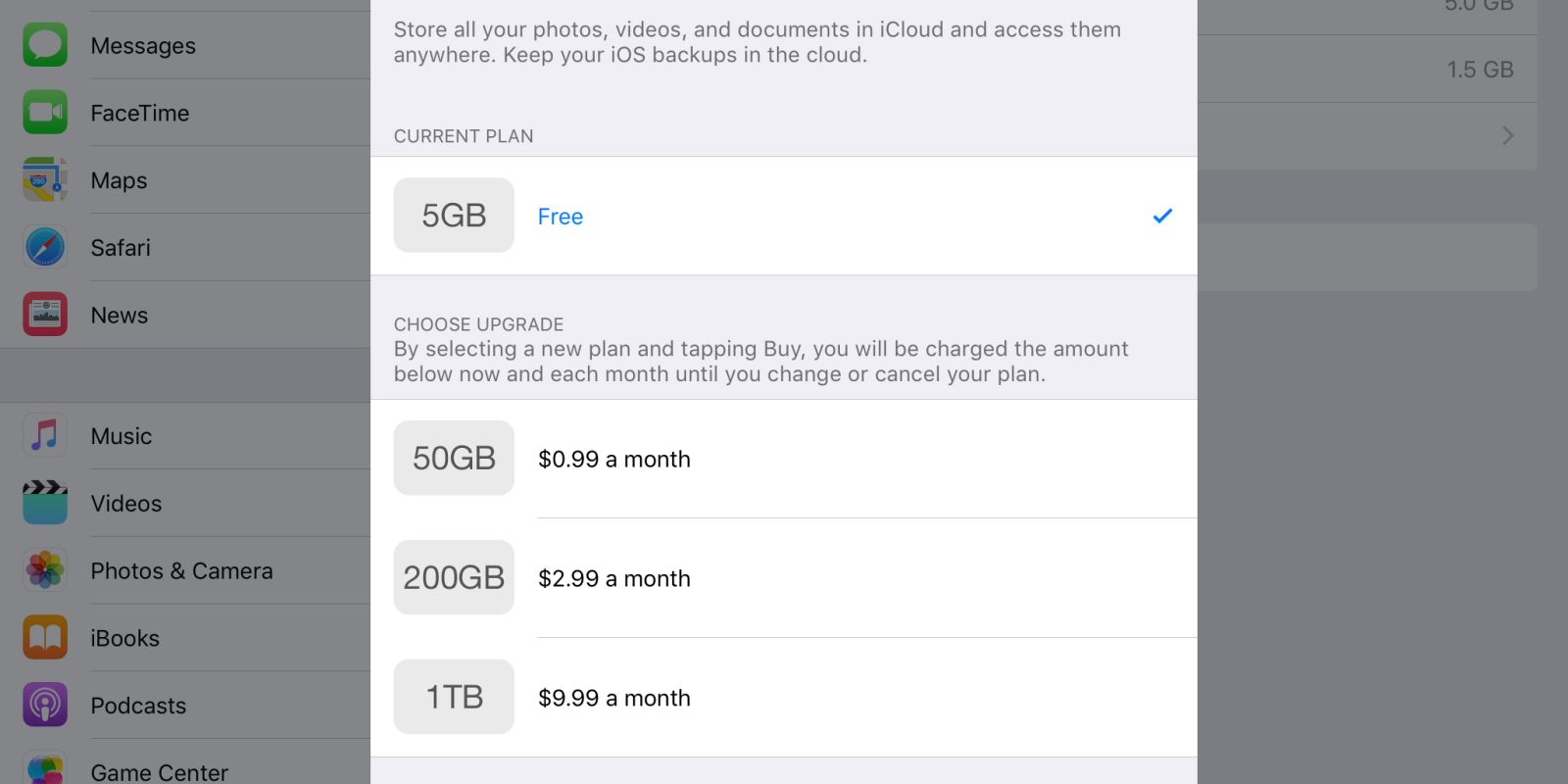 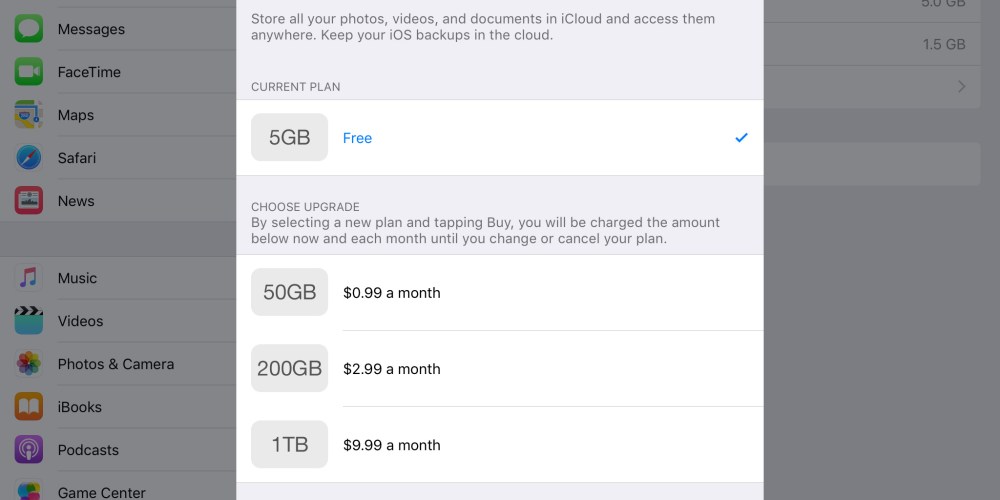 Yesterday, a reader named Lesley asked me for an update on my earlier opinion piece, “Google’s new Photos may just have won my library away from Apple.” As you may know, Apple considerably lowered its iCloud storage prices last week. Consequently, the choice between Apple’s paid and Google’s free photo syncing services has become more difficult than it was when I wrote that article.

Lesley wrote, “I read your article on Google Photos possibly stealing you away from iCloud photo sync, and I would love an update to that article – if you chose to migrate, how did it go, and how is it functioning so far?… I am teaching a class on photo management in a retirement community – I am deciding which to recommend for cross-platform syncing, and which service to recommend for lower income seniors who are Apple based.”

I would much rather not share this particular tale of woe, but the topic of digital photo storage is important to me, and as Lesley indicates, many other people. What happened with my photo library turned out to be my biggest computer-related headache of the past year. So to help spare you a similar set of experiences, I’ll tell you what happened, so you can decide whether to pick Google Photos, Apple’s iCloud Photo Library, or — as I’ve reluctantly decided — neither…

As mentioned in my prior article, I have a very large photo library, currently exceeding 1.4TB without including business photos or home videos. Up until last week, the idea of uploading that library to iCloud was unthinkably expensive. Apple’s cost for even 1TB was $240 per year, and I wouldn’t consider paying that much to store all of my library, let alone part of it. At a far more attractive price of “free” for basically unlimited storage, Google Photos was extremely appealing.

[This is the part where I politely ask Google and Apple partisans to refrain from using the comments section below for yet another fight over the companies’ respective privacy policies and business models. Neither one wins here.]

Lesley’s email asked a few pertinent questions about Google Photos. “I have read that there are several problems with it, such as duplicate, space hogging libraries and other strange issues. Did you run into any of these? If you did not migrate, why not?”

To make a long story short: Yes, I tried Google Photos. No, I’m not still using it. The uploading process from a Mac wasn’t great — slow and somewhat confusing — and after getting a test batch of images online, I decided that I didn’t want to continue the process with the rest of my library. Although Google’s cross-device apps worked pretty much as expected once photos were on Google’s servers, I wouldn’t consider going through the uploading experience again without improved Mac software. Having said that, the issues I experienced were acceptable for a free service, and for users with much smaller photo libraries, surmountable. 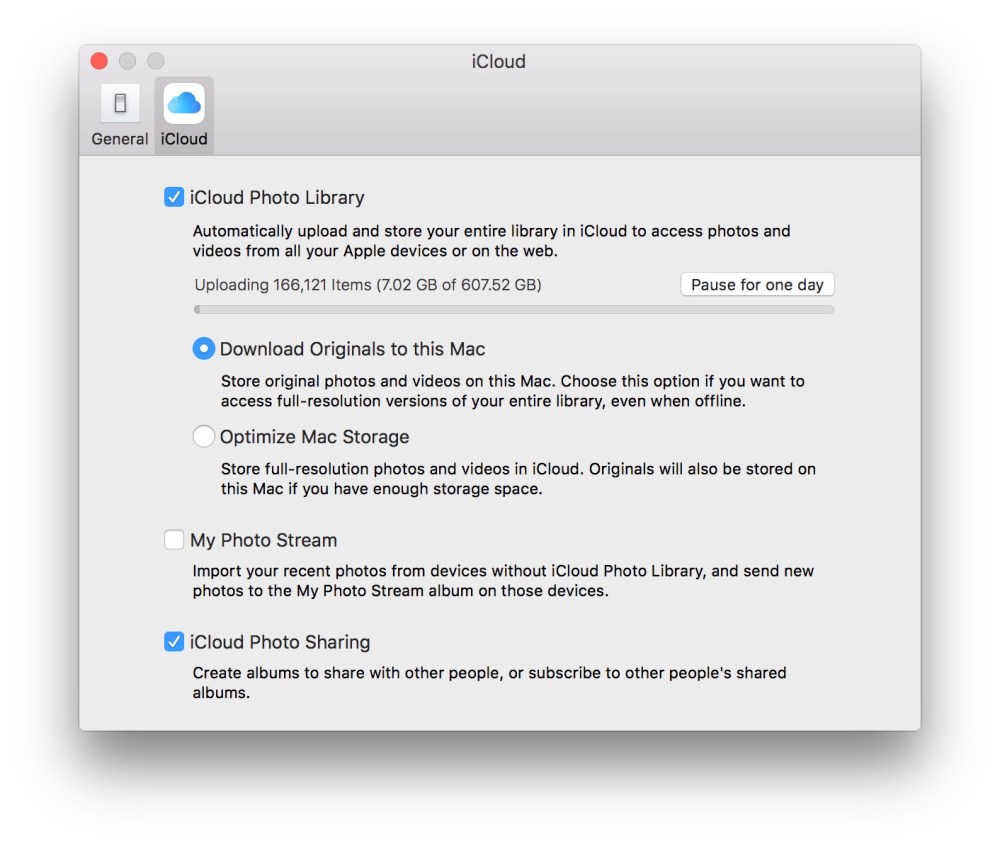 Last week, Apple sliced the cost of 1TB of iCloud storage down to $10 a month or $120 per year. While I still don’t think that’s a reasonable price to pay annually for access to a photo library, it’s getting closer. So for professional reasons, I decided to give iCloud Photo Library a try, even though it would require several major changes to my 1.4TB photo collection: moving 800GB of RAW images into a separate library, transferring the remaining 600GB of JPEGs from Aperture into OS X Photos, and coming up with some strategy for handling new or old photos once I exceeded iCloud’s 1TB limit.

Another long story, short: I went through all of that. Migrating from a wholly referenced Aperture library to a completely consolidated Photos library was a painful process, requiring three full days of manual day-and-night monitoring for Aperture and Photos, plus splitting a completely fine unified library in two. I can’t emphasize this enough: do not put yourself through this if you have a large photo library. In the end, the new Photos library wound up needing to sit on an external hard drive, because it couldn’t fit on my MacBook Pro. Optimistically, I thought everything would be OK once my collection was uploaded to iCloud.

It turned out that it wasn’t OK. The uploading process to iCloud was nearly as bad as Google’s. Even with better-than-basic broadband service, OS X Photos effectively killed my Internet connection during the uploading process, completely crippling all of the devices on my network while sluggishly sending photos to iCloud. A quick search online revealed that early iCloud Photo Library adopters had discovered the same problem months ago, and given up. At the rate things were going, I calculated that it would take around 45 days just to upload all of my photos to iCloud, assuming that I was willing to live with awful Internet service for a month and a half (and pay $10 per month for iCloud during the uploading process).

So, like many other people who found the reality of iCloud Photo Library to be far less appealing than the marketing, I stopped the iCloud experiment. Worse yet, I found myself stuck with a split-in-two Photos library I could no longer keep on my MacBook Pro, all of my RAW images stored separately, and no great option for getting everything in the cloud.

If I could, I would just reverse all of the changes and go back to having a unified Aperture photo library — a process I’m probably going to manually attempt after a day or two of recovering from the OS X Photos experience. Particularly in light of Apple’s abandonment of Aperture, I’m not going to tell you that this is a great or particularly forward-thinking option. But it’s better for my needs than Photos, which is at best underdeveloped and at worst a dead end for users with large libraries like mine.

What should you do? Based on my experience, if you have a small photo library, the choice between using Google or Apple really comes down to whether or not you want to pay for an unripe cloud-based solution. If you have a large photo library, you’re probably best off keeping it away from the cloud unless you’re willing to deal with uploading and other hassles. I personally wouldn’t be willing to pay for either of the photo services based on my experiences, which makes Google’s imperfect free service better for me than Apple’s imperfect paid one. But you can make the choice that’s best for your own photo library. My personal collection continues to reside on a G-Technology G-Drive USB, which I love.