How-To: Get the expensive Apple Watch Hermès look for under $100 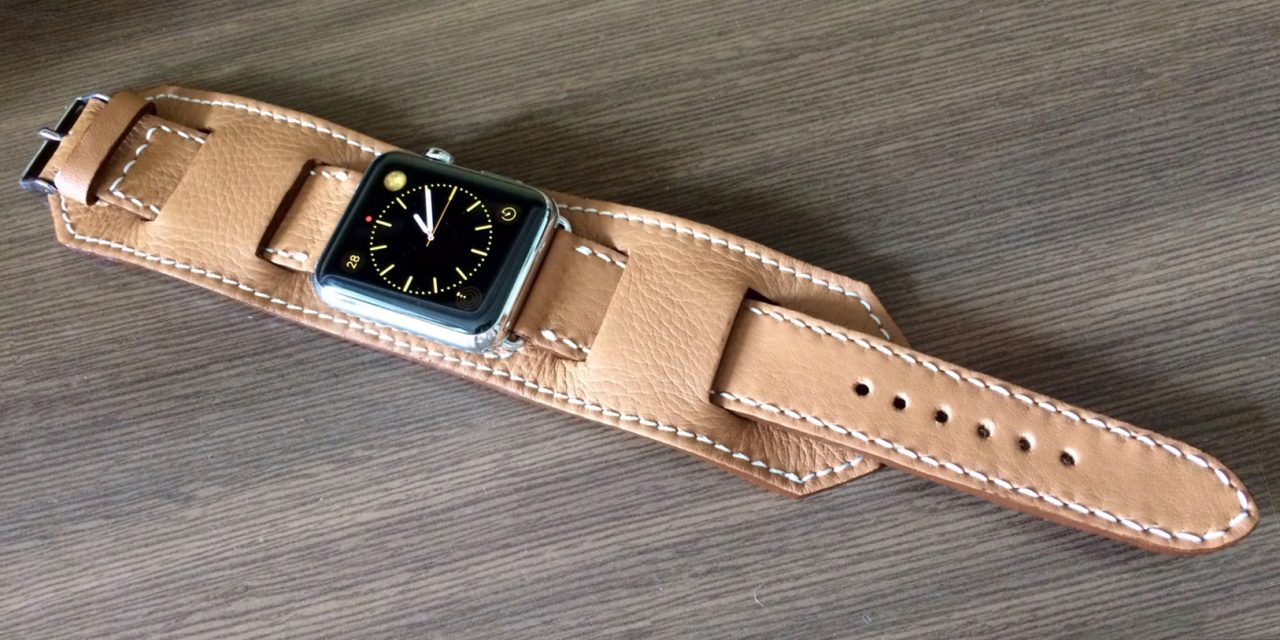 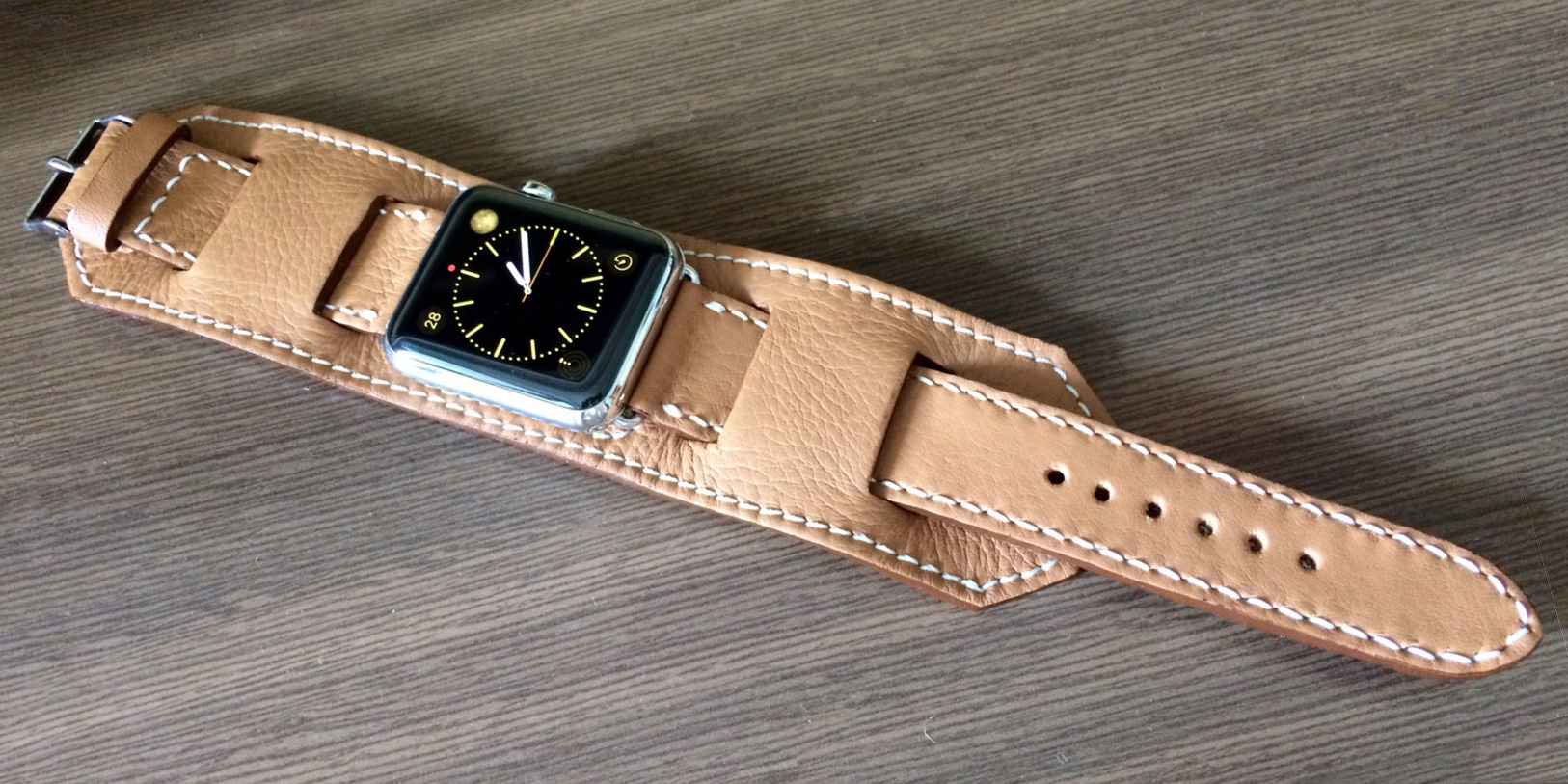 Apple uses the silver stainless steel Apple Watch as the base for the Apple Watch Hermès, but upgrades it with three Hermès leather watch bands: Single Tour ($1,100 model, 38mm or 42mm), Double Tour ($1,250 model, only 38mm), or Cuff ($1,500 model, only 42mm), representing a premium of over $500 to $900 depending on the band. Here are some third-party alternatives that let you achieve the same basic look without dropping the extra cash….

The Cuff is both the most expensive Apple Watch Hermès option — $1,500 — and the most limited, available only in a single 42mm size and color (“Fauve Barenia”). But third-party cuff alternatives are a lot more affordable and offered in a much wider variety of sizes and colors. Arguably the closest to Hermès is Black Forest Atelier’s $99.90 Leather Cuff Band (far left) which comes in 38mm or 42mm sizes, with your choice of stainless steel or space gray lugs, as well as three brown color variations: two-tone medium brown C1, two-tone dark brown C2, and the Hermès-like one-tone C3 (shown). Jack Foster Leather’s $165 Cuff Strap (center left) uses Horween Dublin leather in either dark cognac or English tan colors, similarly in 38/42mm sizes with stainless or gray lugs.

There are several other custom-made options, including the Leather Watch Cuff Strap from EternitizzzStrap ($120) and Goriani’s Leather Watch Strap ($82, 38/42mm). The former (shown center right) is solely for 42mm Apple Watches, made from French leather, and sold by default in “classic brown” with white stitching as shown; you can request customizations of the leather and stitching, and choose from lugs in silver, gray, black, gold, or rose gold. Goriani’s (shown far right) is the least expensive of the Cuff alternatives, but also looks the funkiest. It’s sold in 38mm or 42mm versions, but only one color. 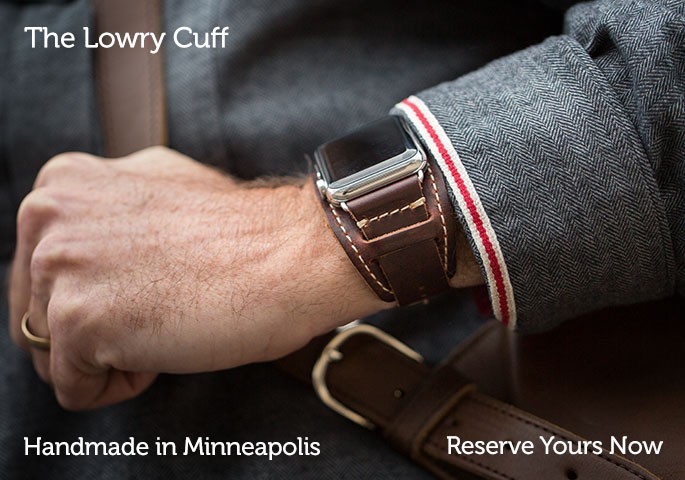 If you want to take a risk on something that’s less expensive, the V-Moro Cuff Band ($37, above) looks like a close knockoff of the Hermès cuff, and comes in brown, black, or red versions, each 38mm or 42mm. Made by Vilo Tech and shipped from overseas, this is advertised with some of Apple’s official Apple Watch Hermès product shots — something that should give you pause. Unlike what the photos suggest, none of the cuffs magically enables a regular Apple Watch to display the Hermès watch faces Apple includes with that model.

If you like the look of the double-wrapped leather band of the Apple Watch Hermès, but not the contrast stitching, there are a few options. San Antonio-based Arrow & Board makes a Double Wrap Strap ($99, shown left and center) in whiskey brown with your choice of black, silver, or gold lugs in 38mm or 42mm sizes, with either black or brass hardware. Brooklyn’s E3 Supply Co. has eight different colors of its Double Wrap Band ($139, shown right), each with stainless steel or black hardware, in 38mm or 42mm sizes.

Alternately, Leathersy offers a Double Tour strap (shown left) in five different colors: natural tanned, deep brown, navy blue, purplish red, and black. Unlike the Hermès version, you can choose from 38mm or 42mm sizes, as well as watch lugs in silver, black, gold or rose gold to match any Apple Watch. Also unlike the others, it uses a stud to hold the band on your wrist, and included hardware lets you reposition it for an ideal fit. The bands are $90 without lugs, or $110 with your choice of lug sizes and colors.

Goriani (shown right) sells a funkier, more obviously handmade version of the Double Tour with less precise contrast stitching for $60-$80, color-dependent. You can choose from black, red, brown, or high-contrast brown. Like the Leathersy versions, you can choose from 38mm or 42mm bands. The company uses Italian leather, and can custom-make a version to your specifications. You’ll have to order the Apple Watch lugs separately.

Once again, there are some lower-end options available, starting with a V-Moro version of the Double Tour (left) available for $36 in black, blue, brown, or red, Another company called Kartice sells black, brown, and blue Double Tours (center) for $37, as does a vendor named HappyCell, which has inexpensive-looking blue, black, red, brown and gray versions (right) for $25 each. As mentioned above, this collection of vendors tends to use official Apple Watch Hermès images in promoting their products, but you shouldn’t expect the Hermès watch faces to be available on a non-Hermès Apple Watch.

The Single Tour is Hermès’ least distinctive leather band, and one that can easily be approximated using any number of different leather straps at various price points. RDSTrading sells entry-level Single Tour-like bands for $30 each in your choice of 38mm or 42mm sizes, including black or brown colors similar to Hermès’ Noir and Fauve Barenia options. Zenok Leather custom-makes fancier $85-$95 versions in various shades of red, brown, and black, letting you choose the stitching and leather colors you prefer. You can go with something subdued like the Hermès options, or a higher-contrast version such as soft red or baseball glove black. 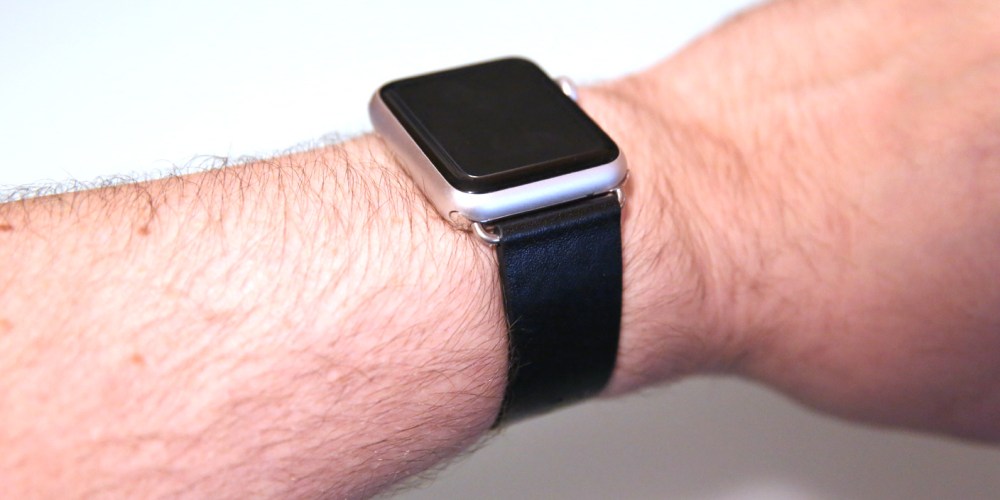 I’ve covered a couple of other Single Tour alternatives in recent reviews, notably Incipio’s Premium Leather Band and the Nomad Strap, each of which bears more than a passing resemblance to the Hermès Single Tour. They may not be exact matches, but then, with $60 to $150 price points, you’ll save a lot of money versus the $1,100 Apple Watch Hermès, regardless of whether you start with a $349+ Apple Watch Sport or $549+ Apple Watch.