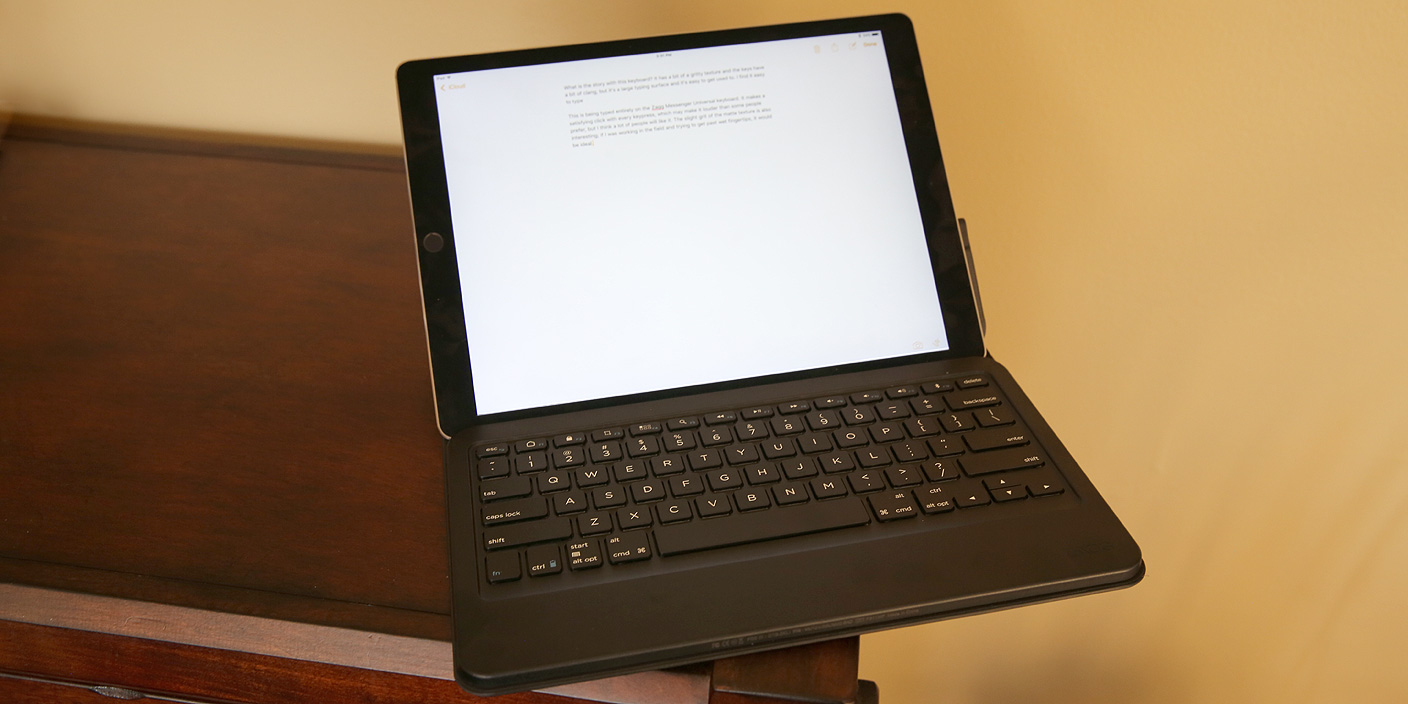 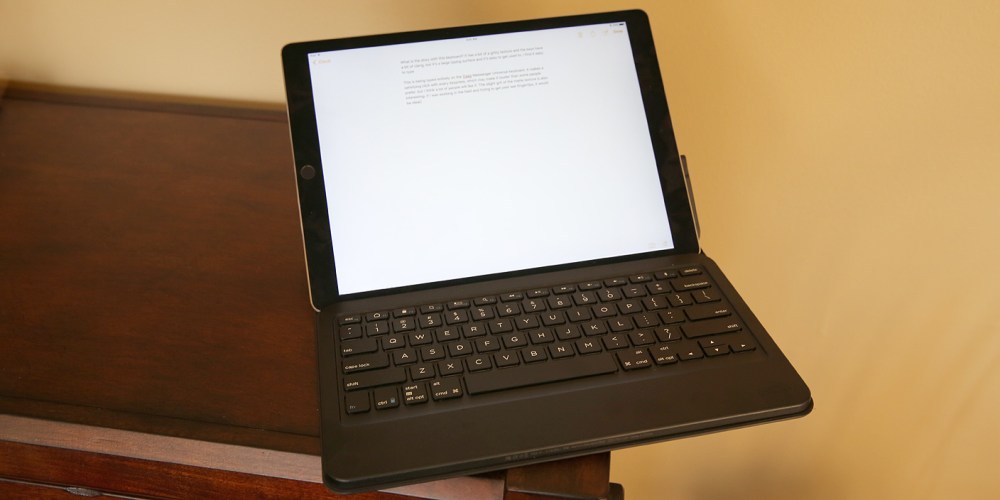 There aren’t many iPad Pro-specific keyboards out there — Apple’s $170 Smart Keyboard and Logitech’s $150 Create (reviewed here) are the first two, if you can find them, with at least a few others announced and on their way to stores. But there’s really no need to wait on iPad Pro-specific keyboards, or spend a king’s ransom for one. Tons of iPad-compatible Bluetooth keyboards are already available, and thankfully at much lower prices.

Depicted with an iPad Pro on its box, Zagg’s Messenger Universal ($70) is clearly an alternative to Apple’s Smart Keyboard. Just like Apple’s accessory, Messenger Universal combines a full-sized keyboard with a magnetic iPad Pro-ready stand that folds down to a small size. But it skips the iPad Pro-only Smart Connector in favor of Bluetooth, and rather than serving as an oddly thick screen cover, takes the shape of a standalone folio that you can carry around as needed. Although it fits the iPad Pro perfectly, Messenger Universal works with all iPads — and other devices — so you needn’t feel constrained to using the keyboard with only a single tablet… 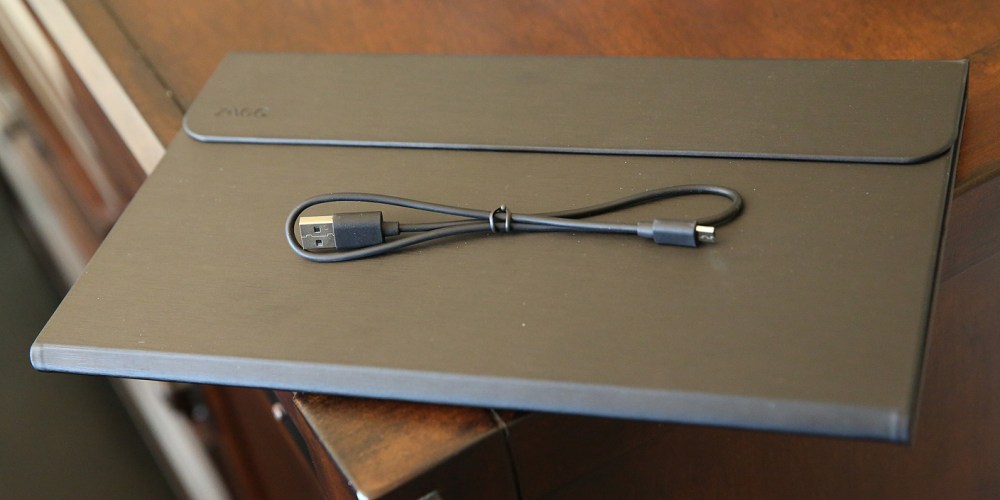 Measuring roughly 12″ wide by 7.3″ tall by 0.6″ thick at its largest points when closed, Messenger Universal is around twice the thickness of the iPad Pro, roughly the same width, and around 1.3″ shorter. Much of the thickness comes from a brushed metallic-style vinyl and microfiber folio that wraps around the all-plastic keyboard; this folio unfolds into a three-segment Smart Cover-like triangular stand, leaving the keyboard to stick out around 7.3″ from the front of the reclining iPad. 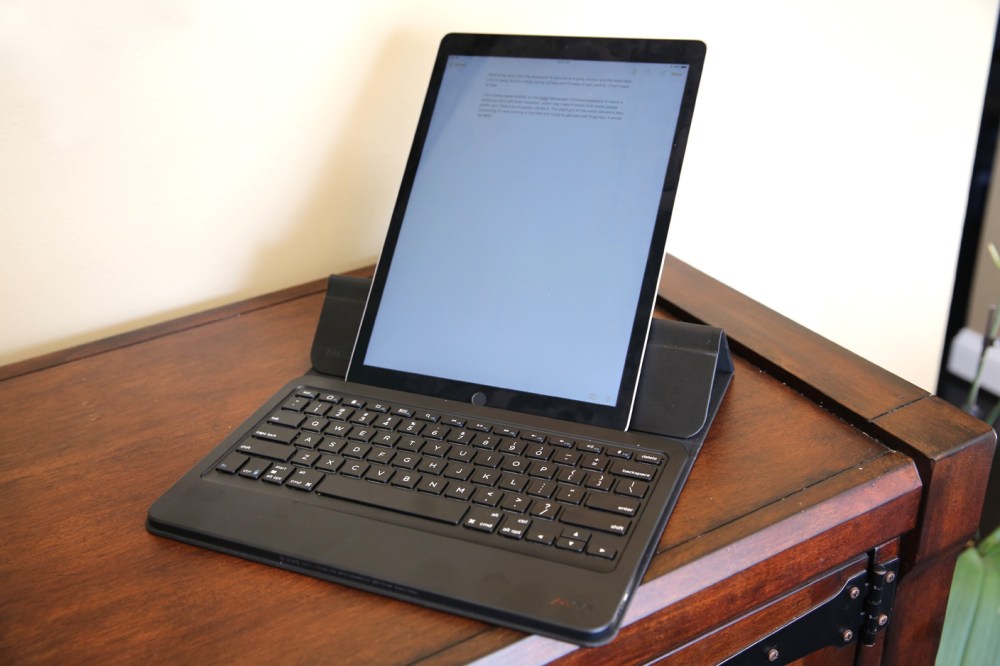 Because Zagg uses Bluetooth wireless rather than a Lightning or Smart Connector to connect the keyboard to the iPad Pro, Messenger Universal has an advantage over Apple’s Smart Keyboard and Logitech’s Create: it can accommodate an iPad Pro in either landscape or portrait orientation. While I personally prefer to type on the Pro in landscape mode, and Zagg’s box suggests that landscape typing will give you the “best experience,” some readers have been asking for a keyboard with options, and Messenger Universal accommodates them. The iPad Pro slides into a lip right underneath the top edge of the keyboard, and is lap-safe regardless of whether it’s in portrait or landscape orientation, though clearly a little more precarious in portrait mode. 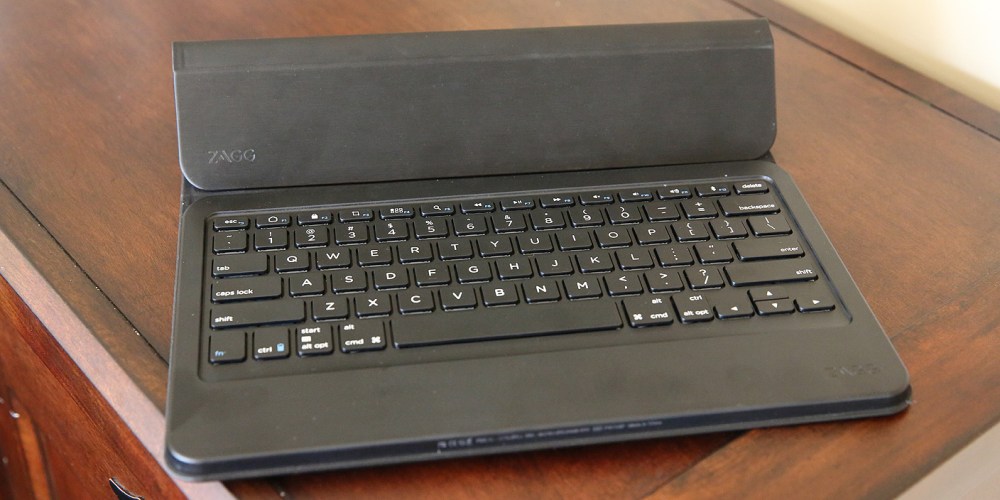 Zagg’s keyboard design is in the middle of the pack when it comes to design frills. Pairing is effortless — just press the Bluetooth button (F12), select Messenger Universal from the iPad’s Bluetooth menu, and they work together without further interaction; compatibility is similarly guaranteed across multiple platforms, including iOS, Windows, and Android devices. Like most Bluetooth keyboards, Messenger Universal has a three-month rechargeable battery inside, and comes with a micro-USB cable for charging. A power switch on the side toggles the keyboard on and off, but magnets inside the cover can put the keyboard to sleep when the lid is closed, conserving battery life. 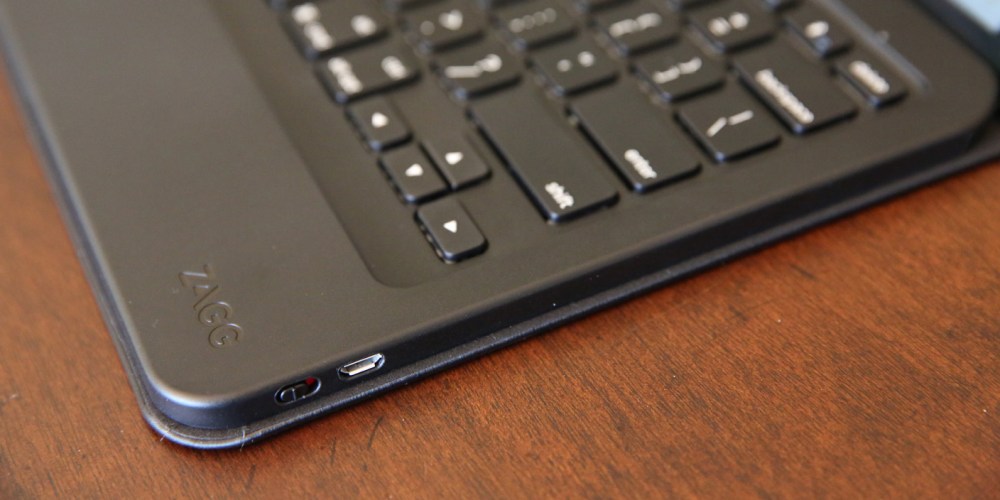 Messenger Universal’s island-style keys have a little more travel than the ones on Logitech’s Create, and a matte texture that may particularly appeal to users with slippery fingers. Apple and Logitech tend to favor keys with a smooth texture that’s great for indoor use, but not grippy, which is where Zagg’s material excels. Users who prefer audible “clicks” when typing will like the clitter-clatter of typing on Messenger; those seeking quieter keys may prefer to look elsewhere. While the keyboard could very easily pass for the typing surface of Apple’s classic black plastic MacBook, it has iOS-ready function keys such as a Home icon, a Lock button, search, and audio control buttons, which work across platforms. And unlike Create, Messenger Universal has a dedicated screenshot button (F3) and a dedicated multitasking button (F4), but no brightness controls, nor keyboard backlighting. 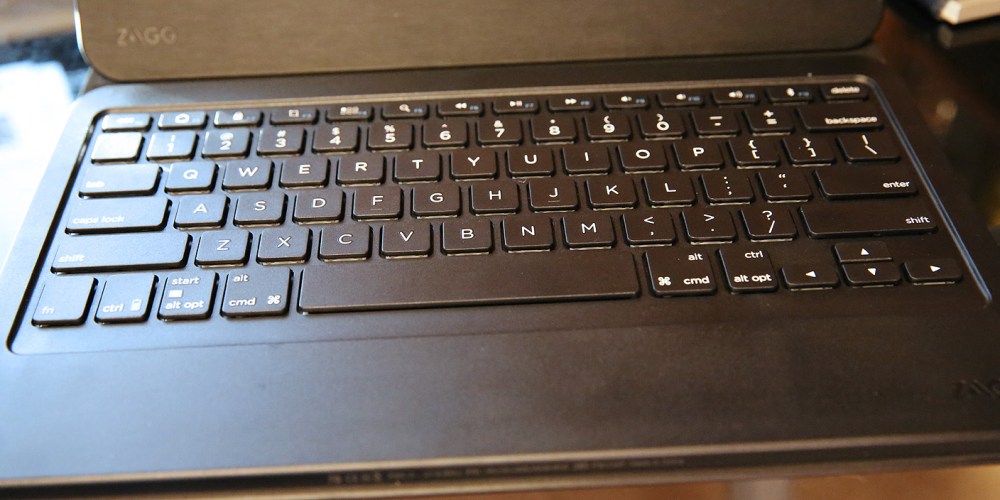 If there’s any real issue in Messenger Universal’s design, it would be in the triangular stand, which is strong, but only supports one angle; as these photos show, you can fold the lid in two ways, but the actual difference between them is really minimal. Zagg describes the roughly 45-degree angle as “ideal,” which I suspect people on airplanes may take issue with, and it’s at least 15 degrees more of a recline than I’d personally find perfect. During typing on a flat surface, I found it to be a comfortable angle for both seeing and touching the screen — assuming there’s enough surface space to use it — but for video viewing, use in a lap, or in cramped quarters, you may wish for a different angle.

After using the iPad Pro for a week, I have to say that I feel considerably more inclined to recommend a “use it only as needed” keyboard such as Messenger Universal rather than a “take it everywhere” option like Logitech’s Create. The key selling point of a tablet is to free the user — most of the time — from the weight and bulk of a laptop, and to the extent that a keyboard is occasionally needed, Messenger Universal can be there to augment the iPad Pro with both a stand and a superior typing surface. If you want a keyboard to use specifically with your iPad, particularly one that perfectly fits the large iPad Pro, Messenger Universal is a very good option for $70. At this point, I’d only suggest spending more if you need the backlighting, multi-device pairing, or smaller size that something such as Logitech’s $100 K811 can offer, and have another stand in mind for your iPad.