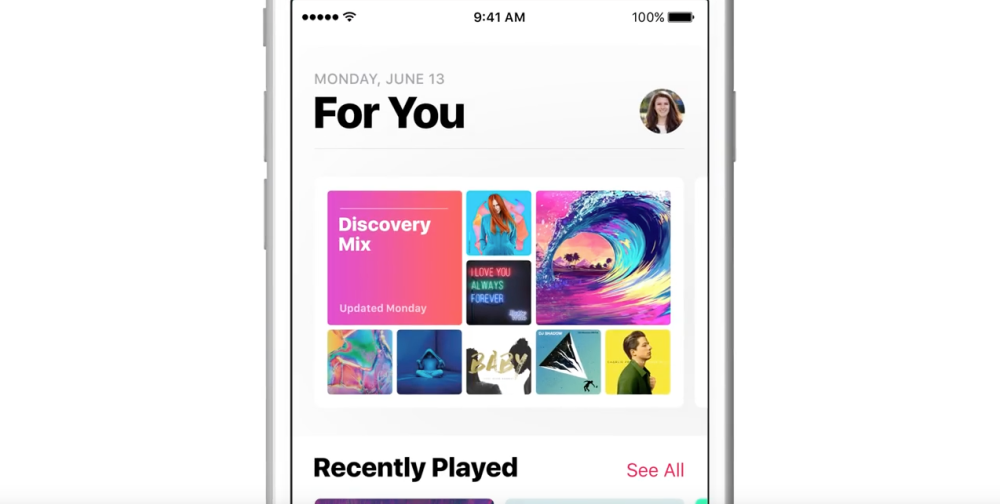 Apple earlier today unveiled a major redesign for the Music app as part of iOS 10. We reported earlier this year on many of the changes, but now we’ve had the chance to get our hands on the redesign in all of its glory. The Music app in iOS 10 brings a host of changes, many of them visual, but also a few new features as well.

The first thing you’ll notice when you open the new Music app is that you’re taken immediately to the “Library” tab of the app, which shows a breakdown of all the music you’ve most recently added and options to view either by playlist, artist, album, song, or downloaded. The edit button next to the very bold “Library” heading allows you filter which category options appear.

The album page is pretty much the same in iOS 10 as it has been, but there are a few changes. For instance, the three dots that used to allow users to do things like add a song to the queue or share it are no longer there. Instead, this menu is accessed with 3D Touch on the iPhone 6s and iPhone 6s Plus and by long-tapping on earlier devices. There are, however, three dots at the top that control the entire album.

The actual menu accessed by doing this has also been refreshed. Each option now has an icon next to the text. The “Add to Up Next” option has also been replaced by a “Play Later” option, but the functionality is still the same. There’s also a new “Dislike” option at the bottom, even if you’re listening to a song that’s in your Library. Presumably, this affects what comes up when listening to Radio.

This redesign also makes it more obvious to tell if a song has been downloaded for offline listening. While the previous Music app simply showed a phone with a check mark, the iOS 10 Music app shows a “Downloaded” indicator in bright coloring.

The Now Playing screen has also been refreshed. The interface looks a lot like a stack of cards. Unfortunately, lyrics support is nowhere to be found within the first beta of iOS 10, but it will presumably come at a later date as Apple showed it on stage. Whenever it is added, it will be accessible by swiping up on the Now Playing screen, essentially adding another “card” to the stack. Swiping up also allows you to access your Up Next queue.

When you pause a song on the Now Playing Screen, the album art shrinks slightly, while hitting play returns it to normal size, which is a nice little detail. Along the bottom of the Now Playing screen is a download option and the three dots to bring up the aforementioned menu. The Now Playing bar at the bottom has also been slightly refreshed to show album art and be slightly larger.

Next up, the “For You” tab has also been redesigned. Instead of the large banners the previous Music app showed, you’ll now see a side-scrolling list of albums. Everything is still optimized specifically for each user. For instance, For You is currently showing me a playlists specifically “for fans of soundtrack” presumably because of my Hamilton obsession. It also shows “Recently Played,” “Heavy Rotation,” and various other headings, each of which is individually tailored.

The “Browse” tab is also entirely new, replacing the “New” tab. Along the top are side-scrolling headers much like we’ve seen in the past, but otherwise the interface is very simplistic. There are quick links to “New Music,” “Curated Playlists,” “Top Charts,” and “Genres.” The “New Music” interface shows “Hot Tracks,” new albums, new music playlist, new artists, music videos, and “Featured Curators.”

The “Radio” tab is still headlined by Beats 1 and there’s a new “Explore Beats 1” option that dives into more content from Apple’s always-streaming radio service. On this screen you’ll see what’s currently live, what’s upcoming, Apple’s own hosts (Zane, Ebro, and Julie), and all shows. Tapping on a show takes you to its dedicated page with a on-demand content, much like a podcast. It’s still a bit wonky and slow in this beta, but it’ll hopefully improve over time.

The new Apple Music interface is heavily focused on being bright and bold, which has pros and cons. But it’s important to remember that this is only the first beta and that we will undoubtedly see changes before the final iOS 10 build is shown off this fall.

In the meantime, let us know what you think about iOS 10’s new Music app in the comments and what changes you’d like to see before this fall. Check out our massive screenshot gallery below, as well.