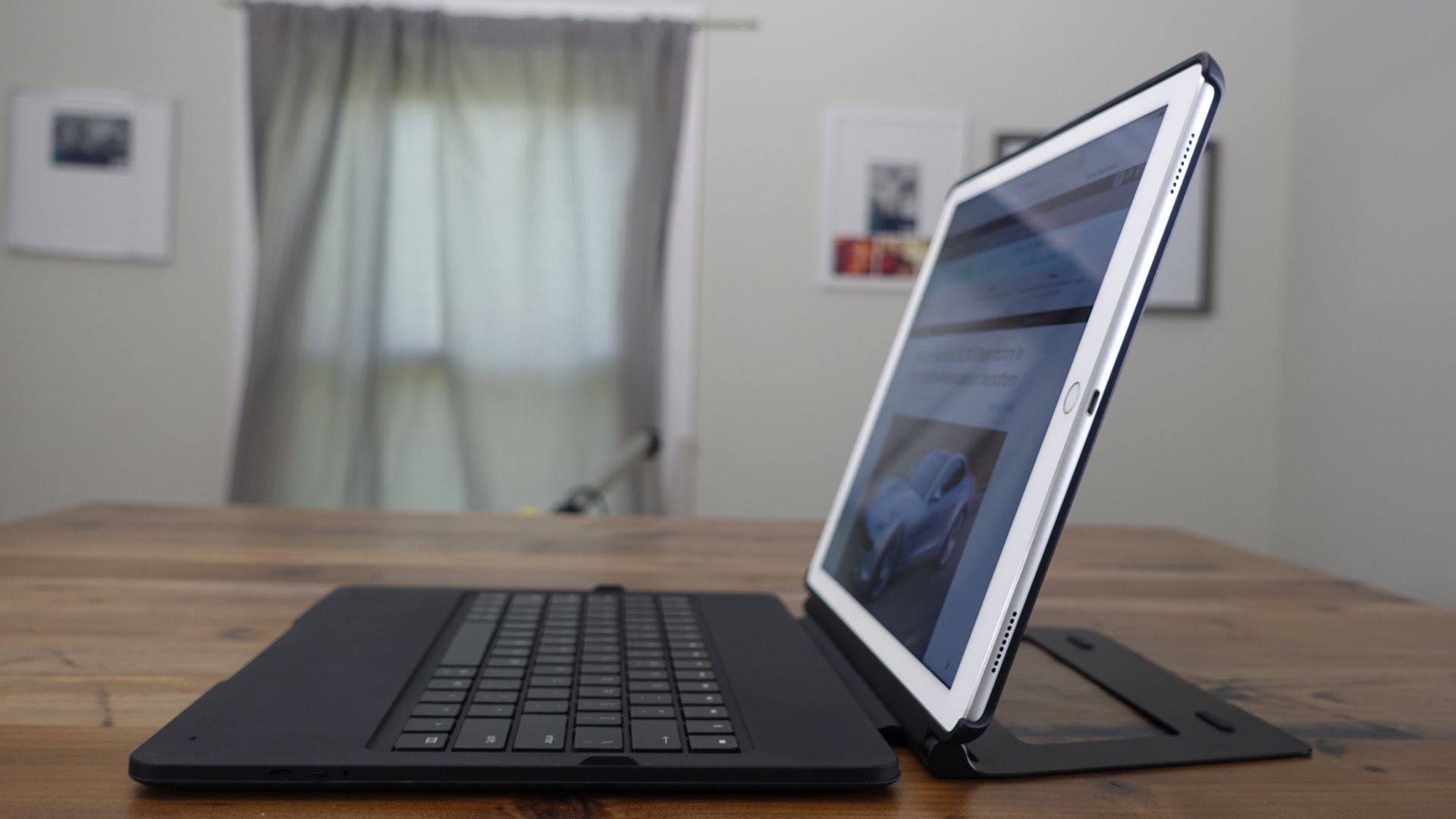 When Razer first announced its Mechanical Keyboard Case for the 12.9″ iPad Pro, I had mixed feelings about the idea. On one hand, the thought of using a true mechanical keyboard with decent key travel, real actuation, and reset points sounded glorious. On the other hand, just how good could a mechanical keyboard case for an iPad possibly be?

To be honest, when you consider what typical mechanical keyboards look like, the whole idea seems a little absurd. Mechanical keyboards are, in general, big hulking contraptions that take up lots of space. That’s not a knock against these keyboards, as they are wonderful to type on, but it just sounds odd to think of two devices, which traditionally couldn’t be any more different in style and design, working together.

It might also seem weird to think of Razer — a company who’s best known for making PC gaming peripherals — creating an iPad accessory. Keep in mind, however, that Razer also makes PC laptops, and if you’ve seen its hardware, you know that it cares deeply about looks and design. I’ve even heard some refer to Razer as the “Apple of the PC world” — a sort of backhanded compliment about its design-focused products.

Razer’s Mechanical Keyboard Case is, for the most part, a good-looking product with obvious nods to the current machines in its laptop line. The keyboard surface itself is one big slab of dark gray plastic that evokes thoughts of the company’s Razer Blade laptops.

You’ll find enough real estate on the keyboard surface to have an adequate amount of space to rest your wrists. The experience felt so similar to an actual laptop surface, that I found myself instinctively reaching for a non-existent trackpad.

Razer’s Mechanical Keyboard Case consists of two parts. There’s the keyboard surface portion described above, and the case portion that the 12.9″ iPad Pro fits snugly inside of. As you would expect, the case features cutouts that keep the Lightning port, speakers, camera, and microphones free from obstruction.

While the case protects the sides of the iPad Pro via a slight lip, the top and bottom of the tablet is more or less exposed to the elements. With this in mind, don’t expect this case to fully protect your iPad Pro even when the clamshell is closed. You’ll still need to exercise care when placing it in a bag, backpack, etc. 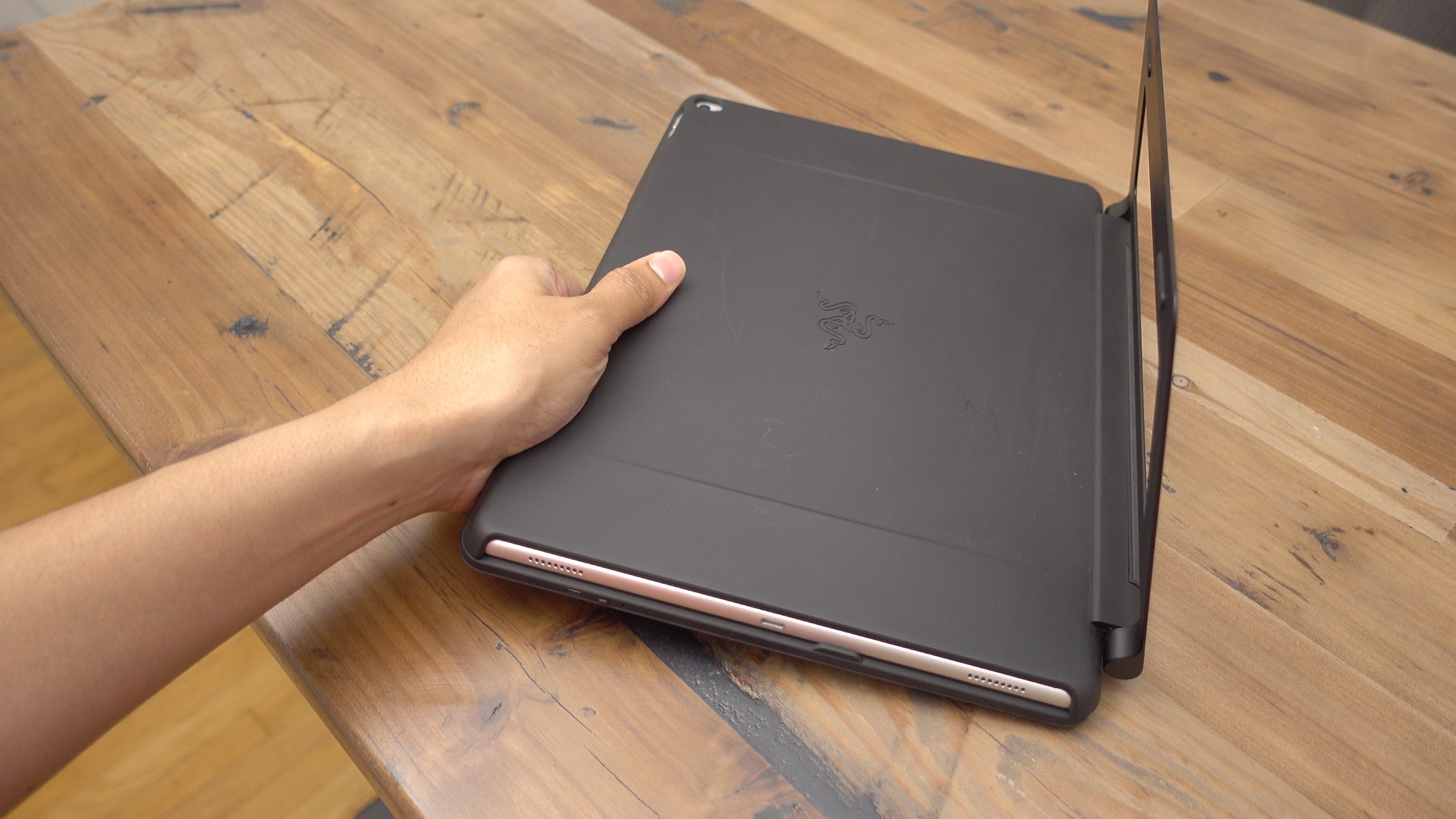 The kickstand adds another moving part to the picture and can get in the way at times. You’ll need two hands to close it, and even then, it tends to want to pop out so that it doesn’t sit flush with the rest of the case. For all of its merits, using the kickstand, and especially putting it away, feels a little cumbersome.

If you need more extreme viewing angles, or you simply wish to use the case as a standalone stand, it’s easy to detach the keyboard portion of the setup from the case that houses the iPad. The keyboard attaches via magnets, and can thus be removed and reattached with ease. Not only does this allow for more flexible typing setups, but it also means that you can pair Razer’s mechanical keyboard with other Bluetooth-enabled devices. 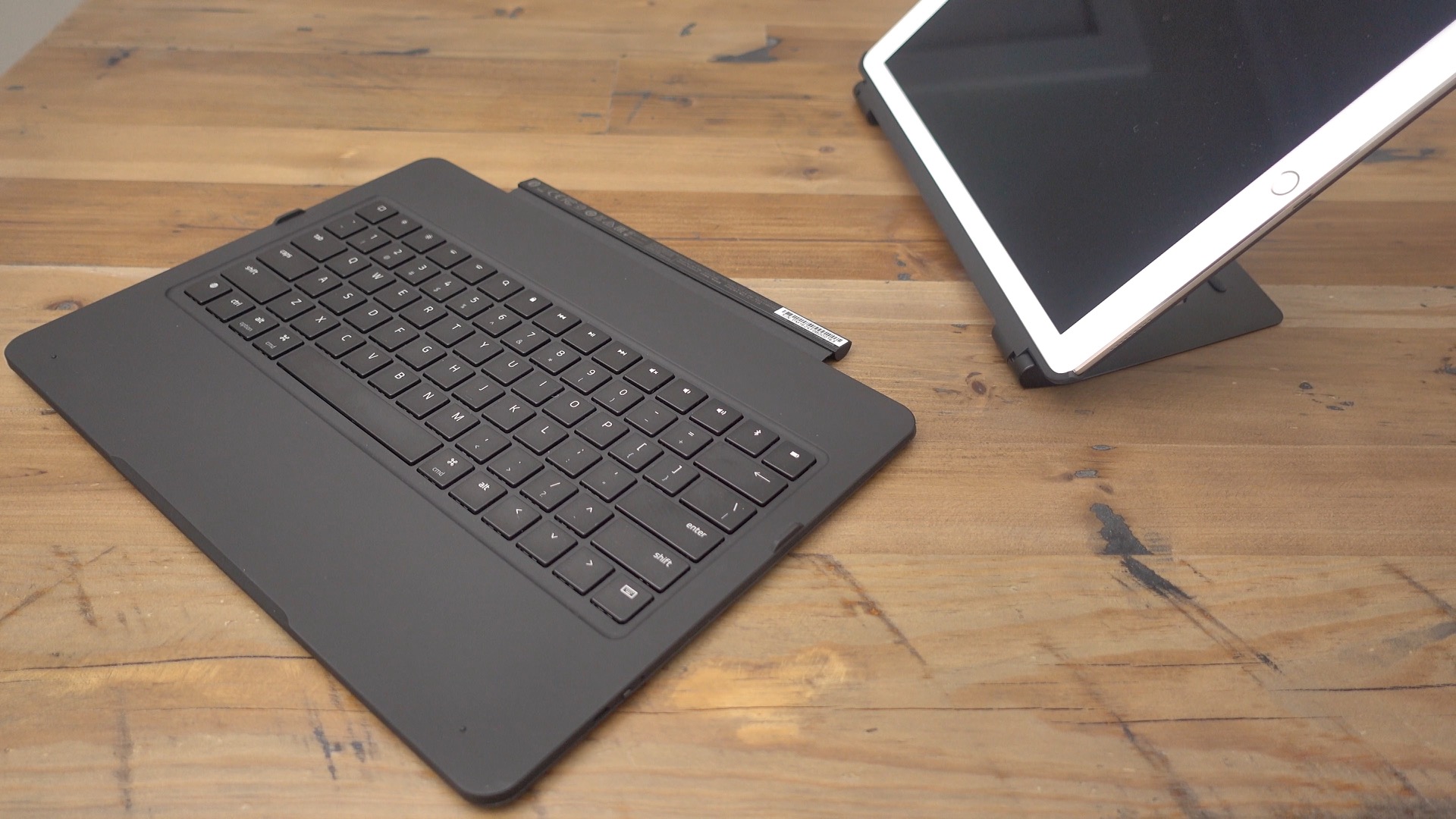 Because of the strong magnets that attach the keyboard portion of the setup to the case, I found that it was possible to type with the iPad Pro in my lap. I doubt that Razer would actually recommend such a setup due to, at the very least, potential ergonomic issues, but I was able to lap type with little to no problems.

There’s no way around the fact that once you start adding all of the parts together, Razer’s Mechanical Keyboard case is quite bulky. That’s probably why Razer opted not publish weight and dimension specs on its product website. A quick look at Amazon shows that the keyboard case weight is 2.2lbs, and the dimensions come in at 9.5 x 0.9 x 12.3 inches.

Once you have your iPad mounted inside the case, and you factor in the mechanical keyboard surface and the kickstand, it’s not hard to imagine how bulky it is. The 12.9″ iPad Pro is already a behemoth in its own right, so it shouldn’t be surprising that adding a keyboard case, a mechanical keyboard case no less, is going to add some significant bulk to the equation. 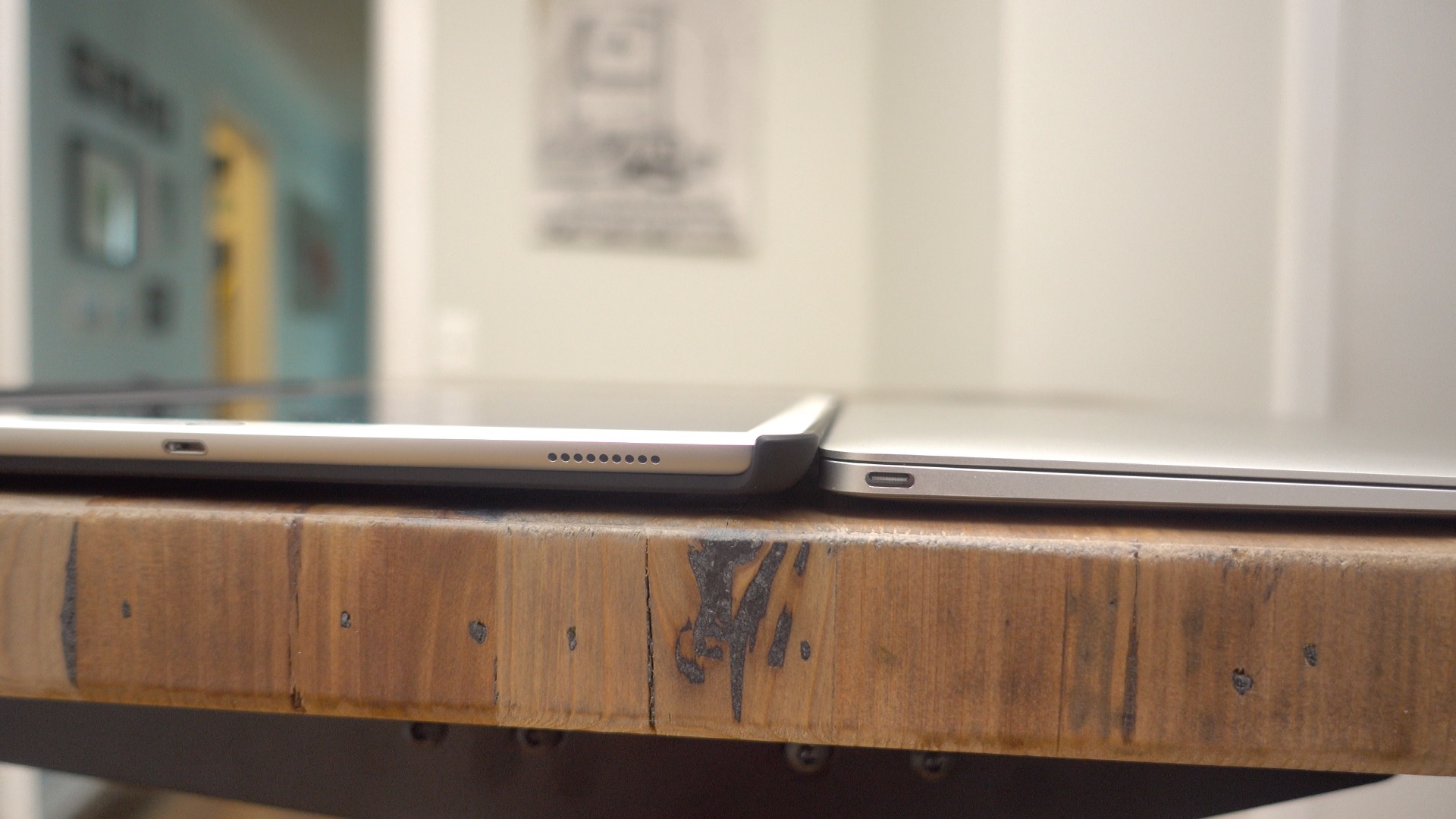 For me personally, that kind of bulk is a deal breaker for everyday usage. But I’m also the same guy that opted to edit 4K videos on an underpowered 12″ MacBook Pro, so take my opinion in that area with a grain of salt. To be honest, save for Apple’s own Smart Keyboard + Smart Cover setup, I’m not a big fan of any of the iPad Pro keyboard cases due to how bulky they are.

First and foremost, you get excellent key travel for an iPad keyboard case. The mechanical key switches are real key switches, albeit low-profile ones, that fit inside of a relatively thin housing. 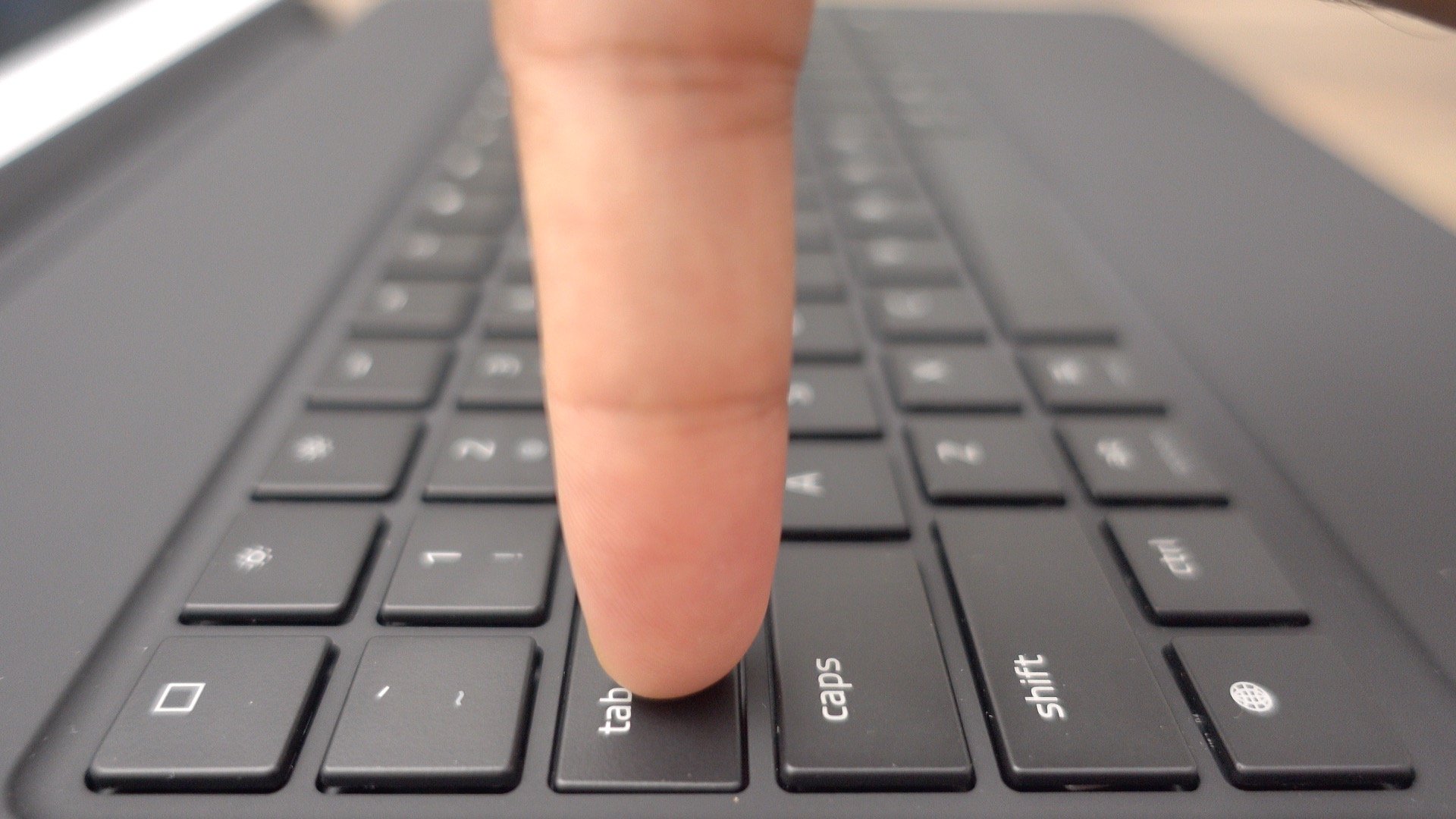 Yet, despite the diminutive setup, there is real key actuation to be found here, and it requires a certain amount of pressure — 70 grams to be exact — to invoke each key. Mechanical key switches are what give each key press that satisfying clicky sound that makes it evident, both audibly and tactile-wise, that a key was pressed successfully.

Granted, the low-profile switches are still a far cry from the Cherry MX Brown switches that I enjoy on my full-sized mechanical keyboard for the desktop. That said, if you’re someone who does long form typing from an iPad on a regular basis, this keyboard is worth strong consideration.

The Razer Mechanical Keyboard Case comes with backlit keys that feature 20 brightness levels; that’s four more than the 16 brightness levels that you’ll find on a MacBook’s keyboard. The backlight can be adjusted via two dedicated keys next to the screen brightness shortcut keys. 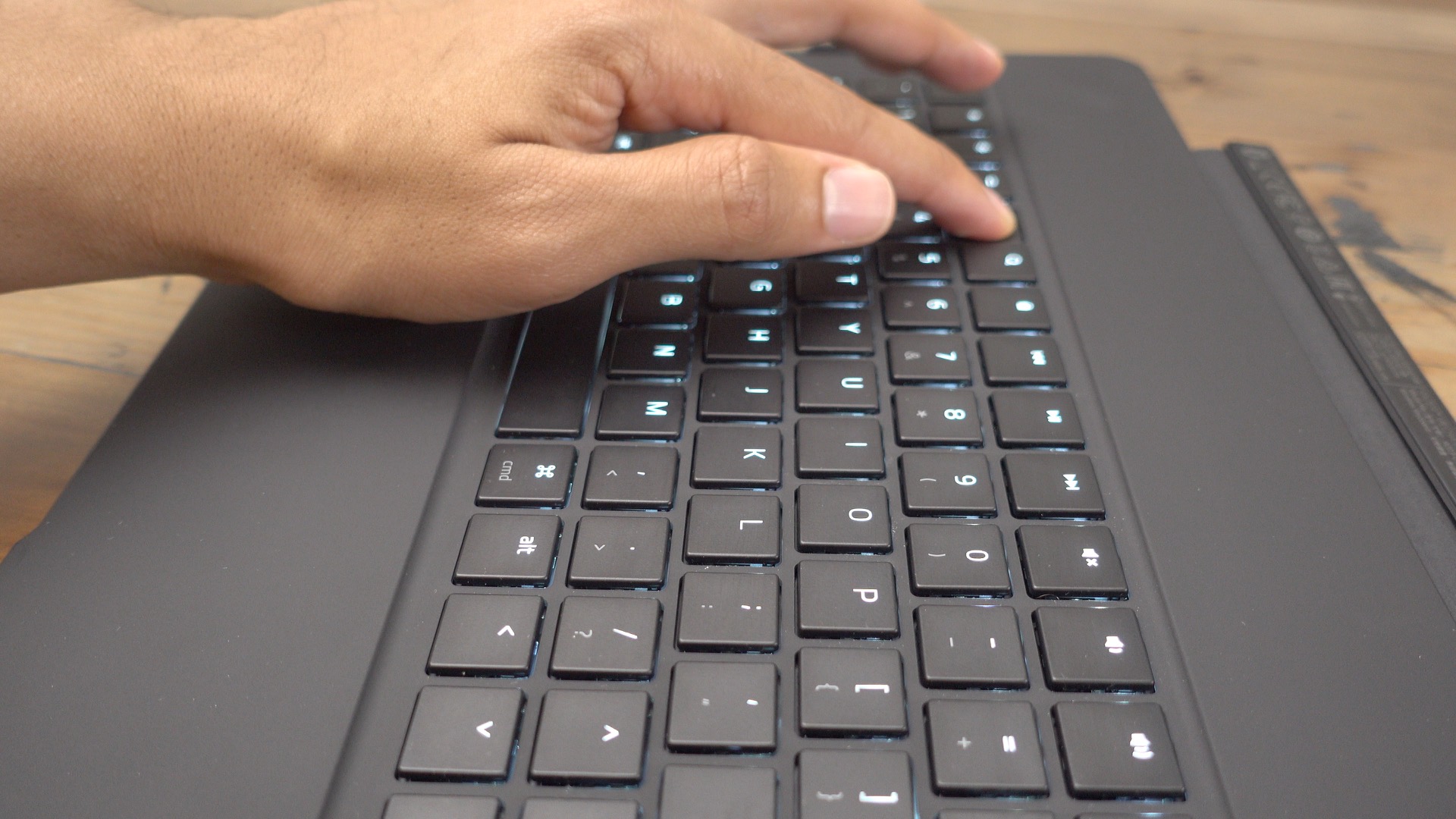 One downside to the backlit keys is the extreme effect it has on battery life. Without backlighting enabled, Razer’s case can last an assured 600 hours on a single charge via the included microUSB cable. With the backlight set to maximum brightness, the battery life drops down to a mere 10 hours.

If you’re a fan of Apple’s iPad Pro Smart Connector, then you’ll be disappointed to learn that Razer’s keyboard case doesn’t support the feature. Although support among third-parties is limited, the Smart Connector is superior to traditional Bluetooth connectivity in a couple of ways: first, it negates the need to charge peripherals, because the Smart Connector delivers power directly from the iPad; two, it allows peripherals to instantly pair with the iPad Pro without needing to mess with Bluetooth settings.

If you’re currently using Apple’s Smart Keyboard Case, or one of Logitech offerings that takes advantage of the Smart Connector, then going back to a Bluetooth keyboard case may seem archaic. While I tend to lean that way as well, consider a couple of reasons why Razer made the decision to go Bluetooth-only. 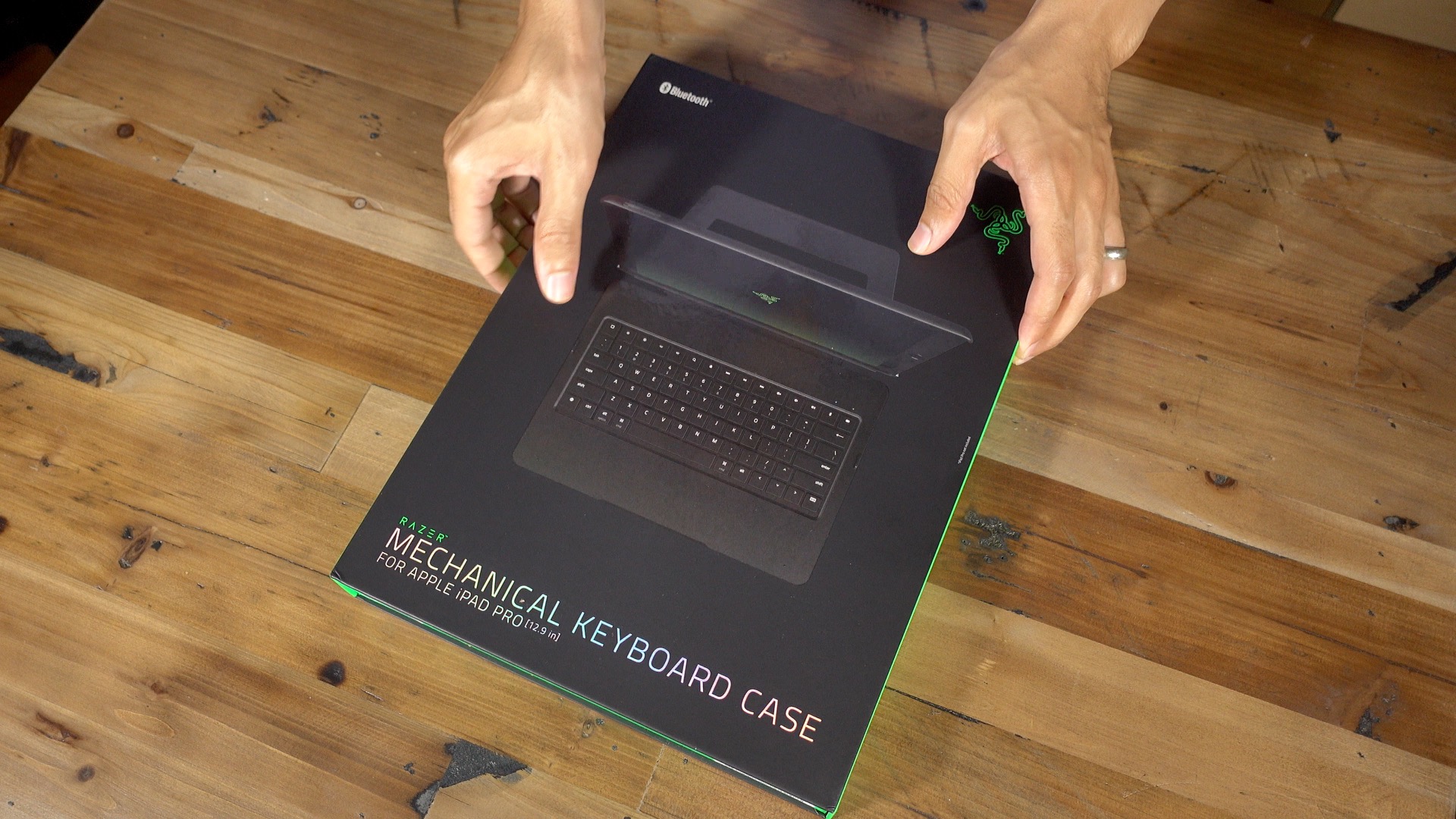 First and foremost, using a Bluetooth connected keyboard case won’t drain your iPad’s battery as much as a Smart Connector-enabled case. When you consider the fact that Razer is offering backlit keys that can drain the case’s battery in as little as 10 hours, it’s clear to see that Bluetooth was the right way to go.

Even more importantly, Razer’s keyboard surface can detach from the case that houses the iPad Pro. This, of course, automatically disqualifies it from relying on the Smart Connector for connectivity.

If you use your 12.9″ iPad Pro for work on a regular basis, and your work involves long form typing, then the Razer Mechanical Keyboard Case is worth strong consideration. Thanks to the low-profile mechanical key switches, I was able to type much faster on the Razer keyboard than even my 12″ MacBook keyboard, and I enjoyed the flexibility that the detachable case + kickstand brought to the table. I was also able to lap type using this case, though that’s probably not something that Razer would recommend doing.

The biggest downside with this case is its bulkiness. It’s considerably more bulky that my 12″ MacBook, and thicker than a 13″ MacBook Pro. When you start getting into that area of bulk, it makes one begin to question the practicality of such a setup, even if the typing experience is far and away better than typing on Apple’s Smart Keyboard.

The kickstand is also, for all of the positive value that it brings to the equation, kind of finicky. It doesn’t always want to close easily, and it adds another layer of cumbersomeness to set up.

If you can live with the bulkiness of the case, the lack of a Smart Connector, and its steep price, then head over to Razer’s website to purchase Razer’s Mechanical Keyboard Case for $169.99 direct. The case is also posted on Amazon, but has availability 1-2 months out.