Review: The Raumfeld One M is a wireless streaming speaker with incredible sound [Video] 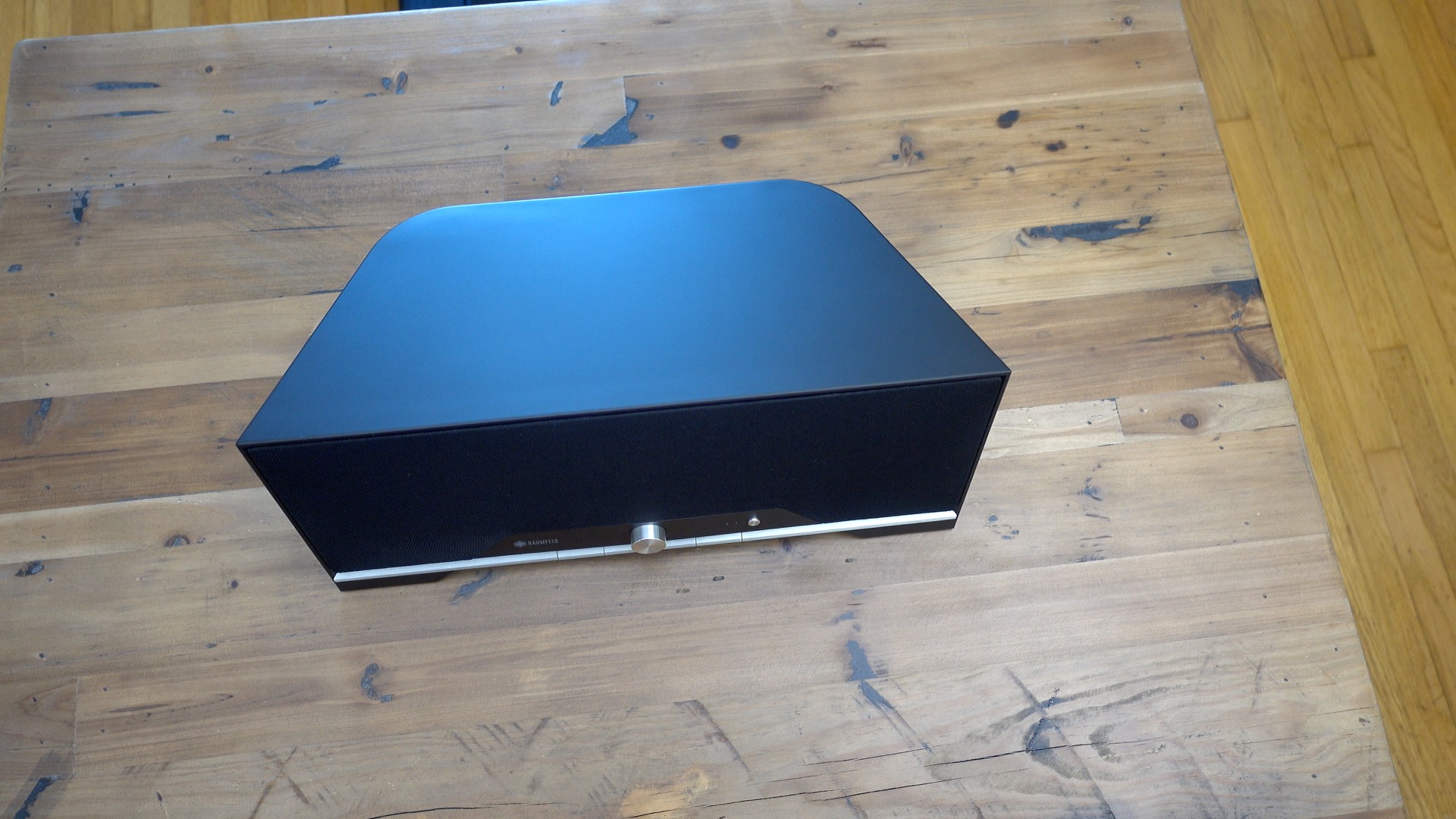 When it comes to multi-room audio solutions, Sonos is about as ubiquitous as it gets, but German audio manufacturer Raumfeld is looking to get into the action with its own set of wireless speakers.

Its 120-watt One M Wireless Speaker (Amazon) has been sitting on my desk for the last few weeks, and like Sonos, it brings easy-to-configure wireless audio streaming to any room in the house. Raumfeld sent me two speaker setups to test, the aforementioned single speaker One M, and the Stereo Cubes — an option that delivers a wider sound stage.

I’m still putting the Stereo Cubes to the test, but have used the One M for long enough that I feel comfortable speaking about its pluses and minuses. If you subscribe to one of the unit’s supported streaming services, and are aware of its shortcomings, then the One M can be an excellent pick.

Let’s first address the elephant in the room. As of now, Raumfeld’s speakers don’t work with Apple Music or Google Play Music, although support for Google Cast is scheduled to land sometime soon.

Whether Raumfeld’s speakers will ever gain support for Apple Music is anyone’s guess. If Apple’s streaming service is an absolute must-have, then you’ll need to look elsewhere, at least for the time being.

And keep in mind that these speakers do not feature AirPlay or Bluetooth support, so you can’t use either of those technologies as workarounds to play Apple Music.

If you’re a Spotify Premium or Tidal subscriber, however, then the One M gets a lot more interesting. The benefit of an Internet-connected wireless streaming speaker is that the connection is between the speaker and the Internet. Thus, it can continue playing even if your phone leaves the network, receives a phone call, etc.

The One M is a 5-driver 2-way stereo single-speaker solution that comes with a built-in down-firing subwoofer for awesome sound throughout the whole frequency range.

The speaker rests on two feet that are positioned so that the high and mid-range drivers fire at a slight upward angle. The feet also serve to give the down-firing subwoofer room to breathe.

At just a hair under 9 pounds, and dimensions of 16.1 x 7.9 x 7.1 inches, the One M is a solidly built speaker that will remain firmly planted wherever it is stationed. 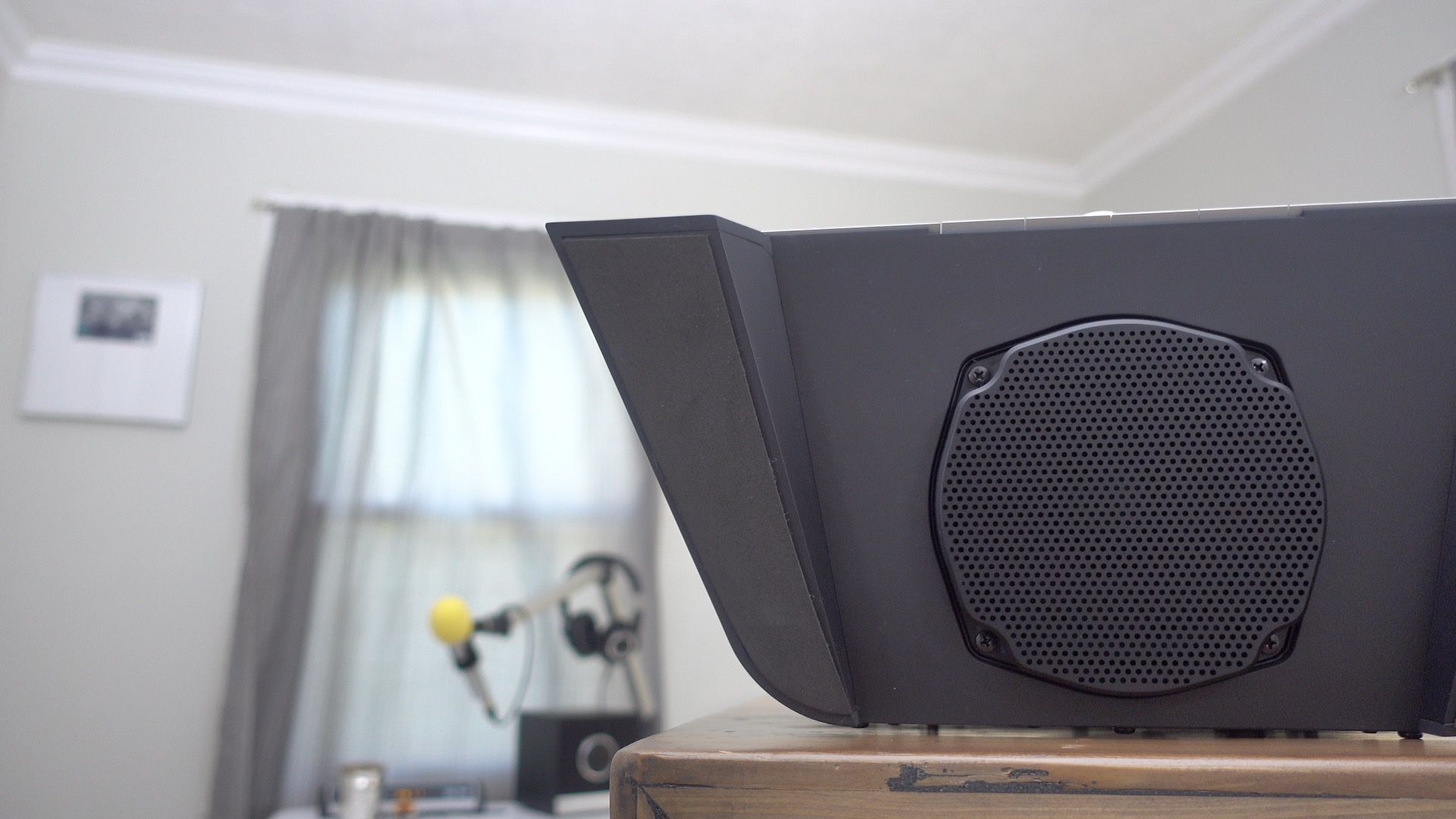 The speaker housing is constructed out of black or white MDF with a non-removable mesh speaker grill. Beneath the drivers rests brushed metal accents and buttons for controlling power and volume. You’ll also find four handy preset buttons near the bottom of the speaker for quick one-touch access to favorite Internet radio stations, albums, or playlists.

One thing that I appreciate about Raumfeld’s speakers is that they are clearly designed to take a front-and-center role in the living space. With brushed metal accents and knobs, it’s a look that’s purposely designed to be seen and shown off.

I’d feel totally comfortable placing the One M on my living room mantle, in my bedroom, in my office, or in virtually any other living space.

Although the Raumfeld One M is designed to work wirelessly, it does feature an Ethernet jack to connect directly to a router. I’ve tested the One M using an Ethernet connection and it worked well, but doing so disables its wireless connectivity. If you ever plan on moving the speaker around the house, you’ll want to stick with wireless connectivity for the most flexibility. 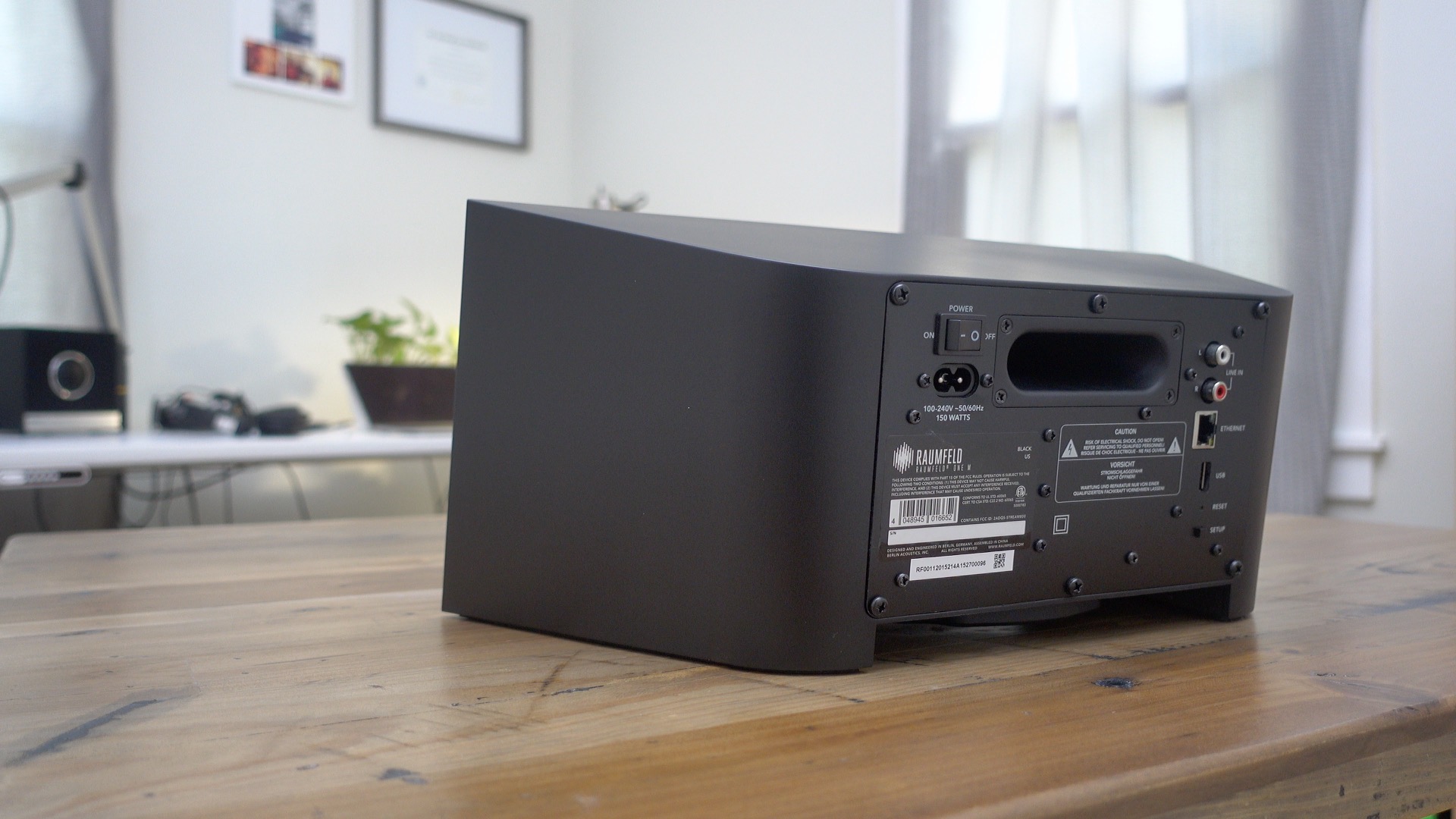 Right above the Ethernet jack, on the rear of the One M, rests a pair of RCA line inputs. These inputs can be used for line level connectivity for an external device, such as a record player, CD player, MP3 player, mixer or other analog source. The great thing about the line input is that it can be shared across the network to other Raumfeld speakers in a multi-room setup. I’ll discuss that more in a follow-up post.

Lastly, you’ll find a USB port for sharing music from a USB drive. The same port also has the ability to charge your iPhone.

If you’ve never used a multi-room wireless speaker before, it might seem strange that it doesn’t come with a remote. This is because your iPhone, iPad, or other smartphone functions as the remote.

You’ll need to download the Raumfeld app to both set up and control your One M. The setup process is relatively easy, and involves pressing the setup button on the rear of the speaker cabinet, and going through a few initial steps inside the app.

The Raumfeld app lends access to a variety of music streaming services, which include the following:

As mentioned earlier, conspicuously missing from the currently supported list is Apple Music and Google Play Music. Considering that these are the two flagship music services for Apple and Android users, such omissions have to be carefully considered for anyone looking to delve headfirst into the Raumfeld ecosystem. The good news is that Google Cast support should be coming soon via a software update.

Like the Sonos app, the Raumfeld app integrates many of these services directly within the app itself. This means that you can, for instance, control SoundCloud music and Tidal music from a single unified interface.

Unfortunately, the same thing can’t be said about Spotify. Although you can control Spotify playback via the Raumfeld app, you can’t actually search for Spotify songs, or directly select which song you wish to play. To fully control Spotify, you’ll need to open the Spotify app and use its Connect feature, which is only available for Spotify premium subscribers.

The app’s initial setup process is fairly straightforward, but I found that its navigation could use some additional polish. The app is too cluttered, and filled with nooks and crannies that give it a steep learning curve.

I’ve also ran into occasional glitches and hiccups that forced me to restart the app to restore its normal functionality. This especially occurs when playing back music using Spotify, and attempting to switch to another streaming service. 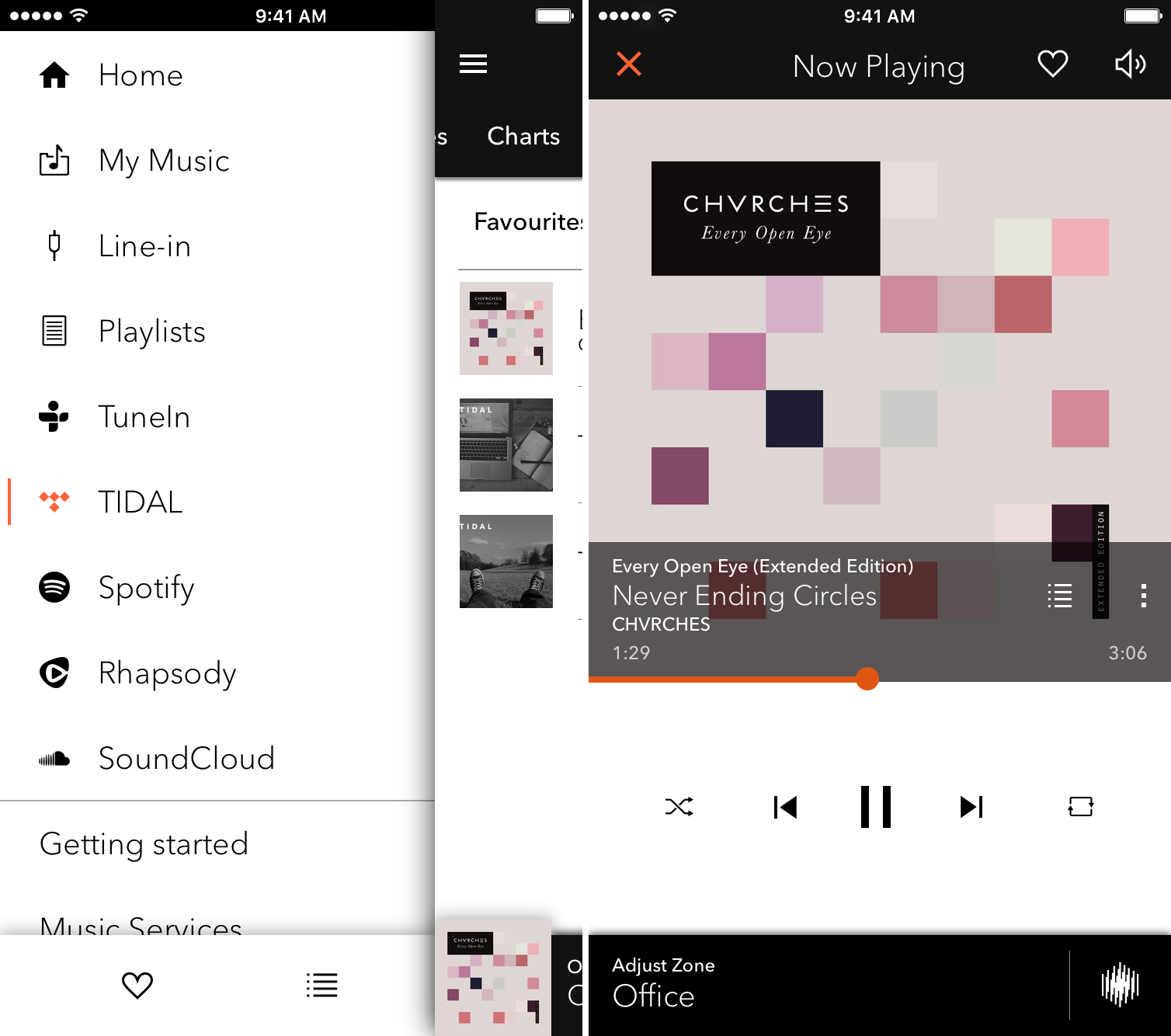 If you’re primarily a Spotify Premium user, then you won’t have to worry much about navigating around the Raumfeld app, since Spotify playback is managed via its own app.

…but it has potential

That’s not to say that the app is terrible, because it’s not. If you’re a Tidal user, then you’ll enjoy the fully integrated experience with that particular music service. You can also mix and match songs from multiple music services to combine them into a single playlist that plays back as if it were all coming from one source.

Of course, the most glaring flaw with the entire Raumfeld ecosystem is the lack of support for two of the top streaming services — Apple Music and Google Play Music. I’m not trying to sound like a broken record, but if Raumfeld hopes to compete in a space traditionally dominated by Sonos, it needs to eventually rectify this issue.

If there’s one thing that the One M excels at over everything else, it’s easily the sound quality. The sound pumped out of the One M’s 5-driver setup is seriously impressive. Even at low volume levels, the speaker filled my entire office with crystal clear sound.

Not only does the One M push forth clear highs and mids, but you get awesome low end sound thanks to the built-in down-firing subwoofer. The sub, as you might imagine, makes a world of difference when compared to similarly-sized speakers that lack such a feature. That said, it’s best if you can place the unit in a corner to hear (and feel) the full benefit of the subwoofer. 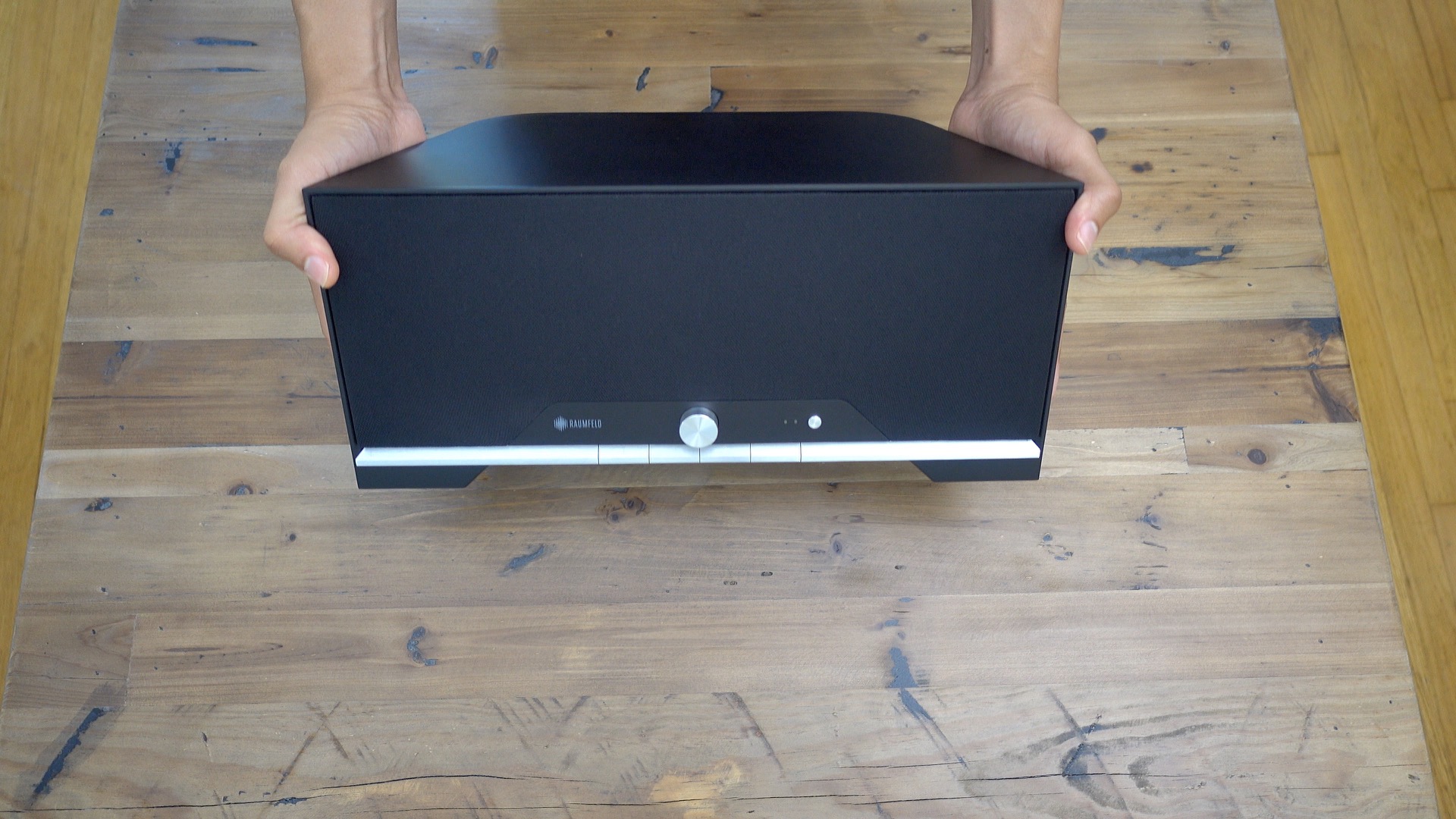 The One M gets super-loud, certainly louder than my ears could stand when I cranked the volume dial all the way up. Although I was satisfied with the out-of-the-box sound, I did opt to widen the sound stage — a preference found inside of the app’s settings. Out of the box, the sound stage is a bit narrow, which may be noticeable depending on speaker placement and room size.

The bottom line is that One M’s sound quality is phenomenal, which goes a long way towards making it easier to overlook the app’s shortcomings. An app can be improved and iterated on, while the speaker hardware can not. Fortunately, Raumfeld got it right on the first try hardware-wise.

The front panel of the One M features four preset buttons that can be assigned to specific albums, playlists, or radio stations. For example, while listening to a radio station on TuneIn, simply press and hold the desired preset button for 3 seconds. You’ll hear a little chime to let you know that the preset was set successfully. 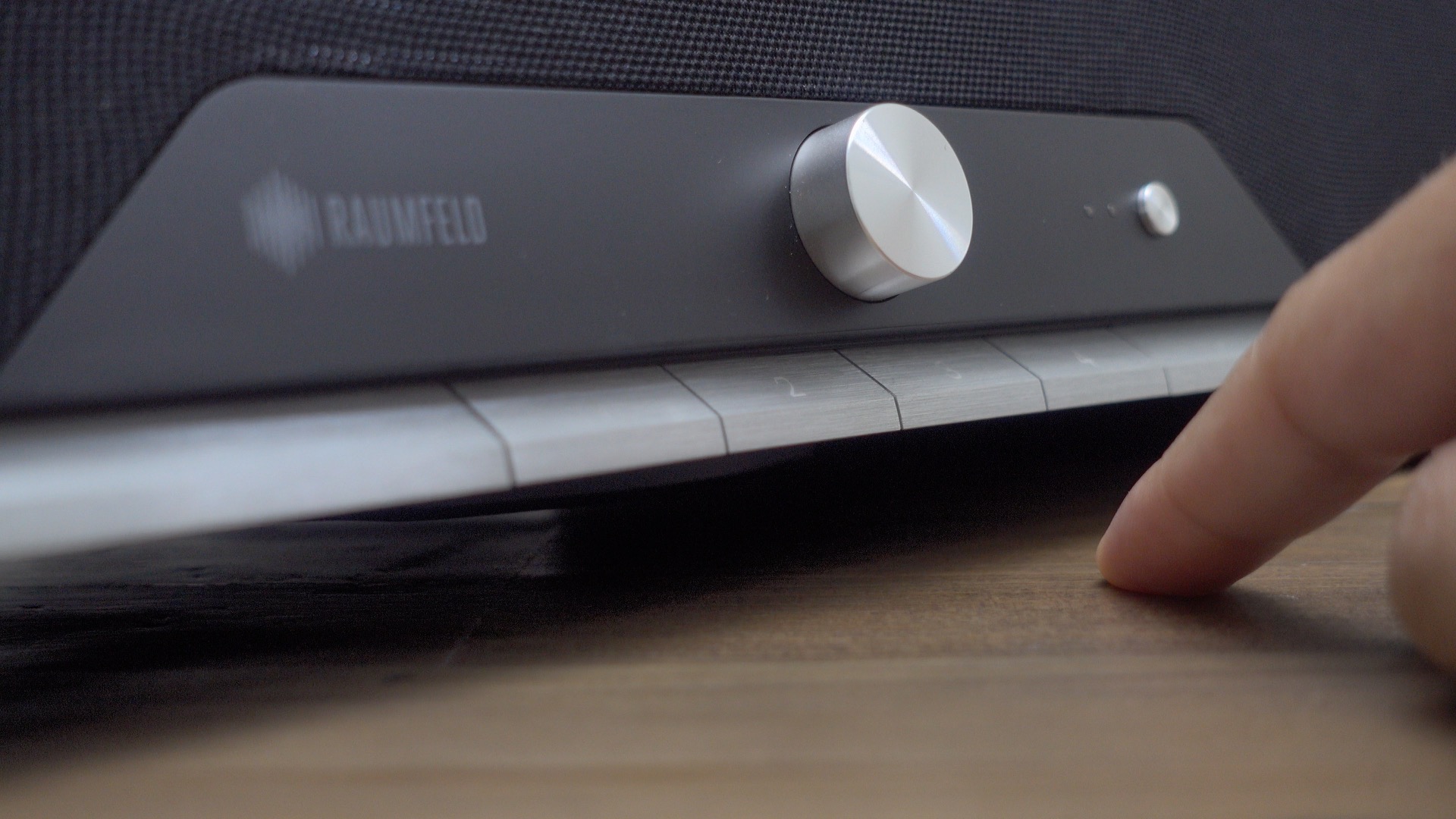 Presets allow you to quickly begin music playback without needing to interface with your iPhone. It’s especially great for radio stations, but works fine for playlists across many of the music services registered in the Raumfeld app. Sadly, there’s no way to skip tracks or go back to the previous track without launching the app, which seems like a missed opportunity in my opinion.

It’s disappointing that there’s no support for Apple Music or Google Cast as of yet, and the app itself can be quite frustrating and finicky at times. The lack of AirPlay support may also be a deal breaker for many. That said, Raumfeld knocks it out of the park when it comes to the most important feature for a speaker in this price range: sound quality.

If I’m just starting off with establishing a wireless speaker setup at home, then I’m seriously considering Raumfeld’s ecosystem, especially if Apple Music isn’t a prerequisite. The build quality, styling, and most of all, sound quality, make it a worthy Sonos competitor from a pure sound perspective.

In a follow-up hands-on, we’ll discuss Raumfeld’s Stereo Cube speakers, talk about establishing a multi-room setup via the app’s preferences, and showcase streaming line level analog audio to other rooms.

You can purchase Raumfeld’s One M from Amazon for $499. Visit Raumfeld’s official website for more details.