Apple’s HomeKit feature lets you control “smart” lights with Siri or Apple’s new Home app on iOS 10, and there are generally two ways to make your home lighting more intelligent. You can change your light bulbs to “connected” bulbs that talk to a bridge over Wi-Fi, or you can replace your light switches with “connected” switches that take the same bridge approach.

The Lutron Caséta kit takes the latter approach by replacing your existing light switches with smart switches that make your traditional light bulbs work with Siri. There are notable differences between both approaches including cost and ease-of-setup which I’ll unpack below. And if bells and whistles don’t impress you, Lutron takes the crown for having the most elegant solution to HomeKit lighting with one exception…

If you’re exploring Apple’s HomeKit and want to upgrade your home lighting, you may think of Philips Hue first but Lutron Caséta has a few benefits over the Philips approach. For example, Lutron replaces the light switches in your home, not the light bulbs, so you can likely use your existing bulbs which may be cheaper than Hue bulbs. This is especially beneficial when one light switch controls multiple bulbs.

Aside from potential price savings, replacing the light switches and not the light bulbs tends to be more elegant and easier to operate. Take my office lights for example. My ceiling has two bulbs that connect to one wall switch. Using the Philips system, I can replace both bulbs for $15/each then control them with my iPhone or Apple Watch, but this requires leaving the wall switch in the ‘on’ position.

Turn the switch to ‘off’ and HomeKit can no longer control the lights because they have no power. The solution is to add a Philips Hue Dimmer Switch for $25. This also helps kids and family members control the lights without using Siri or apps. Price comparisons can vary depending on your needs, but Lutron’s solution is the simplest after installation. You have a single light switch that anyone can control versus two light switches with one that you ignore and must leave on.

I say Lutron is the simplest after installation because it’s much easier to set up Philips Hue. Installing Lutron requires turning off the power to the room where you’re working, removing the existing light switch, and installing the Caséta switch. The installation process is well documented and only takes about 10 minutes once you get the hang of it, but I spent about an hour my first time as I wanted to be especially careful replacing a wall switch for the first time.

The switch itself features four buttons: on, brighter, dimmer, and off. On and off have full width buttons in the usual locations: top and bottom. A middle button is split in half with a nub on the brighter control to make it easy to feel in the dark. Seven green LED lights are always dimly lit to show that everything is connected properly and to serve as a guide for the switch in dark rooms. These LED lights are only visible when the light is on when you change brightness to indicate what percentage you’re picking. 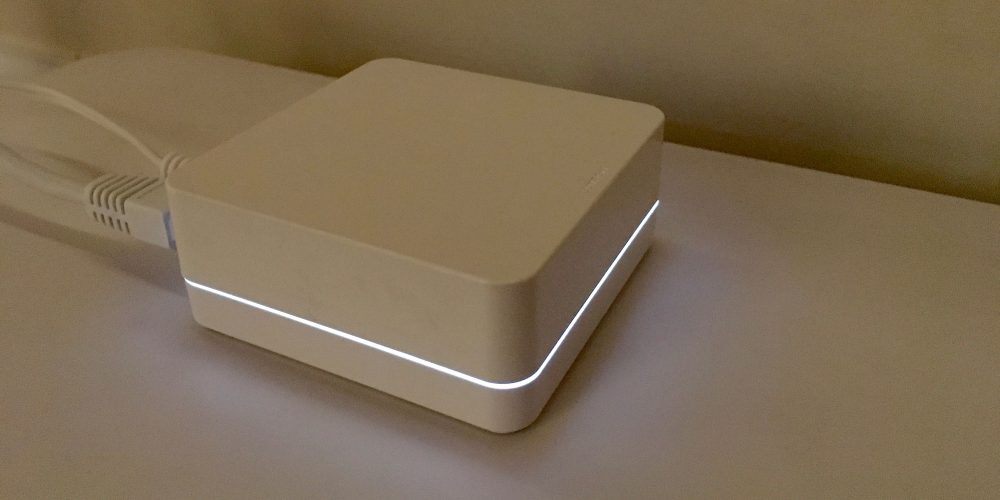 I’m not a huge fan of LED status lights on technology. Apple does LED lights tastefully but most companies are way too liberal with LED lights. This became enough of a problem for me (my home office looked like the cockpit of a jet plane at night) that I stuffed my networking hardware in a couple of Bluelounge CableBoxes.

Lutron’s powered bridge connects to your router via Ethernet and features a wraparound white LED light to signal that everything is working OK. It’s way more Apple-y with its thin white strip versus the Philips Hue bridge which has multiple blue LED lights. If LED lights don’t bother you, the Lutron bridge is better designed and doesn’t look cheap (but mine stays out of sight). It works just as well and there’s no light pollution. 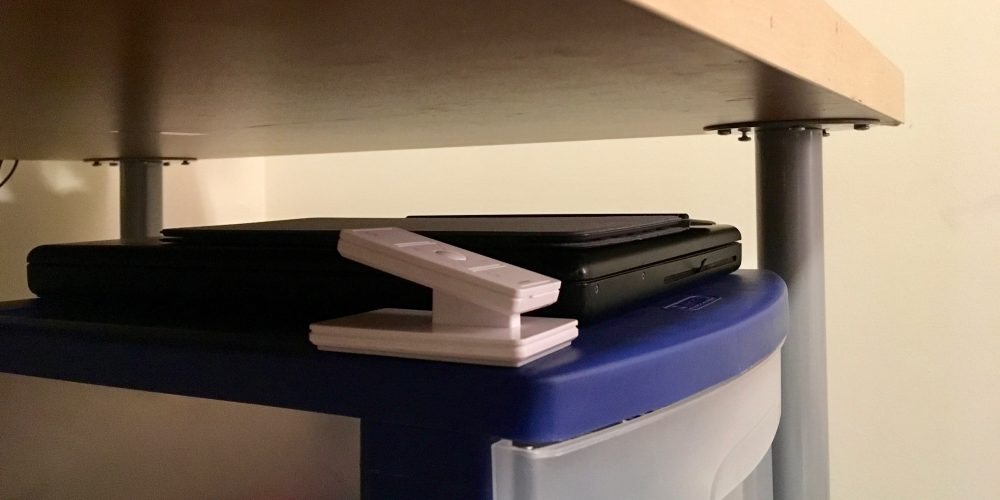 Lutron Caséta also includes a Pico Remote Control that works just like the in-wall light switch. These are great for nightstands especially in a kid’s room or in my case out of sight but in arm’s reach under my desk. Using the wall switch is just like using a traditional wall switch, Siri and the Home app are convenient in certain contexts, and the included remote is a neat add-on. 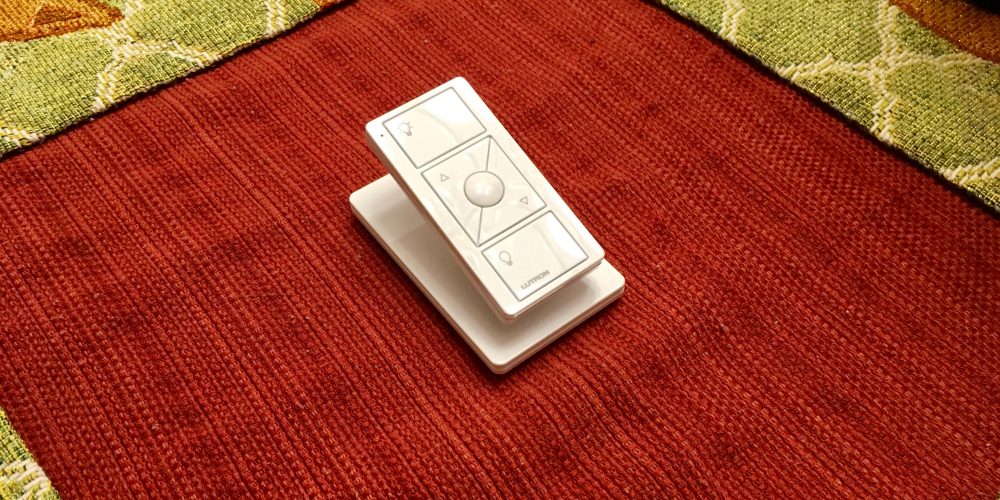 The dimmer kit I tested includes hardware for two rooms. I used the second wall switch in the kitchen where the overhead lights include five bulbs. The included remote is really nice if we sit down for breakfast and decide turning the light on would be nice, and my three-year-old can use it. You can also slide these off the stand if you want a more pocket-friendly remote. 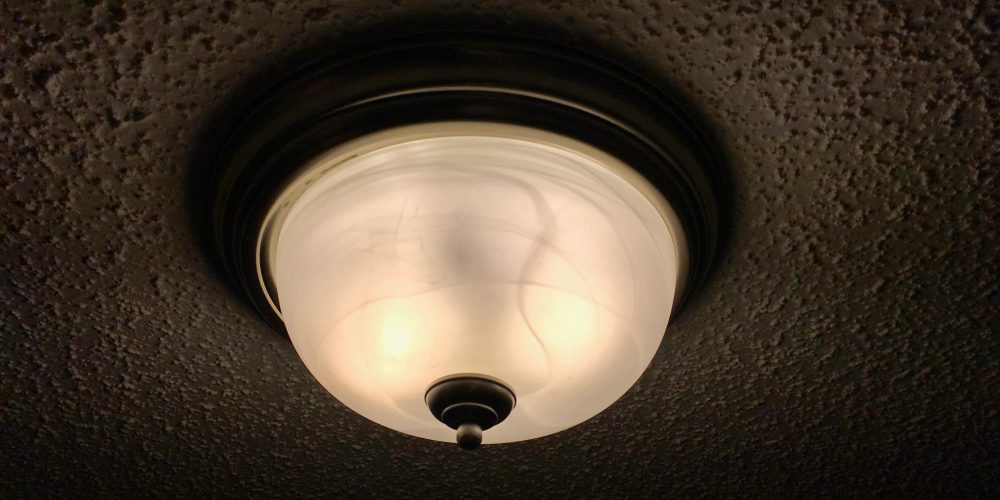 Back in the office, Lutron controls two overhead lightbulbs and grouping treats these as one. The light bulbs are basic ones that can be bought anywhere light bulbs are sold. A lot of hardware stores still don’t carry connected bulbs which can be inconvenient. 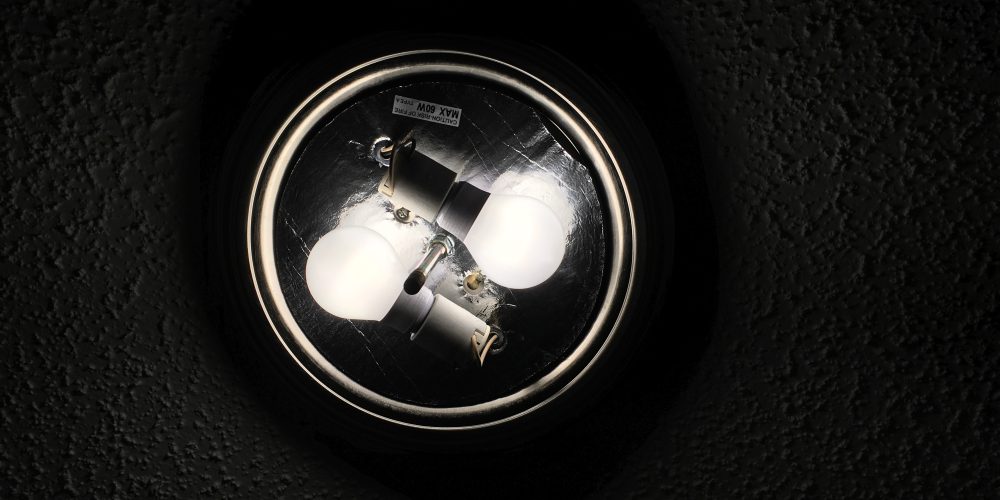 Even though you don’t need Wi-Fi connected bulbs, you still need to pay attention to which bulbs you buy when you use Lutron Caséta. Setting up Lutron required some research after the wall switch was in place because of buzzing that happens with certain bulbs. You’ll need LED dimmable bulbs for the best results and even then some bulbs work better than others. Lutron customers document their successes online and the company has a useful tool for picking the right bulbs.

I used Sylvania dimmable Ultra LED 60w replacement A19 (~$10) and heard little to no hum and full compatibility with dimming. Dimmable LED bulbs are recommended and incandescent bulbs (the outdated kind) and halogen bulbs work too. Spirally CFL bulbs are usually cheaper than LED bulbs but won’t work with Lutron. Tom’s Guide has a bulb explainer if you find yourself researching the topic; I’ve settled on LED bulbs throughout. 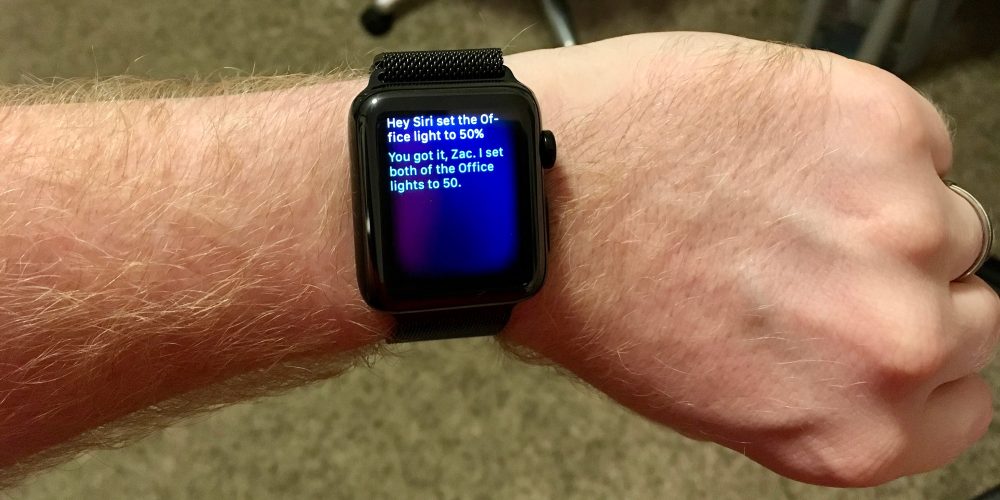 The one thing you miss out on with Lutron and using traditional bulbs is the ability to play with lighting colors. Philips Hue which also works with HomeKit uses their own bulbs with options for color changing lights. Colored bulbs are pricier however so in my own home, which has both Philips and Lutron in different rooms, I’ve opted for cheaper white bulbs when adding new Hue lights.

In terms of smarts, Lutron features a nicely designed app for the iPhone and Apple Watch. You need the iOS app to set up the bridge and add new accessories, then you can rely on Apple’s new Home app in iOS 10 to manage HomeKit settings and control your lights.

Voice control with Siri using phrases like “Siri, turn my office lights on” or “Set the office lights to 50% brightness” work just as you would expect, and you can create scenes and automations to make Lutron even smarter.

For example, my “I’m home” scene turns on the inside lights with a voice command or button tap (and you could optionally enable this with geofencing using your location) and “Good night” ensures all of the lights are turned off. Automation in the Home app for iOS 10 lets you use events like time of day and sunrise or sunset to control your lights too. The best alarm in the morning for me is bright lighting so I start my weekday with my house lighting up at 5 a.m. thanks to Lutron’s HomeKit connectivity.

Lutron Caseta Wireless Smart Lighting In-Wall Dimmer Kit with HomeKit support retails for $189.99 from Amazon, Best Buy, Apple, and other retailers. The LED bulbs that I used in my review are Sylvania dimmable Ultra LED 60w replacement A19 (~$10). You can also buy a Plug-In Lamp version of the same kit for the same price, and additional In-Wall Dimmers and Plug-In Lamp Dimmers retail for $59.99 and include Pico Remote Controls as well.

Here’s a visual demonstration of how on/off looks with Lutron Caséta: notice the nearly instant on then slow fade to off

My HomeKit setup includes both systems but I would recommend taking a serious look at Lutron Caséta if you’re just getting started. I’ll likely add at least two more In-Wall Dimmers to my bathrooms, for example, as the $60 light switches are $10 cheaper (and way more elegant) than three $15 bulbs and a $25 remote switch.

Which system is actually more cost-effective for you will depend on your own needs (and preferences), but on presentation alone Lutron Caséta is the clear winner and worth your consideration.