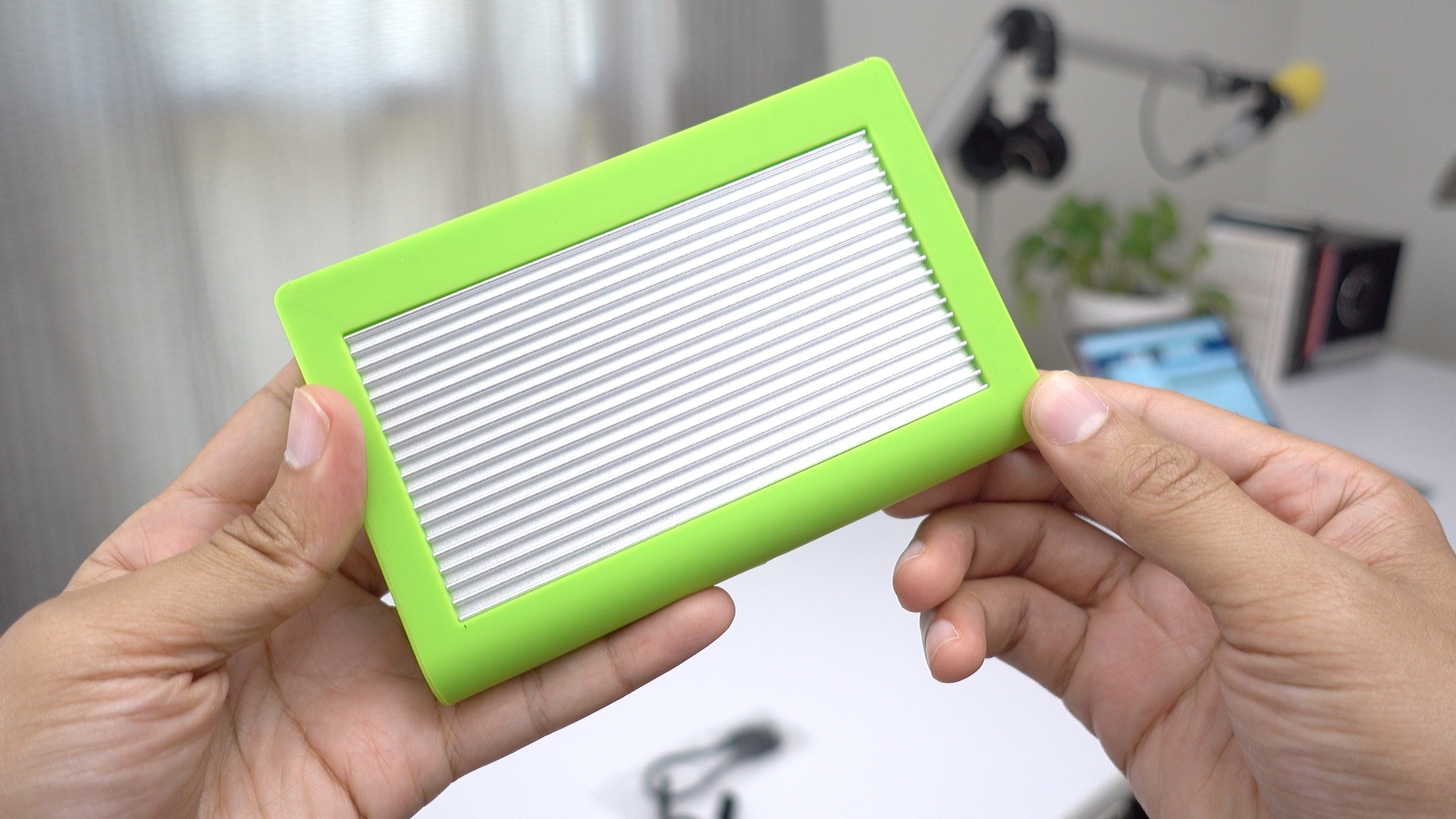 I’m always on the lookout for new USB-C-equipped MacBook accessories, especially external drives, because space is at such a premium on these diminutive machines. CalDigit’s Tuff line of 2.5-inch external USB-C portable drives fit the bill. Not only do these drives add a significant amount of space to your MacBook, but they’re bus-powered, meaning that you only need a single USB-C cable to enjoy its benefits.

CalDigit will ultimately produce two types of external drives in its rugged Tuff lineup. The upcoming SSD models, which max out at 450 MB/s on the latest MacBooks, will be the fastest of the two. But the spinning 7200 RPM hard drive-equipped models aren’t too shabby either, producing speeds that hover around ~125 MB/s in my QuickBench tests.

One of the best things about these drives is the fact that they’re future-proof. CalDigit has incorporated the USB 3.1 Gen 2 interface, which produces transfer speeds up to 10 Gb/s, ensuring that these drives can take advantage of future Mac hardware equipped with USB 3.1 Gen 2 support. The current MacBook models only support USB 3.1 Gen 1, which has an effective maximum throughput of 5 Gb/s.

For those of you opting for the 1 TB SSD-version, which will be launching later in the year, the wider throughput on future Macs will result in an actual speed increase from 450 MB/s to 550 MB/s. Spinning hard drive versions of the CalDigit Tuff already max out speed wise, because the 7200 RPM drive itself is the bottleneck, not the interface.

I’m a big fan of QuickBench when it comes to performing benchmark tests for HDDs and SSDs, and the CalDigit Tuff performed well across several different speed tests:

The CalDigit Tuff ships with a silicon protector in one of five fun colors, and is enclosed in a handy archive box. The archive box looks like one of those old video game cartridge cases that you’d find back in the 90’s at your local video rental store. The cases and silicon protectors, as CalDigit explains, are great for keeping different archived material organized. 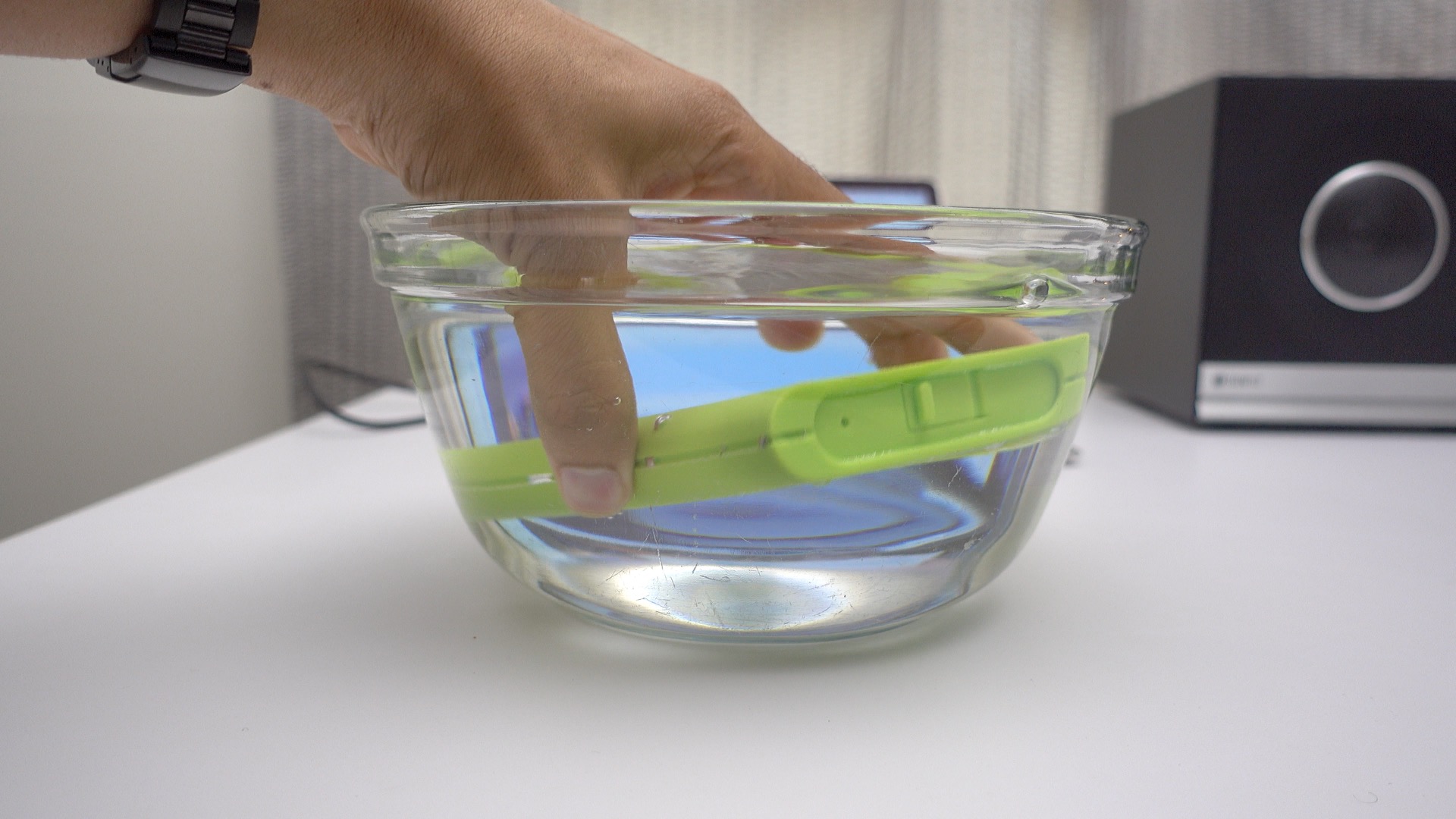 Of course, the silicon protector is present for more than just looks. It serves as a both a shock absorber and a water and dust dam that helps the drive meet its IP57 certification. IP57 provides limited dust protection, and means that the Tuff can withstand water immersion for up to 30 minutes in up to 1 meter of water.

The Tuff can therefore withstand the rigors associated with traveling with your MacBook. If you drop it, or expose it to harsh environments, it’s going to do a much better job of keeping your data safe than the average external drive will.

The most important thing about the CalDigit Tuff in my personal workflow is convenience. It’s bus-powered, which means I can just plug in the included ThunderBolt 3 cable, which is compatible with USB 3.1, and I’m ready to start working. Speed is also important, and while the hard drive-equipped version I tested pales in comparison to the speeds afforded by a solid state drive, it was fast enough to handle my Final Cut Pro X video editing workflow. I actually edited this very video on the Tuff drive. 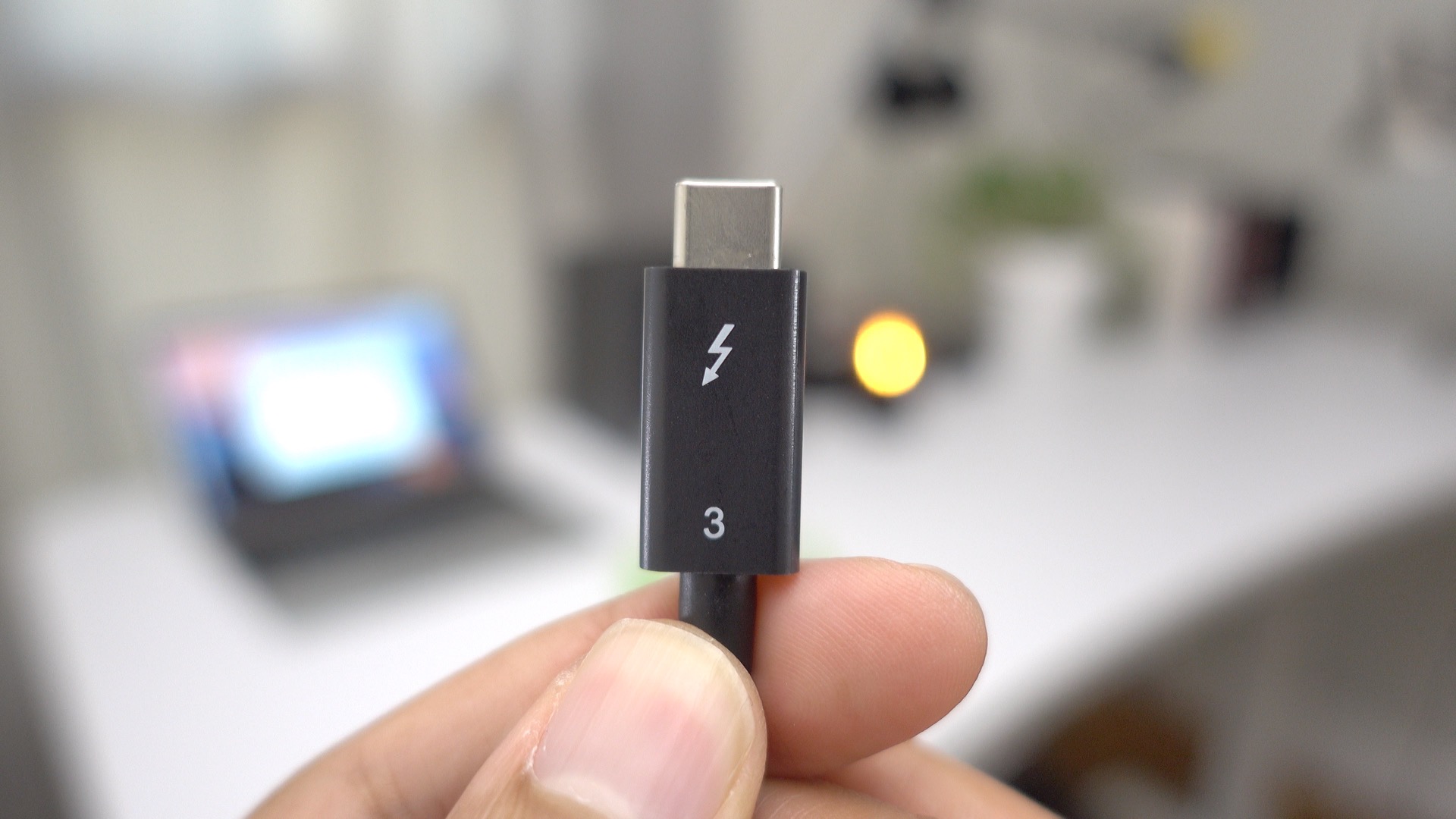 The fact that the CalDigit Tuff is set to work with USB 3.1 Gen 2 is just icing on the cake. Granted, I won’t see any benefits on the hard drive version of the Tuff, but those who opt for the upcoming SSD version will get a nice surprise, if we make the solid assumption that the new MacBooks will ship with ThunderBolt 3 support in tow. 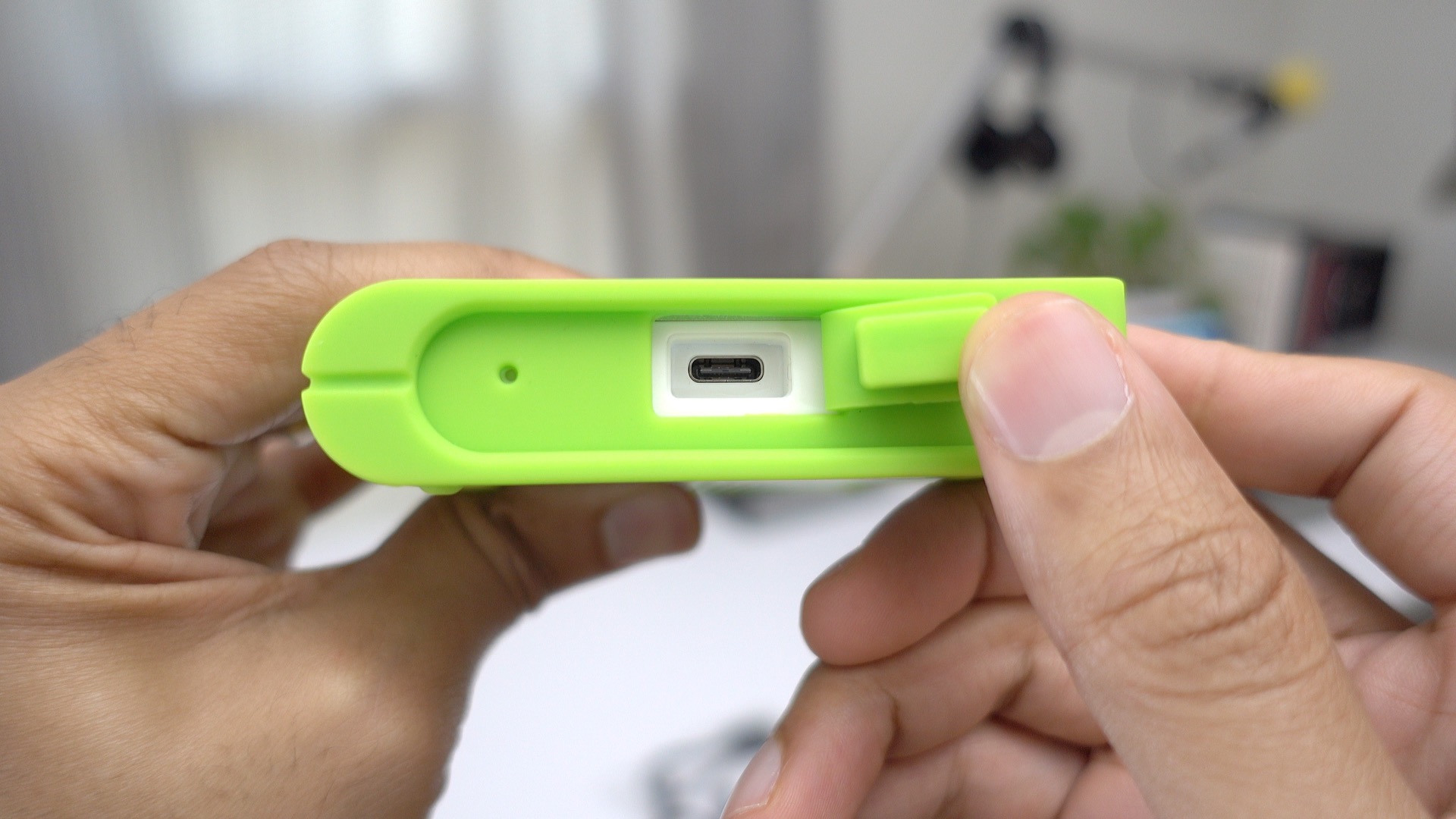 The silicon protector is there for more than just looks, it’s a shock protector and water/dust protector

The Tuff drive is nice and quiet when data is being transferred, and features an LED status indicator that isn’t overly bright so as to serve as a distraction. CalDigit also includes a USB-C to USB-A cable for legacy connections to older hardware, and while it’s pre-formatted for Macs, the drive can be used with Windows machines with a little massaging.

I’ve tried several different USB-C enabled hard drives with my MacBook, such as G-Technology’s G Drive, but the CalDigit Tuff is my favorite MacBook external drive thus far. It features a rugged design that can stand up to dust and spills, comes with a silicon protector in a variety of colors, is bus-powered, and SSD models will feature even faster transfer speeds on future hardware. There’s also that handy archive case that the unit ships in, which is great for stowing the Tuff drive along with its included cables. 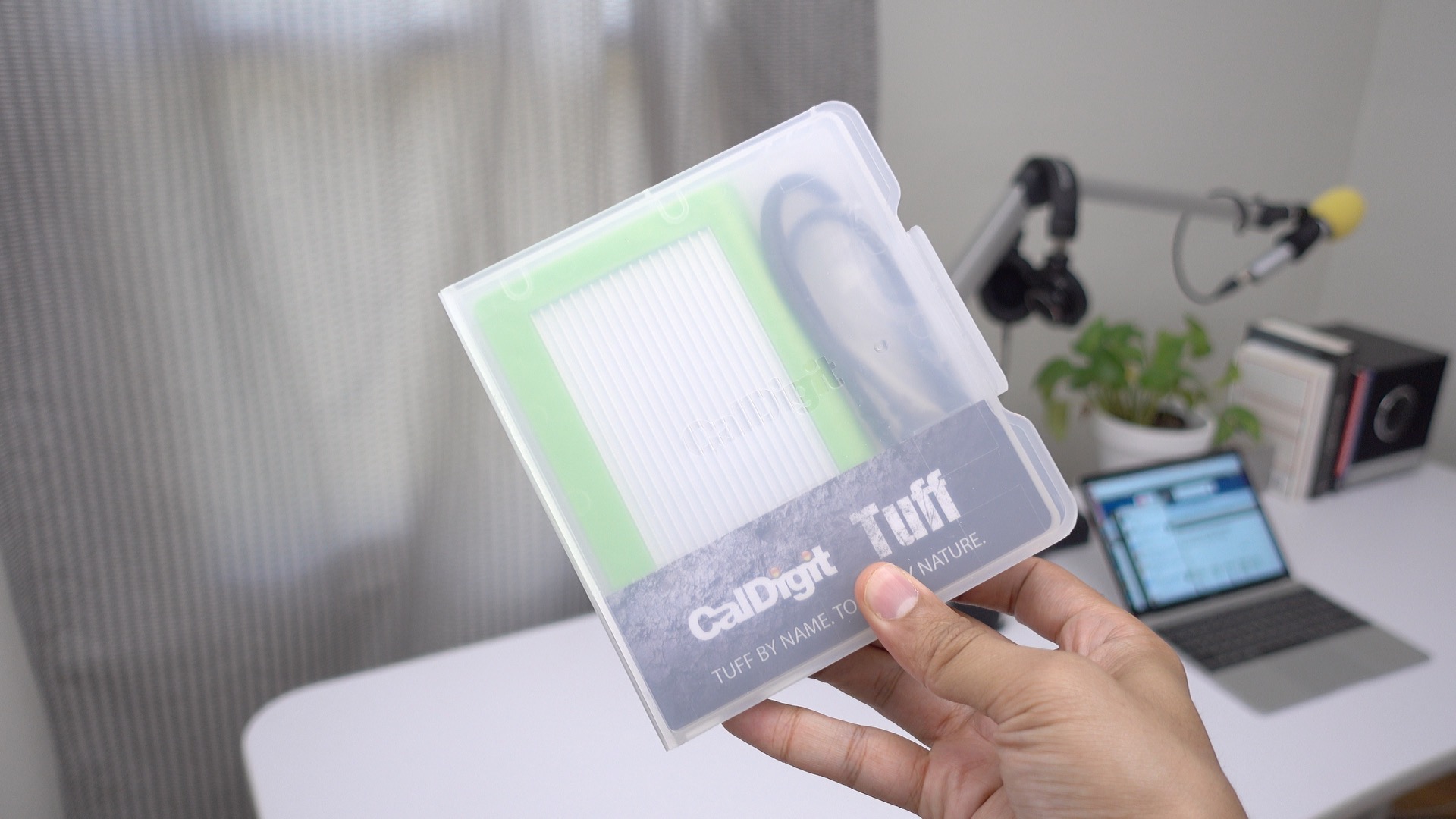 If there’s one complaint to be had about these drives, it’s that it ships with a cable that some may feel is way too short. Personally speaking, I like having a short cable, because my external drive is always right next to my machine, but I can definitely see how some people would prefer a longer cable. At around $179, CalDigit’s Tuff portable drive isn’t cheap, but from my hands-on experience, I can confirm that it makes for a solid MacBook companion.