Review: Can the Erato Apollo 7 fill the wireless earbud void before Apple’s AirPods? 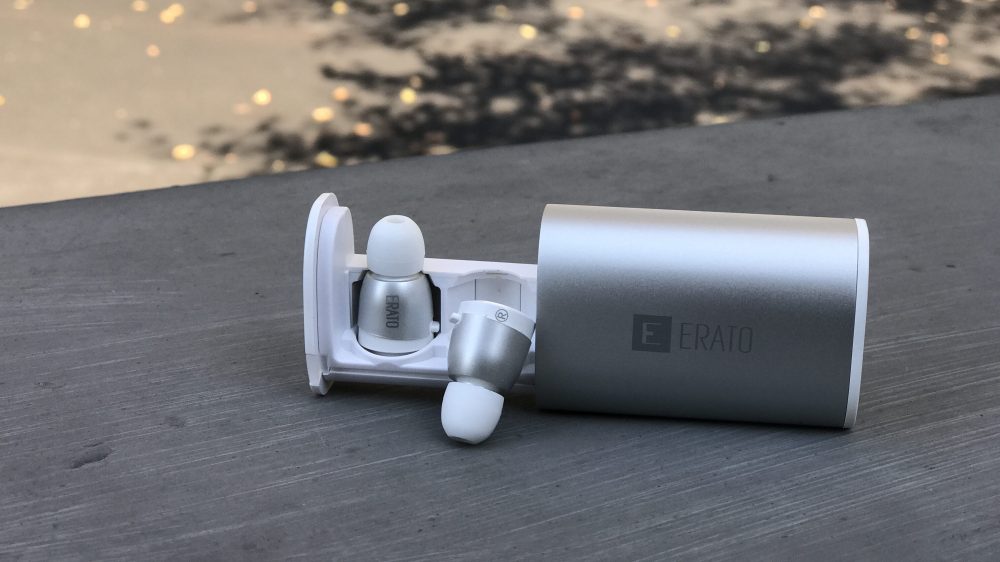 I discovered the Erato Apollo 7 a few months ago during its Kickstarter campaign and nearly immediately knew it would be a pair of earbuds that could fit into my life nicely. It really looked like the first pair of true wireless earbuds that included all the functionality I wanted, without sacrificing any distinct feature. With the AirPods being delayed potentially as far out as January, is there a possibility that the Erato Apollo 7 ($299) is ready to fill the void that Apple left with the iPhone 7?

When I first picked up the Apollo 7s charging case, I felt as though I was holding a futuristic version of a contact lens case, or a compact eye-glasses case. It’s a small, smooth, and tough package that feels solid in the hand all the way around. It’s got a firm weight to it that includes a slide out tray where the earbuds sit in to charge. 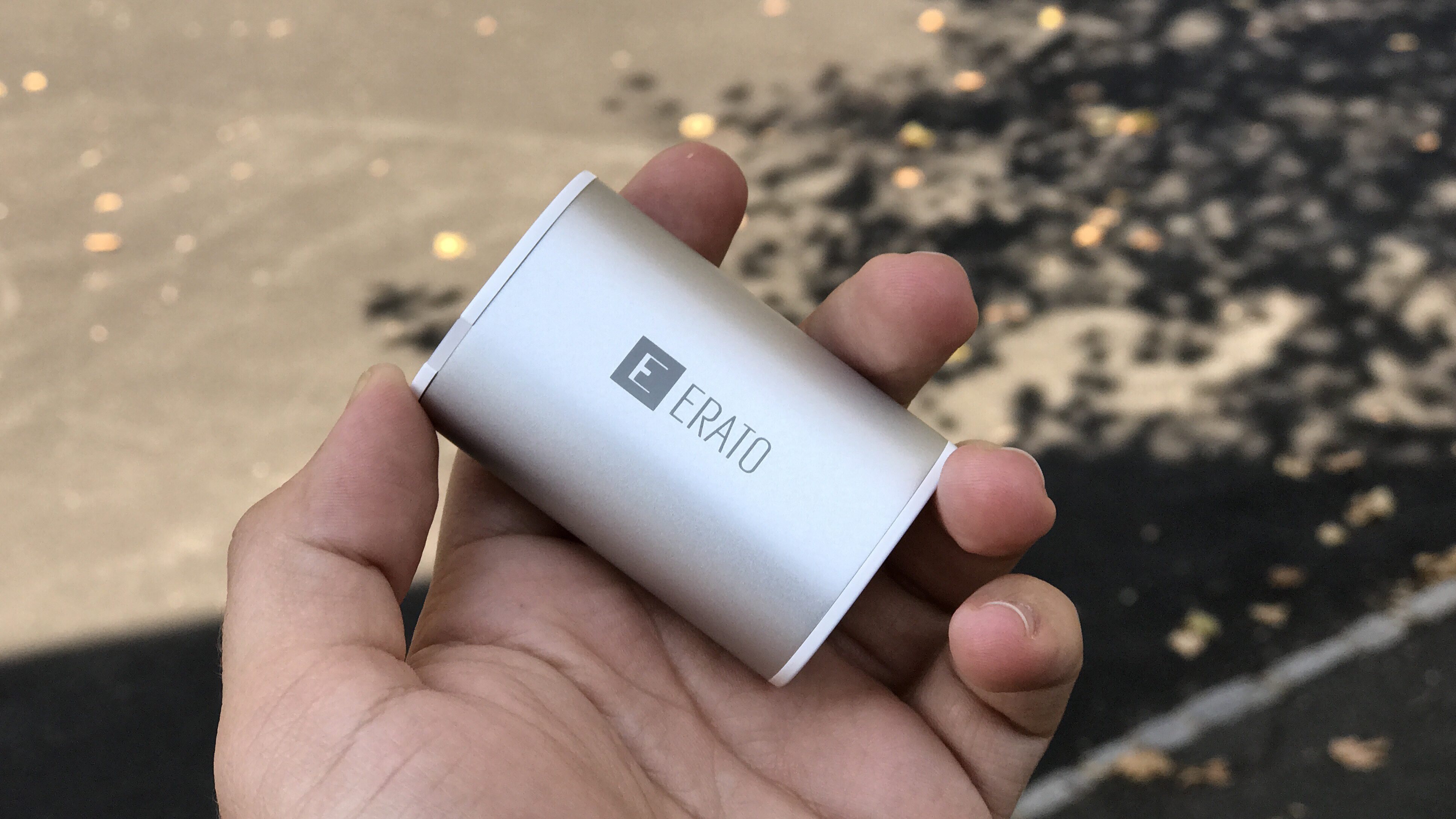 Placing the earbuds into the charging tray feels much simpler and more secure than Earin’s own as each piece lodges into place when charging. The individual earbuds have a charging LED to help indicate when each earbud is charging and an external LED on the case itself to show the same.

The charging LEDs on the Erato case are an unobtrusive soft white that simply turn off when the case and buds are fully charged. I’m not a fan of large colorful LEDs on tech products and Erato hit the nail on the head in terms of balance here.

The Apollo 7 earbuds have a dichromatic design, one color for the main body of the earbud, and another one that surrounds the charging contact point and control. Looking at them today I still can’t quite tell how I feel about the design choice. It could be choice of using two colors, or just the paint on the earbuds themselves, but sometimes they just appear…cheap. I think I may have preferred a pair of earbuds that had an all around consistent color.

I do like the torpedo style design, akin to what Earin did with their earbuds. The blinking LED on the earbud is very welcome too as it becomes obvious when the earbud is running out of battery, and whether or not it’s charging once placed in the case. 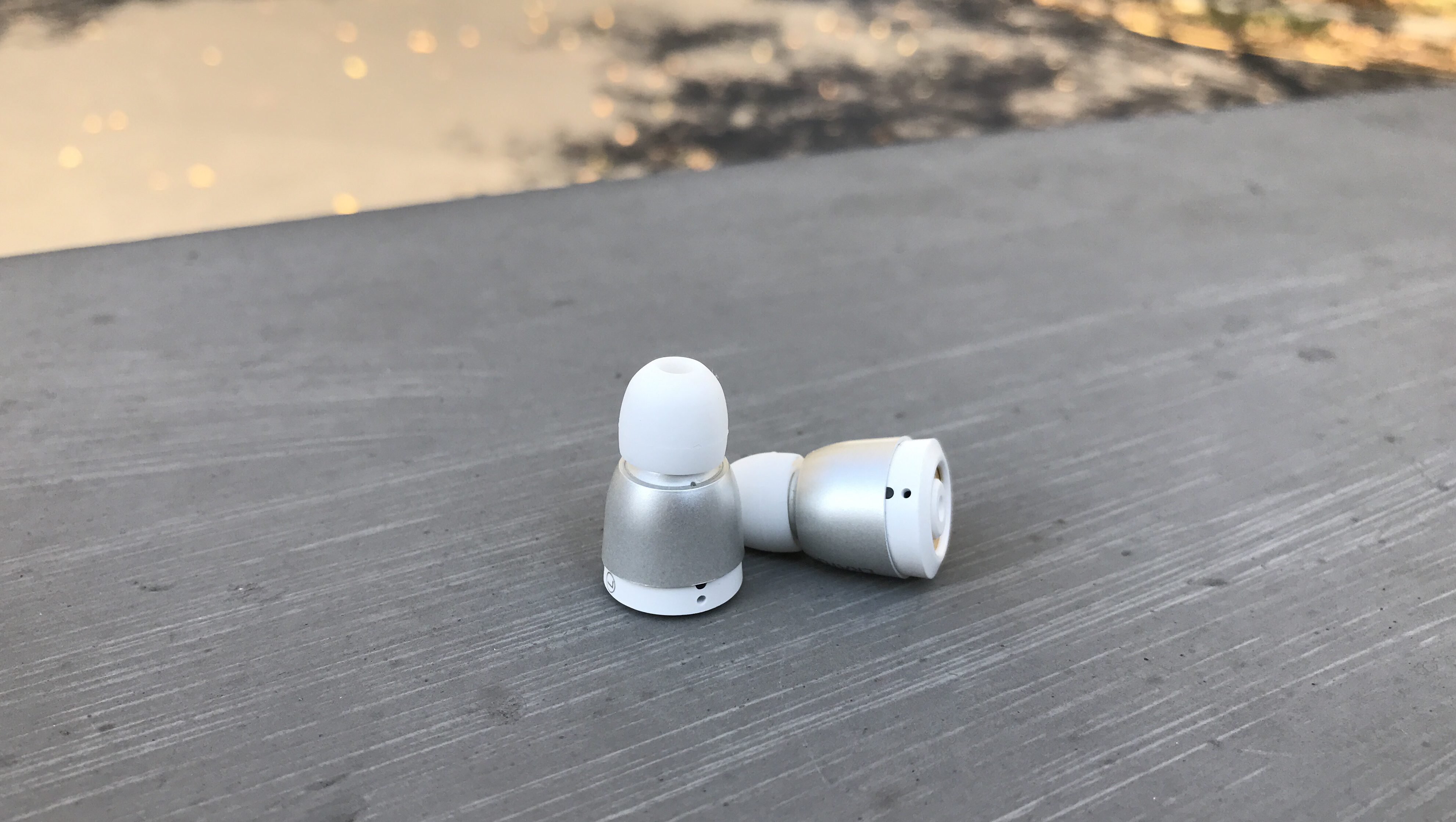 The button control on the Erato is my favorite part of the earpieces. When not in the ear, the control is an obvious, click-centric button. It presses nicely and sounds great in the ear without producing an annoyingly loud pop every time it’s pressed. Having the ability to control my audio and have feedback that I actually pressed the button is very welcoming.

The earbuds come with a pack of different ear tips and this time around I decided to stick with the smallest Comply foam earbud tips. I found myself liking them substantially more than I thought I would have. Although the Earin included Comply ear tips, I couldn’t quite ever get them to sit in my ear properly. I have to think the difference here is because the Erato Apollo 7’s ear tips design juts straight out versus resting at an angle away from the earbud.

I did notice that after about a week of using these every single day my left ear started to experience some pain along the ear canal and some overall sensitive hearing to sounds. I still haven’t quite settled on whether this is my fault by not allowing my ears to relax after having music blasted into them near millimeters away all day, or that the Apollo 7 earbuds go pretty far into the canal to get a secure hold.

As soon as I hit play on the Apollo 7 earbuds I knew these would be new everyday wireless buds. All the audio quality issues I had with my Earin and Syllable true wireless earbuds didn’t remotely exist here. The sound was loud, clear, and balanced. While I wanted a bit more kick out of the bass, I was more than happy with the overall audio.

On the Earin earbuds I got accustomed to only listening to podcasts as my ears seemed to favor that during the testing. With the Erato Apollo 7 I was ready and able to enjoy all audio content formats and still have a good auditory experience. Podcast voices came in nicely balanced without any pains of high treble, and bass heavy music never muddled the experience.

All in all, I found the Erato’s audio quality easily surpassing my expectations and other true wireless earbuds I’ve been testing. Though the sound can’t compete with headphones that have larger audio drivers, for the size they were they held their own.

Where it did suffer was in phone calls. I found that more than 90% of the time others couldn’t hear me at all, causing me to switch to the iPhone’s microphone during the call. While not too inconvenient, it was definitely a bit annoying to be able to answer from the earbuds but not have anyone hear me. Strangely enough the microphone on the earbuds was just good enough that Siri could understand my requests.

The most impressive part of Erato’s Apollo 7, has to have been the fact that it so rarely disconnected. Across all the true wireless earbuds I had tested, every single one faced a variation on disconnection issues. The Erato Apollo 7 earbuds stayed connected to one another and to my devices without failing me whenever I needed it.

In the moments it did disconnect from my iPhone I would have to reconnect them through Settings, but the earbuds themselves never disconnected from one another. Gone were the issues I had where music in one earbud would get out of sync from the other, or then eventually play at slight delays.

Erato’s specs list the Apollo 7 as having three hours of continuous play time, and four hours of talk time. Based on the play time estimates alone I would say it was accurate. I found myself streaming music and playing for a little over three hours and whenever it died I would just drop them into the charging case that came with them. I used the charging case multiple times over the day and it was more than adequate in getting what I needed done.

Although the Erato Apollo 7 doesn’t have a quick charge functionality in the way the Apple AirPods have stated (15 minutes equaling three hours of battery life), it was never a terrible experience having to slide them into the charging tray.

The Erato Apollo 7 includes audible voice prompts while powering on the device, when it pairs to the opposite earbud, and when it pairs with the phone. Not loud or annoying at all, the voice prompts are a welcome addition in letting me know that everything is about to work as well as it should.

The Apollo 7 is also waterproof, something I didn’t even realize could be important until on my second day of owning the pair they fell into my dog’s water bowl. Following the instructions in the guide, I left the earbuds out for 24 hours without touching them. After the 24 hours were up, I picked them up and went right back to playing them as good as day one.

It’s impossible to review true wireless earbuds nowadays without thinking of what Apple’s AirPods could even be like. The Apollo 7 and AirPods share a lot of similarities with the ability to control audio from the earbuds themselves to the charging case. Based on what we’ve seen with the AirPods though, I truly believe the Erato Apollo 7 holds a candle to Apple’s (yet to be released) AirPods.

In features and usage alone I rank it high, but it will definitely have to find a way to compete or turn over Apple customers because the $299 price point for the Apollo 7 is hard to swallow.

The Erato Apollo 7 retails at $299 on Amazon or on Erato’s official site. It is available in Silver, Grey, Gold, or Rose Gold.

Got any other questions on the Apollo 7? Let me know in the comments below, and I’ll answer each one!