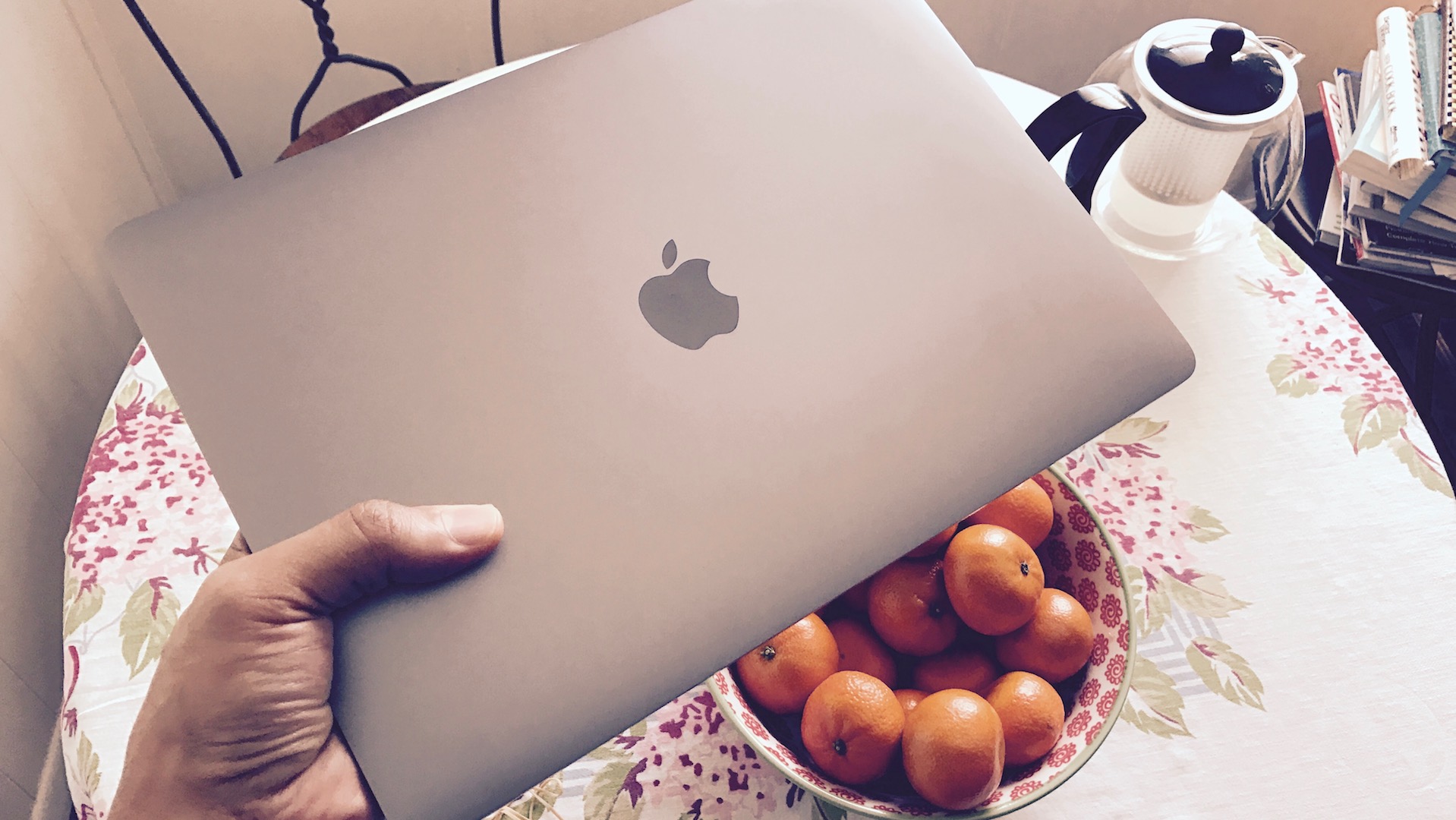 I’m still putting the (new) Late 2016 MacBook Pro (without the Touch Bar) through a variety of tests, but I just had to point out this SSD benchmark test that I ran using my favorite disk benchmarking utility, QuickBench. The results show, as Apple has claimed, that the SSD inside this machine is crazy fast.

As our own Ben Lovejoy noted in an earlier post, the Late 2016 15″ MacBook Pro appears to have the fastest SSD in a production laptop machine. While that may be true, that doesn’t mean the 13″ low-end version of the new MacBook Pro is slow.

The low-end 2016 MacBook Pro might not be as fast from a processing or graphics perspective, but when it comes to disk I/O, this thing flies. Here is a benchmark taken from QuickBench showcasing both read and write speeds for the 256 GB PCIe SSD inside. 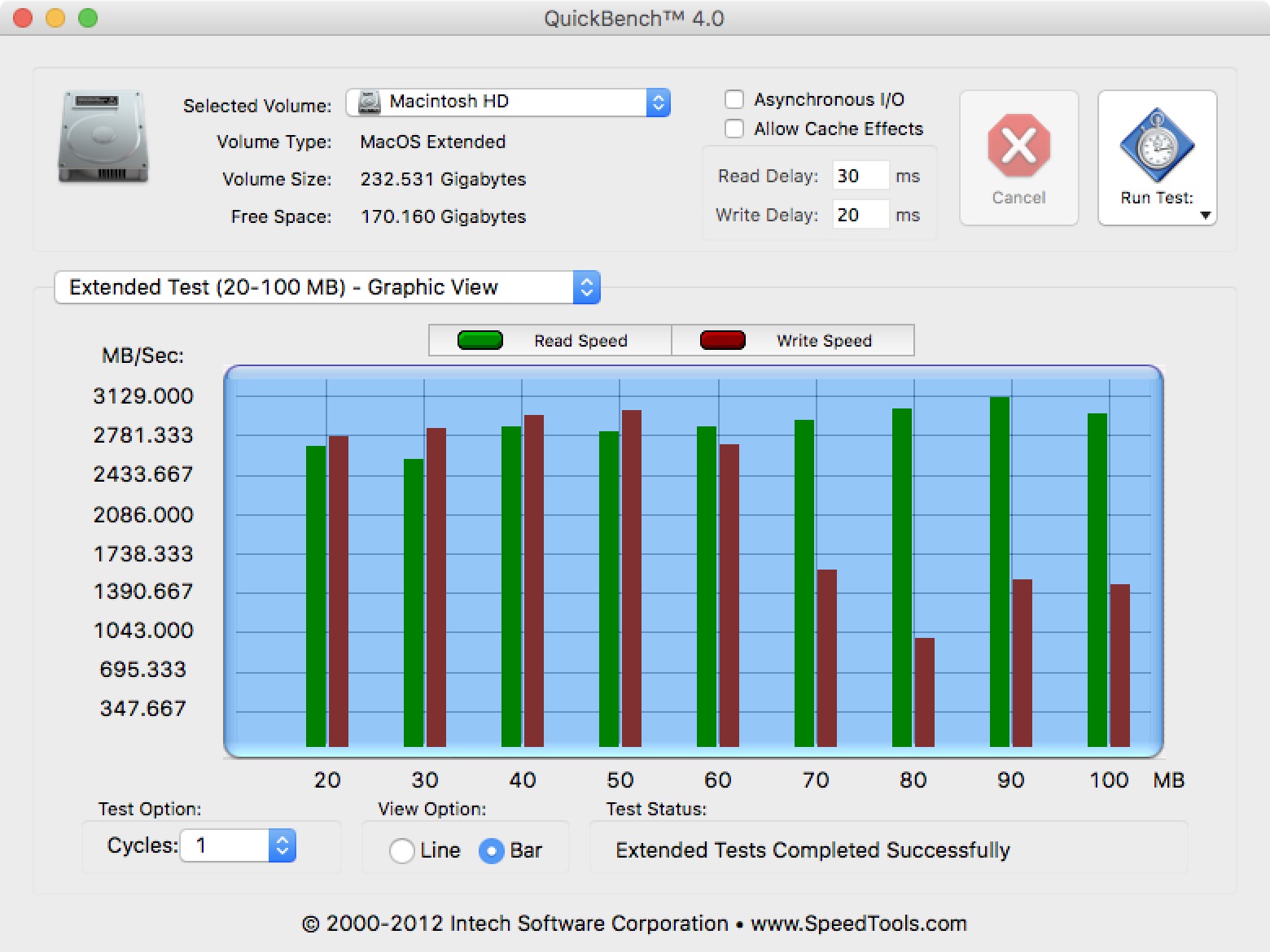 Remember, Apple is claiming read speeds up to 3.1 GB/s for both the 13″ and 15″ MacBook Pro, and 2.1 GB/s write speed. A quick look at the QuickBench test shows that the hardware performs right in step (divide by 1,000) with these expectations.

For comparison, here is my Early 2016 MacBook (12″), which was released earlier this year: 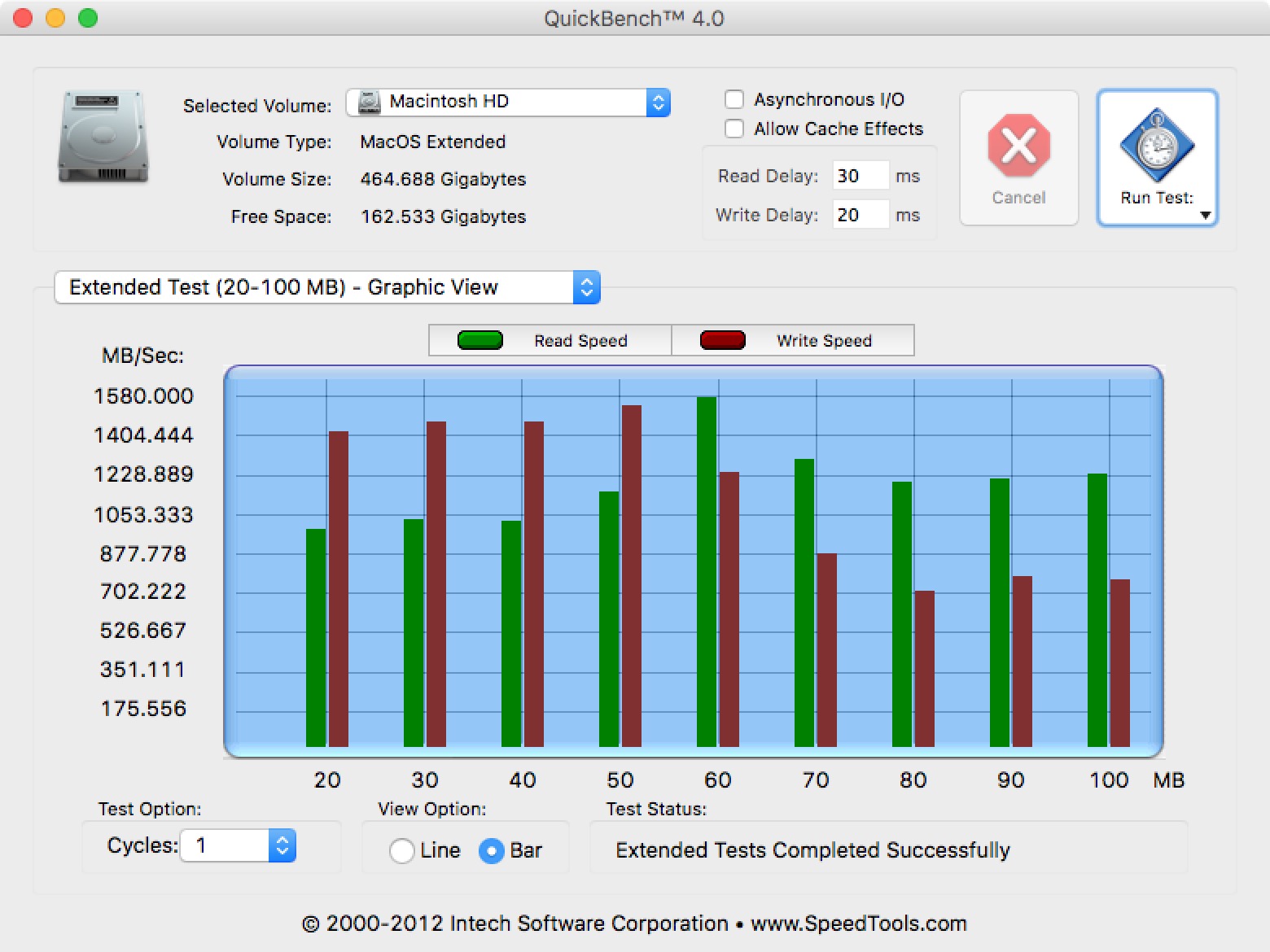 As you can see, that’s a significant difference in both read and write speeds. But just to be sure, I decided to run a similar test using Blackmagic’s Disk Speed Test. 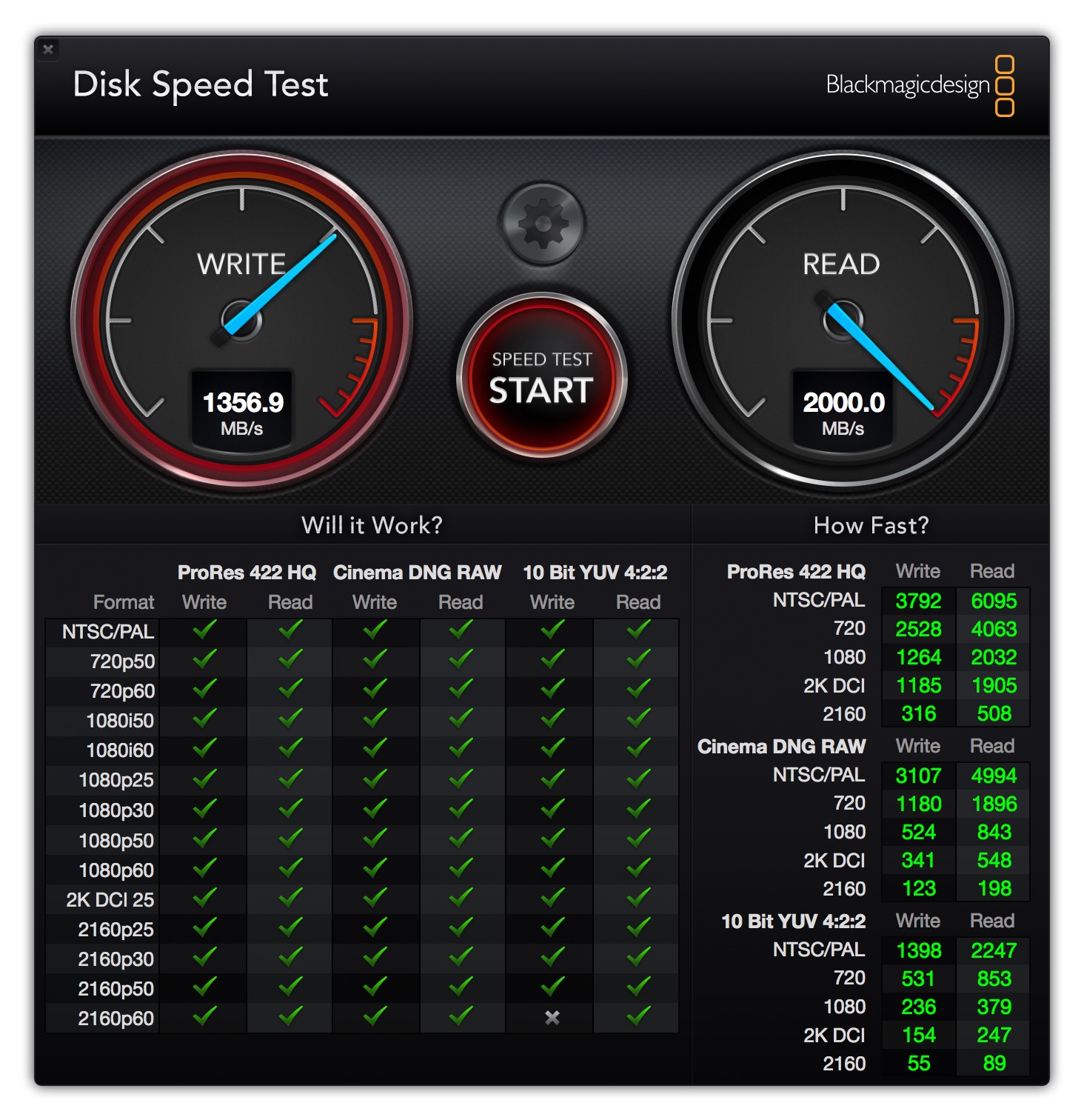 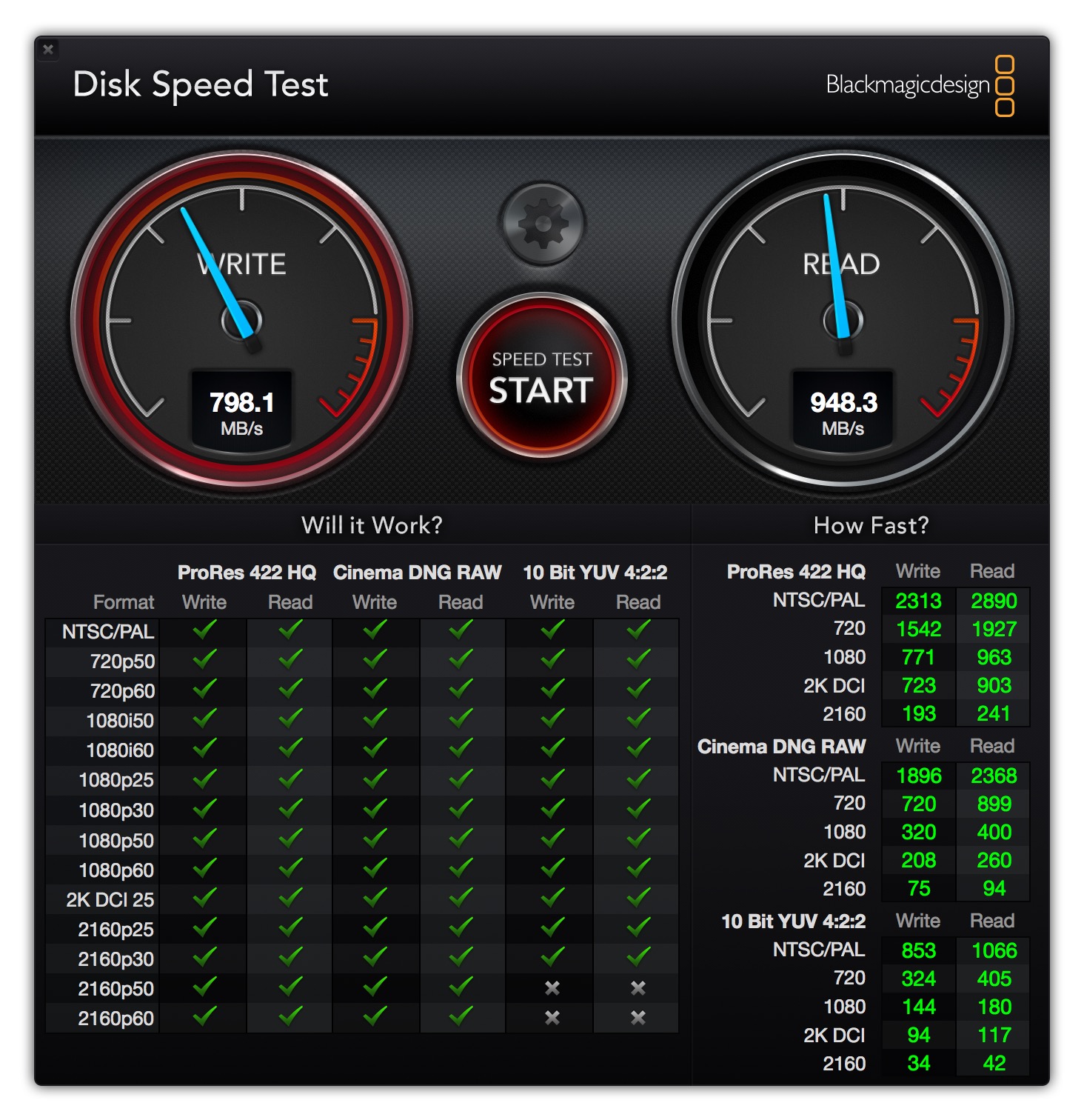 Blackmagic’s speed test appears to max at 2,000 MB/s for read speeds. As you can see, the Late 2016 MacBook Pro eclipses this reading, causing the test to peg out at 2,000 MB/s or 2 GB/s. Needless to say, the SSD in the new MacBook Pros are very fast. It’s just another reason to consider the entry-level 13″ MacBook Pro over the 12″ MacBook.

As a side note, it’s also worth pointing out that the 2016 MacBook Pro features a removable SSD powered by a custom Apple controller. That means that these machines feature storage units that are potentially upgradable in the future.

We’ll have more about the new MacBook Pro in the days to come. In the meantime, please share your thoughts on the disk I/O speed, and the potential for future disk upgrades.