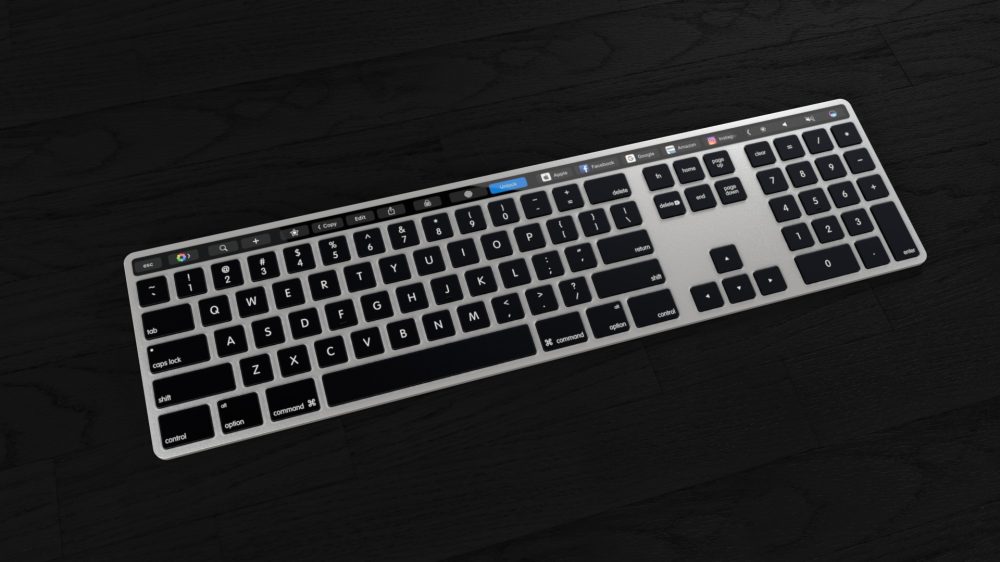 One big question people have been asking since Apple’s announcement of the Touch Bar is if the technology could come to the standalone Magic Keyboard. My colleague Ben Lovejoy noted of the possibility earlier this week, explaining that battery life and price would be to inhibiting  factors for the Magic Keyboard with Touch Bar to come to fruition.

Those factors haven’t stopped some eager designers from creating some pretty convincing mockups, though…

An eager Reddit user under the name Hazza42 shared some pretty convincing looking renders of a Magic Keyboard with Touch Bar. The renders depict a design similar to that of the current Magic Keyboard, but with a color that’s somewhere in-between silver and space gray and with black keys.

Up at the top, of course, is the OLED Touch Bar. The darker aluminum color and black keys look much better next to the Touch Bar than white keys would, like what’s currently used on the Magic Keyboard.

On the back of the keyboard is a Lightning connector for quick charging. Currently, Magic Keyboard users can go weeks at a time without charging, but battery life would almost certainly be compromised with the inclusion of a Touch Bar.

What’s also notable about these renders is that there’s an integrated number pad on the right hand side, something that Apple ditched with its wireless keyboards. Presumably, bringing back the number pad would allow for a bigger footprint, thus allowing for a bigger battery to help combat the battery drain from the Touch Bar.

Our poll from earlier this week showed that while many would be interested in a Magic Keyboard with Touch Bar, a price tag as high as $199 would scare many buyers away. It’s possible that Apple could introduce a Magic Keyboard with Touch Bar alongside refreshed iMacs, Mac Pros, and Mac minis, but until then it’s fun to imagine. Check out a couple more renders below and let us know what you think in the comments.