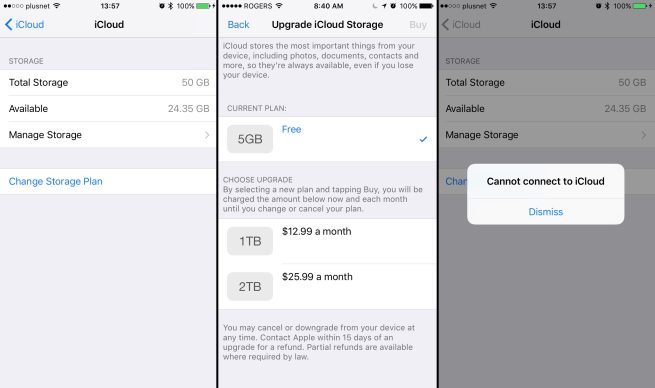 Update: Apple appears to have fixed the issues; the page is now accessible as normal. There are no changes to iCloud tiers or prices. Original story below.

For other iCloud accounts, the storage settings panel simply doesn’t load at all, instead displaying an error. Apple has not announced any changes to iCloud storage tiers, so this is most likely a server-side bug …

You can check the status yourself by launching System Preferences on Mac or Settings on iOS.

Then, go into the iCloud storage screen and tap Change Storage Plan (on macOS, this is a button labelled ‘Buy More Storage’). Let us know in the comments what storage tiers you see on offer — or if you simply get an error message.

The error messages and missing storage tiers have been observed on both iOS and macOS. The macOS error is particularly impeding, as System Preferences needs to be Force Quit to close it if the Buy More Storage action fails.

Based on testing by the 9to5Mac staff, it appears that users currently on the 5 GB free iCloud tier are able to see the (limited) upgrade options. Users currently subscribed to the 50 GB iCloud or 200 GB iCloud plan see the error message.

To confuse matters further, it appears some subset of affected iCloud users have received emails from Apple informing them that their 50 GB or 200 GB plan has been discontinued. A similar error also appears to be affecting Apple Music subscriptions.

Whilst this may indicate that Apple is changing up the iCloud pricing tiers imminently, the most likely interpretation is that this is a mere bug with Apple’s iCloud servers and that normal service should resume in the next few hours. Apple’s support documentation has not been updated to reflect any changes to the available iCloud tiers.

That being said, Apple’s system status page is not yet reporting any official downtime for iCloud. We’ll update the post if the company clarifies what is going on. Apple last changed iCloud storage plans in 2015.