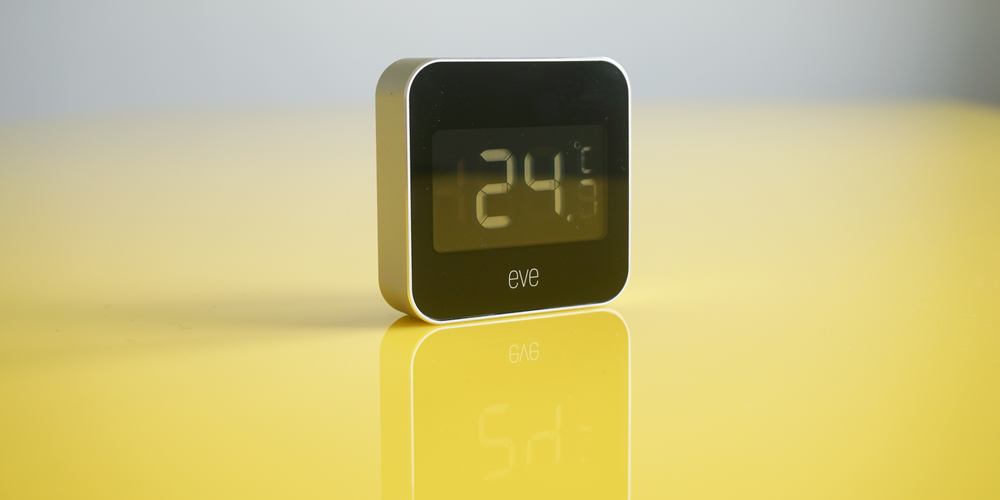 One of my complaints about HomeKit devices is that too many of them look like what father-of-the-iPod Tony Fadell once described as ‘ugly white plastic crap.’ My Philips Hue switches and motion sensors, for example, work well, but they are undoubtedly both white and plastic – and while I wouldn’t go so far as to call them ugly, they are certainly not beautiful.

This is an issue Elgato’s latest HomeKit offering aims to address. The Eve Degree is a standalone room thermometer capable of measuring both temperature and humidity, reporting it back to your iPhone.

With an anodized aluminum surround and black front, it aims to look rather more Apple-like than your average HomeKit accessory …

The Elgato Eve Degree measures 54 x 54 x 15mm/2.1 x 2.1 x 0.6in. It’s something you could happily hang on the wall in most contemporary settings without looking out of place. It looks smart, modern and understated. The display is relatively subtle but easy enough to read.

Some commenters yesterday criticized the prominent ‘eve’ branding on the front. I’m not a great logo fan, preferring these to be discreet, and yes, if I could have the device without the branding, I would. But I don’t think it’s as big an issue as some imagine. The typeface has a light weight and really doesn’t stand out as much as it appears to in photos.

That said, I did notice one issue: the aluminum scuffs easily. Now, it’s fair to say that reviewers use kit a little differently to the average person. Most people are going to take it out of the box, add it to HomeKit, hang it on the wall and be done. While reviewers tend to play with the things on our desks, move them around for photos and so on. So this may not be an issue in real life, but it’s worth mentioning.

While Degree measures both temperature and humidity, only one or the other is shown on the LCD display – you can choose between the two by pressing a button on the back, but you need to use the Home or Eve app to see both. Elgato tells me its expectation is that people would normally use the app.

It could be argued that the display is therefore redundant, but that’s techie thinking: normal people in the home would probably glance at the device itself rather than open an app.

The operating range of -18C/0F to 55C/130F and 0-100% humidity ought to satisfy most locations, but the device does have a few constraints.

First, water resistance is only rated to IPX3, which is a test of spraying the device with water for two batches of five minutes from different angles. It’s a reasonably robust standard, but falls short of guaranteeing that it would remain operational in driving rain over an extended period of time. I’d think of this as a device for indoors or somewhat sheltered outdoor locations.

Second, it’s Bluetooth only, not WiFi. This limits the range over which you can obtain remote readings, especially through walls. That said, I did successfully get readings from my upstairs office at one end of the house to my downstairs living room at the opposite end. But YMMV depending on the size and construction of your home.

Third, it’s non-rechargeable. Elgato says the CR2450 battery should last around a year, but it’s still a hassle (and slight expense) to change that annually.

I generally talk price at the end of a review, but I think it needs to be mentioned here as we discuss how you might use the device.

As a passive measurement device, just letting you know temperature and humidity out of interest, it’s pretty pricey at $69.95. Unless you have good reason to want to measure the temperature remotely, it would be very hard to justify the cost when you can easily buy a dumb room thermometer and humidity sensor for less than $10.

Sure, the Degree will provide graphs on your iPhone of temperature across time, which may be helpful in deciding whether your heating or cooling system is doing the job, but some of today’s dumb-ish devices do the same thing on their own displays.

Where a smart thermometer makes more sense is creating HomeKit rules based on either temperature or humidity. For example, you might switch on a ceiling fan if the temperature got too high, or turn on a dehumidifier if the humidity rose beyond a certain point. This is something your ten buck device can’t do.

Coupled with an Elgato Eve Energy switch, you could switch on any device plugged into it. You would, of course, have to make sure that simply supplying power to it is enough to switch it on. An obvious application would be an air-conditioner, for example, but many require a button to be pressed after power is supplied.

So these, I think, are the two questions you need to ask yourself. Do you have a need to control a device based on the Degree’s readings, and can your device be operated just by having its power turned on? If so, the Degree gives you a neat way to do it. If not, it’s a pretty expensive wall-mounted thermometer.

The Elgato Eve Degree costs $69.95, and is available now for preorder, shipping on June 6. Check out our earlier review of the Elgato Eve Motion standalone HomeKit-compatible motion sensor.