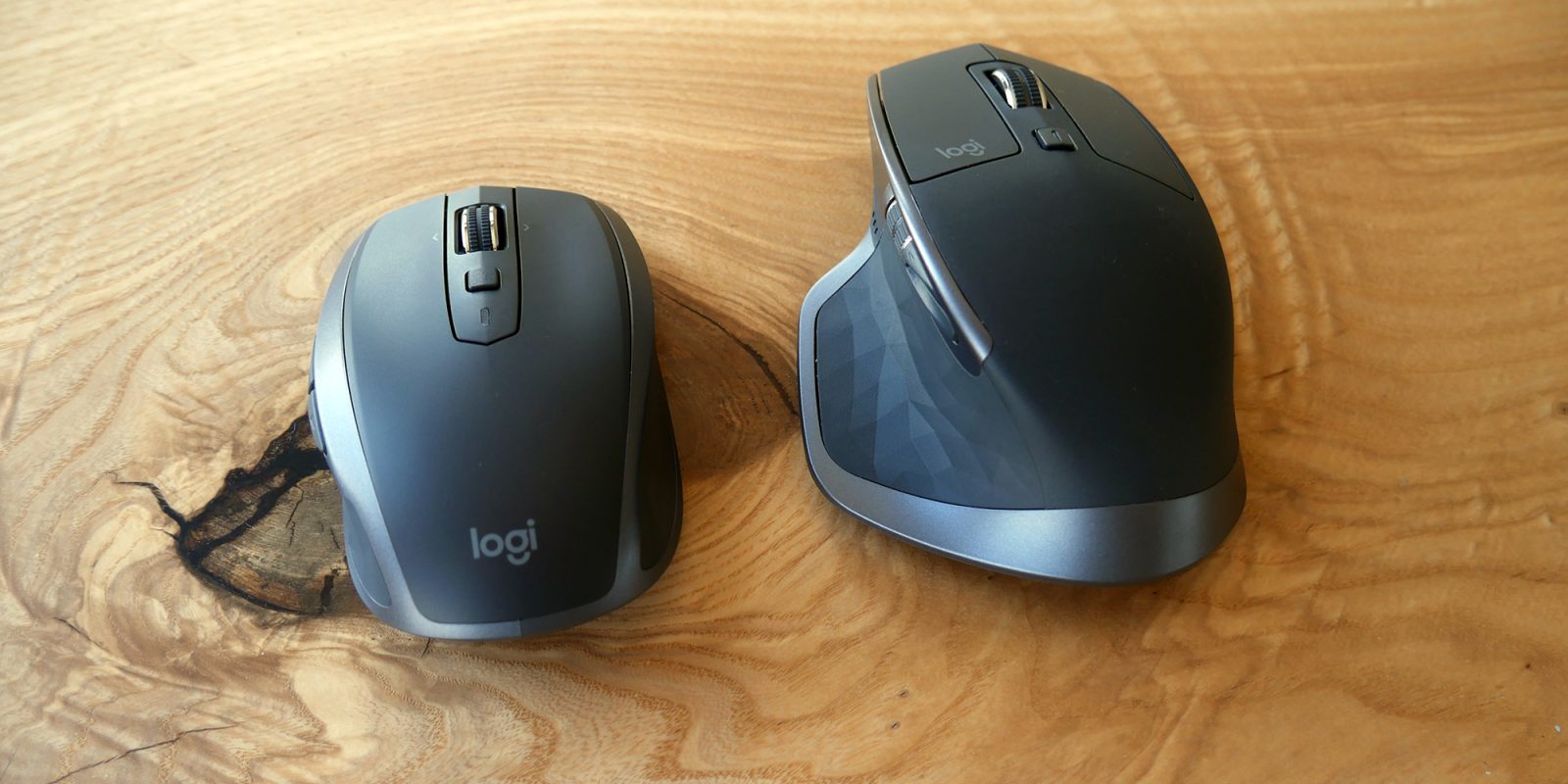 Logitech has today announced the latest generation of its popular MX Master mice alongside an intriguing software feature called Flow. The MX Master and Anywhere 2S introduce a handful of hardware upgrades in a familiar package.

I was a huge fan of the previous generation models, so I was anxious to go hands-on with the latest rendition. Over the last few weeks, I’ve been able to spend some time using both new models and the Flow feature as a part of my daily routine. Full details on both devices as well as my thoughts on each can be found below.

Out of the box, there’s very little physical difference between today’s Master releases and the previous generation. Both models feature an upgraded version of Logitech’s Darkfield High Precision tracking that is designed for use on just about any surface. Bumping the resolution to 4,000 DPI promises “flawless control” according to the manufacturer.

Logitech is also promising 70-days of battery life on a full charge, which is a significant jump in comparison to the previous generation’s 40-day rating. Charging is still handled by micro-USB, as Logitech was not quite ready to make the jump to USB-C at this time. But notably, especially for Apple’s Magic Mouse users, the charge cable simply plugs into the front (not the bottom), meaning the mouse can be used while charging.

Both models can be connected to your Mac or PC with the included Unifying dongle as well as Bluetooth. Each mouse can still pair with up to three devices at a time with the toggle switch located on the underside.

Both models feature the same adaptive wheel that changes from click-click to hyper-fast scrolling as needed. You’ll also be able to enjoy all of the same customizable buttons that the MX series has become known for in recent years. The larger 2S has a side scrolling wheel as a well as a larger thumb button – the two things that differentiate it from the smaller Anywhere model.

All of these features and tricks are handled by Logitech Options. The brand’s add-on software is the only way to customize actions and tweak settings for the full MX experience. This is a free download for Mac or PC and is an essential part of capitalizing on the feature set here.

Today’s big news from Logitech centers around its new Flow software functionality. In examining the marketplace today, Logitech noted that many of its users had two devices in their arsenal. That was often a desktop machine and a laptop. Even further, many users would have both devices up and running at the same time.

In response to that trend, Logitech is introducing Flow software. This feature allows users to control three devices simultaneously without needing to flip a switch or toggle any software. Quite literally users can ‘flow’ from one screen to another just like a second monitor experience. Furthermore, Logitech Options (which must be installed for this function) also acts as clipboard that can copy and past content and images from one machine to another. The only requirement is that each device must be connected to the same Wi-Fi network to activate this feature.

Today’s MX Master announcements, along with the M585 Multi-Device and M590 mice are compatible with this feature. The Logitech K780 Keyboard can also be used to leverage the copy-and-paste functionality as well. As long as Logitech Options is actively running, copying and pasting between devices is largely the same as you have previously experienced on a single Mac or PC.

The MX Master line has had one of the best consumer input device experiences on the market for some time. I was rather anxious to go hands-on with its latest release as I’ve been using both of the previous generation desktop and Anywhere models for years. Logitech’s MX Master 2S looks largely the same right of the box. There are a handful of new colors, but overall the ergonomic shape remains, as expected.

I first noticed the differences between the two models when I clicked for the first time. Everything about the MX Master 2S feels tighter. The clicks and scrolls were more exact, with greater feedback than the original model.

One of the biggest changes comes with the higher resolution DPI, which has been upgraded to 4,000 as mentioned above. That’s a 4x increase over the original model and I could absolutely tell a difference in my testing. The main change here is that the optics can detect movements quicker, meaning that you don’t have to go as far to see results on the screen.

MX Master 2S and its little brother, the Anywhere 2s, have the same hyper-fast scrolling wheel that I’ve come to love. It takes a bit of time initially to learn how to best leverage this functionality, but you’ll never go back after fully mastering it. Scrolling through long Twitter feeds is easy, while the side wheel makes navigating timelines on Final Cut Pro a breeze.

The best that I can say about the hardware side of Logitech’s MX line is that they didn’t change too much. Instead of overhauling the physical design for more flash, they took a if it ain’t broke, don’t fix it approach and I sure am glad. Each of the minor hardware updates make the experience better, not different. Kudos to Logitech in this area.

In terms of the new Flow feature, I’m not exactly in the wheelhouse for Logitech’s latest creation. While I do regularly use a MacBook and iMac throughout the day, I do not operate them simultaneously. Therefore, it was a neat add on for me that worked quite well in my testing but not a “game changer” per se.

But I gave this mouse to a colleague’s wife who uses a PC for work and a Mac at home. Seamlessly working between the two machines and being able to open work files on the Mac blew her away. I’m still trying to get the MX Master 2S from her but I’m not optimistic I’ll pry it back again.

The good news is that Flow worked quite well in all of the testing we threw at it. There weren’t any odd hiccups or unable to connect messages. One particular problem with the original MX Master was that it would drop off on the new Touch Bar MacBook Pro when also paired with my Bose QC35 headset. No such problems here.

As I mentioned above, the best thing that Logitech did here today was not releasing a radical new design. The new MX Master 2S and Anywhere 2S are an upgrade to the best mice available on the market today for most consumers. In comparison to the Apple Magic Mouse, both of these models are far more comfortable to use for extended periods of time and have far greater battery life. Without a doubt, I’d recommend picking up either one as a full-time solution for your workspace.

Flow software will either be a neat gimmick for some people but a radical game changer for those who work across 2 Mac/PCs. For those that do, These mice are no brainers.

The Logitech MX Master 2S is available for purchase today at $99.99 from Amazon and direct from the manufacturer, while the mobile-friendly Anywhere 2S sells for $79.99.

LAUSANNE, Switzerland and NEWARK, Calif. — June 1, 2017 — Today Logitech (SIX: LOGN) (NASDAQ: LOGI) announced Logitech Flow, a groundbreaking new software that allows you to seamlessly control up to three computers with one mouse. The software is compatible with Logitech’s next-generation flagship mice, the Logitech® MX Master 2S and the Logitech MX Anywhere 2S, designed for those who need advanced multi-device connectivity and precise sensor accuracy in a stunning design.

“One computer used to be enough, but we’ve moved into an era where roughly one in 10 people are working across multiple computers at the same time,” said Anatoliy Polyanker, global portfolio and brand director at Logitech. “Using multiple computers can help you avoid distractions and speed up processor-intensive operations, but working across multiple computers can be a hassle. That’s where Logitech Flow comes in. With Flow and a new MX mouse, you can enhance your productivity — for instance, copying and pasting files from one computer to another — helping you become more precise and focused in the multi-computer world.”

With Logitech Flow, available as a free download as part of Logitech® OptionsTM software, you can take multi-computer use to a new level. With the MX mice, you can seamlessly control up to three computers with one mouse, and even copy and paste content, images and documents between the three computers. Logitech Flow is easy to set up, and has a simple user interface.

The Logitech MX Master 2S and the Logitech MX Anywhere 2S feature an improved DarkfieldTM High Precision tracking, which boosts the mice cursor speed, accuracy and increases the resolution to 4,000 DPI so you can have the most versatile mouse at all times, no matter what screen you are using.

The mice also track on any surface – even glass – so you get flawless control and  have an improved battery life, with a rechargeable battery that lasts for up to 70 days on a full charge, depending on usage. And when you do need to recharge, it’s fast and easy.

The Logitech MX Master 2S has a speed adaptive scroll wheel that auto-shifts from click-to-click to hyper-fast scroll, so you can scroll through long documents or Web pages with ease. Plus, you get side-to-side scrolling with a thumb wheel, and can customize additional functions with Logitech Options. The Logitech MX Anywhere 2S has a precision wheel, which lets you switch between click-to-click to hyper-fast scrolling.

Both mice are crafted to fit your hand. The Logitech MX Master 2S supports your hand and wrist in a comfortable and natural position, while the Logitech MX Anywhere 2S provides comfort and control anywhere you need – at home, at work or on the go.

The new mice are expected to be available in June at Logitech.com and select retail stores. The Logitech MX Master 2S are priced at $99.99, and the Logitech MX Anywhere 2S for $79.99.