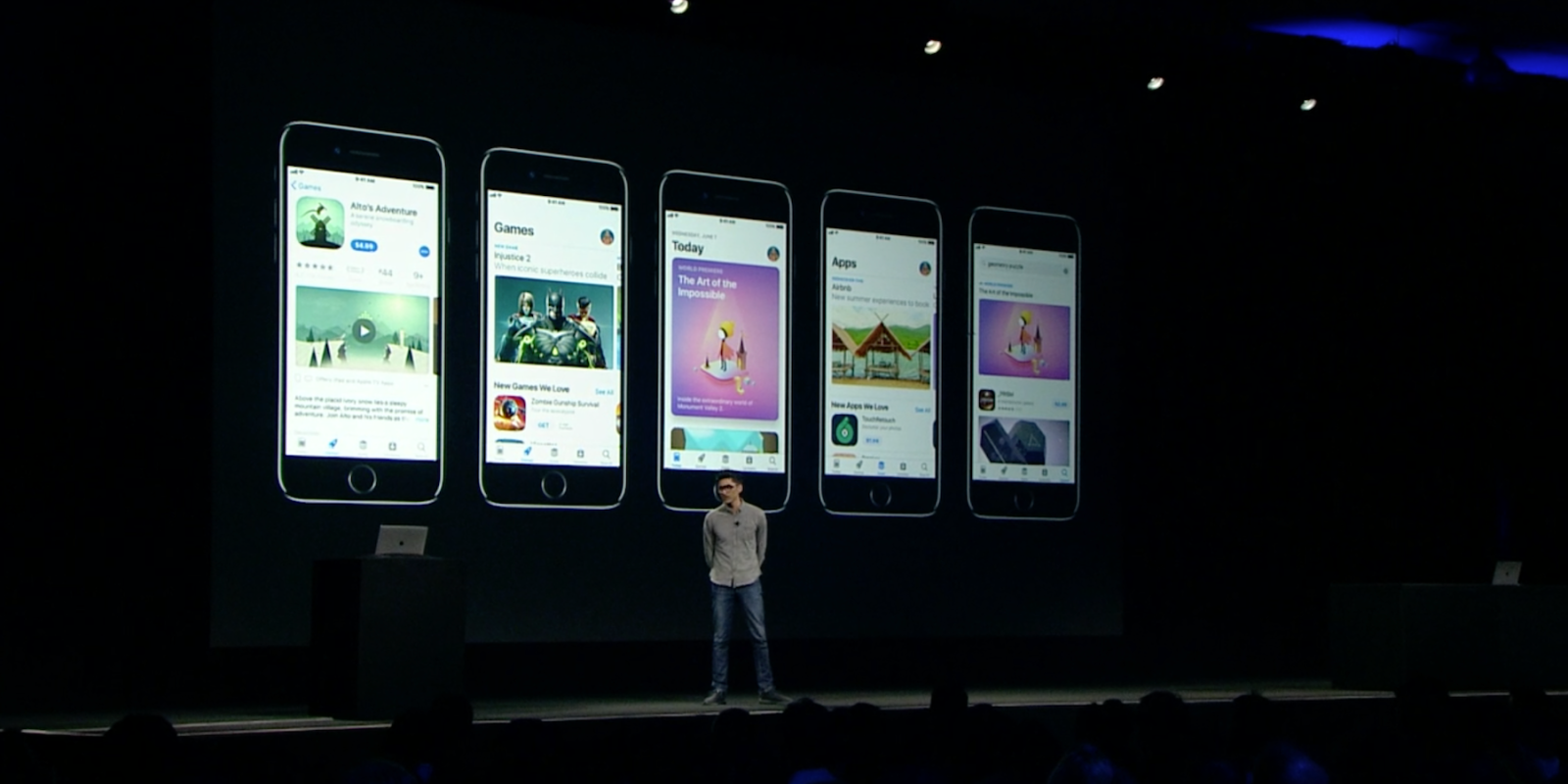 The App Store is getting a big redesign with iOS 11, and today Apple gave a preview of some of the new changes coming for developers at WWDC 2017. Head below for a first look at the refreshed app including new editorial content and features coming with iOS 11 this fall:

The redesign makes the app fit in better with some of the company’s more recent offerings– it borrows a lot from Apple Music with its large fonts and overall aesthetics– and also takes care of a lot of house cleaning in the process.

In addition, Apple is planing for a lot more in-depth editorial content with the new approach alongside a number of smaller tweaks that should make the store better for both developers and users. This is what it looks like:

The new app has 5 tabs: Today, Games, and Apps are the three new tabs for discovery in the redesign and the place where you’ll find Apple’s curated lists and editorial content. Those are followed by Updates and Search tabs for quick access to those functions the same as the current design.

The Games and Apps tabs will present new apps selected by the store’s editors as well as resurface older apps you might have not used in a while. The Today tab will be the main place to find the rest of Apple’s new editorial content that will include a number of regular installments for things like how to’s, interviews with developers, and longer form write-ups on games and features…

Apple has an increased focus on its editorial vision for the App Store and it will be sharing longer form content from its editors for a number of different categories as part of the approach.

Joining Editor’s Choice picks, for example, Apple will have new App of the Day and Game of the Day selections: 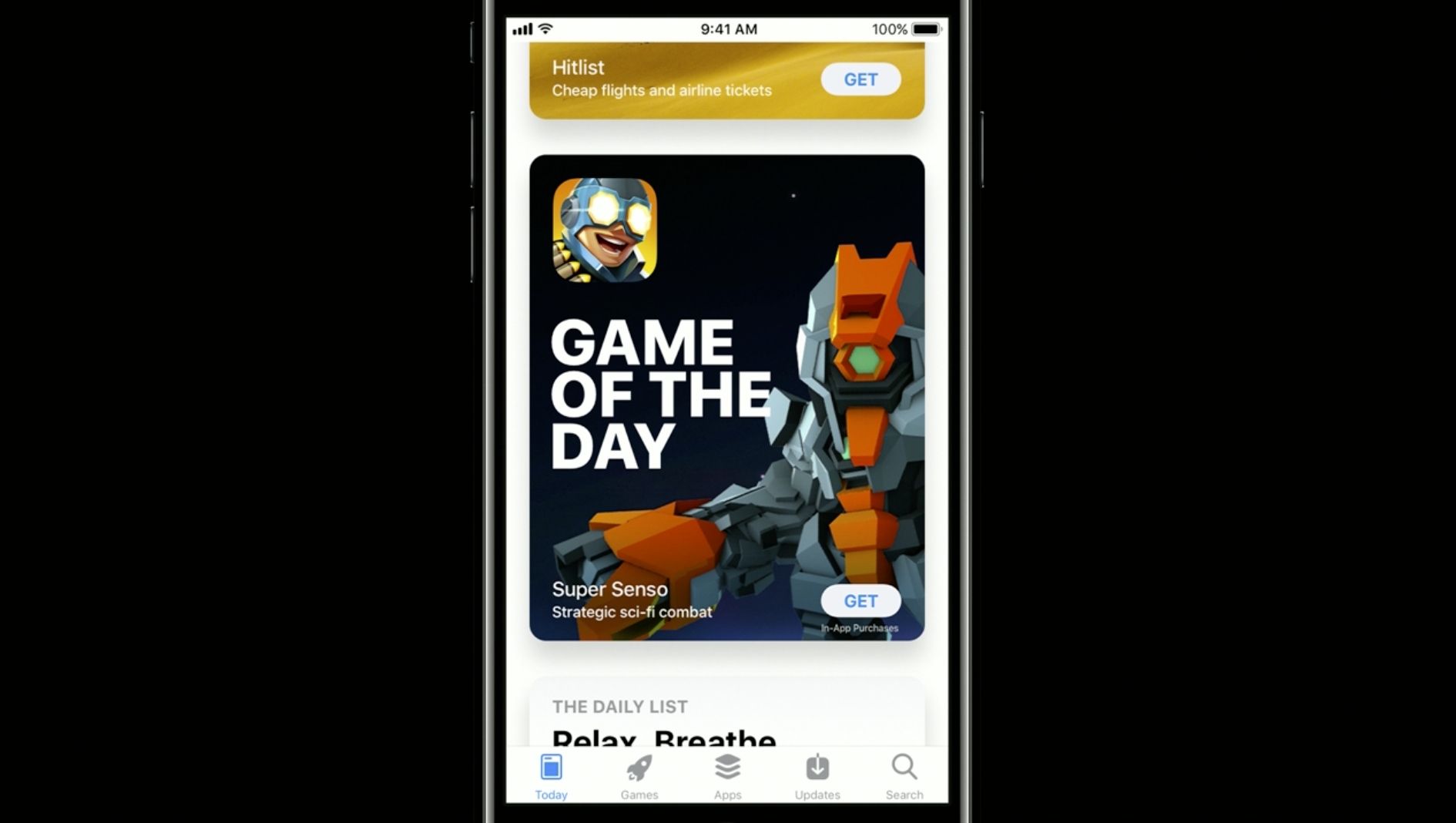 But Apple will have a lot of new editorial content beyond quick app recommendations, world premieres, sneak peeks, and “best of” style lists that it already had a lot of on the current store…

Some of the longer form content you’ll find on the new App Store includes instructional content that falls under the following categories: How To, The Basics, Life Hack, Pro Tip, Deep Dive, and DIY. 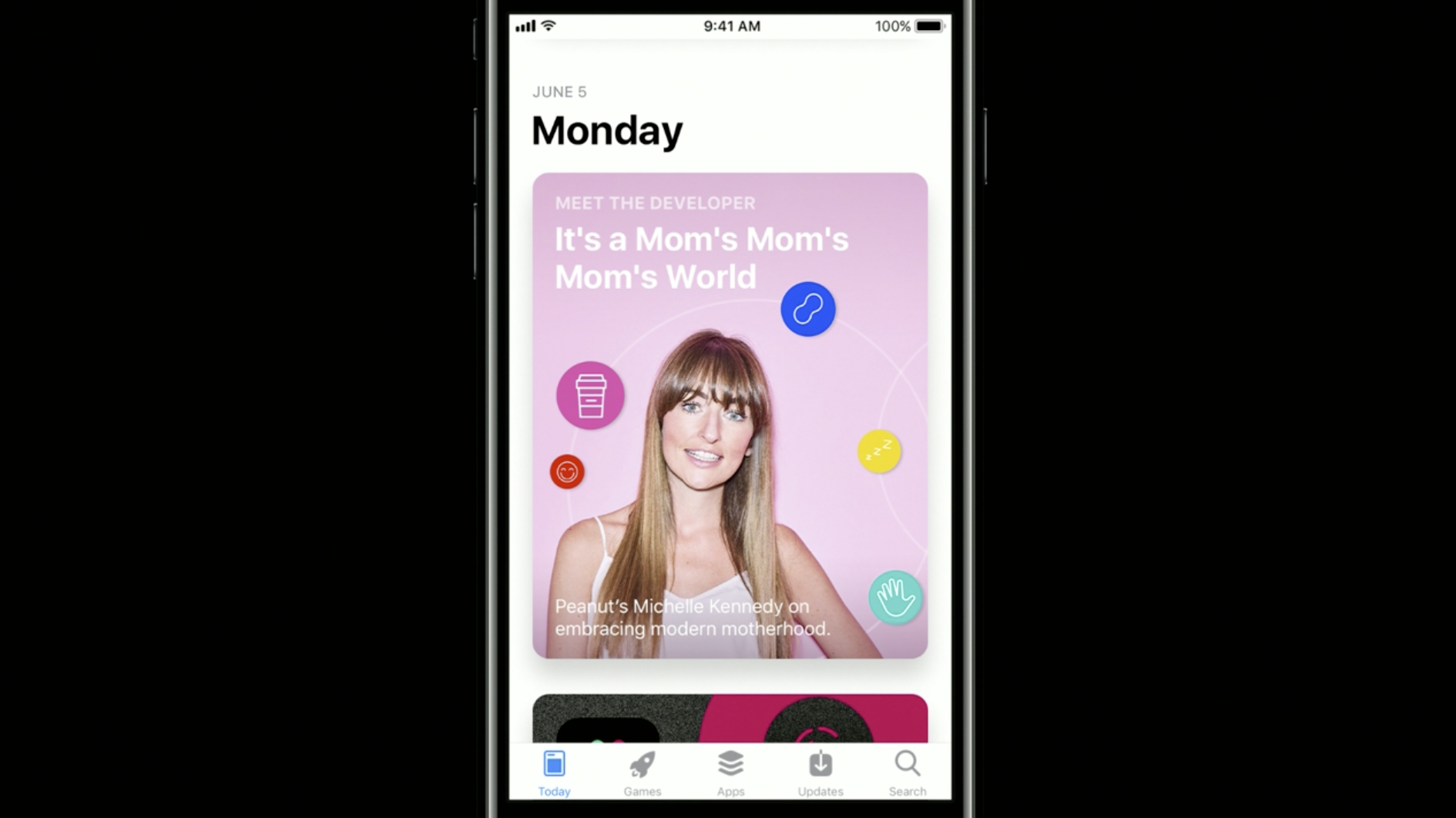 The App Store editors will also be doing more feature content with a handful of regular series that will appear on the store, including: Meet the Developer, Behind the Scenes, Making a Difference, What’s on My iPhone, Apps I love, and Love Letter.

Apple is asking developers to submit their stories and give them notice of notable new apps and feature updates for possible inclusion in an editorial piece. Developers can submit info to the team on Apple’s dev site here.

If you are launching a new app or game, releasing a significant update, or have a great story idea for Today, we want to hear about it. To be considered for featuring on the App Store, please let us know 6-8 weeks in advance. 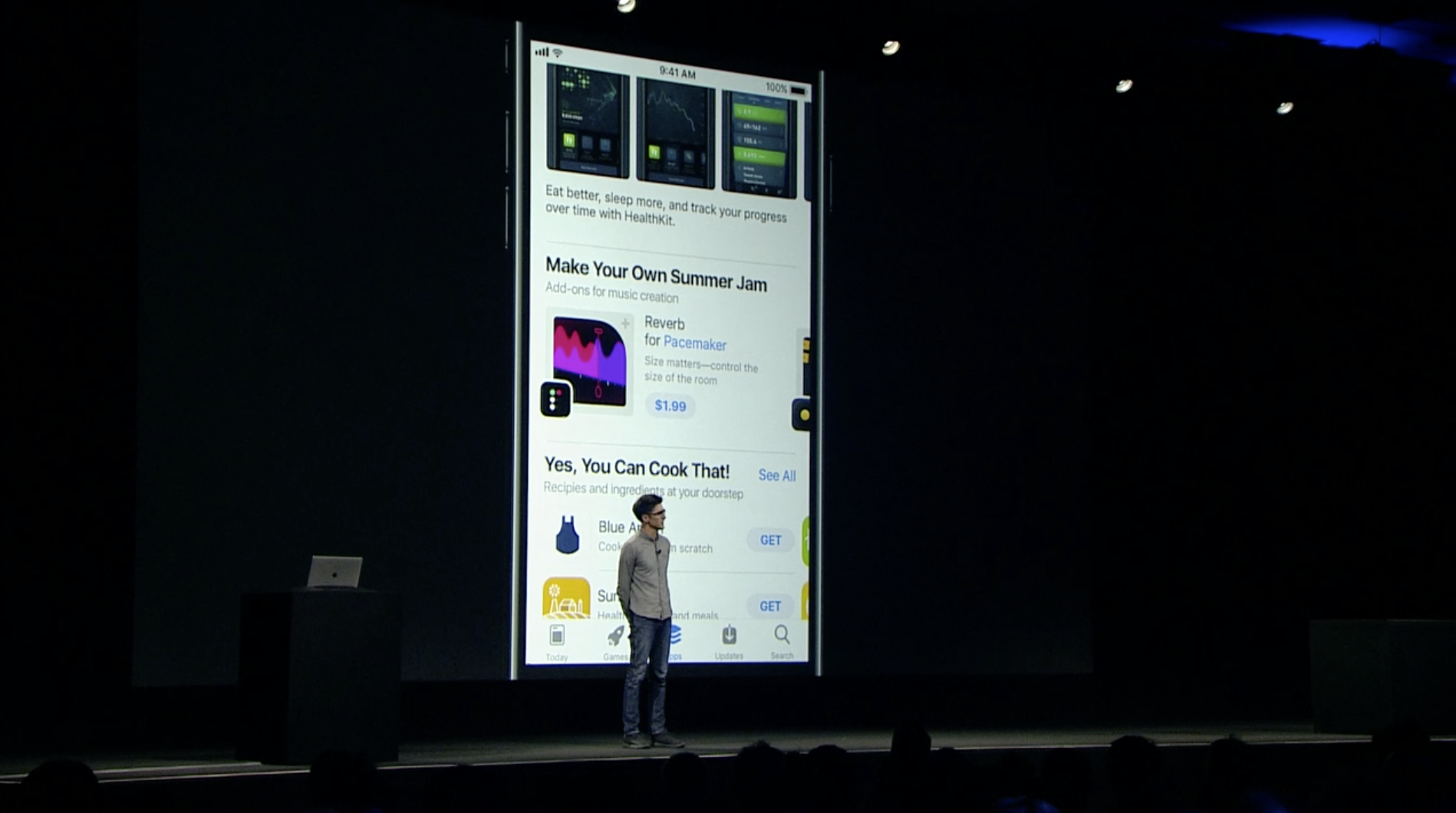 In-app purchases will get a lot more attention in the App Store redesign in an effort to better promote the content that is currently buried only on an app’s main product page. Apple will now surface notable in-app content in the main sections throughout the App Store and promote it just like an app or notable update (as pictured above).

Editor’s choice badges will now appear directly on product pages, which also get new 30 second long auto playing preview videos. The auto playing videos will be muted by default and users on a version earlier than iOS 11 and the old App Store design will only see one of the three videos. The product pages are also getting new promo text (pictured below) that developers can change without having to submit an app update: 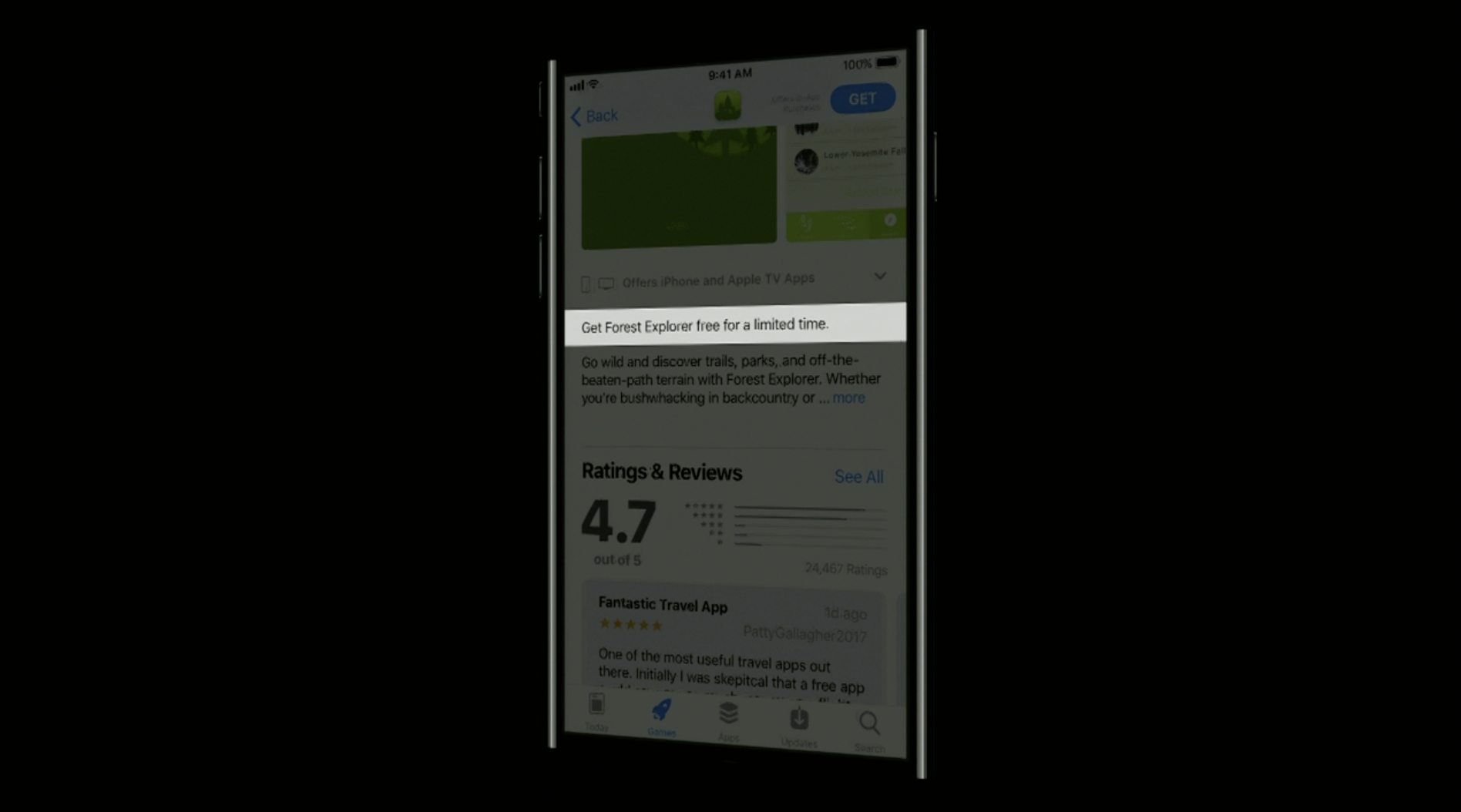 The promo text can be used to promote temporary deals or new content that doesn’t otherwise require an update to the app itself, meaning devs can won’t have to deal with the submission and review process just to promote a new deal or over the air change. The new promo text appears just above the app description on the product page (as pictured above).

Search gets an overhaul as part of the redesign and Apple’s paid Search Ads are still included as you can see in the screenshot above on the right. The Search UI is quite similar to the current App Store with recommended “Trending” search queries listed underneath a search bar. Search Ads will still be present in the redesign as you can see in the image above showing on integrated into the top of a search.

During its presentation of the new App Store at WWDC for developers, the company noted that Search Ads have been performing well with an average 50% tap-to-conversion rate and a $1 CPA.

What about the Mac App Store?

Apple’s Phil Schiller indicated this week that the iOS redesign was just the first step and that work on the Mac App Store will come later.