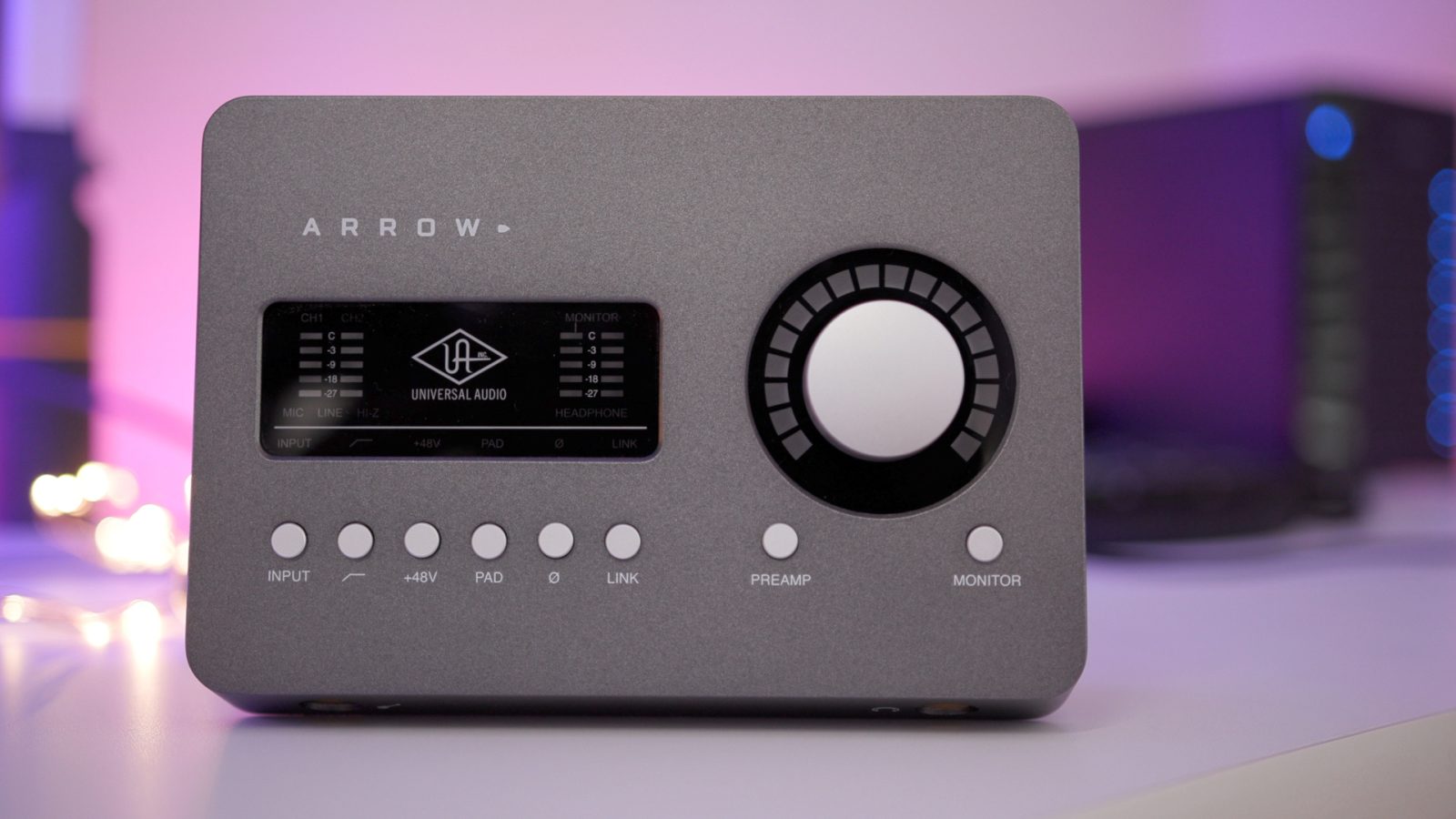 Last week, Universal Audio announced a new entry-level audio interface, the UA Arrow, that’s positioned just below its popular Apollo Twin interfaces. The UA Arrow, like other interfaces that the company makes, can provide your recordings with the tone and feel of a traditional analog recording. The Arrow is an interesting product for several key reasons, headlined by its support for bus-powered Thunderbolt 3, a first for Universal Audio.

Is the Arrow worth considering if you’re in the market for a portable audio interface for your iMac or MacBook Pro? Watch our hands-on video for our first impressions.

As I mentioned in our initial post about the UA Arrow, my trusty Onyx Blackjack from Mackie was on its last leg. Mackie’s mixer served me well, but I’ve long been aware that better products exist that result in better sounding audio.

Universal Audio’s products, like the Apollo Twin, have long been on my radar, but I could never convince myself to make the jump, especially since my Onyx Blackjack was still working well at the time. 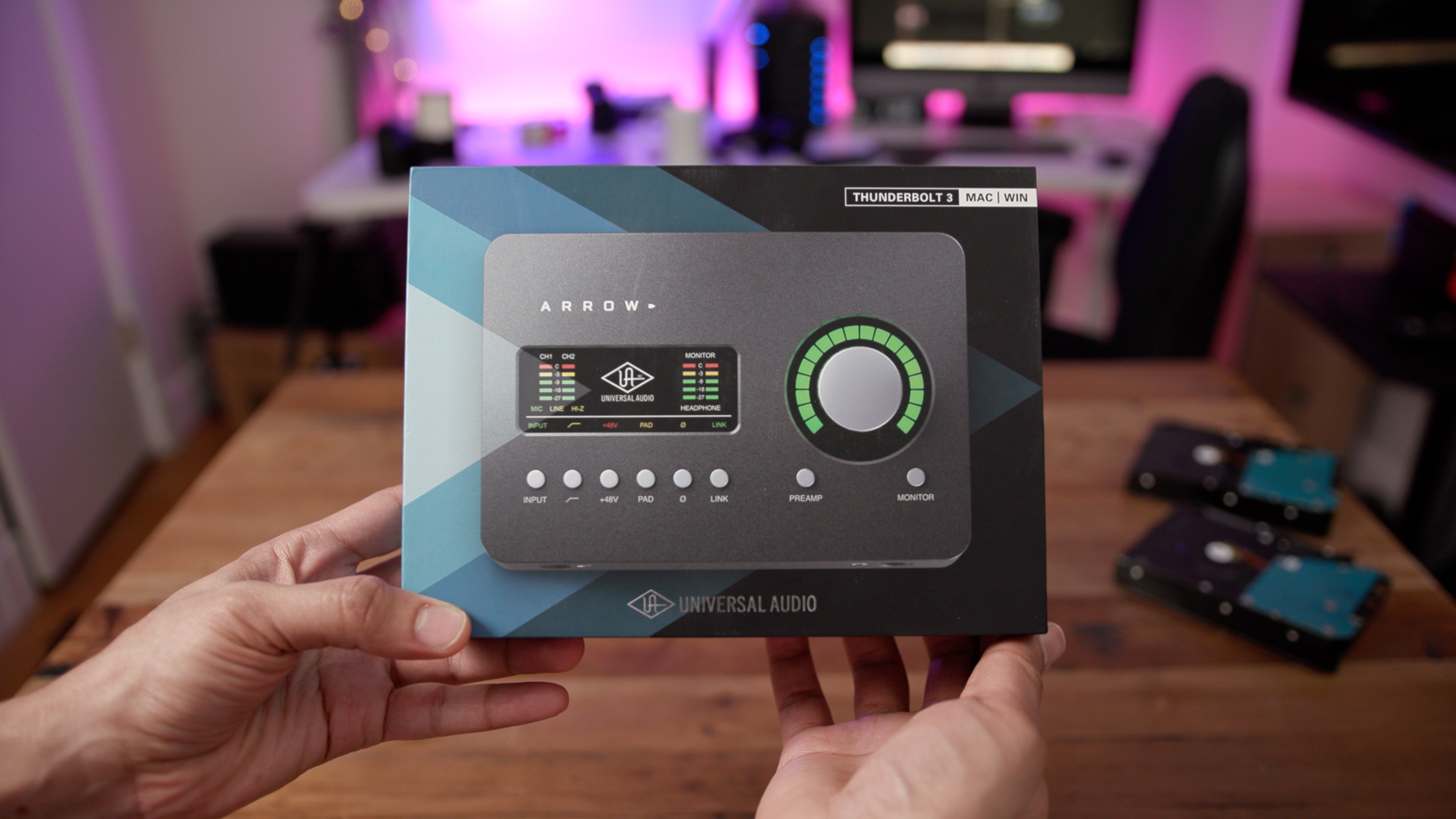 Now that the Blackjack is essentially dead, and the Arrow has arrived at a $499.99 price point, I jumped at the chance to give UA’s entry-level interface a test drive. I have to say that I’m very happy with what I’ve experienced thus far.

The build quality of the UA Arrow is, in a word, solid. One of things that I appreciated about the Onyx Blackjack was its tank-like build quality, and the Arrow isn’t far behind in that regard. As a bonus, the all-aluminum chassis is a space gray color that perfectly compliments the iMac Pro; its simple, streamlined design looks real good sitting on my desk. 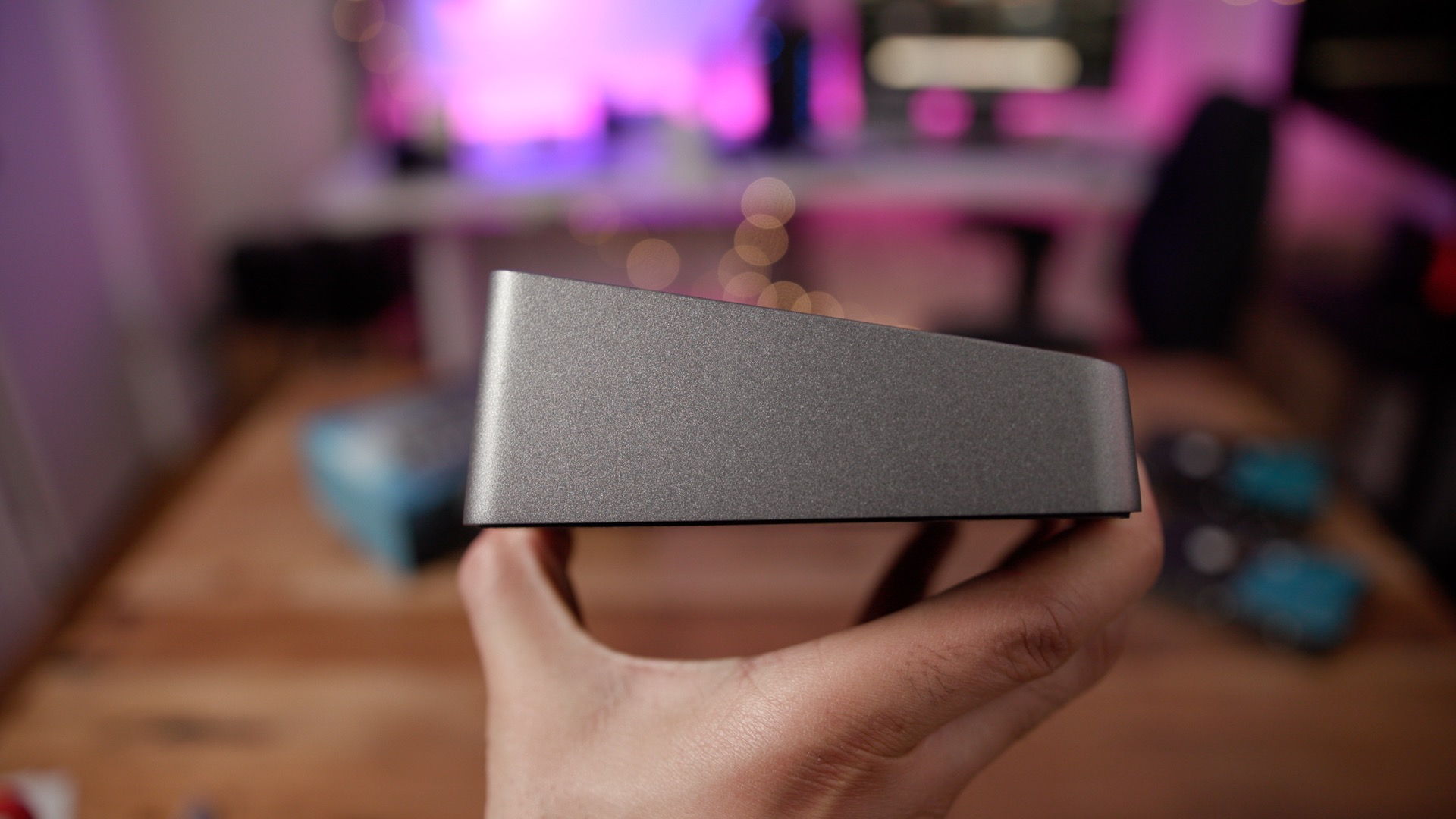 Underneath the unit is a large non-slip surface to keep the Arrow from moving around. This, combined with the weight of the Arrow — around 2 pounds — lends it a stable desktop presence. 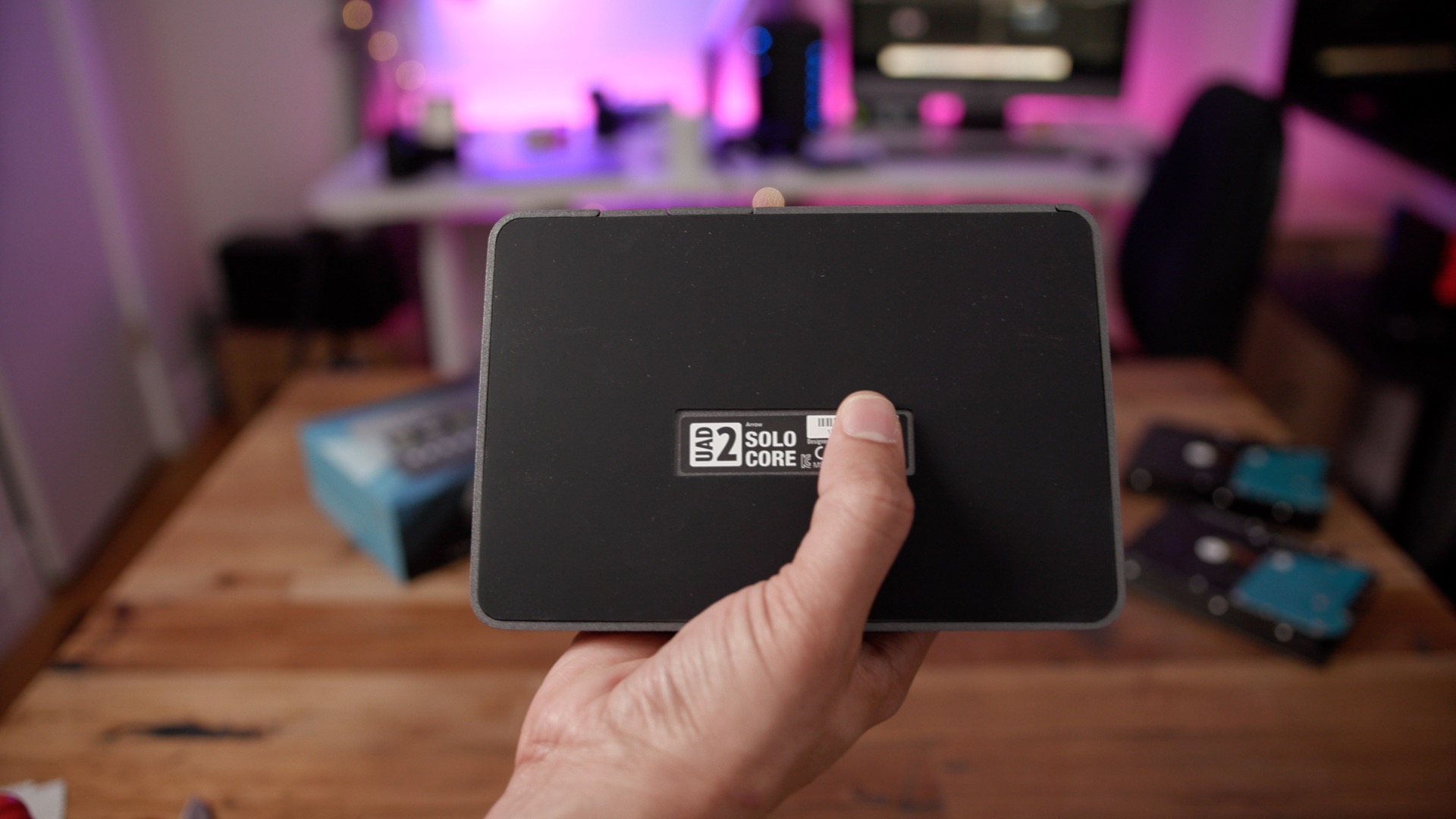 One of the prerequisites that I always have for audio interfaces is that the XLR and monitor inputs must be rear-facing. Some audio interfaces place the XLR inputs on front, resulting in a cluttered look that isn’t very practical for a desk environment. Like the Onyx Blackjack, however, the UA Arrow does the smart thing and places its primary inputs on its backside. 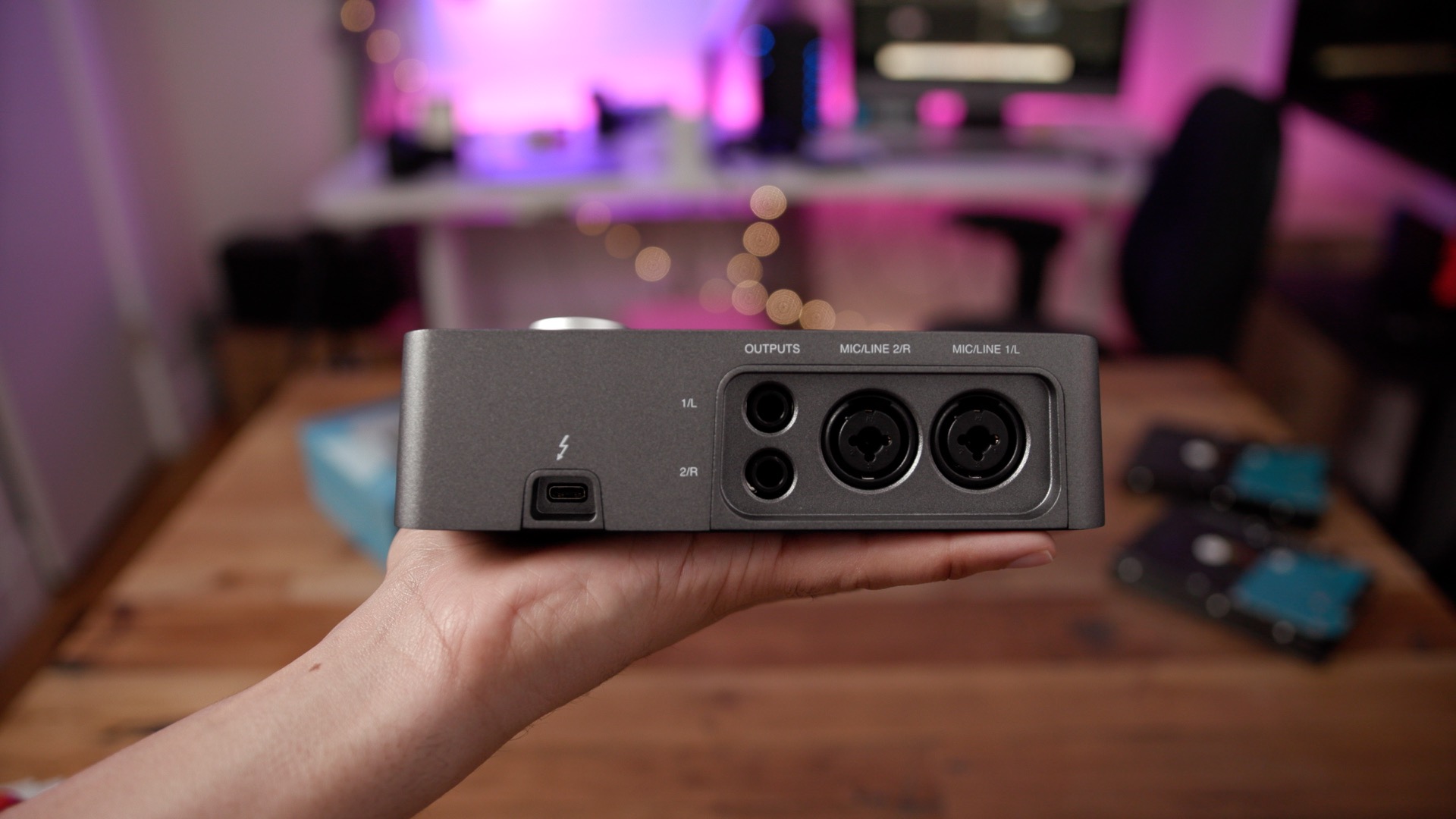 This is the first time that Universal Audio has included Thunderbolt 3 on one of its interfaces, and it’s a welcomed addition. Prior to the launch of the Arrow I was considering the Apollo Twin, but I didn’t like the fact that it was Thunderbolt 2 only. Acquiring the necessary Thunderbolt 2 cable plus Thunderbolt 2 to Thunderbolt 3 adapter adds another ~$85 dollars to the price, and I wasn’t willing to pay that much for an inferior dongle-assisted connection. 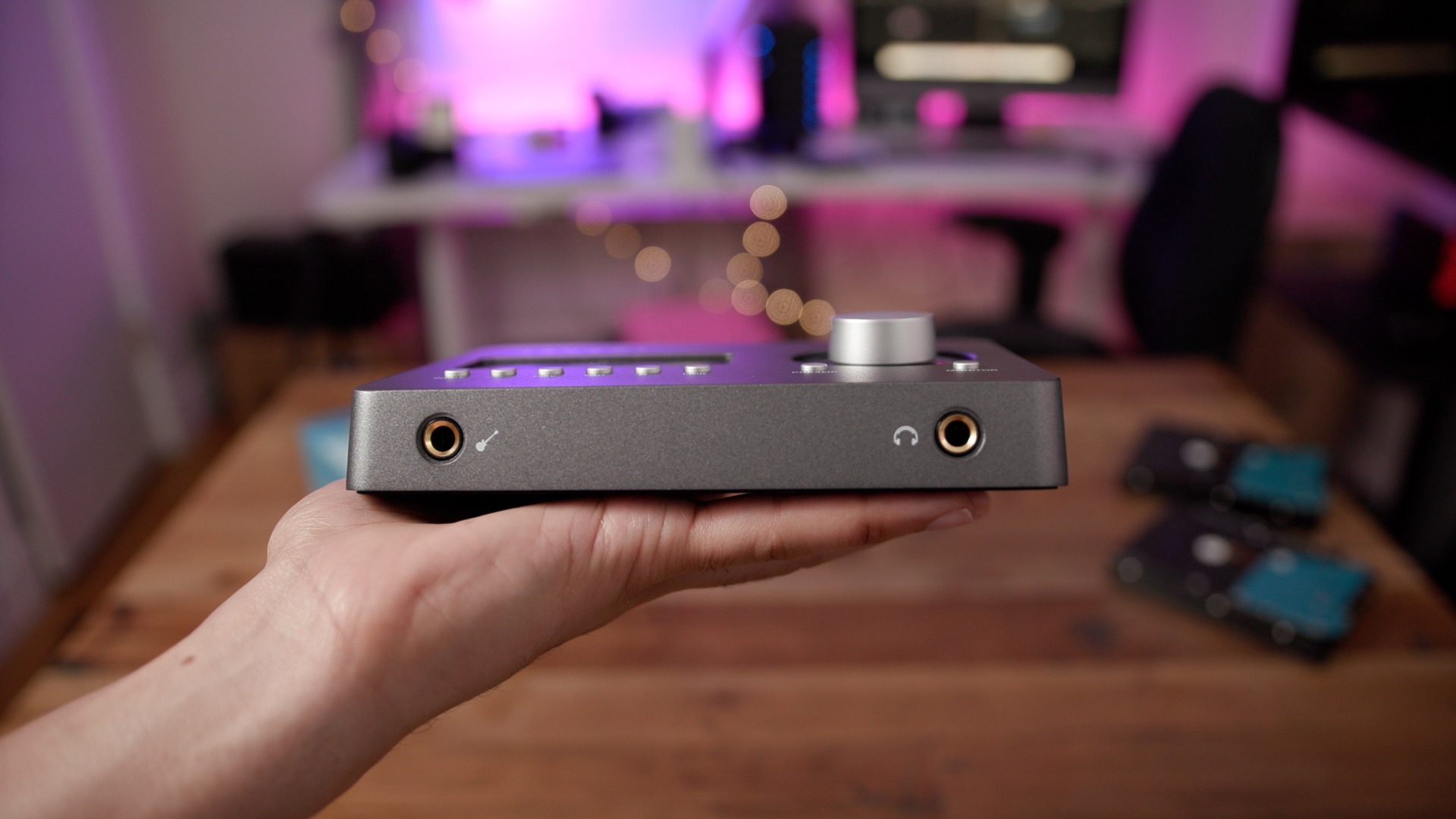 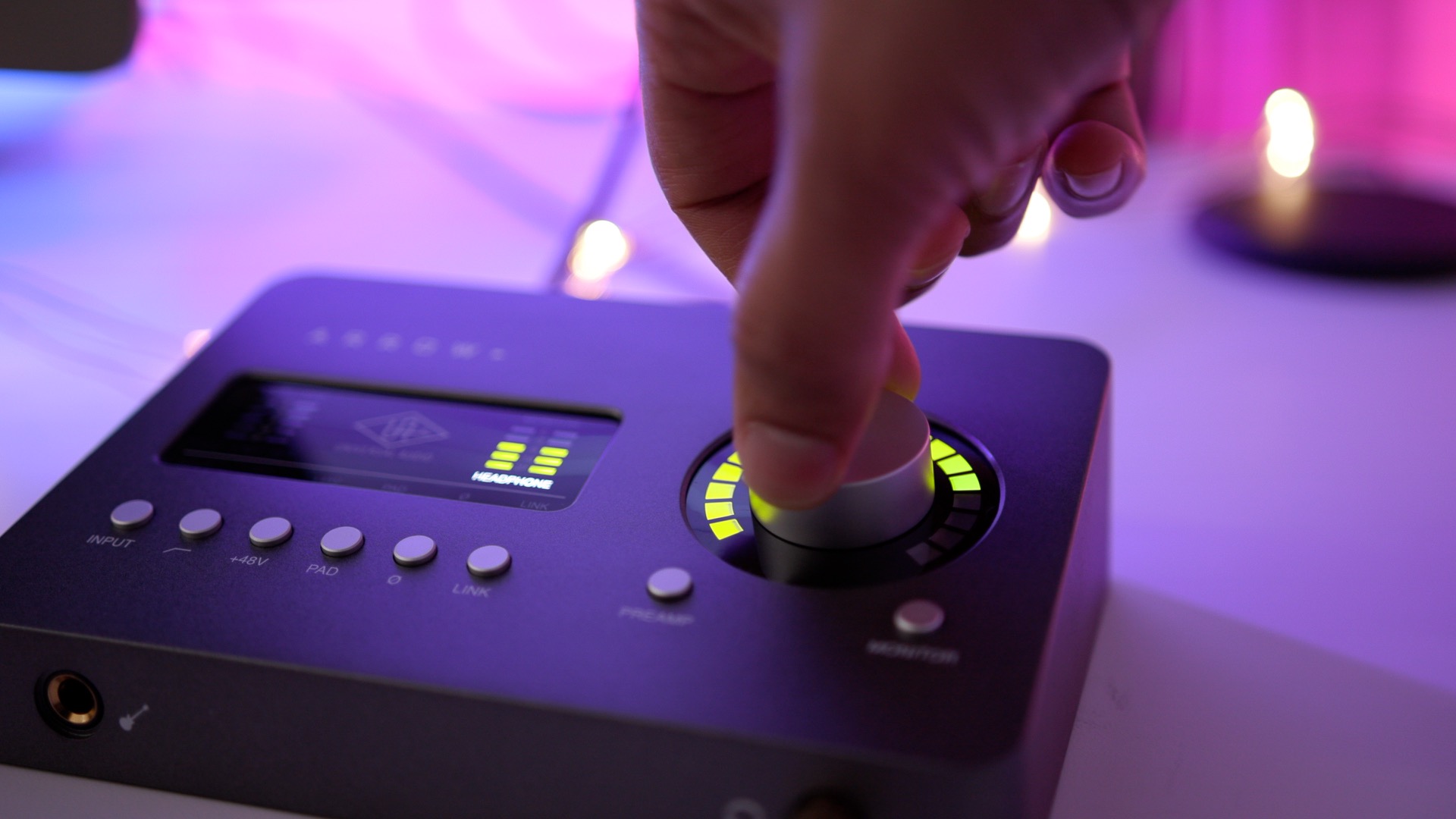 Below the display panel you’ll notice a set of buttons. These dedicated buttons allow you to adjust input, hi-pass filter, phantom power, 20 dB pad, polarity inversion, and step linking. There are also dedicated buttons beneath the encoder wheel to switch between preamp and monitor control. 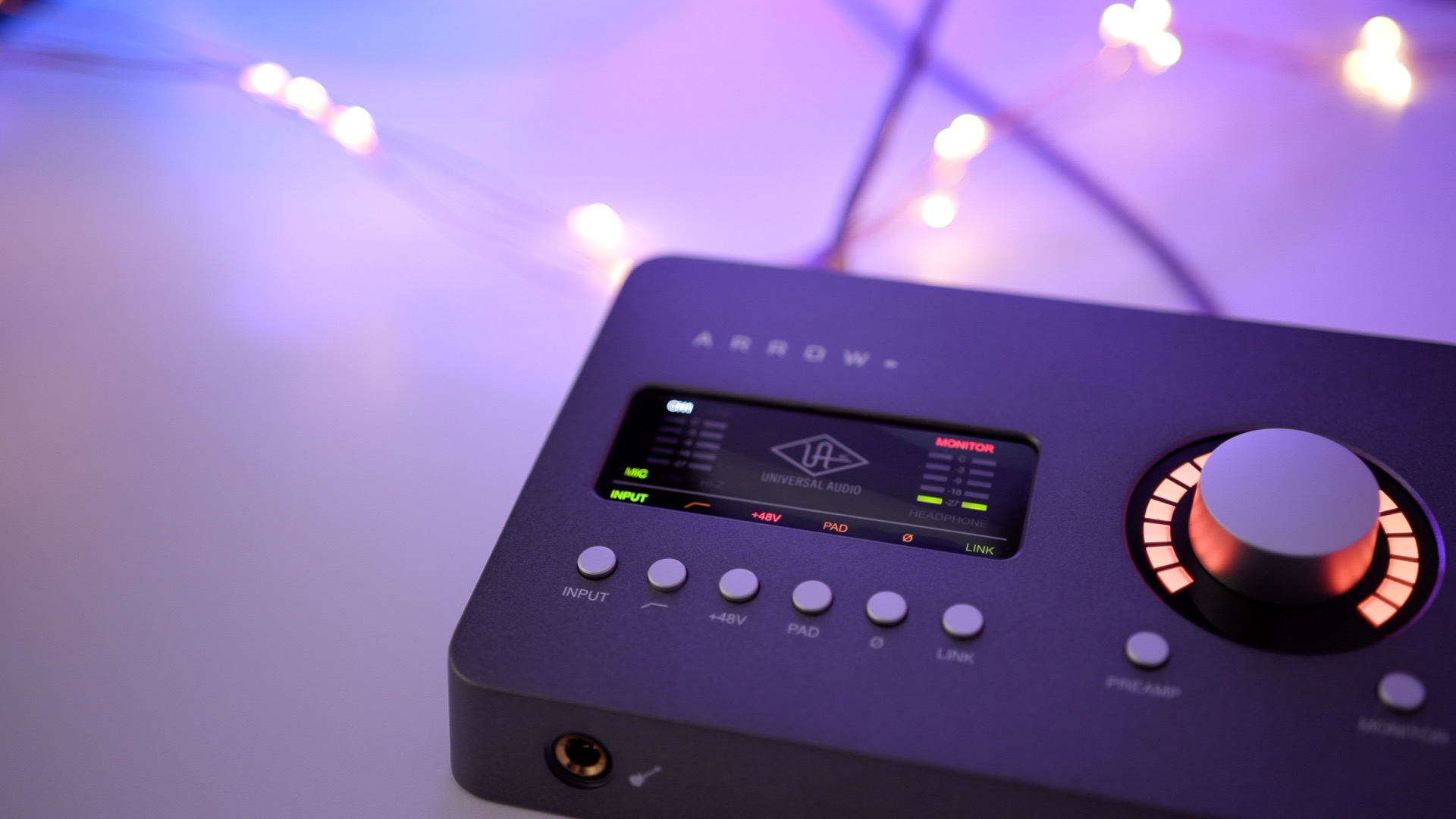 Hardware is just half of the story when it comes to the UA Arrow. Unlike my Onyx Blackjack, and other “dumb” units, the UA Arrow works closely together with its software console to control everything from volume, input, and of course the various UAD-2 plug-ins. 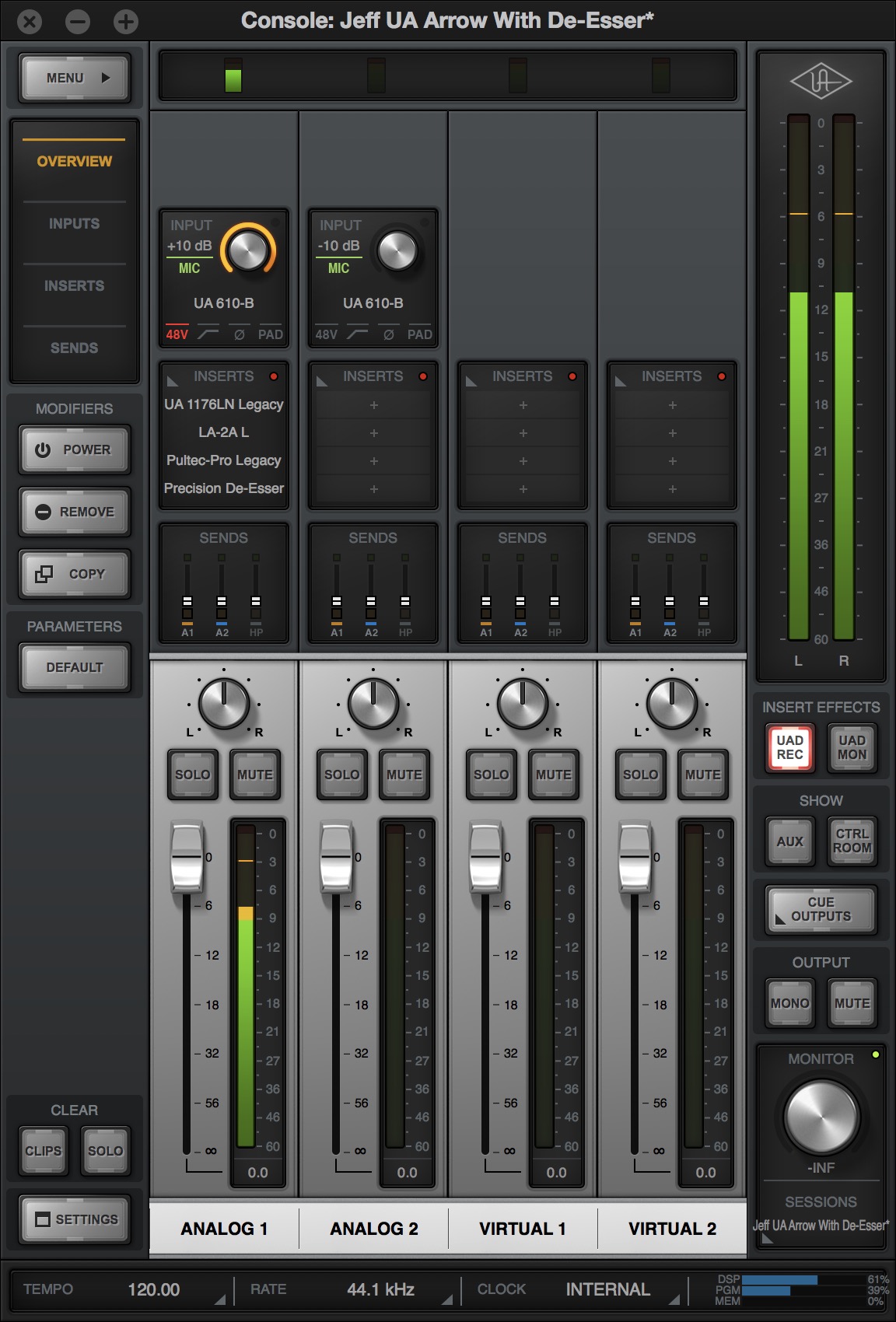 If you’ve ever used a Universal Audio product before, then you understand that the plug-ins are really what make the units special. Plug-ins include compressors, EQs, reverbs, preamp emulations and guitar amp emulations. These plug-ins can be added to your inputs to alter the sound of instruments, including your voice, in real time.

One of the highlights of the UA Arrow are the 14 free UAD-2 plug-ins, which include all of the following:

You can also take advantage of UA’s large library of additional plug-ins, which are available as separate purchases.

Since I primarily do voice work, the included 14 plug-ins are perfect for my needs. I was able to put together a custom sound, one tailored to my voice, by inserting and combining several of the included plug-ins on my microphone input channel inside the console interface. 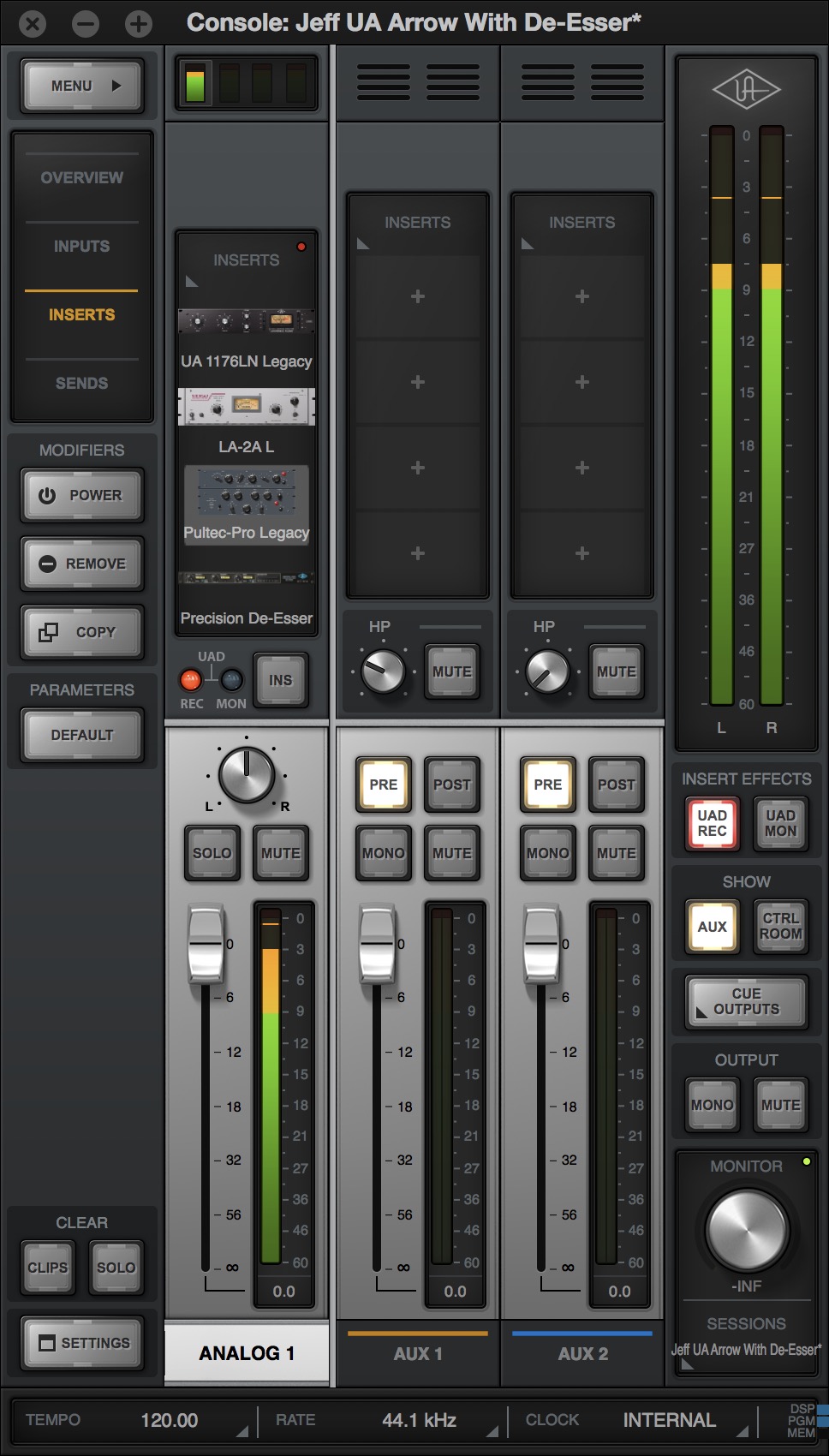 The only other plug-in that I’m thinking about purchasing is the Precision De-Esser. Each paid plug-in comes with a free 14-day trial, so you can test it out before making a commitment.

The Arrow is the most affordable interface that Universal Audio produces, and that comes with its own caveats. The biggest downside to the UA Arrow is that it has a more limited amount of hardware resources than something like the Apollo Twin Quad Duo, for instance. 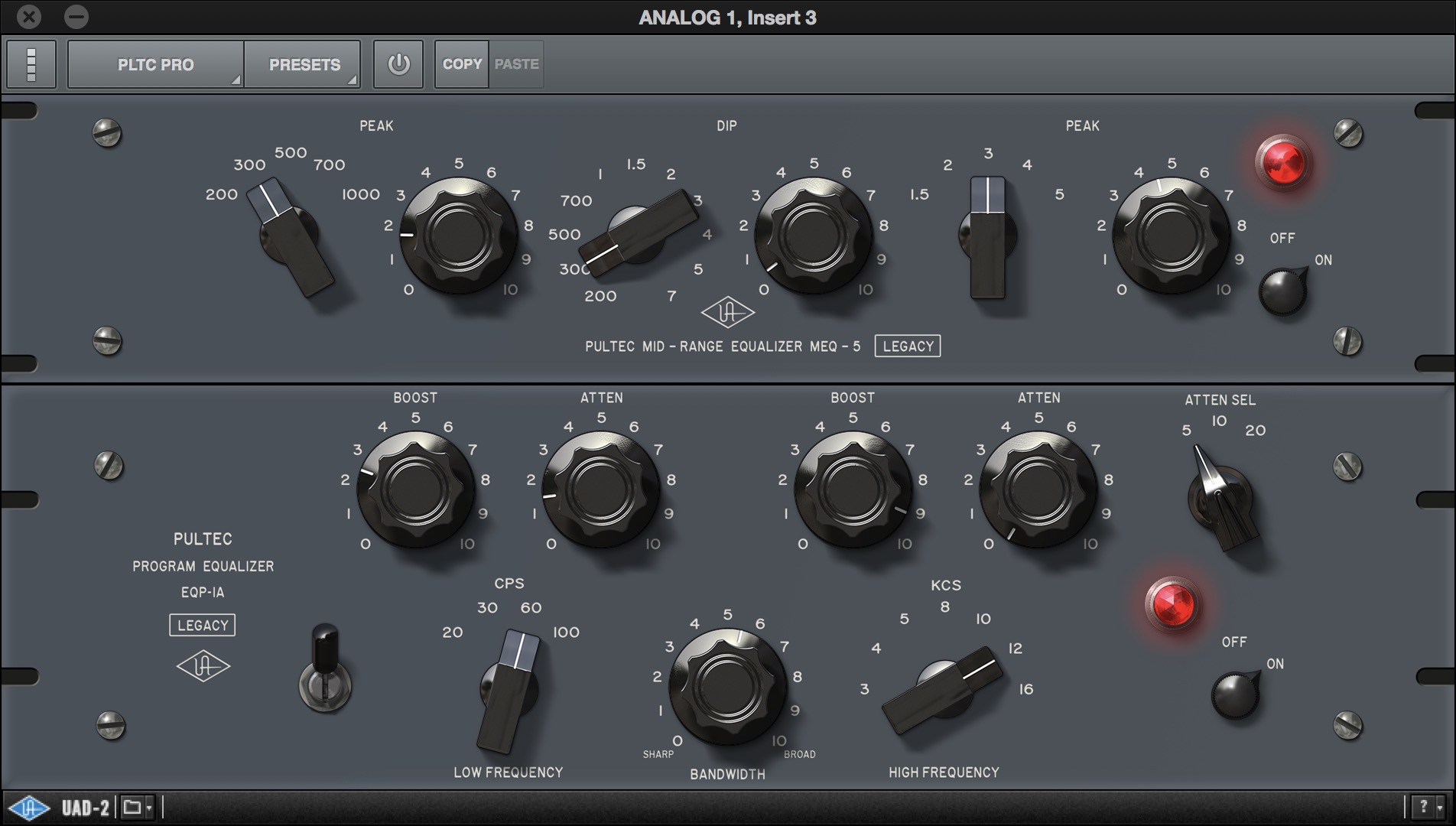 With only a UAD-2 Solo Core DSP, the unit is limited with how many plug-ins it can handle at a time when compared to higher end models. For one-man operations like mine, that’s perfectly fine, as I had plenty of resources left over even after configuring my microphone input with the desired plug-ins. Others, perhaps those in studio environments, or those who plan on using lots of plugins as effects in apps like Final Cut Pro X, will want to take that into consideration. Final Cut Pro X was particularly problematic when trying to use multiple plugins as effects, resulting in out of resource errors.

The good news is that Universal Audio says that you can easily expand the unit’s capabilities by simply adding more hardware in the future.

All of the settings that you configure inside of the Console can be saved, exported and imported, ensuring that you can always restore your settings just in case something gets inadvertently changed, or perhaps you restore your computer.

This is another area that makes a product like the Arrow “smart”, as you never have to worry about accidentally hitting a knob or a lever and totally messing up a good sound that you had previously configured.

As someone who doesn’t really dabble in audio production too much, the scope of these impressions aren’t as deep as you’d get from someone like Jordan or Justin Kahn, as these guys are actual music producers. Yet, I can definitely appreciate the UA Arrow in my voiceover workflow, and I can say that it’s absolutely fantastic for my needs in that area. 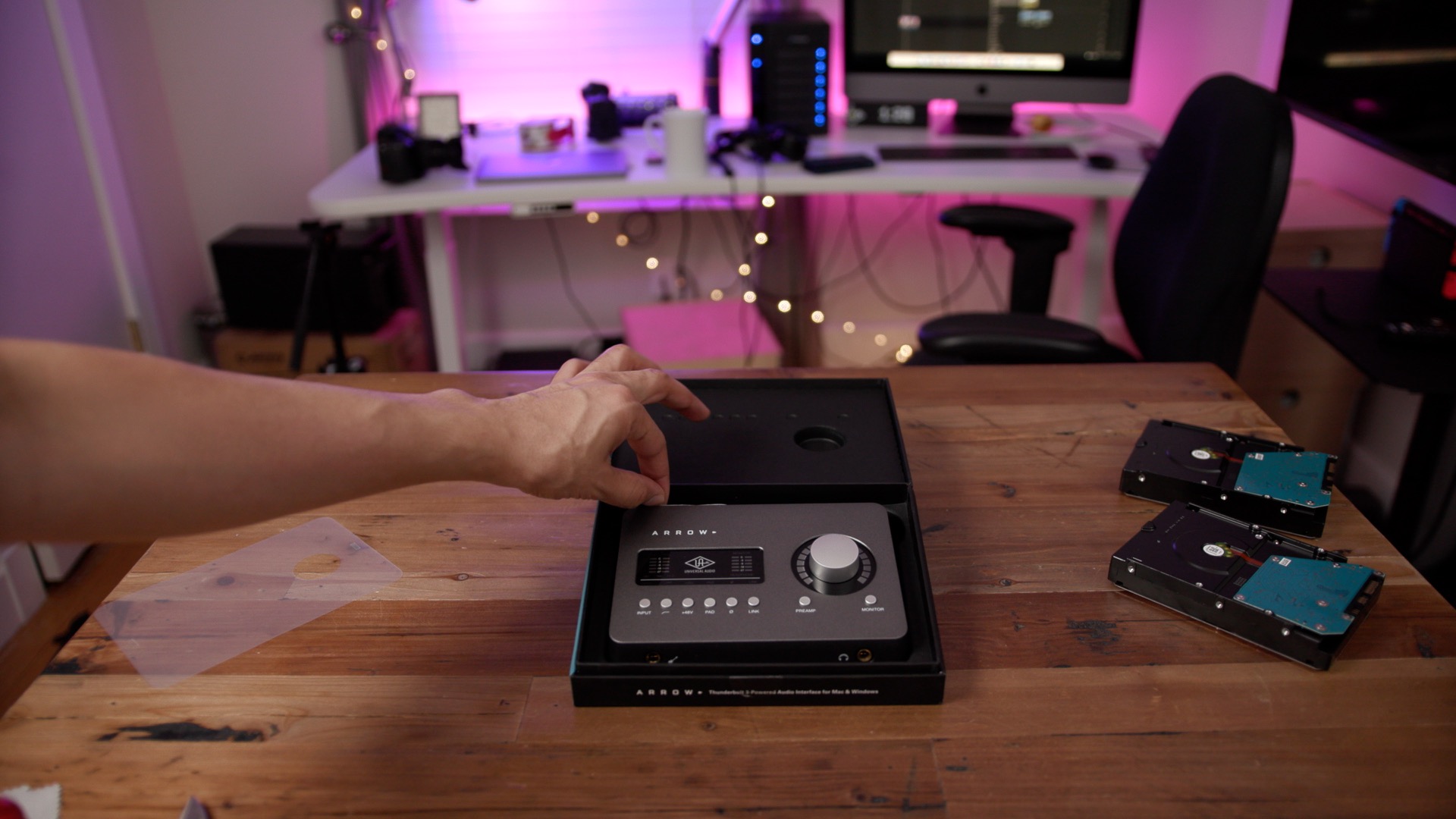 Of course, the Arrow, with its access to the full UA plug-in library goes way deeper than that, and would be a solid addition to general music production workflows as well. I’ll be back with additional impressions of the Arrow in the future, but as of now I can say that this seems like the best-case-scenario for my audio needs on Mac.